Accessibility links
After A Brutal 2012 Rape In Delhi, Student Asks 122 Jailed Rapists: Why? : Goats and Soda Shattered by the rape and subsequent death of a student in Delhi in 2012, a graduate student in psychology wanted to know why they did it — and if they felt remorse. 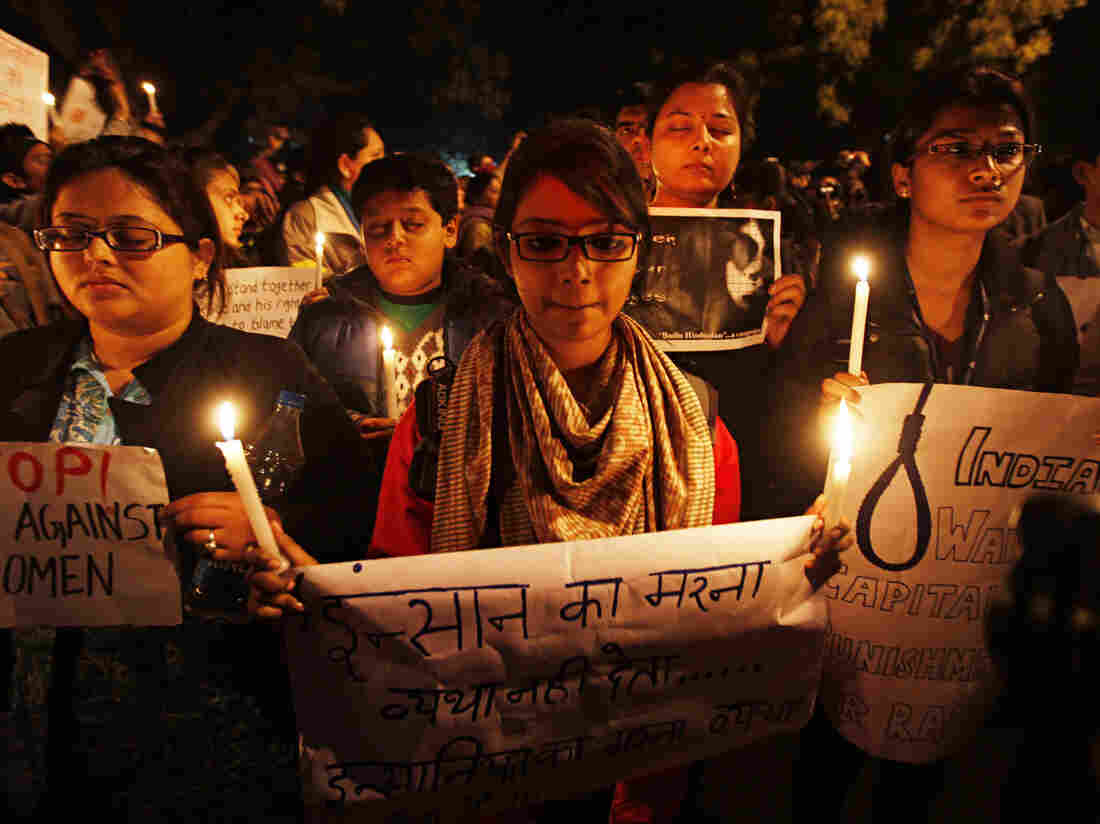 A candlelight vigil in 2013 marks the one-year anniversary of the death of a 23-year-old woman who was gang-raped on a bus in Delhi. Raj K. Raj/Hindustan Times via Getty Images hide caption 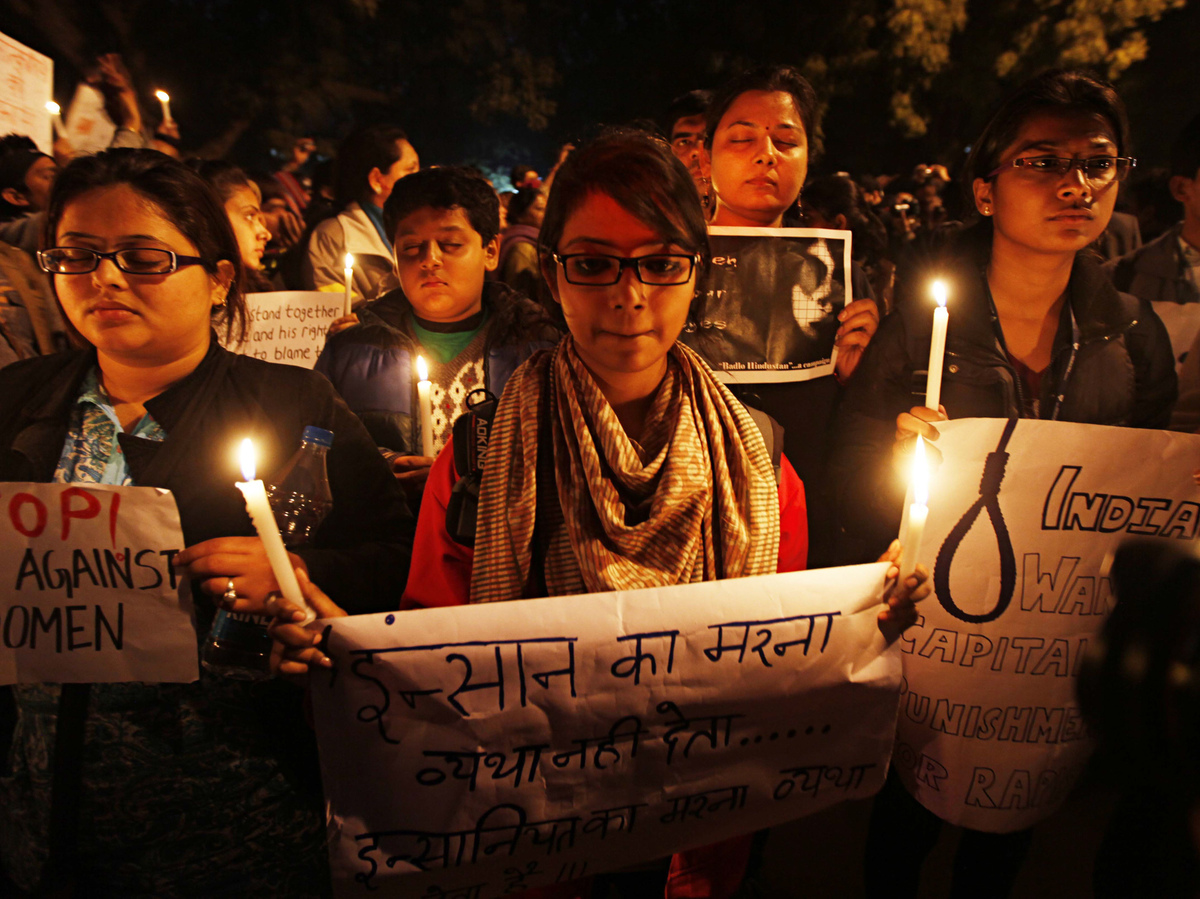 A candlelight vigil in 2013 marks the one-year anniversary of the death of a 23-year-old woman who was gang-raped on a bus in Delhi.

Five years ago, on Dec. 16, 2012, Jyoti Singh, a 23-year-old physiotherapist intern living in New Delhi, was headed home after watching the movie Life of Pi with a male friend. They got on a bus. Six males were on board, including the driver.

In the moving bus, all six assaulted the couple. Singh was gang-raped, and her friend beaten severely.

Singh sustained severe damage to her abdomen and intestines. She was airlifted to a hospital in Singapore for treatment but died from her injuries nearly two weeks later.

Five of the rapists were convicted and sentenced to death. The youngest, who was a minor, was sent to a reform facility for three years and later released. One of the rapists died in prison under mysterious circumstances.

For Madhumita Pandey, who was then completing her master's degree in clinical psychology at Bangor University in North Wales, news of the attack was overwhelming.

"It was heartbreaking and I was outraged," she says. "I had always seen the city in a different light prior to this." She was aware of how, almost overnight, perceptions of India had changed. Suddenly, it was dubbed the world's "rape capital" — although statistics are problematic. The stigma around rape means that many women do not report it.

More women seem to be speaking up. According to figures released by the National Crime Records Bureau, the total number of rape cases reported in India increased from 24,923 in 2012 to 34,651 cases last year. But experts say the actual figures are likely much higher.

Pandey had a burning need to know what these rapists were thinking.

She decided to ask the rapists themselves.

In March 2013, three months after the attack, Pandey applied for permission to speak to more than 100 convicted rapists in Delhi's Tihar Central Jail. Going by the ethical guidelines set out by the British Psychological Society, she said she would only interview willing participants.

What she hadn't quite anticipated was how eager they would be to share their side of the story — and the mindsets that would be unveiled.

Pandey assigned numbers to each rapist and did not use their names. Her interviews reinforced the views that rapists had a poor opinion of women in general, but their utter lack of remorse came as a surprise to her. One exception was Participant 49. He is a middle-age man convicted of raping a 5-year-old and had served five years when she interviewed him. He said he felt remorse. But it was not the kind of remorse one might expect.

"He expressed his remorse by saying that now that the girl carries the stigma of rape [and thus is no longer a virgin] and would not find a suitable husband; he would repent for his actions by marrying her when he was released," says Pandey. "He didn't realize that this is not what any rape victim would want. His mindset highlighted a very regressive thought that a woman has to be chaste till marriage or else she is damaged goods."

Pandey was particularly interested in exploring myths about rape — inaccuracies or untruths that put blame on the victim. When a woman is out late, unaccompanied, wearing skimpy clothing or seen drinking or partying, there are many who believe that her behavior could lead to being raped. But in the case of Jyoti Singh, the physiotherapist intern, these rape myths were shattered. "She wasn't out very late, she was traveling with a male companion. She was a city girl who knew Delhi well. She was intelligent, educated, dressed modestly. She didn't fall in line with any of these myths and yet was still raped," says Pandey.

In three phases spanning several months, Pandey spoke to 122 men convicted of rape. In addition to her interviews, she asked them to fill out two questionnaires. The Attitudes Towards Women Test would reveal how they felt about women in general, and the MMIS would gauge their cultural understanding of how men should act or behave.

Pandey was not able to discuss all of her analysis or anecdotes because she is currently in the process of defending her doctoral thesis in the criminology department at Anglia Ruskin University. But she did say she saw a pattern of "cognitive distortion" — they had created their own version of the crime that allowed them to justify their actions.

"Mukesh Singh [who drove the bus on the night of the Dec. 12 attack] and his brother Ram Singh are classic examples, with attitudes typical of the rapists I spoke to," says Pandey, who was a consulting psychologist for India's Daughter, a BBC documentary about the rape.

In an interview from jail for the documentary, Mukesh Singh claimed that if Jyoti and her male friend had not tried to fight back, the six males on the bus would not have beaten them so severely. He described the incident as an "accident" and stated that women who went out at night had only themselves to blame if they attracted molesters. Like Singh, the rapists interviewed by Pandey shared a lack of awareness of what consent meant.

In an effort to find out whether other criminals convicted for crimes other than rape were as unrepentant as the rapists she spoke to, Pandey interviewed 65 convicted murderers in the same jail. She found that their attitudes were notably different.

"With few exceptions, the murderers clearly blamed themselves for their crimes," she says. "Whether it was premeditated or an act committed in a moment of irrational anger, they regretted it and realized how their actions had affected other people or destroyed lives. This was not the case with the rapists."

Perhaps, she says, "when you have a dead body, you are far more accountable."

In November 2016, Pandey presented a paper at the annual conference of the American Society of Criminology held in New Orleans, reporting on the different ways in which convicted rapists presented excuses and justifications for their crimes. In her presentation, she look at a sample of "repentant vs. nonrepentant" rapists from her research. In her interviews, she says, "most convicted rapists presented themselves as nonrepentant and attempted to justify their crimes." They told Pandey that the women they raped had no idea how to dress modestly, that their body language was inviting and that all men raped — they were just the ones who were caught.

"On the other hand, men who were repentant believed that their actions were morally reprehensible [but] were a result of extenuating circumstances that could have been avoided, such as alcohol, drugs, bad company," she says.

The chairman of the session where Pandey presented her paper was impressed. "Pandey's research focuses on a greater understanding of incarcerated people, which is in alignment with much of the research being done by the New School of Convict Criminology," says Grant Tietjen, assistant professor of criminal justice at St. Ambrose University in Davenport, Iowa. "Any research of this kind is significant because it provides unique insight into the motivations of a difficult to access or highly stigmatized population, who are often discarded or ignored by mainstream society."

Even though Pandey did not compile statistics about her interviews, he says, her face-to-face observations provide "a valuable resource to the counseling community, policymakers, researchers and legislators when grappling with how to rehabilitate this specific type of sexual offender."

Her study has inspired others in India as well. In Gujarat, professor K. Jaishankar, president of the South Asian Society of Criminology and Victimology, is guiding a doctoral student who has interviewed 55 convicted rapists with the same aim as Pandey's — to find out what motivated them to commit these crimes.

But there has also been a backlash online, with some posters accusing the researcher of supporting rapists. "It's a negative perception that can weigh heavily on the researcher and be a deterrent," says Jaishankar.

"In spite of our disgust at sexual violence and those who perpetrate it, we need to psychologically evaluate the rapist to stop escalating crimes against women," says Pandey in defense of her work.

Painted on the walls of Tihar, amid the artwork and graffiti by inmates, were words that Pandey took to heart: "It is better to light a candle of reform than to curse the darkness of crime."

Kamala Thiagarajan is a freelance journalist based in Madurai in southern India. Her work has appeared in The International New York Times, BBC Travel and Forbes India. You can follow her @kamal_t