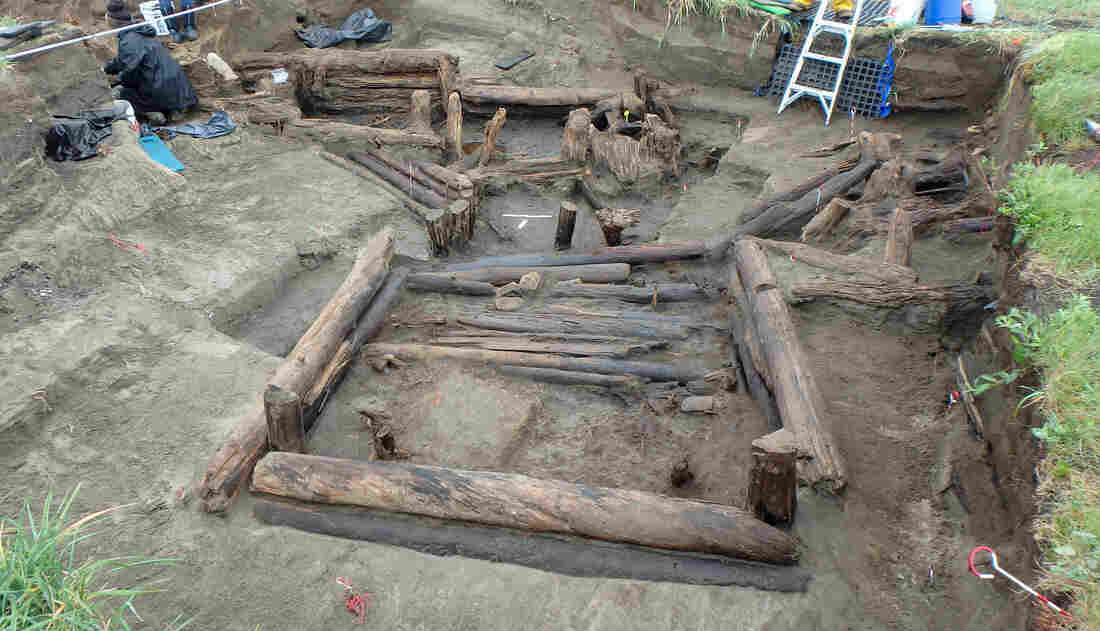 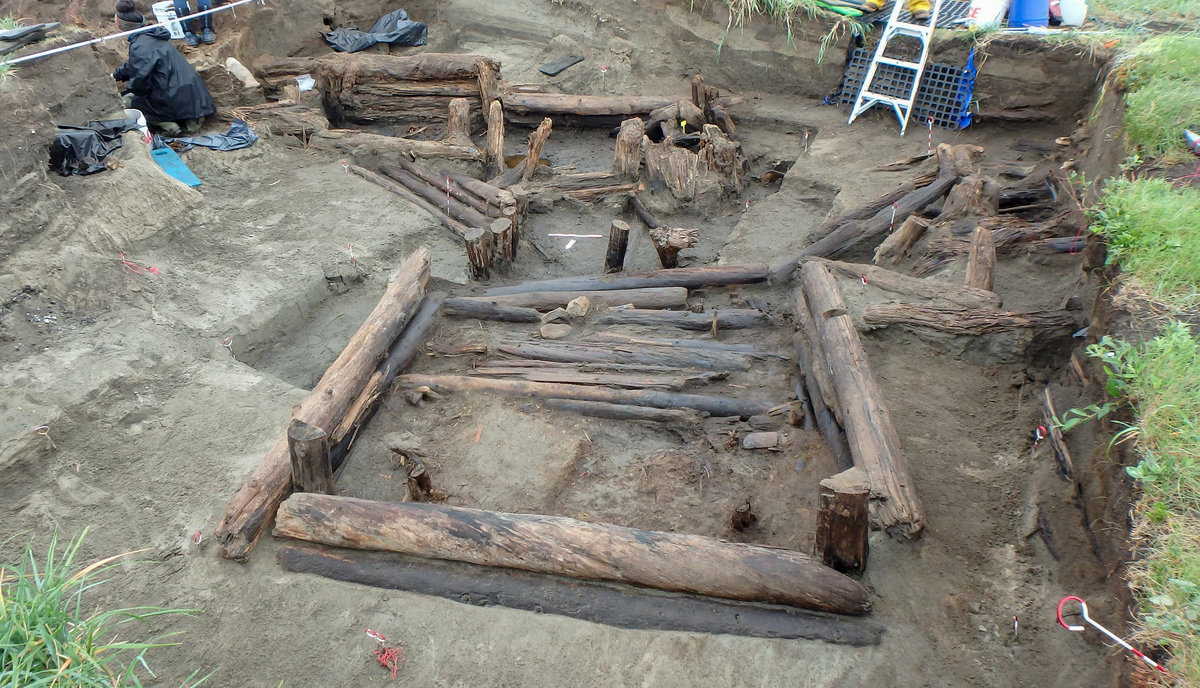 Archaeologists are excavating an ancient cabin at the Rising Whale site.

We're on the Bering Land Bridge, where woolly mammoths roamed 20,000 years ago. Today, the land is covered in bright green grass and miniature shrubs.

But there's something strange — bright white objects jutting out of the ground.

As I walk a little closer with archaeologist Owen Mason, he tells me what they are.

"Right there, that's a whale shoulder blade," Mason says, pointing to a bone about the size of a German Shepherd.

And it's not just bones we see. Looking more closely at the ground, I realize artifacts are scattered all around us.

"Right here, that's an ulu knife," he says, as he picks up a flat piece of stone. "It's a specialized knife for cutting animal flesh. It's about 300 years old."

There's a piece of a sled runner, a fragment of ceramic, even remnants of ancient cooking oil.

Buried underneath this tundra is a secret seaside neighborhood, preserved in frozen soil for 1,000 years. 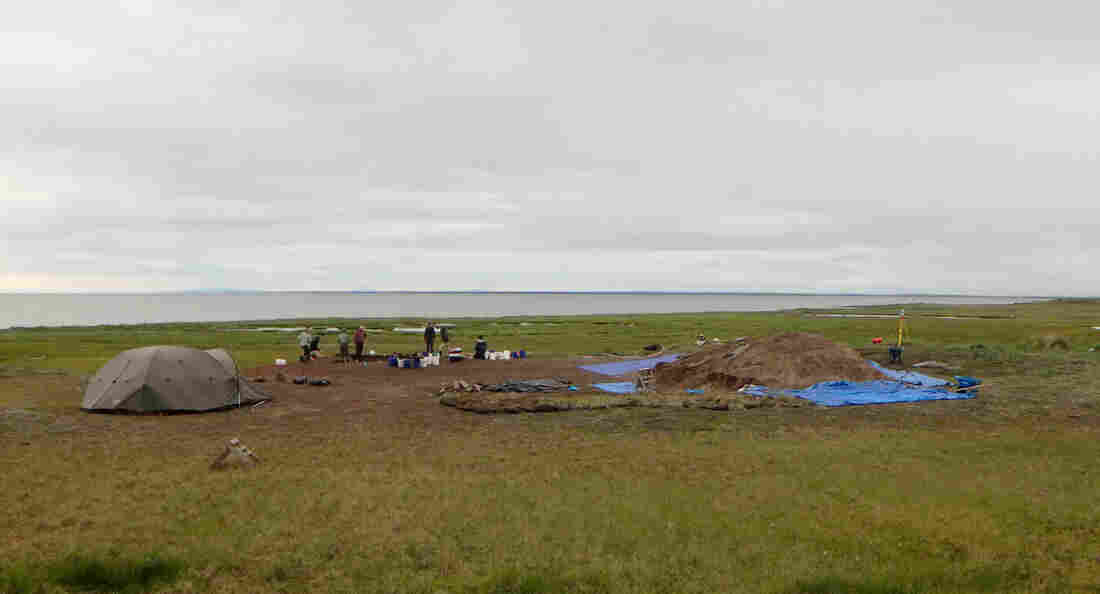 Beneath the green grass of the Rising Whale Site lie the remnants of an ancient seaside village. Cape Espenberg Birnirk Project hide caption

Beneath the grass, says Mason, "there are at least 50 or 60 houses, maybe even 70. But that's just on this ridge alone."

Inside those homes, he says, are clues about how ancient people survived climate change.

"Do you want to see one of the homes?" asks Mason, who is on the faculty of the University of Colorado, Boulder.

He takes me over to a giant hole in the ground, where scientists are on their knees excavating a 1,000-year-old log cabin.

"The level of work that went into making that house — it's just amazing," says Claire Alix, an archaeologist from the University of Pantheon-Sorbonne and the University of Alaska Fairbanks who's leading the excavation.

And it's true, this house is an impressive seaside cottage. It has at least three rooms, including a kitchen, on multiple levels, likely designed to trap cold and keep the house warm during the winter. The floors and walls are made from beautiful tree trunks. 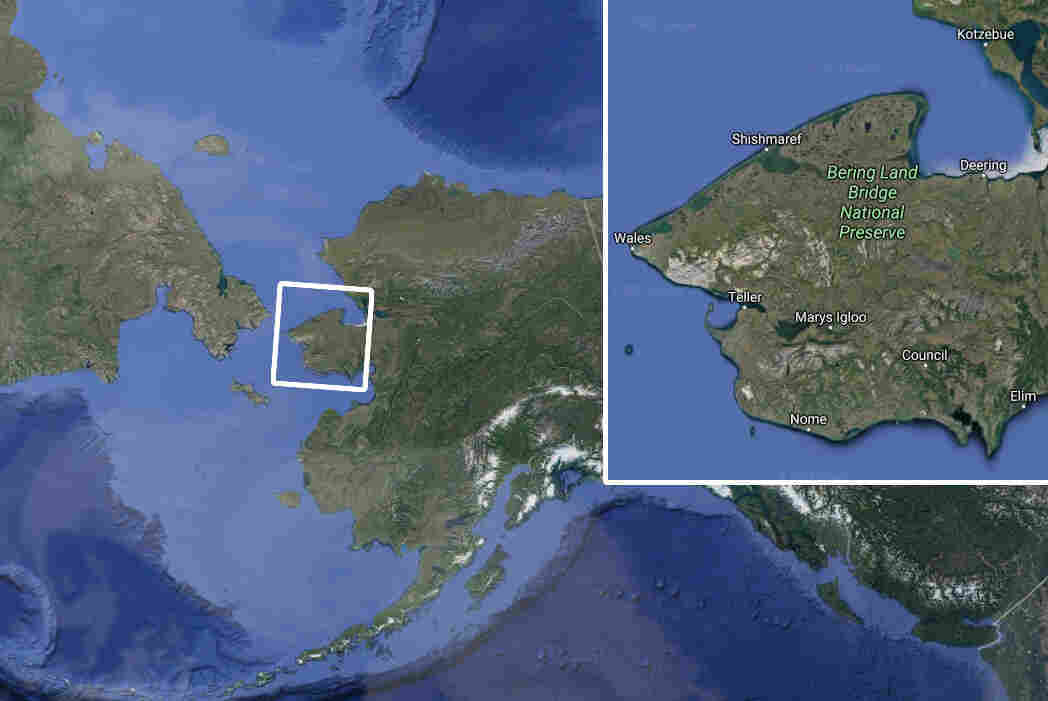 "Look at the size of those logs," Alix exclaims. "They are huge."

Over the next few weeks, the team expects to recover more than a 1,000 artifacts from the home — pottery, arrowheads, fur, bones and even clothes — 1000-year-old clothes.

As the artifacts come out, one by one, I quickly realize: These ancient Arctic people are a lot like us today.

They wore leather clothes. They probably had dogs. "Large dogs, yeah," Norman says. They had tattoos and followed a strict gluten-free diet — of seal, caribou, fish and birds. They liked to make bone broth.

"People during this time boiled bones to get grease out of them," Norman says, "which they ate or put into soups."

These people had something else in common with us today, Owen Mason says: They were facing big changes in their climate..

"It was called the Medieval Climate Anomaly," he says. "And that seems to be a unique time in climate history.

Scientists aren't exactly sure why — maybe shifts in energy output from the sun; maybe volcanoes were involved — but for some reason, the world's climate temporarily went haywire 1,000 years ago. Some parts of the world got warmer, like Europe.

"The vineyards spread all the way up into Britain," Mason says.

But other parts, such as the Middle East and the Arctic, grew colder.

"There was the expansion of glaciers, and there were really massive storms around this time," Mason says.

The world was changing quickly. "I like to think of it as climate chaos," he says. And the family living in this home had to figure out a way to adapt.

"One of these things just cropped up today," Mason says. "This bola."

It's basically heavy weights tied on the end of a string, Mason says. And it's a potent weapon for hunting birds. Swing the weights in a circle, then toss them into the air and you can kill birds in mid-flight.

It sounds simple. But Mason thinks it could have been key to survival.

"Trapping the birds as they fly seems like a very efficient means of hunting," he says. So with the bola, the family could supplement their diet with more birds when other food sources disappeared because of climate change.

"This device just seems to appear right around this time of climate change," Mason says.

Another innovation appears around this time, too: "Wound pins," Mason says.

This device is crazy. It's basically a little nail made specifically for plugging up the wounds on a killed animal. Why?

"You're sealing the wounded seal so that the blood is retained rather than lost as the animal is carried back to camp," Mason says. "That gives you something valuable in terms of nutrients."

To live up here in the Arctic, people needed to be technologists. They had a gadget for everything. Seriously, they would put Silicon Valley geeks to shame with their innovations.

So when climate change threatened their food supply, they innovated their way out of the problem.

"Technology and innovation follow climate challenges and the requirements of the animals," Mason says. "That's an idea Arctic archaeologists have been looking at, either directly or indirectly."

This trend crops up several times in human history. People's ability to create new tools helps them survive when their environment changes quickly.

For us, right now, this idea is a bit paradoxical. If you think about it, technology is what got us into this current climate mess in the first place.

Could it also be the key to getting us out of it?

Bill Gates thinks so. "We need to adapt to the climate change that is already affecting the planet, and develop new tools that will keep the problem from getting worse," he wrote Tuesday on his blog. "Innovation is key to doing both." (As our readers may know, the Gates Foundation is a funder of NPR and this blog.)

But there is another survival strategy we can learn from the ancient people in the Arctic, says Dennis O'Rourke, an anthropologist at the University of Kansas who is helping with the excavation.

He takes me over to the beach to show me the evidence.

"If we go just immediately west from here, within 200 to 250 miles, you're close to Bering Strait and Russia," O'Rourke says as he points across the sea.

Right now there's water separating us and Russia. But 20,000 years ago, there was something else keeping people out of North America: glaciers.

"The glaciers prevented people from moving east or south into the continent," O'Rourke says.

But then another climate change began. The Earth started warming up. Glaciers began to melt and expose land.

"People then had the opportunity to move into new areas," he says. "They could go down the coastlines, down through the interior and eventually disperse through the whole continent.

So, in a way, climate change was what allowed people to migrate into North America?

"Yes, in a way," O'Rourke says. "Climate change can be a constraint on what people do. It can also provide an opportunity — an opportunity to enter new areas."

Then you start to wonder: What are we going to discover during this climate change. Where is there left to go? Maybe we'll have to say goodbye to Earth.