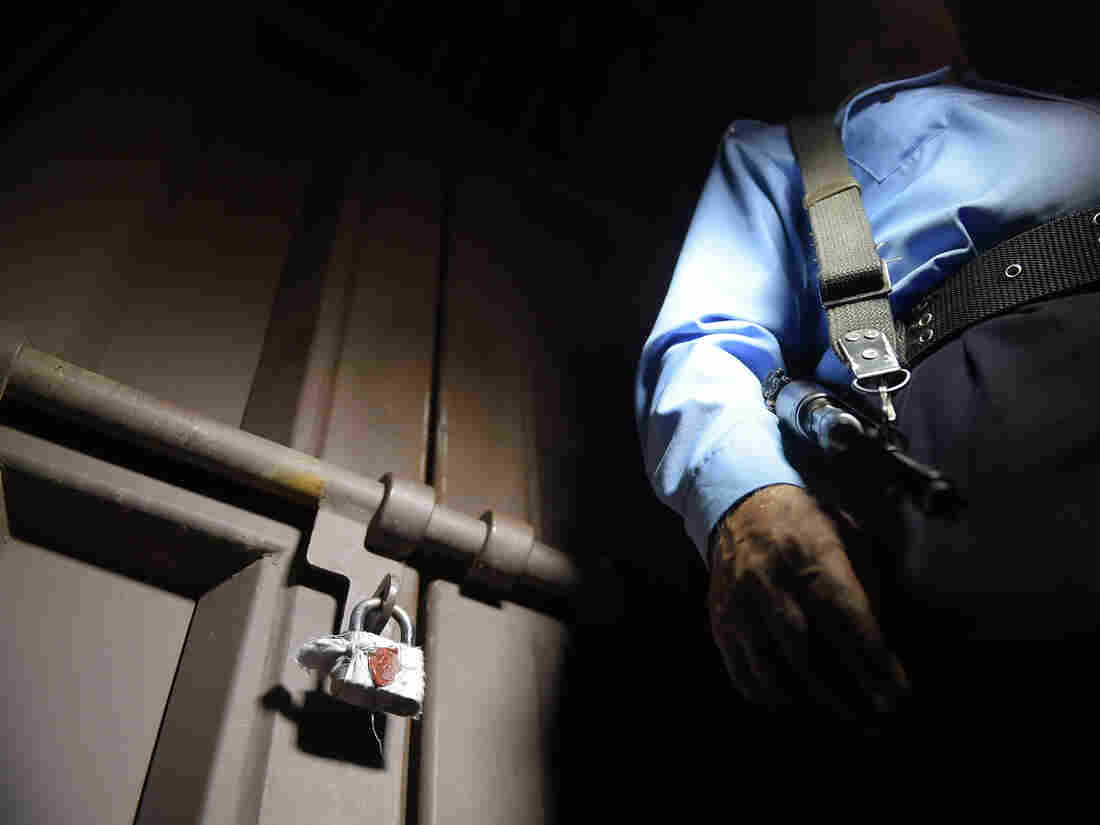 The latest Pakistani crackdown on aid groups isn't the first. Above: A policeman stands guard outside the office of Save the Children in Islamabad, which was shuttered by Pakistani authorities in June 2015 under suspicion of "working against the country," according to government officials. Aamir Qureshi /AFP/Getty Images hide caption 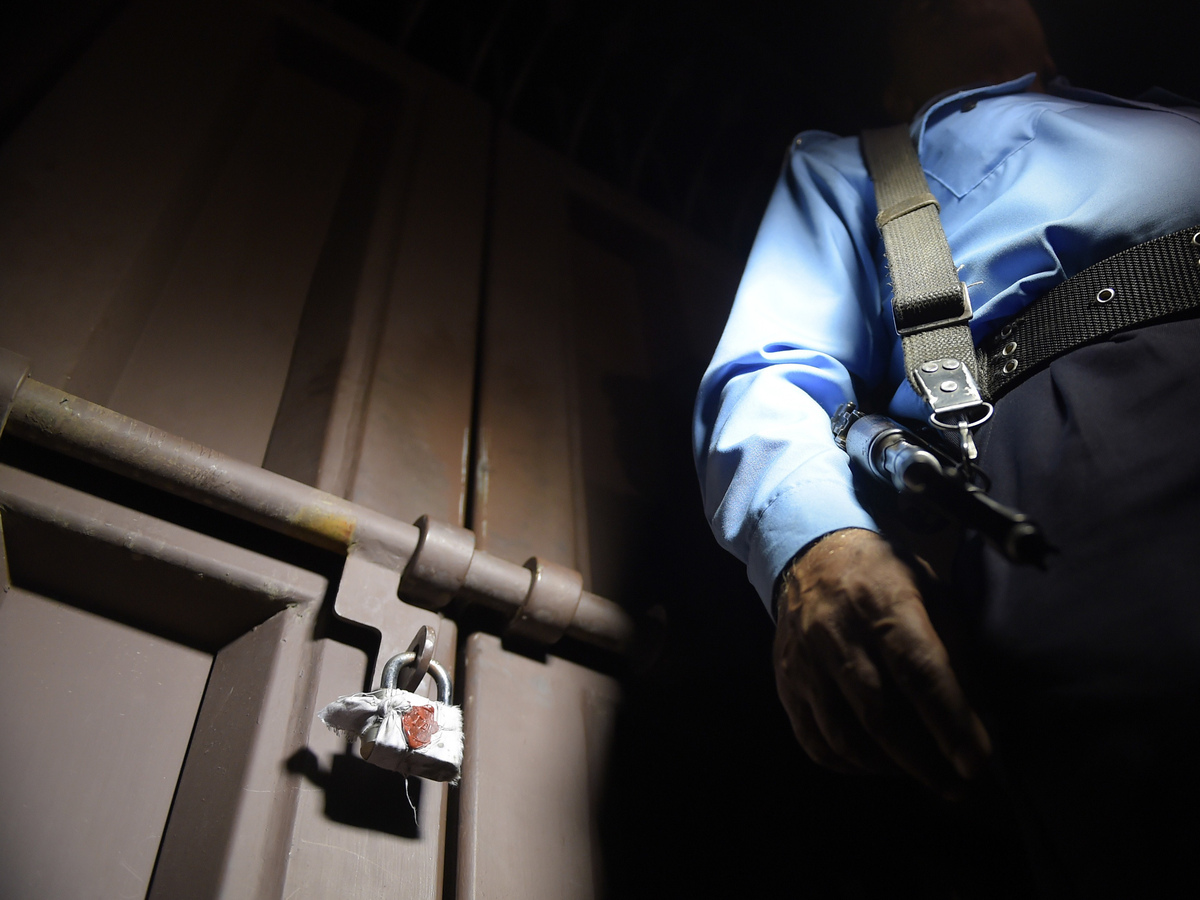 The latest Pakistani crackdown on aid groups isn't the first. Above: A policeman stands guard outside the office of Save the Children in Islamabad, which was shuttered by Pakistani authorities in June 2015 under suspicion of "working against the country," according to government officials.

Aid workers said the move could upend services to the country's neediest people. The groups on the list do everything from providing contraception to women to helping farmers purchase drought-resistant seeds. In addition, the aid workers say, hundreds of local jobs could be threatened.

The notice came in early December. Since then, "there's a sense of panic and confusion" in the nonprofit community, says Mohammed Qazilbash, country director of Oxfam Pakistan.

Pakistan has long viewed foreign aid groups with suspicion, particularly since the CIA recruited a doctor in a vaccination program to help confirm that they'd located Osama Bin Laden, ahead of the commando raid that killed him in 2011. Pakistan linked the doctor to Save the Children and expelled its foreign staff. The charity denied any links to the CIA and the doctor.

The decision showed "disturbing disregard for the well-being of ordinary Pakistanis," says Brad Adams, Asia director at Human Rights Watch, in a statement sent to media on Friday. "The government should be facilitating the vital work of independent groups, not obstructing it with intimidation tactics."

In Pakistan, Growing Concern Over Tensions Between Military And Civilian Leaders

In October 2015, the government began a new registration process for aid groups. An interior ministry official, speaking on condition of anonymity in line with ministry policy, says they gave notice to 27 aid groups that the government had rejected their registration applications. Pakistani intelligence agents, which must review each organization, did not clear them, "so we had to reject their applications," he says. He did not say what specific concerns triggered the move.

The interior ministry official said his offices gave the groups 60 days to shut down operations — and 90 days to appeal the decision.

In a statement, the interior ministry said the organizations "have not been approved for registration on account of non-responsiveness, non-substantive projects and security reasons." The statement also said that Ahsan Iqbal, the minister of the interior, "directed that there should not be any hurdles for authentic INGOs [international non-governmental organizations] who are playing [an] important role in {the] development sector."

The statement did not provide further details. Officials would not comment further.

There was some discrepancy in the numbers of organizations ordered to shutter. The Associated Press said 21 organizations were affected, citing an official who also spoke on condition of anonymity.

Most affected groups declined to be identified. They include some of the world's most prominent aid organizations. An official from one of those organizations said she feared that identifying her group would jeopardize the appeals process.

Meet The Most Influential Poverty Fighter You've Never Heard Of

Some groups did confirm that they were ordered to shut down. They ranged from an organization called BRAC, which runs hundreds of schools in impoverished areas, to Action Aid, which helps farmers mobilize to get better services. Another group on the list is the Open Society Foundation in Pakistan, which offers millions of dollars in grants to local charities. [Ed note: The Open Society Foundation has been a financial supporter of NPR.]

This isn't first time aid groups in Pakistan have been uncertain about their fate, says Qazilbash of Oxfam.

Still, for those affected in this latest crackdown, there was a sense of surprise. "It was a big shock for the staff," said Iftikhar Nizami, country director of Action Aid. One of his colleagues was building a house and was in debt. "He came to me and he was crying," Nizami said. "People are in a lot of trouble."

It was not clear if there was a specific trigger that prompted intelligence officials to order the shutdown of so many groups, which collectively, pour millions of dollars into the country.

It may reflect what analysts say is growing paranoia among security officials toward activists, journalists and those critical of the military.

"The recent action against nongovernmental organizations comes amidst a shrinking space for free expression and dissenting voices," said Adams of Human Rights Watch in a statement. "Placing arbitrary restrictions on international groups is likely to increase the climate of fear for domestic organizations."

Retired Brig. Haris Nawaz, a military analyst in Pakistan, says intelligence officials believed some international aid groups were spreading "negative propaganda" against Pakistan regarding Balochistan, a province where the army and separatists are engaged in conflict.

Nizami of Action Aid tried to calculate the impact of his organization shutting down: The group sponsors between 9,000 to 10,000 children. They work with 20 local groups to implement projects and have over 50 employees. If their appeal is rejected, they would have to sever ties with communities where they had worked for over 15 years, he says.

Nargis Khan is the policy and communications adviser for the Pakistan Humanitarian Forum, which represents 63 foreign aid groups, including 10 that were ordered to shut down.

"It has a big impact in local communities," she says, on "local people and their jobs. She ticked off sectors that would be hurt: "health, education, livelihood, food, security, water, these operations: there's no kind of handover."

Qazilbash of Oxfam Pakistan said a middle ground could be found. Most groups would appeal the rejection. Existing projects could be handed over to local groups or to the government.

He says the true impact could only be known if the government rejected the groups' appeals to stay in Pakistan.

Only then, he says, "we can start talking about the potential repercussions of them withdrawing from the country."