Accessibility links
Off-Broadway Play 'African Mean Girls' Earns Raves For Its Twist On A Classic Tale : Goats and Soda Playwright Jocelyn Bioh is using a familiar premise to show us a different side of Africa. 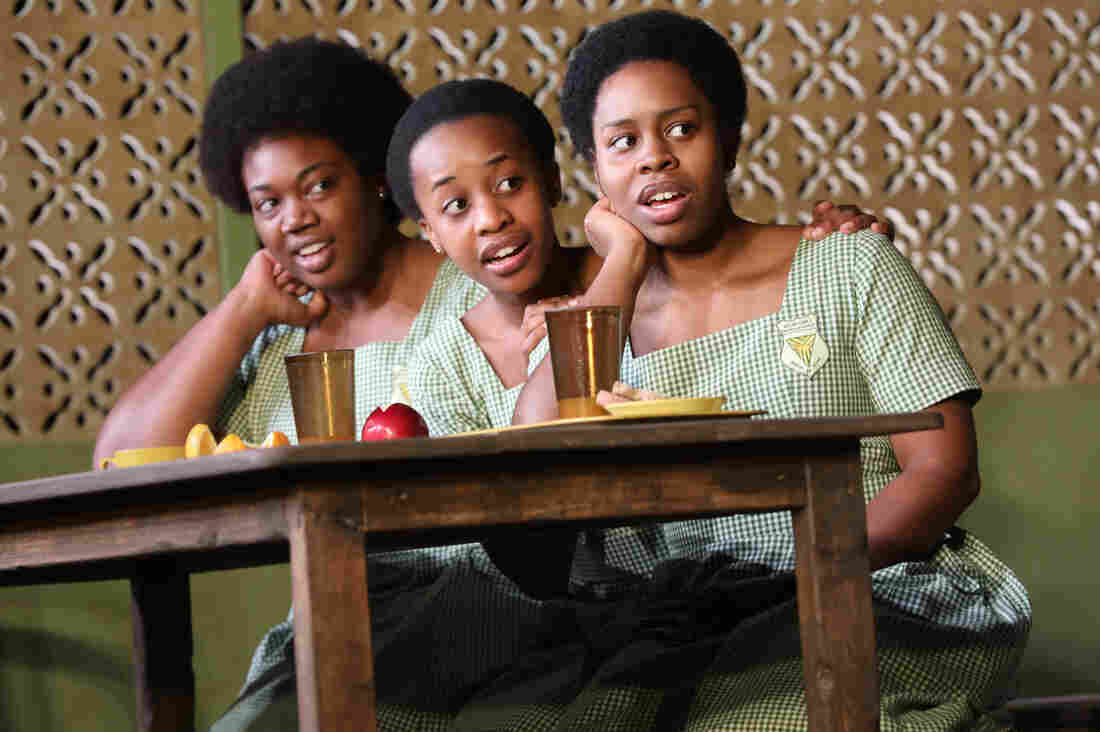 Nana, portrayed by Abena Mensah-Bonsu (left), is frequently picked on by the girls at her boarding school in Ghana, who harp on her weight. Joan Marcus hide caption

Critics are heaping praise on a new off-Broadway play about life in modern Africa. But if you're assuming the topic must be war or disease or famine, you're in for surprise.

This play is about ... mean girls.

School Girls; or, The African Mean Girls Play — running at New York City's MCC Theater through December 31 — is set in at a boarding school in Ghana in the 1980s, where the ruthless queen bee seems unstoppable until an exotic new girl arrives from Ohio.

The familiar premise is something of a "marketing ploy," confesses playwright Jocelyn Bioh. "We've been able to use it to get people invested in the story in a way that they know will have lightness and levity." Then, she adds, with a rueful laugh, "I switch things on them."

To understand how and why Bioh does that, it helps to know the origins of her work. She decided to become a playwright when, as an acting major at Ohio State University in the early 2000s, she was having a hard time landing roles. She's dark skinned — the U.S.-born daughter of immigrants from Ghana. And she says it seemed as if all of the roles were being, as she puts it, "cast to type" — meaning there was an assumption that if a character was originally written as a white person only a white person should portray her. 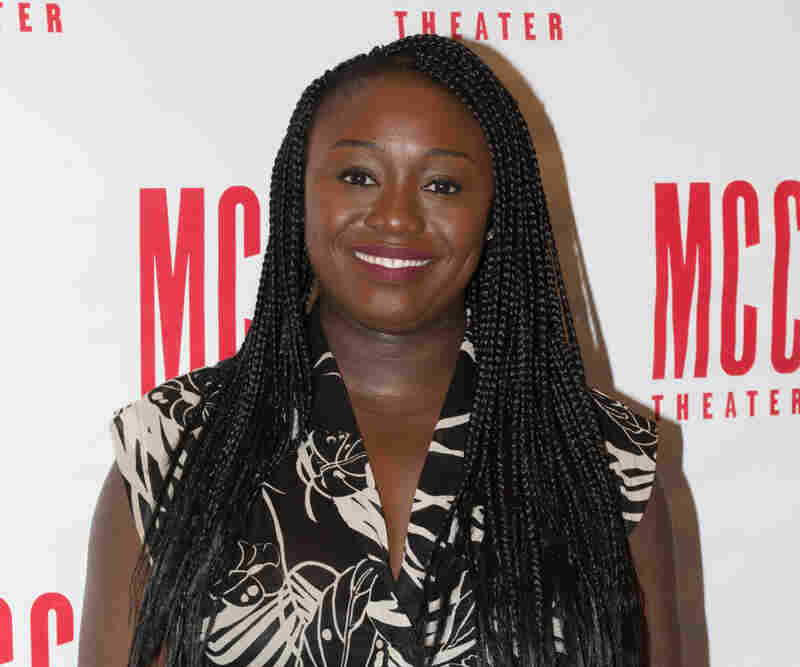 Finally, Bioh was offered a part. As a cockroach. It wasn't even a solo role. This was going to be a chorus.

"Yeah, I wasn't the lead cockroach!" she says. "I'm like, how are you going to be part of the chorale of roaches! Even my 19-year old self understood how insulting that was."

So she set out to write her own material — nuanced, lead roles for black women. And from the start she was drawn to stories about life in contemporary Africa — the life she'd come to know through her parents and through visits to Ghana growing up.

At first it wasn't easy getting her plays produced. On one of her early works, about a young ingenue trying to break into Nigeria's "Nollywood" film industry, she says, "I got a lot of notes and questions." How, she was asked, can you write about Africa and not mention government corruption or civil conflict?

"You could just see that it was so difficult for people to break the relationship that they had with Arica and strife, Africa and war."

"Not that those stories are not true or accurate and should not be told," adds Bioh. But she says for so many Africans that's simply not the day-to-day reality. And it's that other side of the African experience that she wants to bring to American theater.

Hence Bioh's decision to write School Girls, focused around a character she figured would have irresistible appeal: the mean girl. 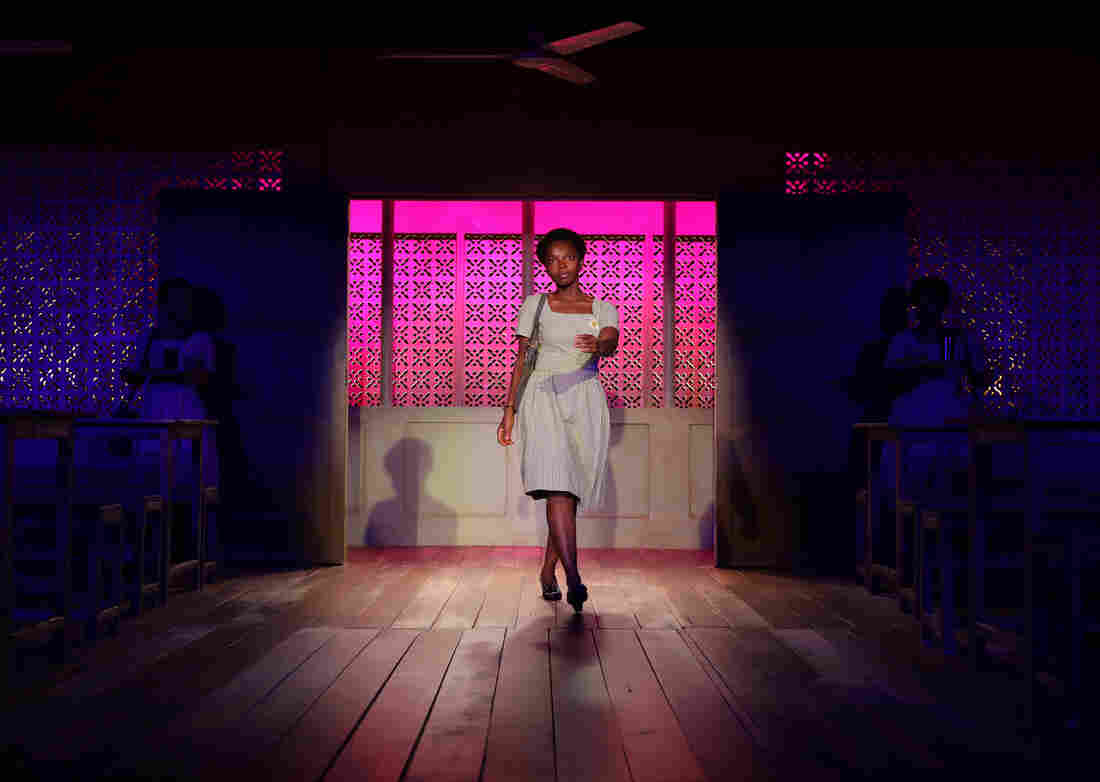 The queen of the mean girls is Paulina, played by MaameYaa Boafo. Joan Marcus hide caption

The queen bee — infused with a brilliant mix of ruthlessness and charm by actress MaameYaa Boafo — does not disapoint. We first meet her — where else! — in the cafeteria, as she's ripping into one of the girls in her crew for eating too much porridge.

"Are you determined to look like a cow?" sneers the queen, to giggles from the other girls. Yeah, they join in, snapping their fingers for emphasis: "We have a reputation to maintain!" "To stay fit-fit!" "Looking fine-fine!" "All of the time!"

But just as we've got the queen bee pegged as the sort of villain we love to hate, Bioh goes deeper.

She wants to explore the insecurity that's at the heart of girls' cruelty to each other. And for these girls that insecurity has its roots in the corrosive legacy of colonialism. That's because they are competing to meet an ideal of beauty and worth that's imported from the West — which means, by definition, that they'll never measure up. 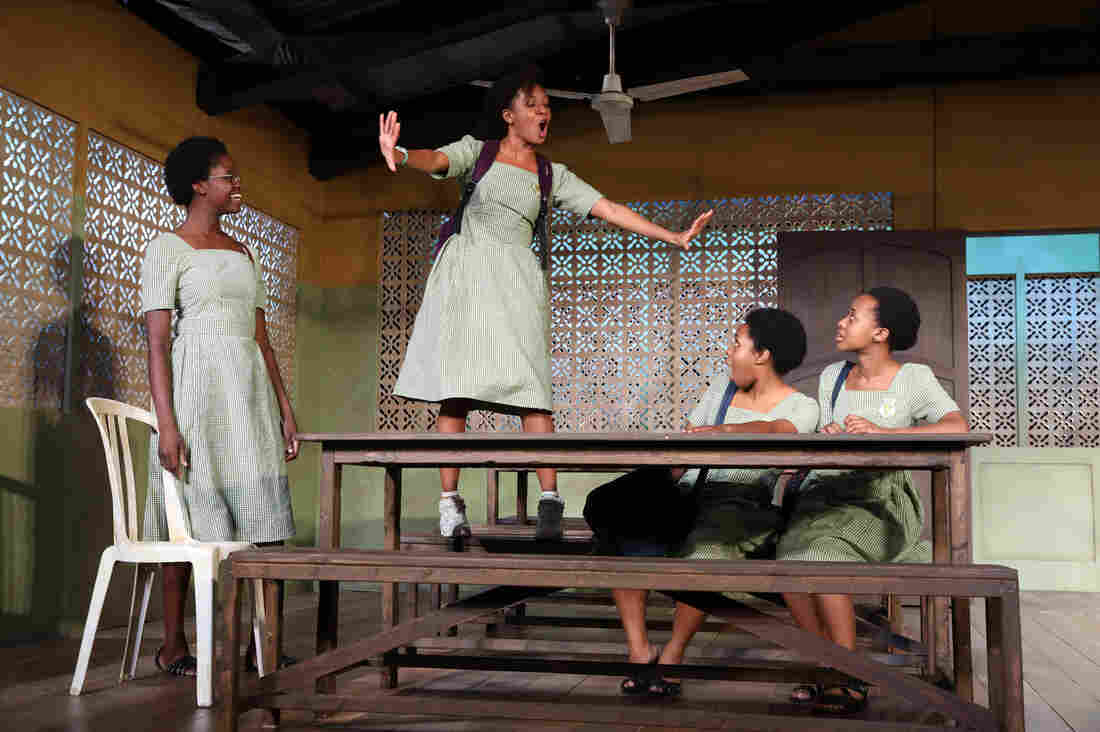 Standing on the bench, new girl Ericka is portrayed by Nabiyah Be. Ericka is from Ohio and she's biracial. Her lighter skin puts her in the lead when a recruiter for the Miss Ghana pageant comes calling. Joan Marcus hide caption 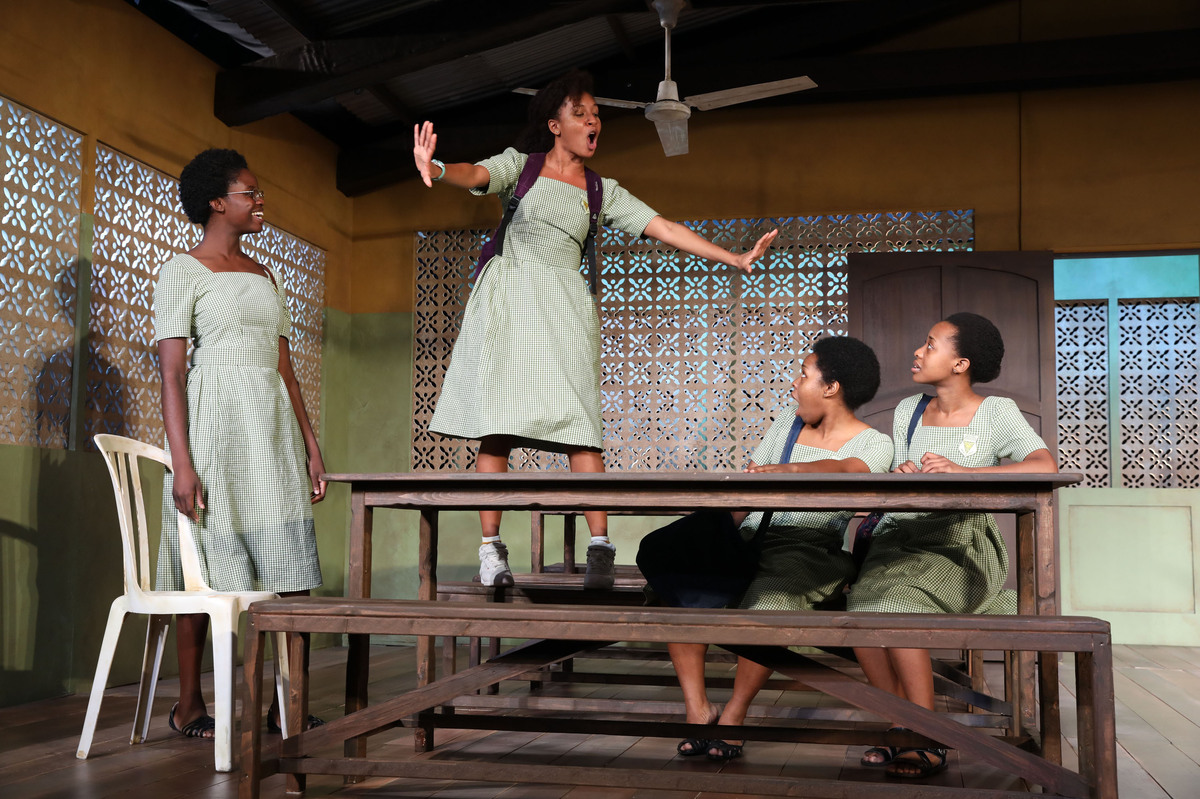 Standing on the bench, new girl Ericka is portrayed by Nabiyah Be. Ericka is from Ohio and she's biracial. Her lighter skin puts her in the lead when a recruiter for the Miss Ghana pageant comes calling.

It all comes to a head when the new girl shows up. The queen bee has met her match. And not just because the new girl is American-born, just in from Ohio, and can wow the other girls with her music and posters from the U.S. The new girl is also half-white. This puts her in the lead when a recruiter for the Miss Ghana pageant comes looking for a girl with, as she puts it a "more commercial look."

The school's headmistress, pushes back. "So you are saying what, exactly?"

The recruiter gives a breezy wave of her hand. "That we are just looking for girls that fall on ... the other end of the African skin spectrum."

Bioh says this twist was inspired by the real-life controversy that erupted back in 2011 when a very light-skinned Minnesota-born woman was chosen as Miss Ghana.

"Ghanian bloggers and entertainment news [sites] that covered the story felt it was very clear that the pageant officials thought they would have a more competitive candidate [for the Miss Universe pageant] in a girl who was fair-skinned," says Bioh.

"And that was very fascinating to me. You know, that this standard that we uphold in Western culture has somehow infiltrated into African culture."

In desperation, the queen bee resorts to a dangerous measure: skin-bleaching cream. Bioh says she was drawing from personal experience on this one.

"A lot of women in our family — and at one point even myself — we all had some sort of experience with skin bleaching. It's a huge, what I would call, epidemic in many African countries."

Indeed the harsh chemicals in many bleaching creams can cause such devastating skin damage that last year Ghana became the first country to outlaw the products.

The queen bee's unraveling offers some of the play's most memorable — and wrenching — moments. Boafo, who is herself Ghanian, says portraying such a layered character was "a treat." Too often the roles that she has been offered in the United States are "the helpless little African." "It's such a blessing to have [Bioh] write such three dimensional characters who happen to be African."

Yet just as important as this theme is another: the challenge faced by the new girl in a culture that — for all its admiration of her lighter skin — ultimately considers her an outsider.

The actress who portays her, Nabiyah Be, says her character's pain carried special resonance. She too is biracial — and yet until now she's only ever gotten to play black women or latinas.

"As a biracial person you often feel like you're trying to figure out where you stand between two cultures. And this is the first time I've played someone so close to me."

The Next 'Game of Thrones' Could Be Set In Post-Apocalyptic Africa July 23, 2017

How can African women ever surmount the poisonous messages swirling around them? There's the hint of an answer when the girls gather to perform a hilariously off-key rendition of Whitney Houston's "Greatest Love of All" for the pageant recruiter. As they belt out the lyrics — "Learning to love yourself; it is the greatest love of all" — it's clear that the girls aren't there yet. But their gleeful singing shows they're definitely trying.