Accessibility links
See Dioramas Of Refugee Homes, Each Re-created In An Old-Fashioned Suitcase : Goats and Soda The miniatures, each displayed in a piece of luggage, capture telling details — a blooming plant in a flowerpot, a kid's tricycle covered in dust, holes punched by bombs.

Artist Creates Tiny Houses From The Memories Of Refugees

Artist Creates Tiny Houses From The Memories Of Refugees 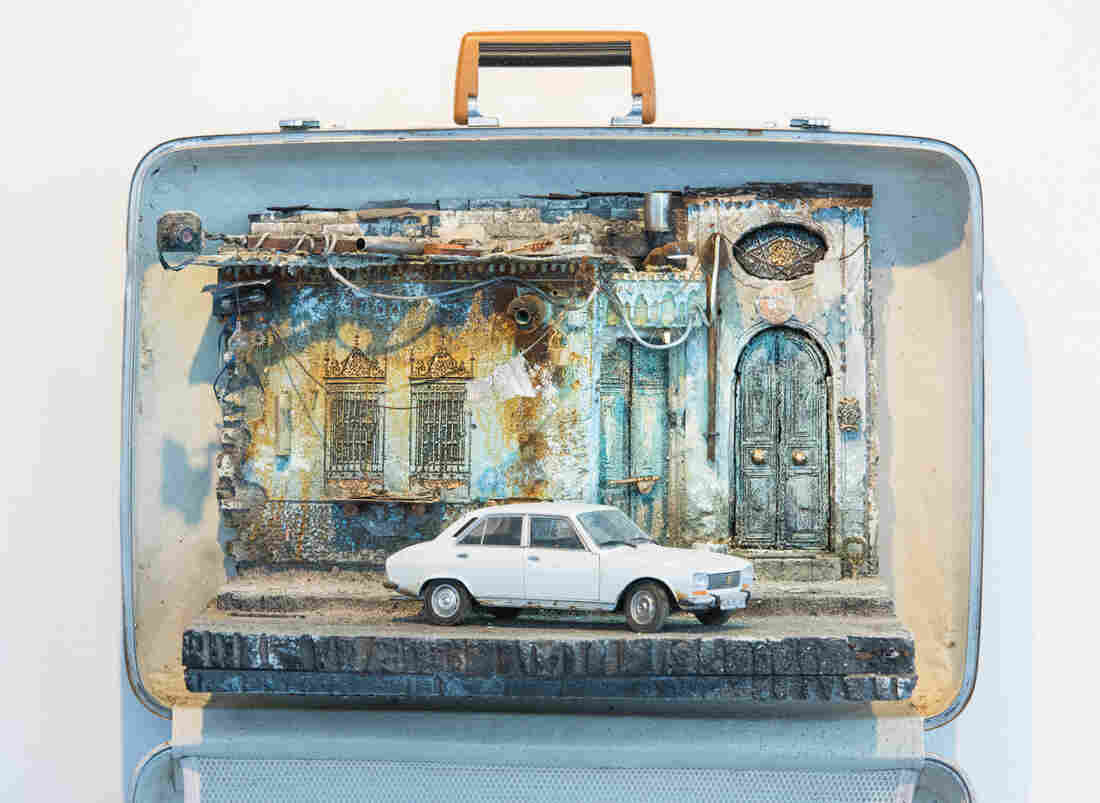 The white Peugeot 405, the vehicle of choice for the Syrian secret police, is parked outside a home in Damascus. In the diorama's upper left corner hangs a camera, suggesting surveillance. Rodney Nelson hide caption 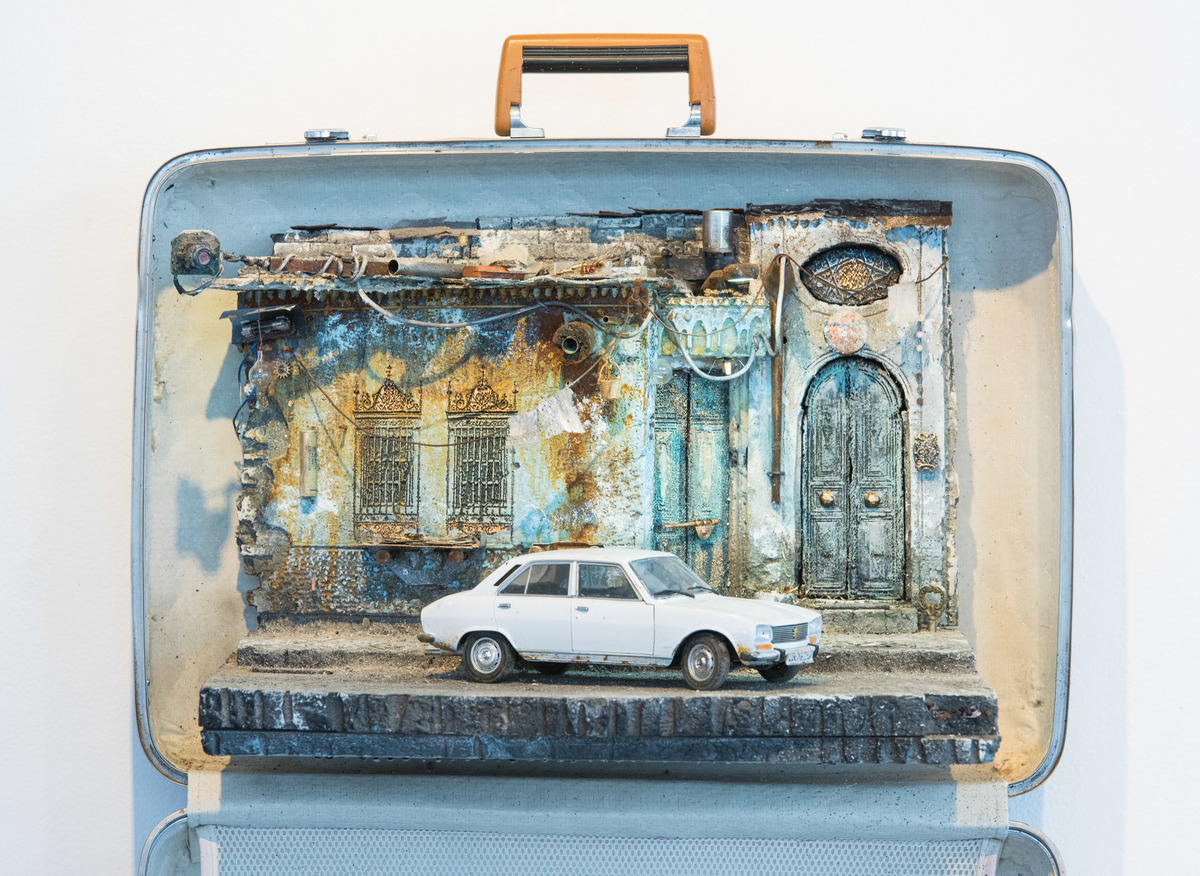 The white Peugeot 405, the vehicle of choice for the Syrian secret police, is parked outside a home in Damascus. In the diorama's upper left corner hangs a camera, suggesting surveillance.

Editor's Note: This story was updated on Dec. 29 to reflect the new closing date for the exhibition.

At first glance, it seems like a charming exhibition: Ten old-fashioned suitcases, with a miniature diorama in each. The models, with their meticulously detailed furnishings, remind you of dollhouses.

Then you spot snaking tangles of exposed wires, rubble-strewn streets and blasted chandeliers. A child's tricycle is gritty, covered in dust.

It's only after you read the wall texts and listen to the accompanying audio that you realize what's going on. These small sculpted dioramas represent the homes left behind, often in a state of destruction and disarray, by refugees and immigrants who fled their native countries.

Iraqi Refugee Empowers Youth To Share Their Stories With 'Narratio'

Iraqi Refugee Empowers Youth To Share Their Stories With 'Narratio'

Artist and architect Mohamad Hafez and writer, speaker and student Ahmed Badr created the project to humanize the lives and stories of refugees, they say. The stories and homes could belong to "your neighbors, friends, kids your kids go to school with," says Badr, 19, a sophomore at Wesleyan University, who is from Iraq and is himself a refugee. The suitcases further stand for "the memories and the emotional baggage that we all have and carry with us," says Hafez, who was born in Damascus and originally came to the U.S. to study at Iowa State University.

The art installation, "Unpacked: Refugee Baggage," is on display at the UNICEF Center in New York through January 19. Its creators are trying to arrange future venues for their exhibit.

Badr and Hafez began working together on the project in the summer of 2017, each bringing a different skill set to the mix. Badr is responsible for "the story part and the audio," which includes interviews with the refugees and additional commentary from Badr. Hafez provides the visual aspects. Together they interviewed ten families that had resettled in New Haven, where Hafez now lives. Hafez created the dioramas based on those stories. Because there were no photographs, only memories, he asked interviewees to "describe the furniture, what did the room look like, tell me about your favorite room, what is your favorite object in the house, what did you take with you when you left." And then Hafez went back to his studio and started modeling.

Here is a mini-guided tour of a few of the dioramas: 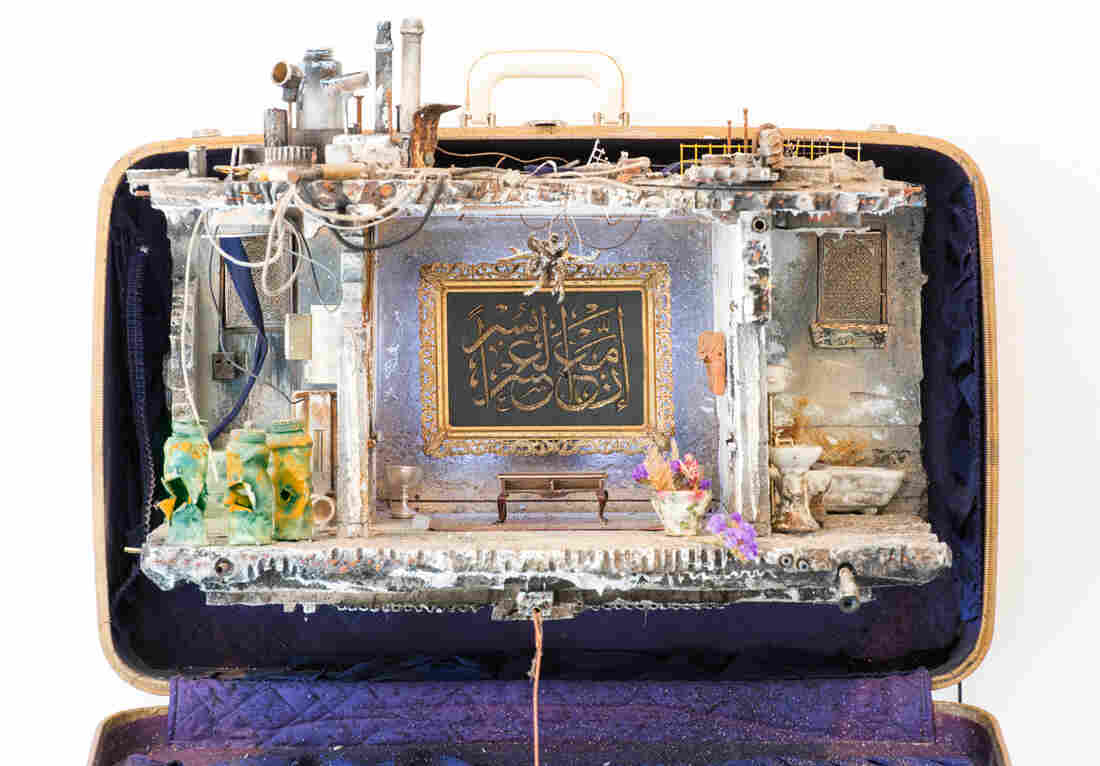 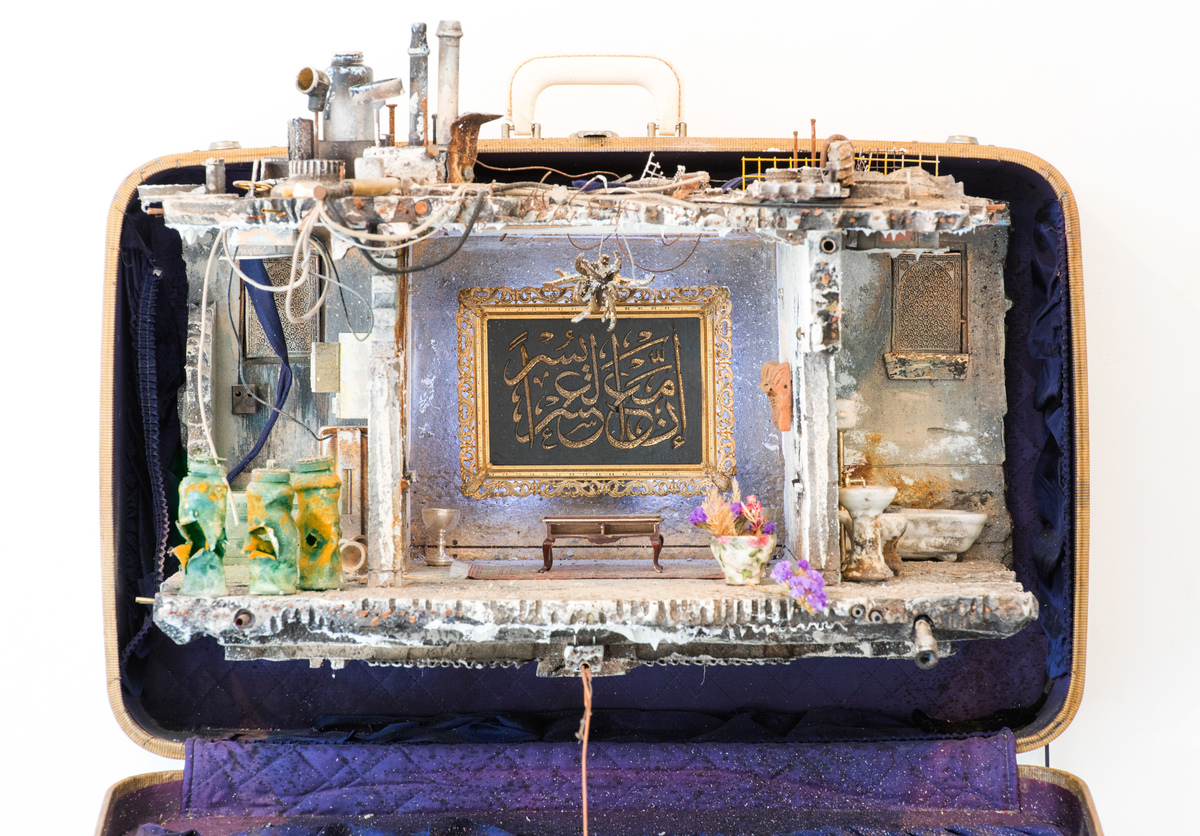 A missile struck the Badr family home in Iraq in 2006.

The diorama displays three rooms. From the massive holes in each wall, says Badr, you can see the trajectory of the missile that on July 25, 2006 flew through the Baghdad house in which Badr and his family lived. The bomb entered via the bathroom wall, passed through the living room and into the kitchen. There it also punched holes in three metal canisters, which the family had just a few days before emptied of the natural gas they contained. That was fortunate; had the canisters been full, the whole neighborhood might have gone up in flames. The bathroom and kitchen are covered with dirt and dust; an array of metallic debris looms overhead. Yet the living room is mostly intact, a verse from the Koran in elaborate calligraphy seemingly untouched in a golden frame, and a pot of brightly-colored flowers blooming in the foreground — suggestions, perhaps, of hope. Within a week of the bombing, the family left for Syria, then made their way to the United States. When Badr first saw the diorama, he says, "I felt as if I entered my house for the first time in 11 years. I never thought I would see it again." 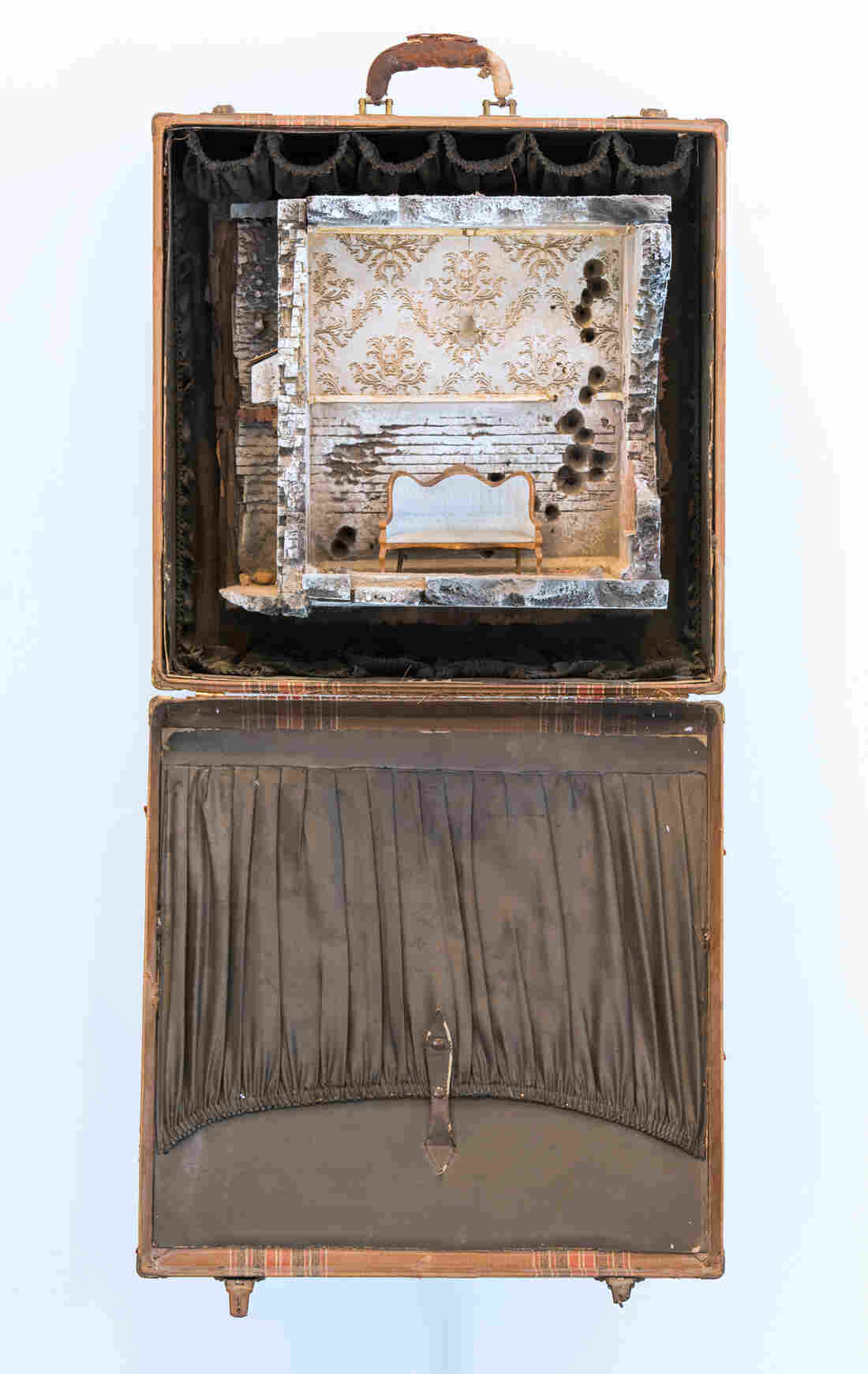 The home in Damascus that Mohamad Hafez's mother had to abandon. Rodney Nelson hide caption

Mohamad and Mom: Elegance In Damascus

"I grew up in a house [in Damascus] where guests and family members were always present," says Hafez. The formal living room was the central meeting place. The tasteful Baroque sofa that comprises the only furniture in the diorama reflects "the elegance and mood of the home that my mom built," says Hafez. His parents and other members of his family now live in other countries. That disruption is symbolized by the series of bullet holes punched through a backdrop made up of bleached and broken bricks and an elegant golden French wall hanging. "As an artist and an architect, I am very interested in the way that architecture tells the story of people's lives," he says. In fact, no human figures appear in any of the dioramas; the rooms themselves tell the tales. 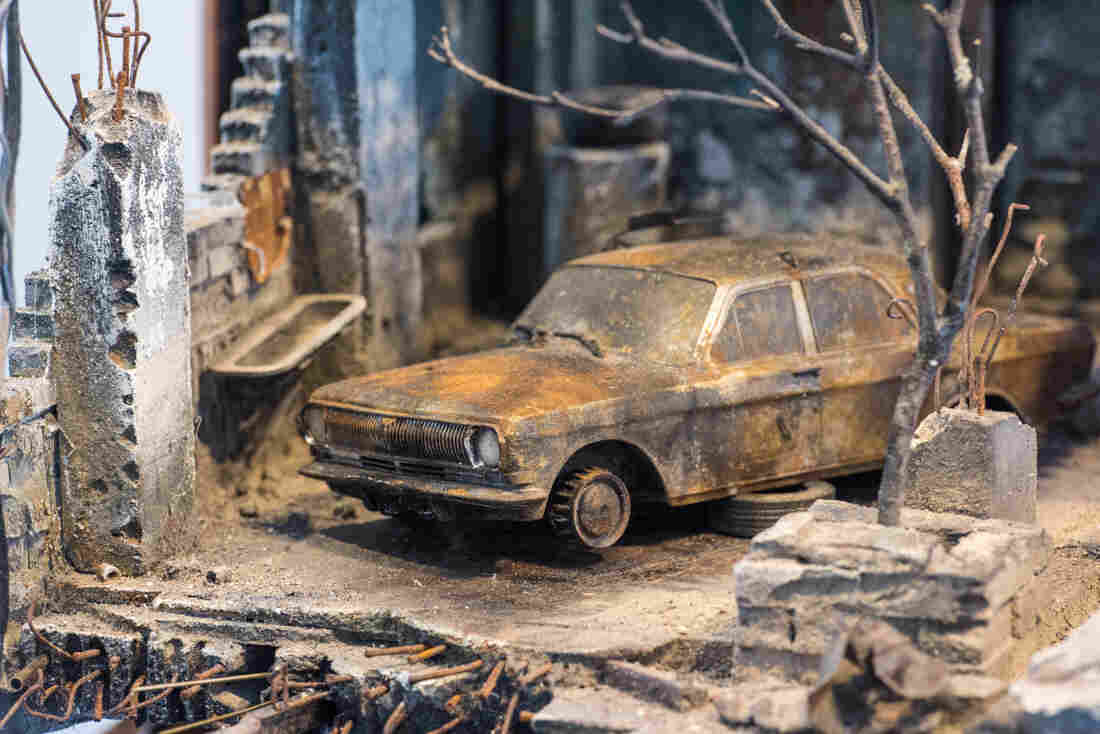 The car belonging to the Shaham family was damaged in a 2003 fire at their home in Mosul. Rodney Nelson hide caption

A singed car sits at the center of a desolate scene of stray tires, a barren tree, and scattered debris. The diorama depicts the aftermath of a 2003 fire that engulfed the home of Um Shaham and her family. The ground beneath their car is covered with sand, which neighbors threw on the car to quench the fire — but is tinged with red to reflect the burns she and her son suffered. The scene speaks of a "demolished life," says Hafez. "You can't make sense of everything she went through," and it's "intentional that you can't figure out and make sense of every single object there." You can nonetheless see in the background an arched doorway reflective of traditional Iraqi architecture. Shaham's husbad was subsequently killed by a stray bullet while driving his taxi. She and her children went to Turkey, and from there to the United States. 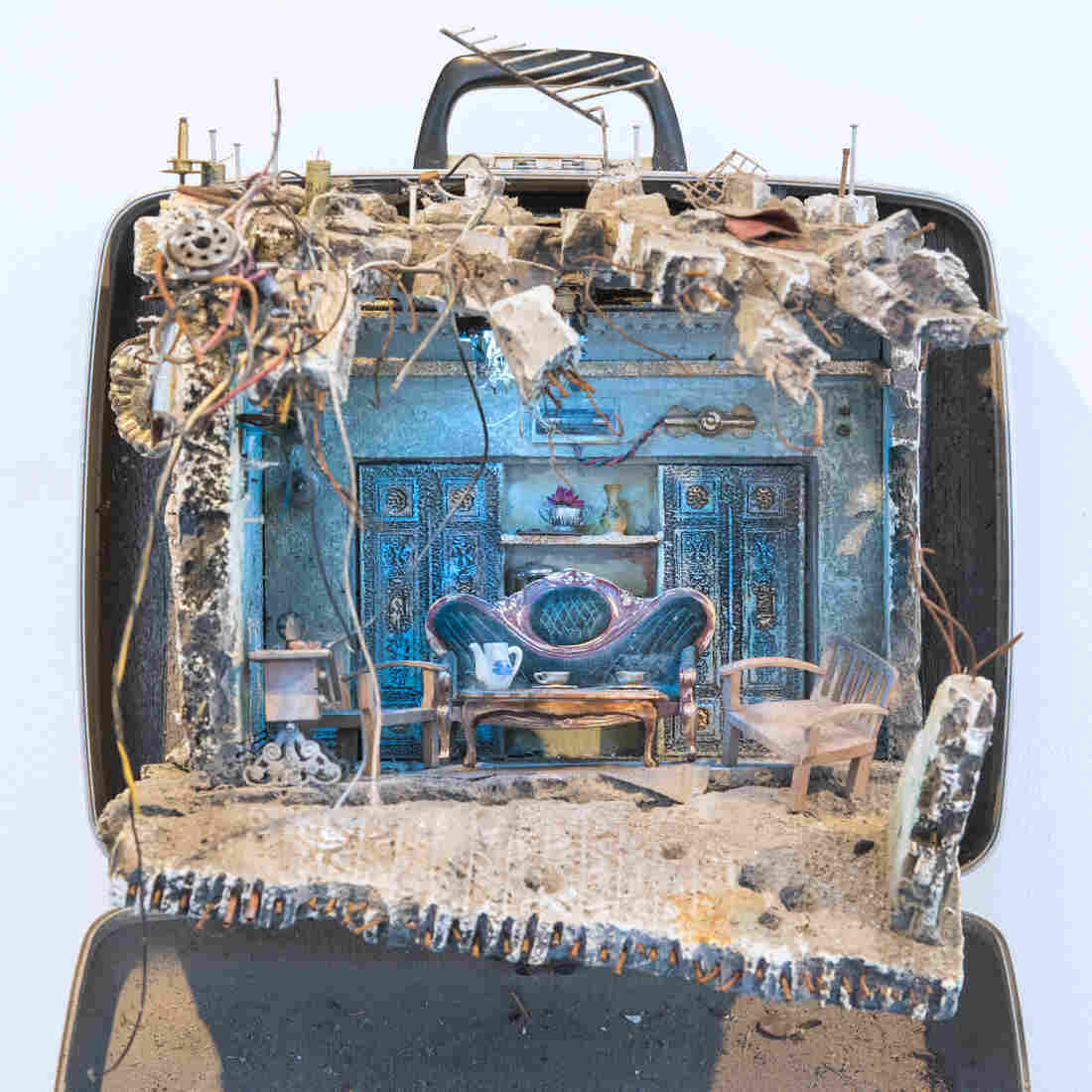 Aymen and Ghena evacuated their home in Homs, Syria, when the civil war hit their neighborhood. Rodney Nelson hide caption

"When the army is marching through your village, you have to run," says Hafez. "Everybody is at risk, and people do not get a chance to pick up their belongings." Teenage siblings Ayman and Ghena learned that lesson when, in 2011, the civil war arrived in their neighborhood in Homs, Syria, forcing them to evacuate immediately. Left sitting on their living room table were the coffee cups and coffee pot depicted in this diorama. The wavy art-deco style aquamarine sofa is empty, the sewing machine in the corner is still, the doors of the elaborately decorated cabinets closed shut. But gushing out from the fractured ceiling overhead are large, weird-shaped chunks of rubble, peculiar metallic objects that could be damaged pipes or dented nails, and haphazardly hanging collections of snarled wires. "It's the guts of the building hanging out — but it's also the life that was inside the building gutted out of it," says Hafez. 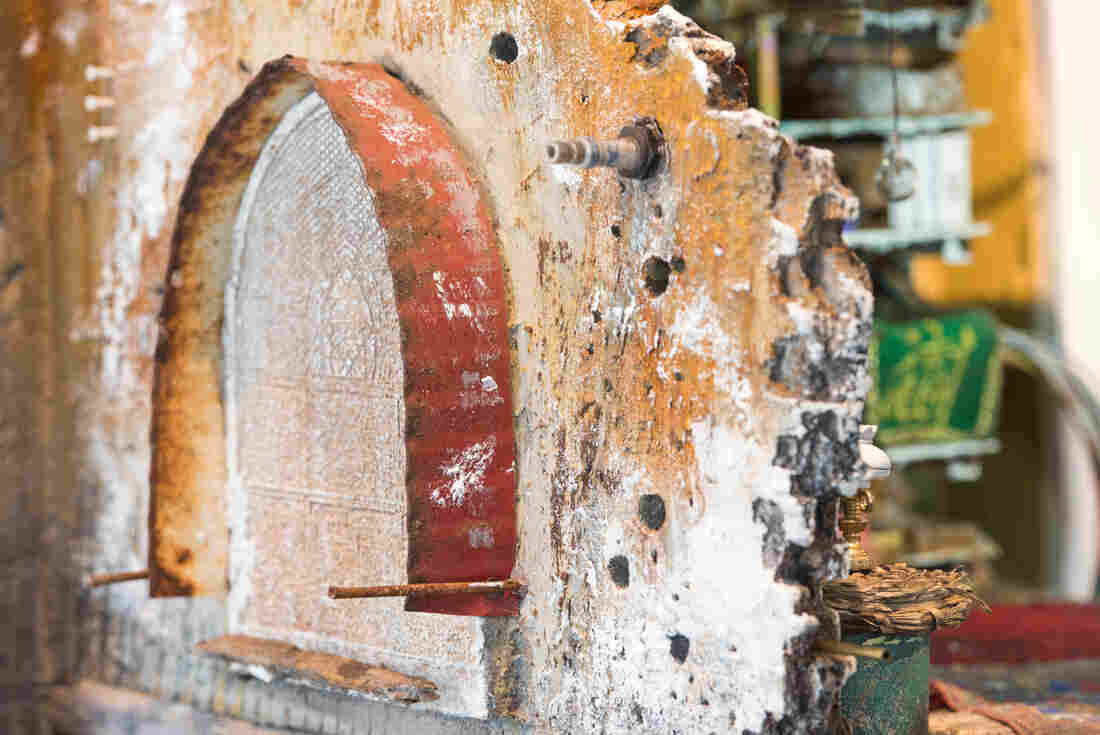 This basement scene of cozy cushions, prayer rugs and open books, surrounded by bare beams and rusty pipes, depicts "life in the face of destruction," says Badr. It was in this small room in Tehran that Fereshteh, born in Afghanistan but raised in Iran, presided over a secret school for undocumented Afghani children not allowed to attend state-run schools because of their immigrant status. Fereshteh is currently a professor of Farsi at New Haven College and studying for a nursing degree. The avocado green suitcase that houses Fereshteh's diorama belonged to her mother. Other suitcases in the exhibit were donated by families of refugees during the Nazi era. "It is the belongings of yesterday's [refugees] telling the story of today's," Hafez comments.

Diane Cole writes for many publications, including The Wall Street Journal and The Jewish Week, and is book columnist for The Psychotherapy Networker. She is the author of the memoir After Great Pain: A New Life Emerges. Her website is dianejcole.com