Accessibility links
Former Refugee Wilmot Collins Of Liberia Is About To Be Sworn In As Mayor Of Helena, Montana : Goats and Soda Wilmot Collins will be sworn in on Jan. 2. His victory in the mayoral election in Helena has made headlines the world over.

How A Liberian Refugee Got To Be A Montana Mayor

How A Liberian Refugee Got To Be A Montana Mayor 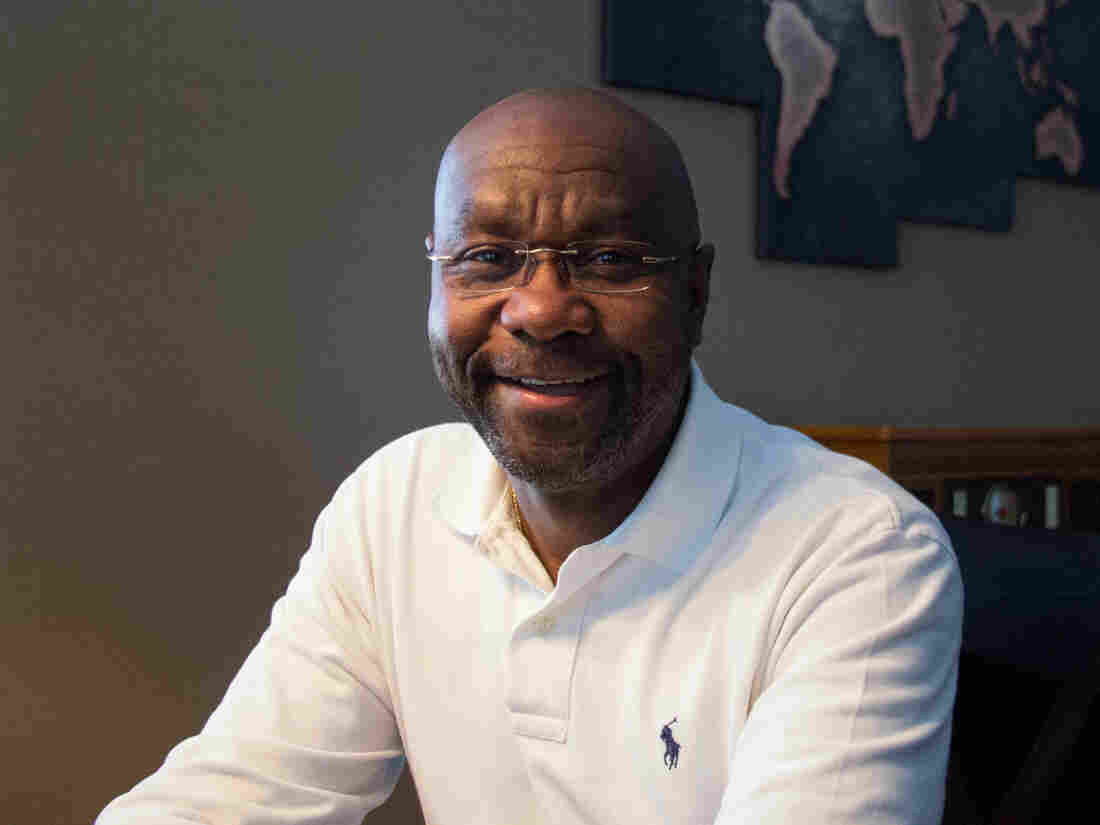 Wilmot Collins, the next mayor of Helena, Mont., came to the U.S. as a refugee during Liberia's civil war. Refugees are "not bloodsuckers," he says. "We are not just here to consume the resources. We provide for the economy." Corin Cates-Carney for NPR hide caption 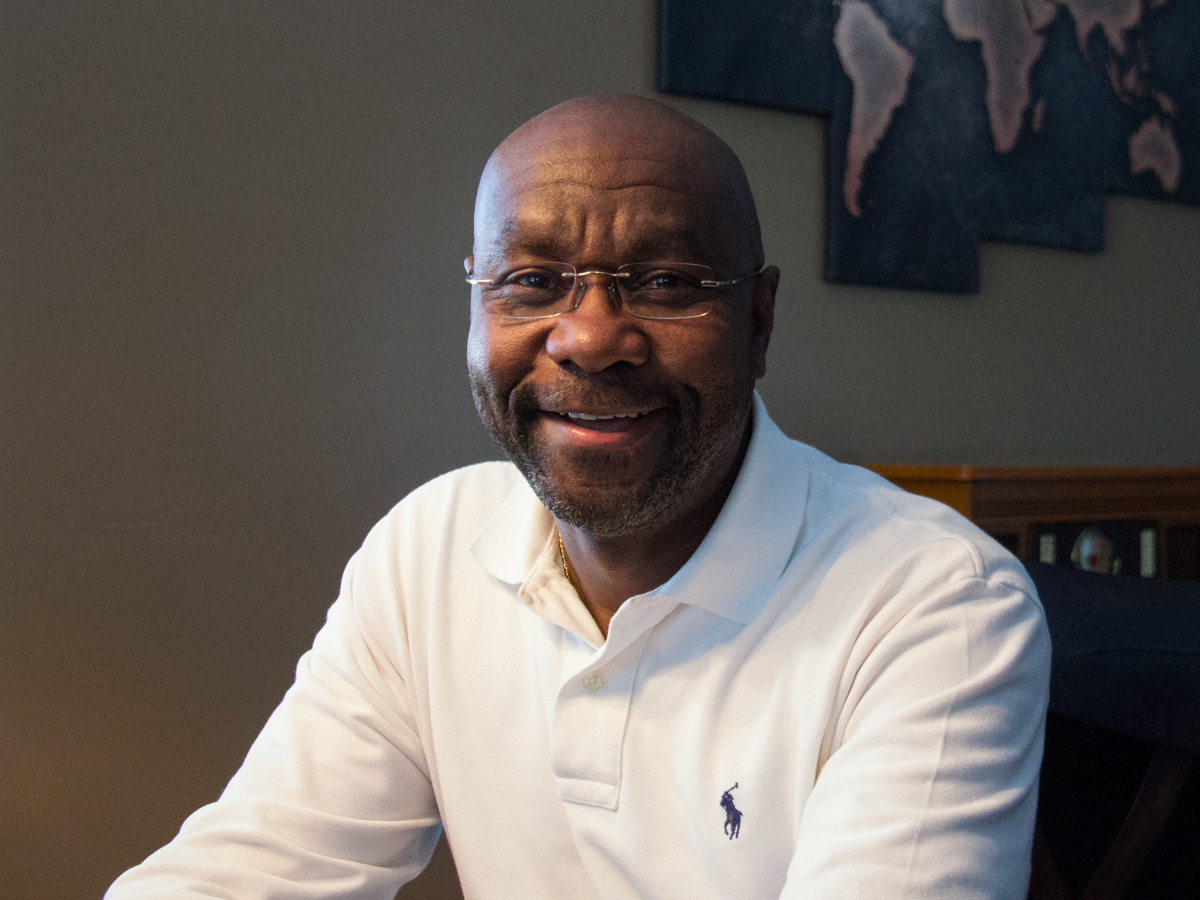 Wilmot Collins, the next mayor of Helena, Mont., came to the U.S. as a refugee during Liberia's civil war. Refugees are "not bloodsuckers," he says. "We are not just here to consume the resources. We provide for the economy."

In a year of anti-refugee sentiment in many corners of the world (and especially in the U.S.), one former refugee and first-time candidate ran for office — and won.

Twenty-three years before Wilmot Collins became the mayor-elect of Helena, Mont., he was a refugee from Liberia. He stood in a long line at the port of Monrovia, Liberia, waiting for a cargo vessel to carry him away from the country's civil war.

Running on a progressive platform this November, Collins unseated a four-term incumbent in the capital city of Montana, a state where just over half a percent of the population is black. Collins, 54, will be sworn in on Jan. 2.

"I ran on funding, trying to fund the providers of essential services like our police and our firefighters because we realize that there have been many occasions where our firefighters had not been able to answer calls ... because they were short-staffed," Collins told NPR shortly after the election. "So I went out and started campaigning on providing funding for essential services, and curbing our veterans and teenage homelessness. And it resonated with the voters."

Meet The Next Mayor Of Helena, Mont.

Meet The Next Mayor Of Helena, Mont.

His campaign was not an attempt to make a statement amid national and worldwide debate about the treatment and tolerance of refugees. But that's often how his story is perceived.

Now a child protection specialist for the Montana Department of Health and Human Services and a Navy reservist, Collins lives across the street from the school where he worked as a janitor upon arriving in Montana. When fleeing Liberia, he says he and his wife once had nothing to eat but toothpaste.

We talked with Collins at his home this month, sitting with him at his dining room table. The interview has been edited for length and clarity.

Were there preconceptions or prejudices that came up while you were running for office?

I hear that a lot. But I knocked on a lot of doors. I participated in every event, every forum that was held. The people of Helena were only concerned with issues in Helena. I don't think they were looking at me saying, "Whoa, this black guy in a predominantly white community." No, I think they were just looking at someone who wanted to serve.

Was there anything about your upbringing in Liberia that led you to want to be a mayor or a leader in a community?

What can Liberia learn from American politics?

I had an uphill battle because I was running against a very popular 16-year incumbent, a really decent person. But I was determined. And so, if I had to tell the Liberians anything, [it's that] they must first trust in their legal system. I would tell them to trust the legal system, and hard work and dedication will pay off. That's what happened here.

What was the reaction from your friends and family here and in Liberia when you won?

I've been getting congratulatory messages from everybody across the country — Texas, Florida, California, I mean you name it, Rhode Island. My friends were happy. We cheered. We divided cigars.

In Liberia, every newspaper carried the story. I got more calls from Liberia than anywhere else. I got a call on behalf of the [Liberian] president.

And then when I started getting the national media involvement, I was saying, "Oh geez. How is this happening?" I was only running a small Helena election campaign. I didn't think I was making history. I just wanted to be mayor.

Why do you think your story got so much national attention?

When I was running, I was not running as a refugee, but with what's been going on nationally with refugees I think it was good to know that all refugees are not what [critics] say they are. We're not bloodsuckers. We are not just here to consume the resources. We provide for the economy.

I've met so many refugees all around the country — doctors, nurses, social workers, poets, authors, dentists. You name it, they're all over the place. So while I would not say we are all model citizens, we're no different from the ordinary people. And so I guess that's why this thing hit national.

Have you experienced a change in your own identity as a Liberian man since moving to America and deciding to represent the people of Helena?

When I came to Montana, there weren't a lot — there still aren't a lot — of African-Americans or black people. And kids are curious. People are curious. They hear my accent and want to know where I'm from. And it's not because they want to degrade you, demean you or anything. When I can see that they genuinely don't know, I use the moment as an educational one. And when you feel accepted, you want to give back. You are motivated to be a part of that community. And I felt accepted.

Corin Cates-Carney covers politics and policy for Montana Public Radio. His works has appeared on NPR, The Atlantic, PBS and other outlets. Contact him @clccarney