Accessibility links
A 'Mini-Pillbox' Might Someday Deliver A Week's Worth Of Anti-HIV Drugs : Goats and Soda The idea is that a single capsule could deliver a week's worth of medication — contained in a six-pointed device that's folded up in a capsule. 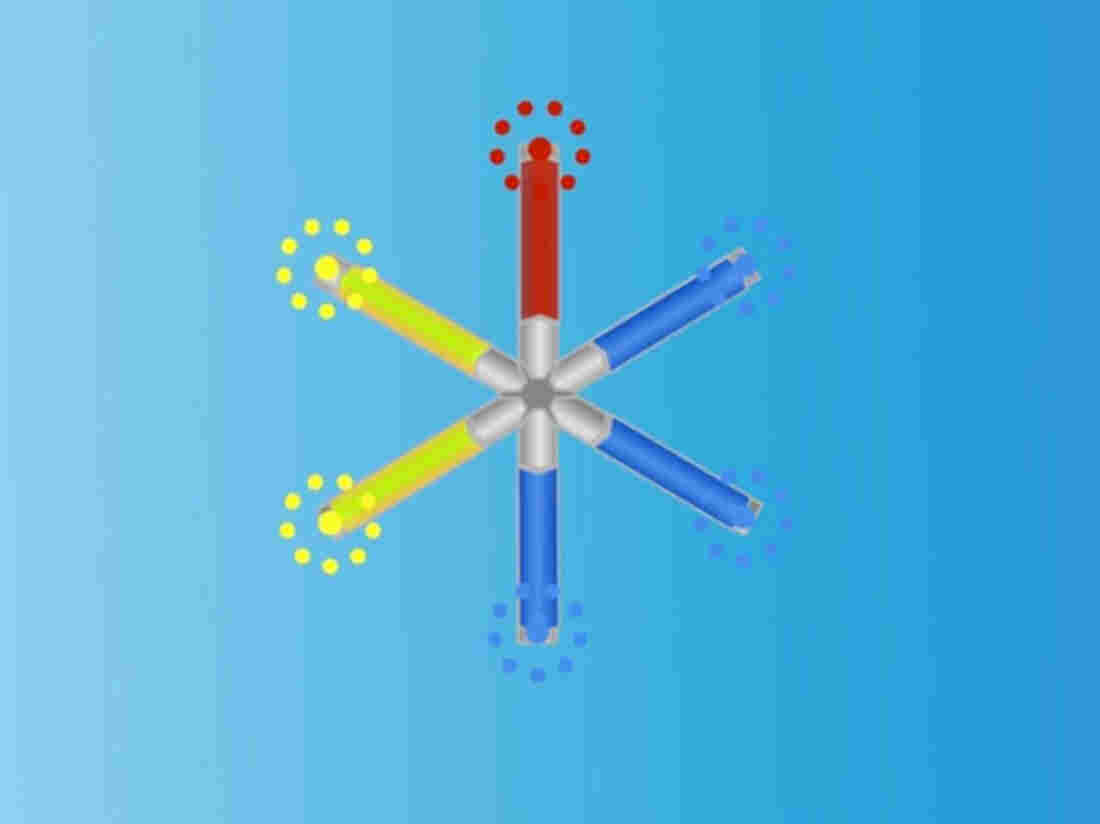 Researchers are working on a new way to deliver anti-HIV drugs. A six-pointed device (artist's rendering, above) folds up to fit inside a capsule. One swallowed, the capsule dissolves and the device opens up and slowly dispenses the medication. Partners Healthcare / Screenshot by NPR hide caption 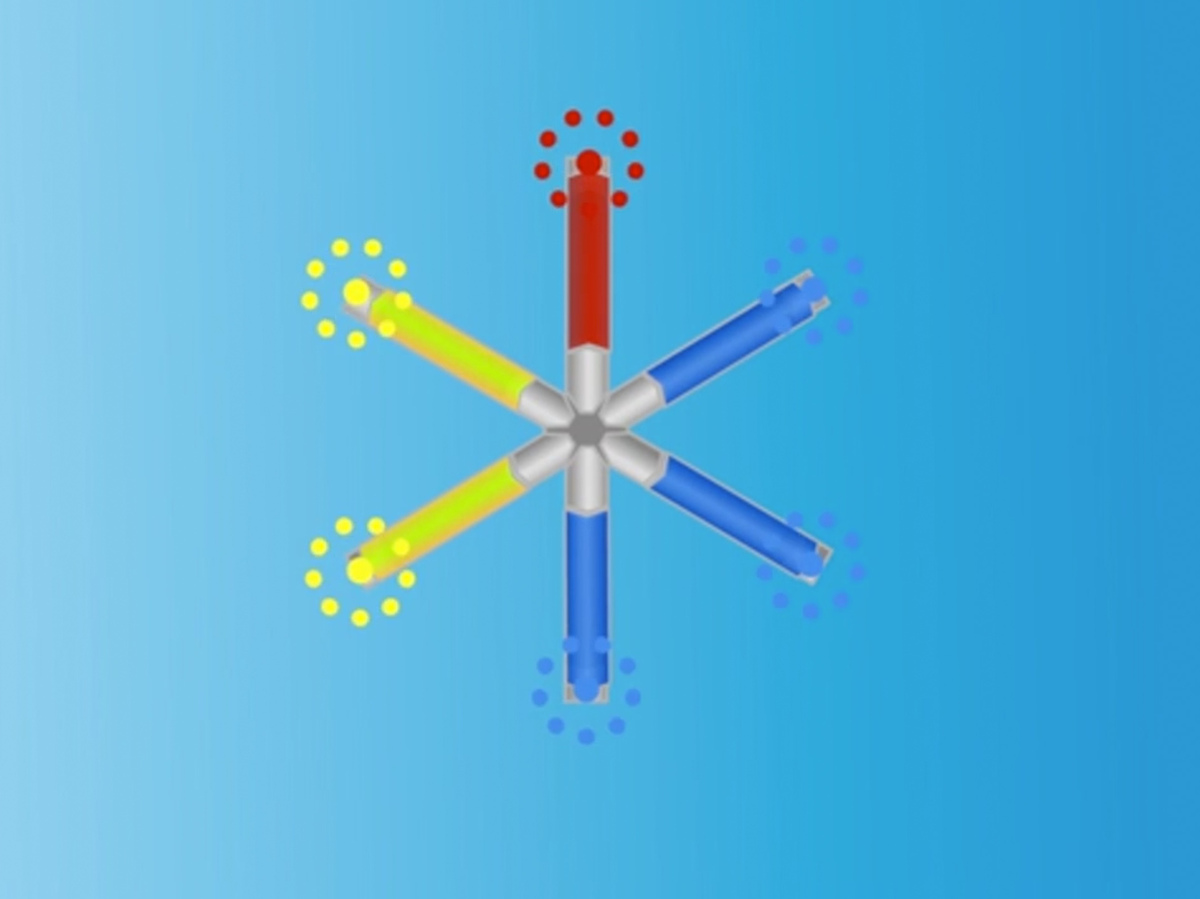 Researchers are working on a new way to deliver anti-HIV drugs. A six-pointed device (artist's rendering, above) folds up to fit inside a capsule. One swallowed, the capsule dissolves and the device opens up and slowly dispenses the medication.

Maybe you've bought 7-day pill boxes, some with digital reminders, others that talk to you ... not to mention apps that nag you to take your daily dose.

And still you forget your pills.

When the medication is antiretroviral therapy to treat an HIV infection, losing track of the dosing schedule is a life and death matter. These medications arrived like a medical miracle in 1996. Patients diagnosed with AIDS went from being handed a death sentence to knowing they had a chronic but treatable disease. If HIV/AIDS patients wanted a life expectancy equal to uninfected people, all they had to do was take their medicine — on schedule, every single day, no exceptions.

But people don't comply perfectly with their medication regimens, even when the stakes are as high as with HIV. "I think lack of adherence to therapy is the Achilles heel of HIV treatment," says Dr. Monica Gandhi, medical director of the HIV clinic at the University of California San Francisco (UCSF). Gandhi commented on, but was not involved with, a study published in today's Nature Communications.

In the paper, researchers describe how they developed and tested what they call a "mini-pillbox," swallowed once a week as a capsule that remains in the stomach for seven days while it releases daily doses of medications to combat HIV. The research was partly funded by the Bill & Melinda Gates Foundation, which is a funder of NPR and this blog.

The paper cited several studies showing that the average long-term adherence rate to life-saving AIDS drugs is 70 percent in both wealthy countries and the developing world. That means three out of ten HIV-infected patients regularly skip all or some of their pills.

"We can't change the patient, but we can change the capsule," says Dr. Giovanni Traverso, gastroenterologist at Brigham and Women's Hospital, biomedical engineer and an author of the paper. "The more infrequent the dose, the more likely the patient is to take the medication."

Researchers in medicine and engineering thought about shapes that could be folded and stuffed into a pill capsule. Rejecting a hexagon and other shapes, they came up with a delivery device in the shape of a six-pointed star that folds up to fit into a capsule about an inch in length and less than half an inch in diameter.

"The capsule looks like any capsule, but in the stomach the outer layer dissolves and the device inside opens up like a starfish," says Traverso. Each arm of the star is loaded with antiretroviral drugs that slowly release over a week's time. The device, about an inch and a half in diameter, is too large to pass through the stomach into the intestine. It releases medicine for a week before the star itself breaks down. The arms break off from the center and the segments are small enough to pass through the GI tract to be excreted.

So far, the weekly, slow-release treatment has been tested only in pigs because they have a stomach and digestive system similar to humans. The tests showed that the device worked as expected and released the proper amount of medication into the blood. "It's likely we'll complete human trials in 12 to 24 months. It could be available in the next few years," says Traverso.

Seeking better ways to help patients take their medicine is a crucial field of research for HIV patients, says Gandhi. "Any development that gets patients away from daily dosing makes it easier to adhere to therapy. Once a week is better than daily. We would hope it could get down to once a month. An even better dream would be an implant under the skin that could release medications for a year."

Taking prescribed drugs properly is important in any disease. A December 4, 2012 study in the Annals of Internal Medicine found that when patients suffering any illness in the U.S. don't take their medications properly, they get sicker, are hospitalized more often and die sooner. Failing to take medications properly ends up costing the health-care system between $100 billion and $289 billion a year, the study found.

Poverty, war, inadequate health systems, mental illness or substance abuse can make it difficult or impossible for people to keep up their daily medication routine. But with AIDS, patients may have started taking their health for granted. The specter of inevitable death from AIDS is a 20-year-old memory. "People have lived a long time with HIV. They just don't think it's anything to worry about. They don't feel symptoms of disease," says Gandhi. "The fear factor is gone."

For HIV/AIDS patients, near-perfect compliance can mean taking multiple drugs twice a day without missing or substantially delaying a dose more than three times in a month, according to UCSF research. The consequences for not meeting that standard are weakened immune systems for patients and the possibility that restarting the medications will result in the development of a strain of the virus that no longer responds to treatment.

If they follow their drug regimen perfectly, a patient's viral load — the amount of HIV in their system — can be reduced to an undetectable amount. And that means they can no longer transmit the virus to others, according to the Centers for Disease Control and Prevention. But when patients fail to take their medications properly, their viral load rises and they can once again infect others.

"The reason we study adherence so avidly is that, unlike other diseases, taking HIV medications has implications for both personal health and public health," says Gandhi. "I commend these researchers for thinking creatively."

That creative thinking could help patients with heart disease, diabetes, cancer or any disease requiring daily medication. A similar device to help prevent malaria and containing a slow-release drug toxic to mosquitoes has already been tested in pigs, Traverso says. "And the star might some day be useful for Alzheimer's patients, where the disease itself impacts the ability of the patient to take medication."