Accessibility links
With Pakistan Close To Wiping Out Polio, Two Vaccinators Are Gunned Down : Goats and Soda We talk to a key official in the country's anti-polio effort to learn more about the slaying — and its impact on the campaign to wipe out the disease.

Pakistan Raises Its Guard After 2 Polio Vaccinators Are Gunned Down

Pakistan Raises Its Guard After 2 Polio Vaccinators Are Gunned Down 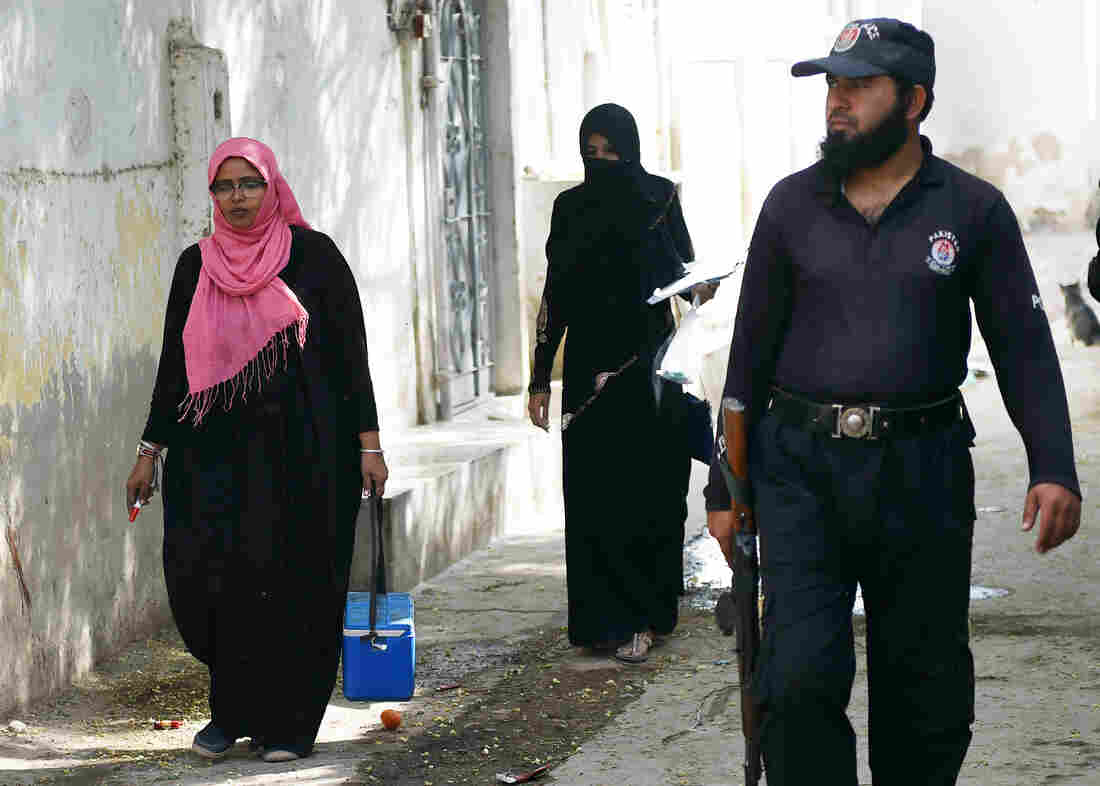 A Pakistani policeman guards a team of polio vaccinators during an immunization drive in Karachi on January 22. Officials have stepped up protection in the wake of the January 18 attack. Rizwan Tabassum/AFP/Getty Images hide caption 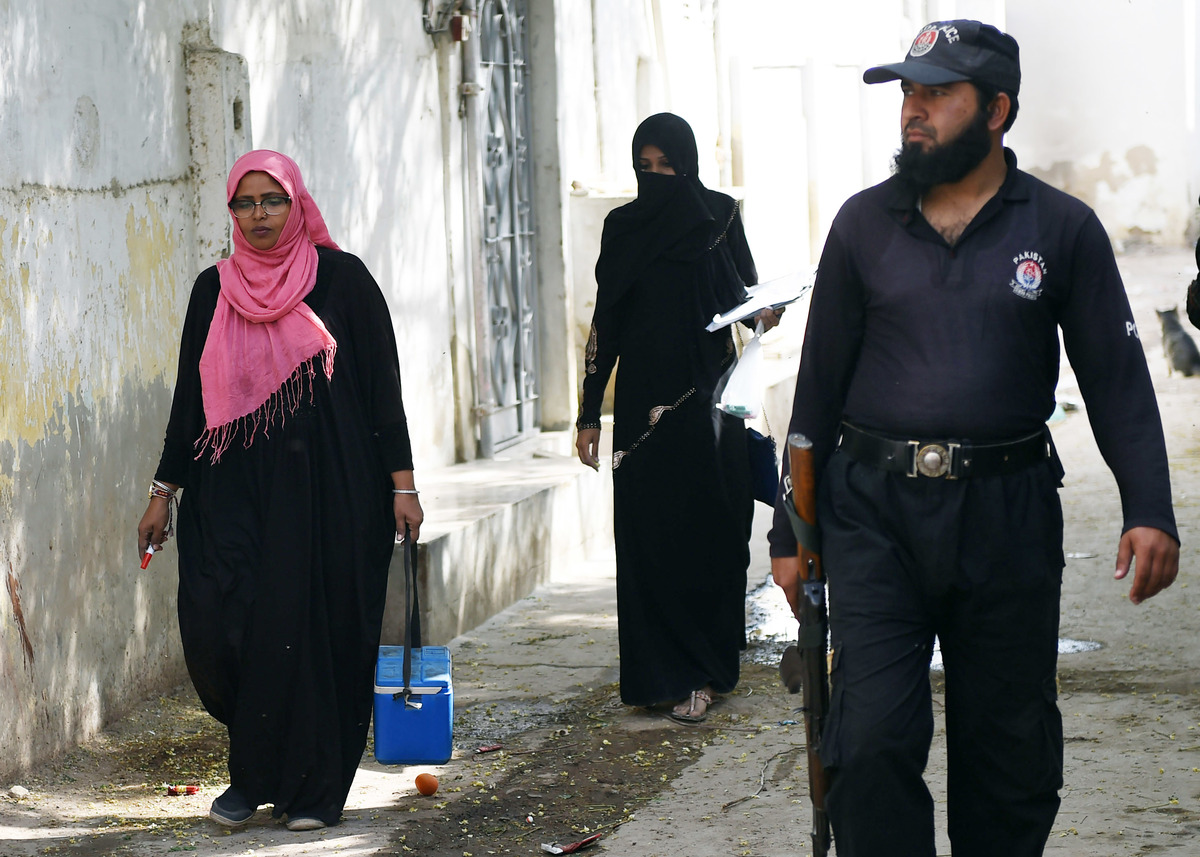 A Pakistani policeman guards a team of polio vaccinators during an immunization drive in Karachi on January 22. Officials have stepped up protection in the wake of the January 18 attack.

Pakistan's latest polio eradication drive got off to a tragic start last week when gunmen killed a mother-daughter vaccination team in the Western city of Quetta. Sakina, 38, and her 16-year-old daughter, Rizwana, were administering immunization drops to children when the assailants sped past on a motorbike and shot each woman in the head. (Like many people in Pakistan, Sakina and Rizwana only went by a first name.)

The attack has cast a shadow over what was supposed to be a milestone year for Pakistan. Last year the number of newly confirmed polio cases there dropped to just eight. So in 2018, public health officials had been saying, just maybe Pakistan would finally bring its new caseload down to zero — leaving Afghanistan as the only remaining country in the world where the wild virus is still transmitted.

How will the attack affect those chances?

NPR spoke to a key official in the operation, Aziz Memon, chairman of the Karachi-based Pakistan Polio Plus Committee, an affiliate of Rotary International. The group is one of several organizations, including the World Health Organization and UNICEF, that partners with Pakistan's government in its funding, training and deployment of the vaccination teams.

Can you describe the context in which this attack took place? How is the polio eradication effort conducted in Pakistan these days?

"We do four national immunization drives a year," says Memon. "It's a big effort with 110,000 vaccination teams for each round." The teams fan out to communities across the country. The aim is to ensure that about 38 million children under age 5 have gotten all three of the required doses of the oral polio vaccine.

Webcast: Can The World Finally Wipe Out Polio?

"The drive lasts for three days, with another [few] days to catch up with children who might have been missed. This [most recent drive] started on Jan. 15 and the attack occurred on day four — a catch-up day."

There's a history of attacks on vaccination workers and their police guards in Pakistan — with more than 100 killed in the last five years. Yet these women were not provided with security. Why?

"It was a lapse," says Memon. Pakistan's own security protocols have long required officials to provide a police escort. The trouble is that officials relaxed their vigilance due to a recent waning of attacks. The last one was about two years ago, when a suicide bomber detonated his explosives near a polio center in Quetta, killing multiple police officers and an official.

For so long, he says, "we didn't have any incidents. So the security instructions get shelved and people start taking it easy. It's like when it's raining you open the umbrella. And then when it stops raining you close it. It's human error."

Does this latest attack suggest we could see a renewal of frequent violence against vaccinators?

Memon doesn't think so, because, he says, there's a key difference between this latest incident and those of the past.

The latter were motivated by a specific animus against vaccinators. Several Islamist preachers and militant groups — including factions of the Taliban in Pakistan — were promoting the idea that the vaccinators were part of a plot to kill or sterilize Muslims. As a result many communities met vaccination teams with suspicion and even outright hostility, particularly in the northern and eastern border areas where the militants have held sway. And the distrust only deepened after the revelation in 2011 that U.S. intelligence forces had used a vaccination campaign against hepatitis as cover to gather information during the hunt for Osama bin Laden in northwest Pakistan.

But "that's over. We have left that behind," says Memon — in part thanks to a concerted effort by the government and aid groups to reach out to the public and key community leaders, including several prominent clerics who have spoken out in favor of polio vaccination drives.

Memon speculates that, by contrast, last week's shooting was the work of anti-government militants who are not opposed to vaccination per se but who are looking to attack targets associated with government authority. Although no one has claimed responsibility, Memon considers it revealing that an hour earlier that same day, two policemen were killed in a separate shooting in Quetta. "And yesterday another policeman was killed. These miscreants just want to do something by which they can get news headlines."

If so, they certainly achieved that by targeting vaccinators. "If you look at the local newspapers that day, the headlines were 'Two vaccinators killed.' And below in small words, 'Two policemen also killed.'"

"So this is what these miscreants like. They say that, 'if we touch a polio vaccinator we create headlines.'"

But doesn't this mean that vaccinators are, in fact, once again at great risk? And at the very least, won't that make it hard to recruit workers for future drives?

Memon says that now that officials are once again attuned to the threat, they are ensuring that all vaccinators are provided with the required security.

A full test may come in about a month and a half. Quetta is one of several places at higher than average risk for polio transmission where the nationwide drives are supplemented with two additional ones.

But Memon notes that the shooting has not disrupted the catch-up phase of the current drive there. And he says he traveled to Quetta earlier today to check in with the teams and heard no complaints. "They are safe. They are working," he says. "I was with them the whole day today and the resolve is there and they will continue the work."

What has been the impact on the family of the two vaccinators who were killed? Is anything being done for their surviving relatives?

"I met [Sakina's] husband today and spent some time with him," says Memon.

"It was very sad," he adds. In addition to the daughter who was killed alongside Sakina, she had six children, including a one-year-old, and very limited means to support them. Sakina was being paid $150 per month for her work as a vaccinator. Her husband has been driving trucks for a living.

"We're trying to collect enough to maybe buy him a truck so that he can become an entrepreneur and start earning a better livelihood," says Memon.

He says he feels a special responsibility to make sure that the government and anti-polio organizations follow through on delivering help to the children of slain vaccinators: "They do such noble work for us. We have to be with them. It's our duty."