Accessibility links
13th Case Of Child Rape And Killing Sparks Riots In The Pakistani City Of Kasur : Goats and Soda The rape and slaying of 7-year-old Zainab Amin caused a political crisis aimed at officials who are accused of failing to protect the children of Kasur. 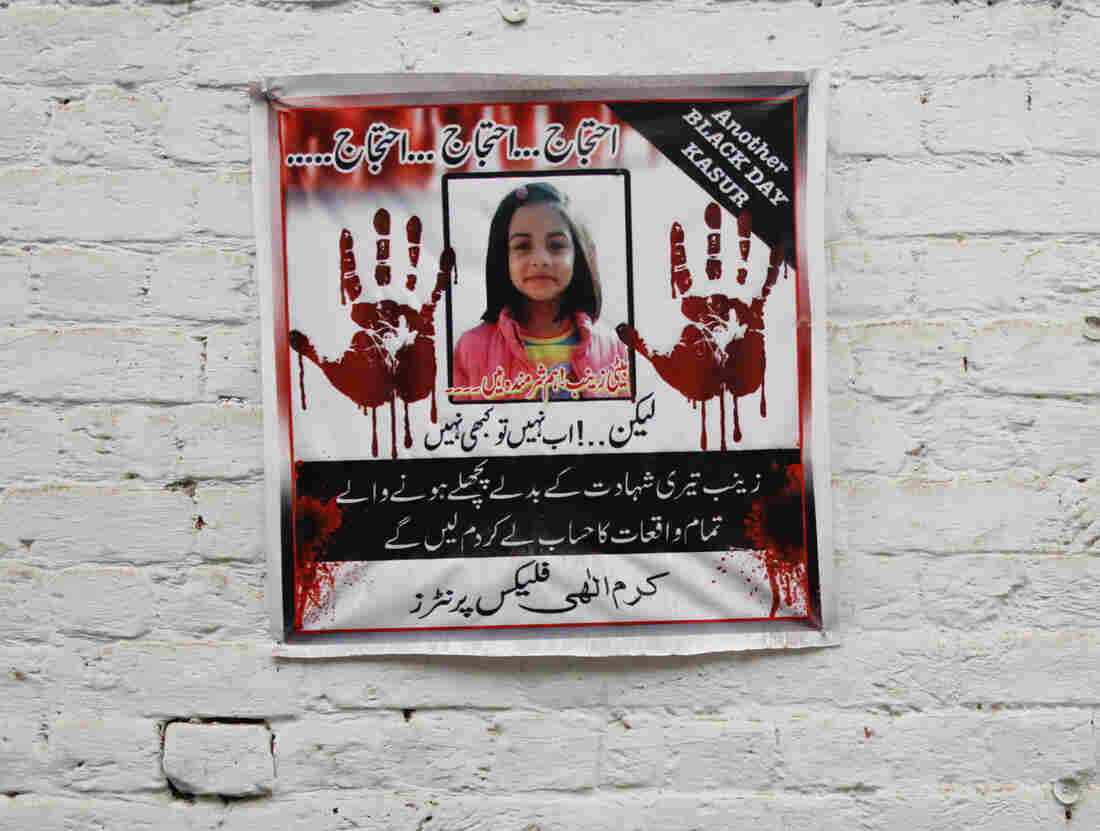 A poster in Kasur, Pakistan, includes a picture of Zainab and the message: "Protest. Protest. Protest. Daughter Zainab, we are ashamed. But if not now, then never. Zainab, in light of your martyrdom, we will seek accountability for all similar events in the past. We will not rest without that." Diaa Hadid/NPR hide caption 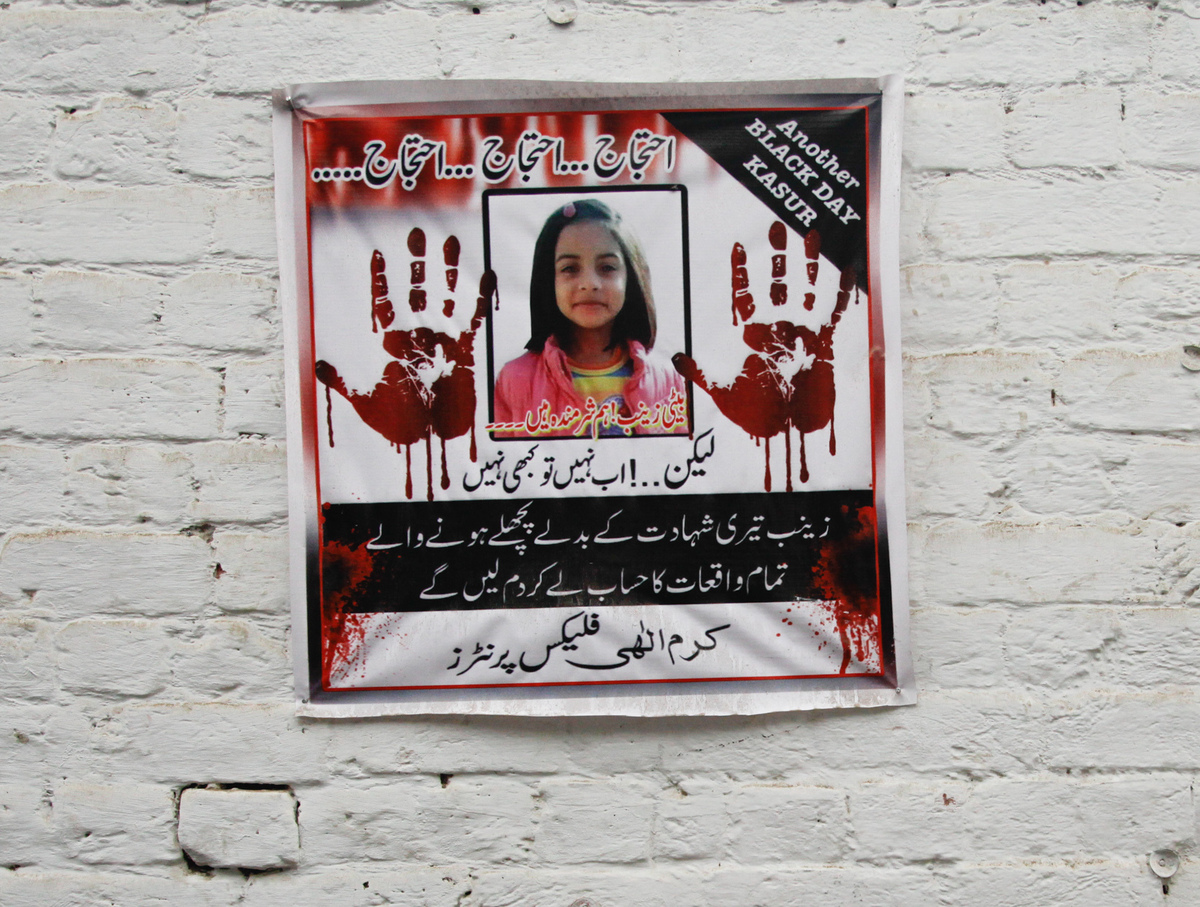 A poster in Kasur, Pakistan, includes a picture of Zainab and the message: "Protest. Protest. Protest. Daughter Zainab, we are ashamed. But if not now, then never. Zainab, in light of your martyrdom, we will seek accountability for all similar events in the past. We will not rest without that."

In January, 7-year-old Zainab Amin's parents were on a religious pilgrimage in Saudi Arabia when their relatives back in Pakistan called with the news: Their daughter didn't make it to her evening Quran lesson.

"Stay where you are," the father, Amin Ansari, recalls a relative telling him. "Your prayers are answered there."

Her mother, Nusrat, says she sat in the Prophet Mohammad's mosque in Medina, praying: "Oh God, keep Zainab safe and protected. Oh God, I have come to your door like a beggar. Oh God, please do not send me away empty-handed." 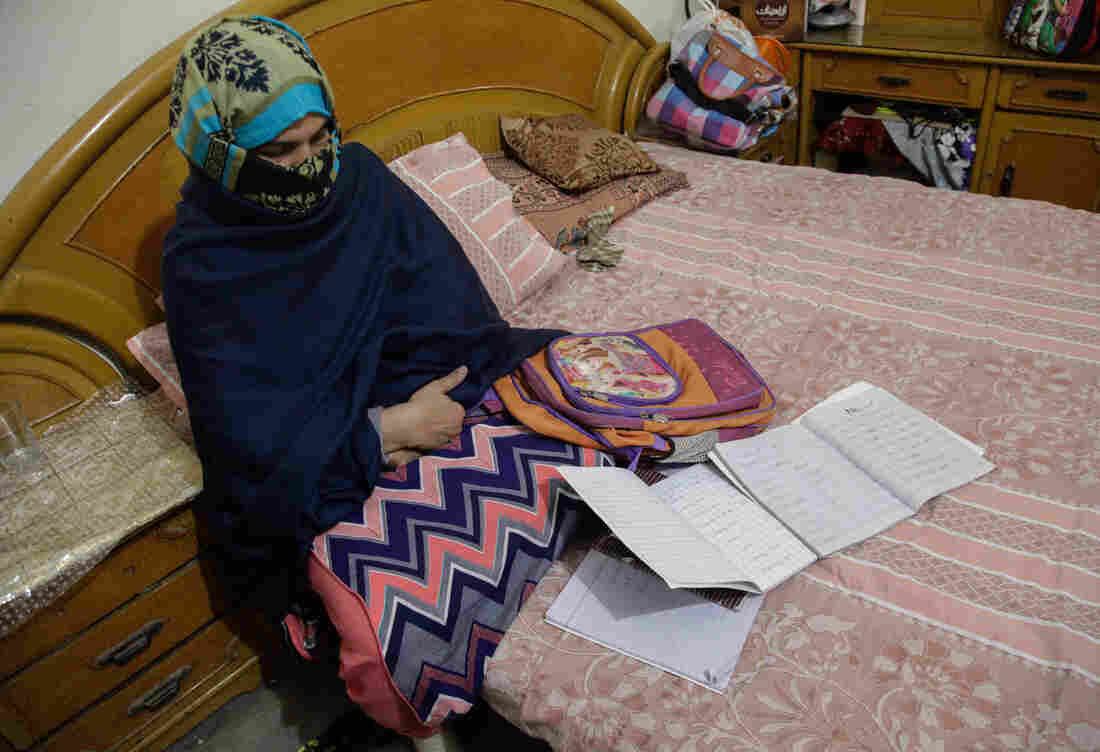 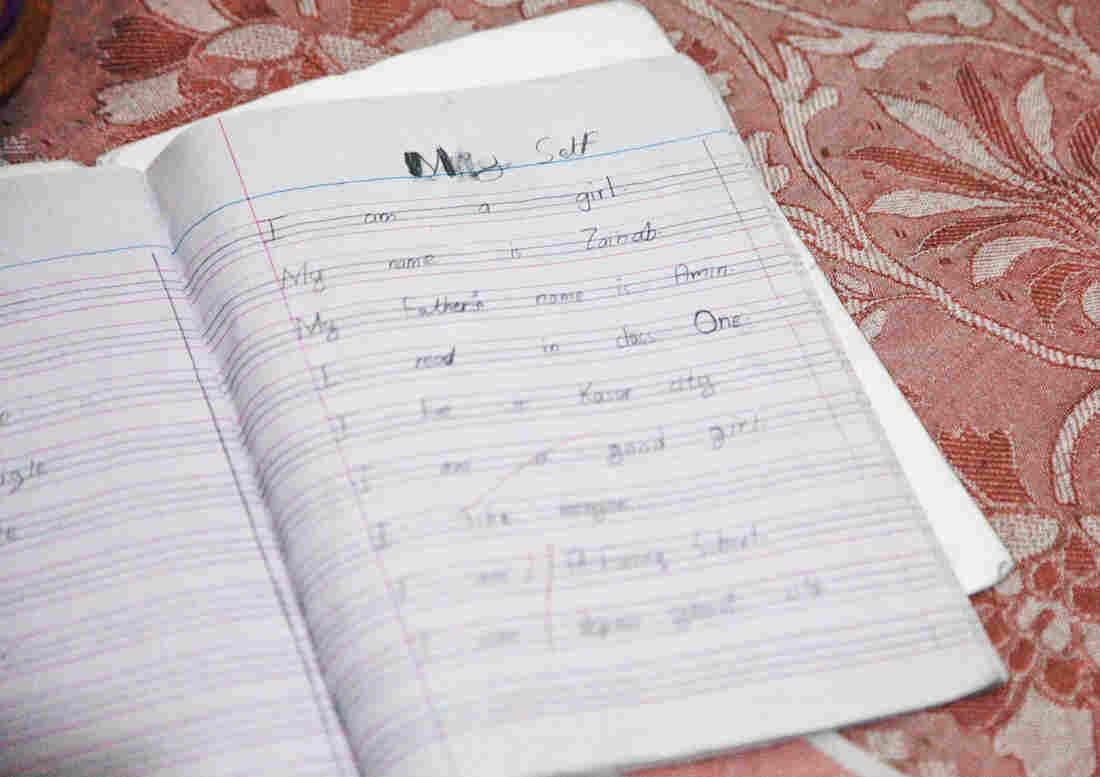 Zainab's last entry in her English class notebook reads, in part: "My name is Zainab ... I live in Kasur city. I am a good girl." Diaa Hadid/NPR hide caption

Once famed for its Sufi shrines, Kasur, Pakistan, is now synonymous with darkness. During a period of two years, at least 13 children have been raped and killed in this city of less than a million people in Punjab, Pakistan's most populous state.

Residents' anger finally exploded when Zainab went missing — snowballing into a political crisis that has forced officials to act.

Most of the children who disappeared in Kasur before Zainab did were from poor families who had little influence. But Zainab's family was different. They are conservative, middle-class Muslims. Zainab's father is a bearded, neatly attired civil servant. Her mother is a schoolteacher.

Zainab's cousin, who is about her age, was supposed to keep an eye on her as they walked to class. But he lost sight of her in a crowd of kids. Her relatives frantically searched for her. A nearby shop gave them closed-circuit TV footage showing her walking with a young adult male. They tweeted it out, asking for help, alongside an image of Zainab: a green-eyed little girl wearing a pink jacket. 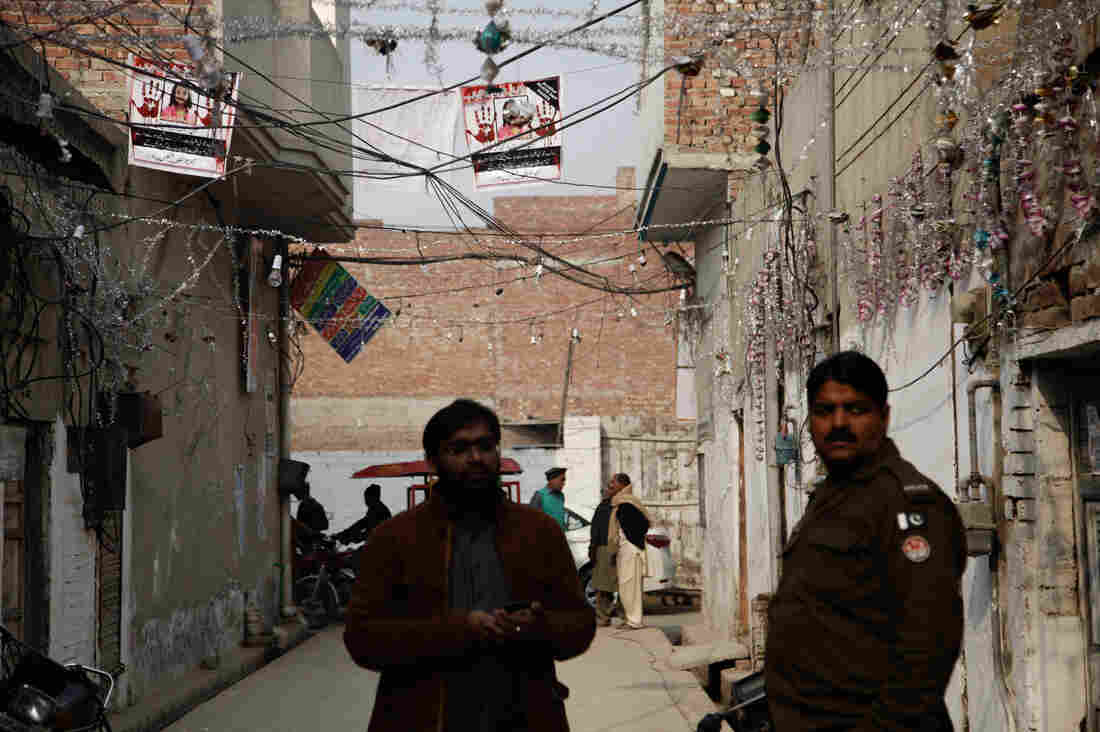 The posters with Zainab's photo and calls for justice are strung outside her home in an alleyway in Kasur. Diaa Hadid/NPR hide caption

Horrified Pakistanis followed her disappearance on social media. News organizations rushed in, following every development. Audiences identified with "that sweet little child's face," says Amber Rahim Shamsi, host of a local television program, Newswise, that followed the case. "People could relate to her, and feel it — feel the pain."

The pressure of Kasur's residents may move Pakistan's institutions closer to protecting its children. And residents have put police and politicians on notice that Pakistanis appear increasingly willing, and able, to demand change.

"They got encouragement," says Waqas Abid, a lawyer who leads a human rights group, the Good Thinkers Organization. "People are hopeful now the situation will change."

Residents found Zainab's body on Jan. 9. They immediately began tweeting two contrasting images: her smiling face alongside her crumpled body dumped on the trash heap where she was found. 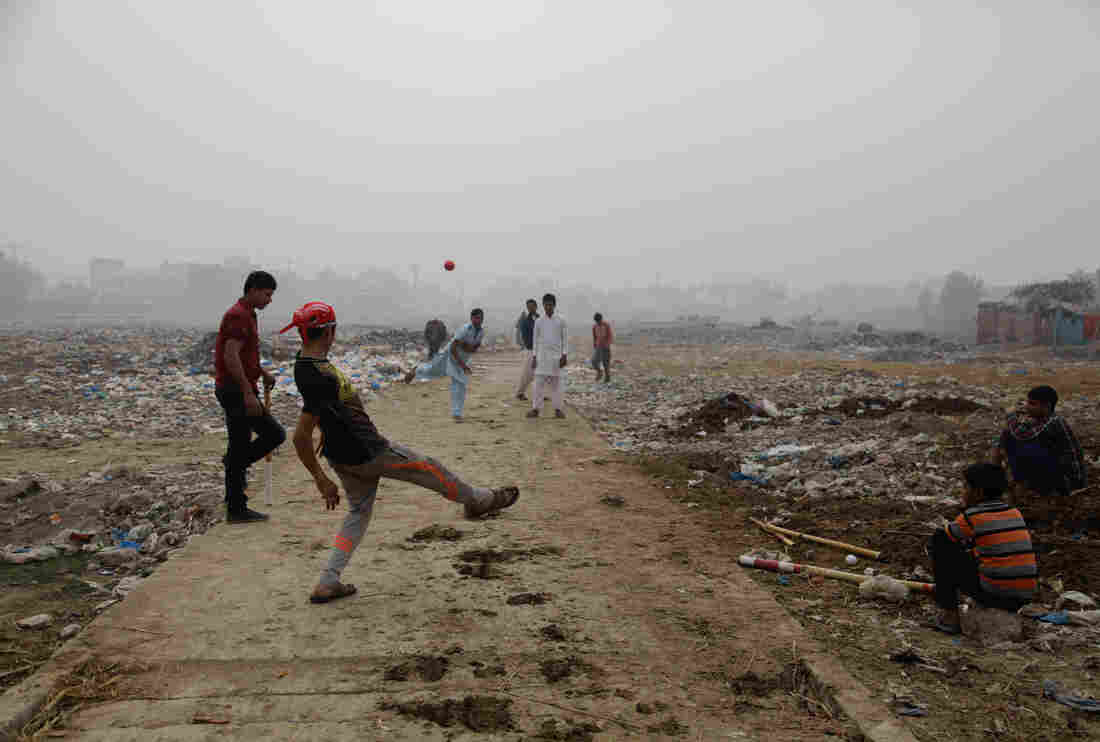 Youths play cricket in a trash field near where Zainab's body was found on Jan. 9. Diaa Hadid/NPR hide caption

Enraged that police had not saved Zainab, the men of Kasur rioted. They smashed police cars and tried to set fire to the local stations. Prominent religious leaders opposed to the state government led Zainab's funeral prayers. Legislators and celebrities began demanding the reinstatement of public hangings for rapists.

Elections are expected later this year in Pakistan, and the chief minister of Punjab, Shehbaz Sharif, is a lead contender to become the next prime minister. The death of Zainab became a political crisis.

His government shipped in teams of police, psychologists and forensic experts. They recruited civil servants to take DNA swabs from hundreds of men.

Police arrested Mohammad Imran in Zainab's killing on Jan. 23. He lived near the Amin family home. Police said he admitted to raping eight boys and girls, and to killing six of them.

The national furor whipped up around Zainab's death may have left some impact, however modest. In Pakistan, it had been seen as shameful to talk about sex abuse. But after Zainab's disappearance, some prominent Pakistani women spoke publicly about what they endured as children. A few dozen families across Pakistan also came forward to report that their children were abused, according to Sahil, a children's rights organization.

"I think stories like this do have an impact," Newswise's Rahim Shamsi says. "People are talking about it more openly. You have very influential current affairs programs where they're actually discussing how to change the system or educate parents and children."

Zainab's killing also reflected a broken system that has failed children. Residents say that the police — whom they describe as inept, corrupt and indifferent — are at the fulcrum of Kasur's dysfunction.

Zainab's father ticks off previous cases of children being killed in Kasur, and yet, he says, "the police didn't have a single clue or piece of evidence."

"If she had been the daughter of a prime minister, or the minister, they would have made hectic efforts." 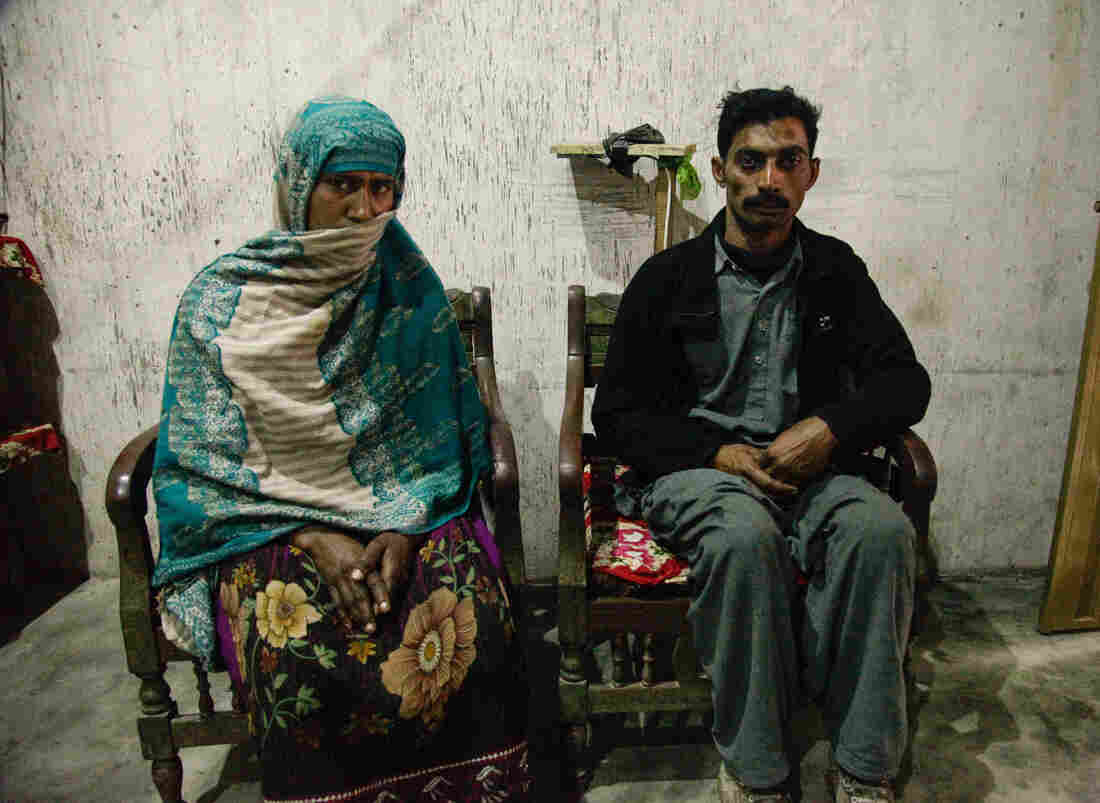 A year and half ago, Ghafura and Abed Ali's 4-year-old daughter was snatched after she purchased a balloon from a nearby shop. The next day, she was found, barely alive, raped and dumped in a trash heap. Diaa Hadid/NPR hide caption

Police in the Kasur region have been censured before. In 2015, Pakistan's largest pedophile ring was uncovered. It involved more than 280 boys and girls in a village just miles from the city. And months later, in 2016, children began disappearing in Kasur, their bodies emerging in trash heaps, construction sites and cornfields.

They included Noor-Fatima, the 6-year-old daughter of a barber, Mustafa. Like many rural Pakistanis, he goes by one name. On April 4, Noor-Fatima went to buy milk from a shop around the corner from their home. It was dark, and there was a routine power cut. They found her the next evening in a construction site. 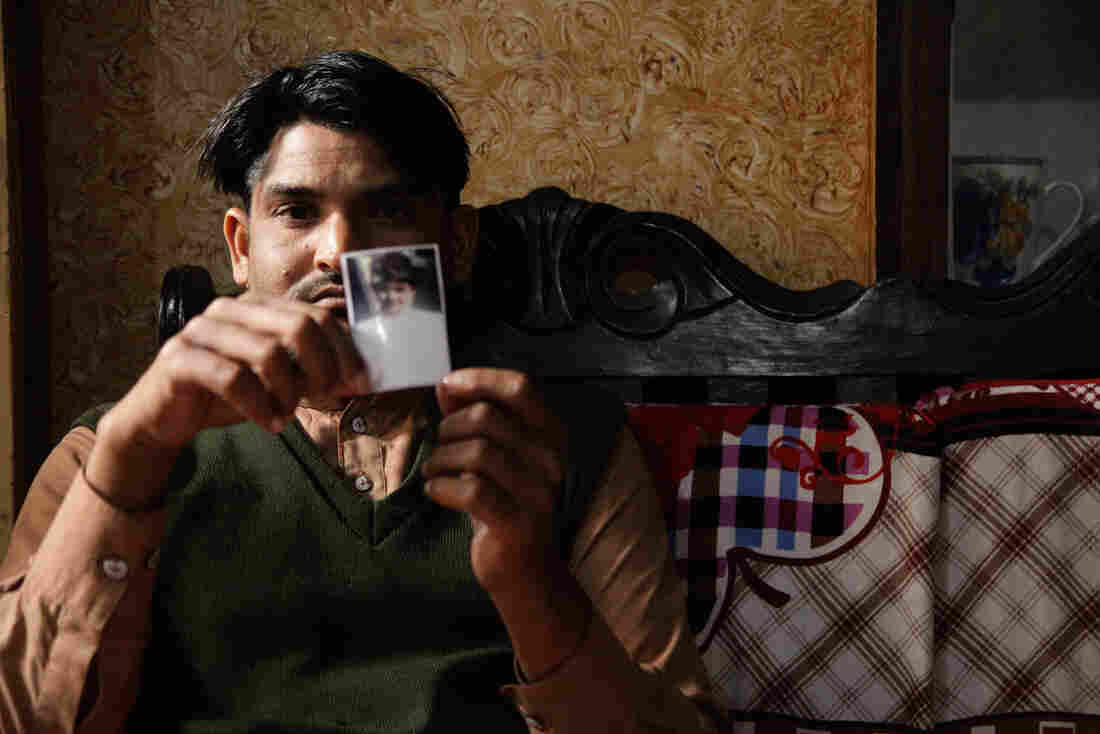 Mustafa, a barber in Kasur, holds the only image he has of his daughter, Noor-Fatima. About a year ago, he sent the 6-year-old to buy milk. She was found the next day, raped and killed, her body dumped in a construction site. Diaa Hadid/NPR hide caption

Mustafa says that for months afterwards, he visited the police to see whether there were any developments on the case. "They said, 'Inshallah,' " he says. That's Arabic for "God willing" — and shorthand for doing nothing.

But at a police station still reeking of smoke from when residents tried to burn it down, officers reject the accusation that they are indifferent or corrupt. One officer says the state has not given them proper resources to investigate murder cases. He says DNA tests were taking months to process — until the riots, at which time the government then ensured they only took days.

Another officer says police are not able to protect children alone.

"Parents should take responsibility. They shouldn't leave their children alone," he says. But children are indeed left alone — including the young boy who works in a nearby teahouse and is serving the officer tea as he speaks. 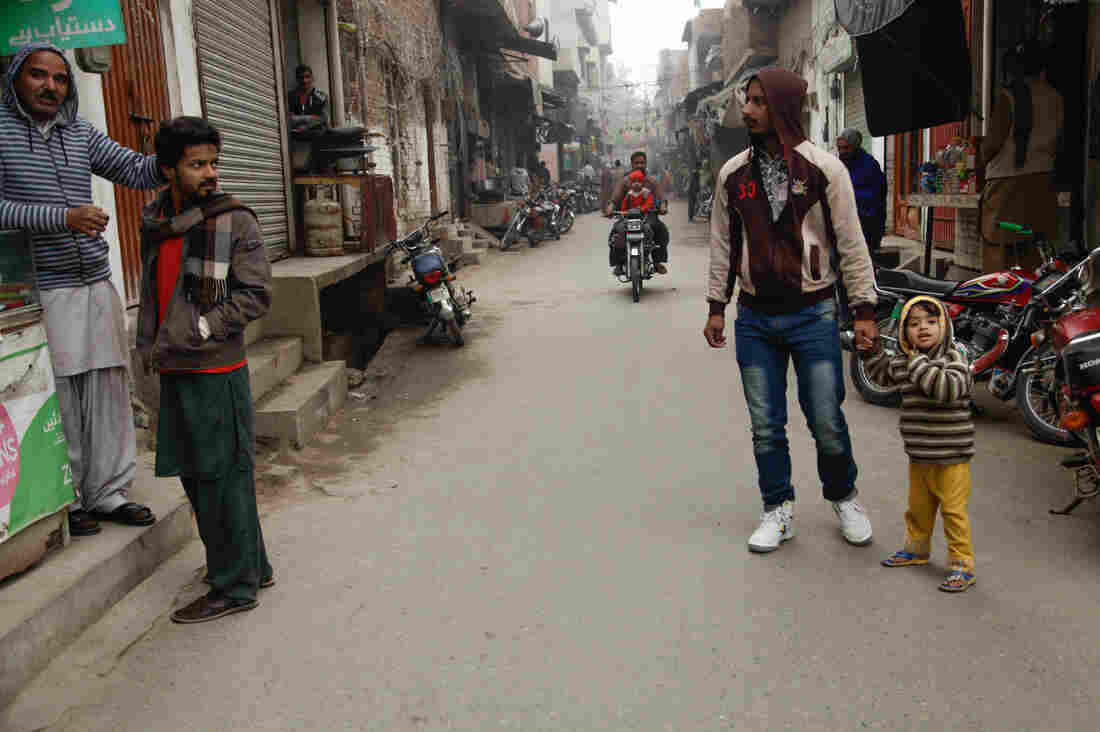 Both officers spoke on the condition of anonymity because they weren't authorized to talk with media.

Acknowledging residents' anger, the Kasur district police officer says the force will do better in the future.

"God forbid, if such crimes are committed, we are in a better position," says Zahid Nawaz. But, he insists, the police are not corrupt or inept. Before, they didn't have the necessary experience, he says. "Police did its job. Police have interrogated so many criminals."

In hindsight, there were clues leading to Imran, 23, the construction laborer who confessed to killing Zainab and five other children.

Two neighbors say he liked to stand on the roof of their building to watch the girls in the pink-painted primary school across their alley. A schoolteacher, who the neighbors said was named Fawzia, complained twice about it — once to Imran's family and once to his neighbor, 32-year-old Shafia. Like many rural Pakistanis, she only has one name.

Shafia says that around the same time, she also noticed that Imran enjoyed standing outside her flat, trying to motion schoolgirls to come with him. It frightened her, and she banned her four daughters from playing outside.

Imran's other neighbor was his 32-year-old aunt, who has two daughters. She says he would often sit on her rooftop, which overlooks the school. She says told him not to stand close to the edge because the teachers could see him there. She requested that her name be withheld because of fear of retribution.

"I thought it was eve teasing" — slang for the sexual harassment of women in South Asia, which many consider expected behavior for young men.

But there's another side to this story: the fear that the police may sometimes go too far.

Mohammed Siddiqui lives with his family in a tattered tent in the trash-filled field where Zainab's body was dumped. They make their living selling recycled cardboard. The father, Mohammed, says he hasn't been able to sleep since Zainab died.

"I, too, have daughters," he says, pointing to his girls, Ghulam-Fatima and Gul-Fatima. But he does not trust the police to protect them; it's easier to round up poor residents and bully them into fast confessions, he says.

He believes that is what has happened to his own son, Ghulam-Abbas, whose age he estimates at 12. Siddiqui says his son has been in police detention for the past year. He says Ghulam-Abbas was hung upside down, electrocuted and forced into a confession. Police confirm the boy is detained. They say he is 15 years old and deny he was tortured.

The crime he is accused of: the rape and murder of a 7-year-old boy.