Accessibility links
The Milkmaid Who Supposedly Inspired The Smallpox Vaccine Was A Myth : Goats and Soda As history tells it, young Edward Jenner heard a milkmaid say she'd had cowpox so couldn't get smallpox. And thus his idea for a vaccine was born. Now a researcher has fact-checked the tale.

What's The Real Story About The Milkmaid And The Smallpox Vaccine?

What's The Real Story About The Milkmaid And The Smallpox Vaccine? 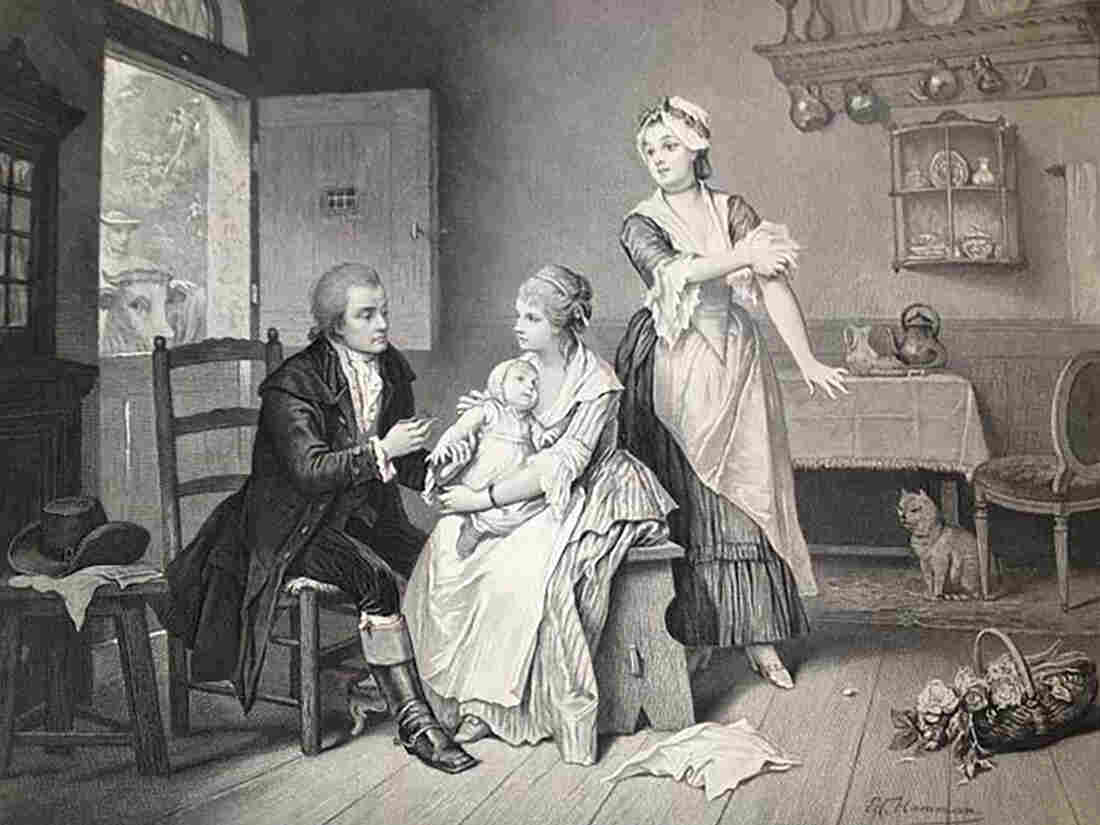 As history tells it, young Edward Jenner heard a milkmaid brag that having cowpox made her immune to smallpox. And years later, as a doctor, he drew matter from a cowpox pustule on the arm of a milkmaid to vaccinate a young test subject (depicted in the drawing above). A researcher now weighs in on the veracity of the milkmaid stories. The New York Academy of Medicine Library (nyamcenterforhistory.org) hide caption 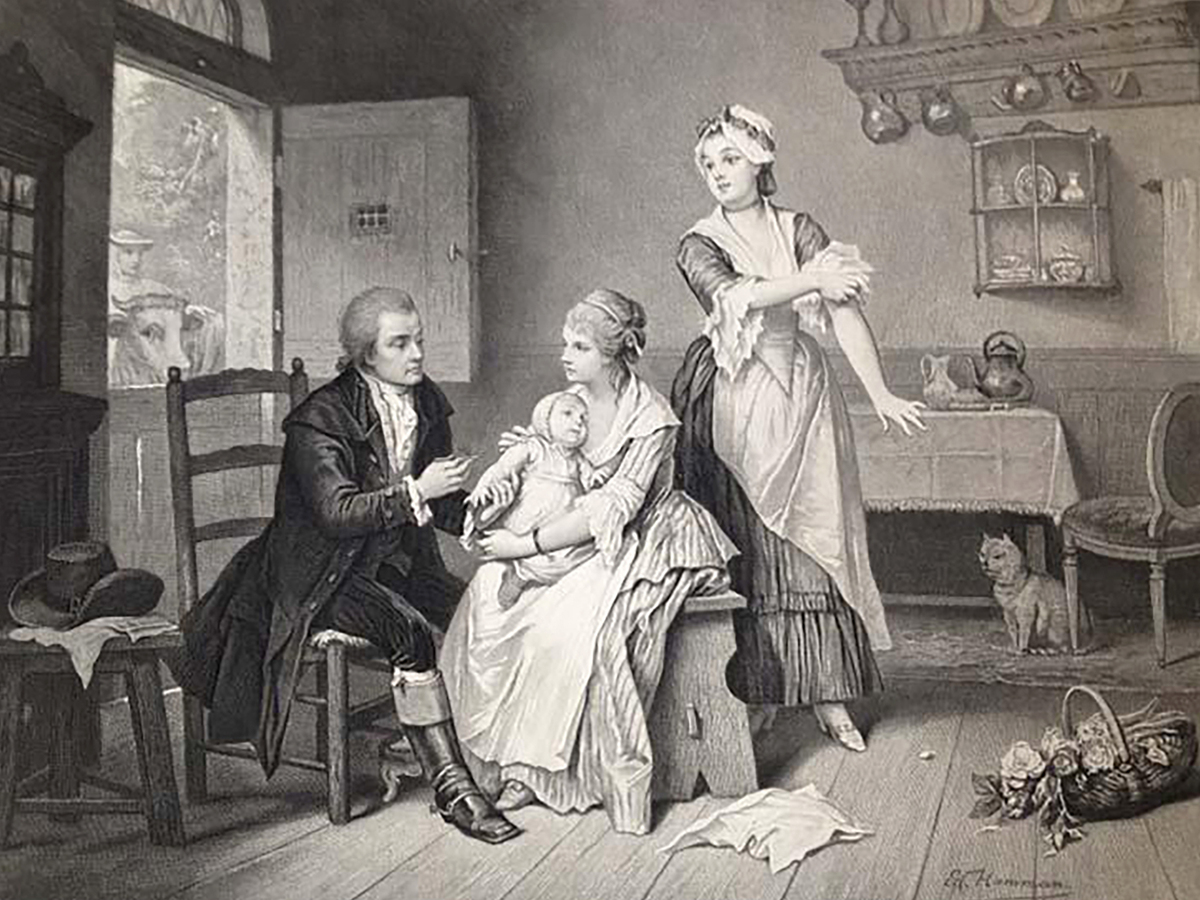 As history tells it, young Edward Jenner heard a milkmaid brag that having cowpox made her immune to smallpox. And years later, as a doctor, he drew matter from a cowpox pustule on the arm of a milkmaid to vaccinate a young test subject (depicted in the drawing above). A researcher now weighs in on the veracity of the milkmaid stories.

Once upon a time, a long time ago, there was a beautiful milkmaid. Her face was flawless, her complexion peaches and cream, her smile confident as she bragged, "I shall never have smallpox for I have had cowpox. I shall never have an ugly pockmarked face."

A 13-year-old orphan boy heard the milkmaid's boastful declaration of immunity — or so the story goes. The boy was Edward Jenner, an apprentice to a country surgeon. Jenner's name would one day be famous for developing the world's first vaccine, which would eventually rid the earth of the scourge of smallpox. And the story of his boyhood inspiration for developing the vaccine is a classic of medical history, told in an 1837 biography and repeated endlessly over the years.

Jenner grew up to become a doctor in Berkeley, Gloucestershire, in England. In 1796, he vaccinated a child named James Phipps with pus taken from a cowpox pustule, according to a historical report in 2005 in the journal Baylor University Medical Proceedings. He was testing a theory, supposedly brewing in his mind since the milkmaid's comment, that exposure to the relatively mild disease of cowpox would protect people from the far deadlier disease of smallpox. And it worked. The Phipps boy proved immune when exposed to smallpox after vaccination with cowpox, as did several other children Jenner experimented on, including his 11-month-old son.

Monkeypox On The Rise: How Worried Should We Be?

Jenner's work went down in history as the first scientific attempt to control an infectious disease through vaccination. Nearly two centuries later, on May 8, 1980, the World Health Organization announced that the world was free of smallpox.

But now, Dr. Arthur Boylston has blown the lid off the milkmaid story in a commentary in the latest edition of the New England Journal of Medicine: "The Myth of the Milkmaid."

"I'm expecting fire and brimstone," chuckles Boylston, professor emeritus of pathology at the University of Leeds and a senior teaching fellow at Oxford University. "Everybody loves the milkmaid story."

"I guess you could say it's legendary, carried on from generation to generation," says Dr. Joel Breman, senior scientist emeritus at the Fogarty International Center of the National Institutes of Health. And Mary Fissell, professor at the Johns Hopkins University School of Medicine in the history of medicine department, agrees. "The milkmaid story is absolutely the standard narrative. I've probably repeated it myself in undergraduate lectures," she says.

The Trend: Inoculate Yourself

To understand what really happened, Boylston, whose research interest is the history of smallpox inoculation, explored letters, medical notes and research papers, going back to about 1720. He has self-published a book about it, Defying Providence: Smallpox and the Forgotten 18th Century Medical Revolution. At that time, he says, doctors were attempting to prevent smallpox through a process called variolation, in which oozing matter was taken directly from the smallpox sores of sick people and scratched onto the skin of healthy people "There are records of women inoculating their own children with smallpox," says Boylston. "People got a mild case of smallpox, but then they were immune."

They were immune, that is, if they survived. Using actual smallpox virus to induce the disease in healthy people was risky. If people naturally caught smallpox during an epidemic, the chance of dying from the disease was 1 in 5 or 6. When they got smallpox after being inoculated, they generally developed a mild form of the disease, and the risk of dying dropped to about 1 in 50, Boylston says. Whether they got the disease naturally or from deliberate inoculation with the smallpox virus, survivors were immune for the rest of their lives. Historical records show that many people were willing to take the risk by exposing themselves — even their children — to smallpox.

But then Jenner showed that people could become immune to smallpox by being vaccinated with cowpox. It was safer because cowpox rarely kills.

But was the milkmaid really Jenner's muse? Boylston thinks not.

Because there is another storyline, backed by letters, diaries and research notes that Boylston uncovered in the course of his research. It involves a country doctor named John Fewster, whose story unfolded in 1768, exactly the same time the young Jenner was supposedly listening to the milkmaid's speculation about her immunity. Like other medical practitioners of the time, Fewster inoculated people with smallpox virus, offering them bed, board and medical care in a large house he obtained for that purpose. They would stay until what was usually a mild case of the disease passed. He treated a group of farmers in Thornbury, not far from where the young Jenner was an apprentice. Some of the farmers whom Fewster had deliberately exposed to smallpox were already immune to the disease. Fewster could tell because they had no reaction to inoculation. "Typically, people would get a big sore on their arm and a very mild case of smallpox. If they already had had smallpox, they wouldn't respond," says Boylston.

But there was something unusual about these farmers who were inoculated but didn't get the typical sore: They insisted they had never had smallpox. Then, according to a letter Fewster wrote, one farmer said, "I have had the cowpox lately to a violent degree, if that's any odds." Fewster inquired further. He found that all the farmers who were not responding to the smallpox inoculation never had smallpox but did previously have cowpox. His conclusion: They were immune to smallpox from exposure to cowpox.

Fewster's inquiry was a sound clinical observation that today would have led to a larger study and publication of results; but that wasn't the way medicine worked in the 18th century. "In those days, there were no medical journals," says Boylston. "Doctors communicated by having little dinner parties and drinking themselves silly." Those meetings, says Fissell, are an important part of the smallpox story. "Myths can encapsulate a beautiful story," she says. "But an important part of the smallpox story was that medical people were starting to get together to communicate in ways they hadn't before."

One such meeting of what then were considered informal medical societies took place at an inn called The Ship, Boylston found. He also found that two men, the Ludlow brothers, were at the meeting; and Edward Jenner, though not at the meeting, was apprenticed to the Ludlow brothers in 1768. At the meeting, Fewster presented his story of the farmers who never had smallpox but did have cowpox. Boylston believes that the brothers went home and told their young apprentice of Fewster's observations.

Jenner was only 13 when he almost certainly heard of Fewster's observation. He eventually became a member of the medical society that met at The Ship, and records show he became known as "the cowpox bore" for his obsession with the topic in the members' debates. He had nearly 30 years to ponder cowpox and smallpox before testing his theory in 1796 by vaccinating young James Phipps.

"The idea that cowpox could prevent smallpox infection came from Fewster's observations in 1768," says Boylston. "There was no milkmaid."

Who Made The Myth?

So how did the milkmaid myth get started? At the time, the first and only mention of the milkmaid story was by Jenner's friend and first biographer, John Baron, several years after Jenner's death. According to Boylston's research, other doctors were then criticizing Jenner, questioning how he ever made the connection between cowpox and smallpox immunity. Jenner himself never explained how he developed the theory that led to his 1796 experiment. "After Jenner died, his biographer was trying to protect Jenner's reputation," says Boylston. John Baron probably made up the milkmaid story as a way to show how Jenner had come across the idea of a cowpox/smallpox connection, Boylston says.

The true story is not as much fun as a folk tale about a beautiful milkmaid, says Boylston, but it represents good science. "What I like about it is that Fewster is a very ordinary country doctor. He was a clinical observer. He looked at his patients. He listened to them," says Boylston.

No doubt, people will miss the milkmaid myth. "But we should not lose the story entirely," says Breman. "After all, Jenner took the cowpox lesions from Sarah Nelms to vaccinate James Phipps. And Sarah was a milkmaid."