Accessibility links
How Much Would Ending Poverty Damage The Environment? : Goats and Soda A new study offers an intriguing way to calculate the answer.

If We Bring The Good Life To All, Will We Destroy The Planet?

If We Bring The Good Life To All, Will We Destroy The Planet? 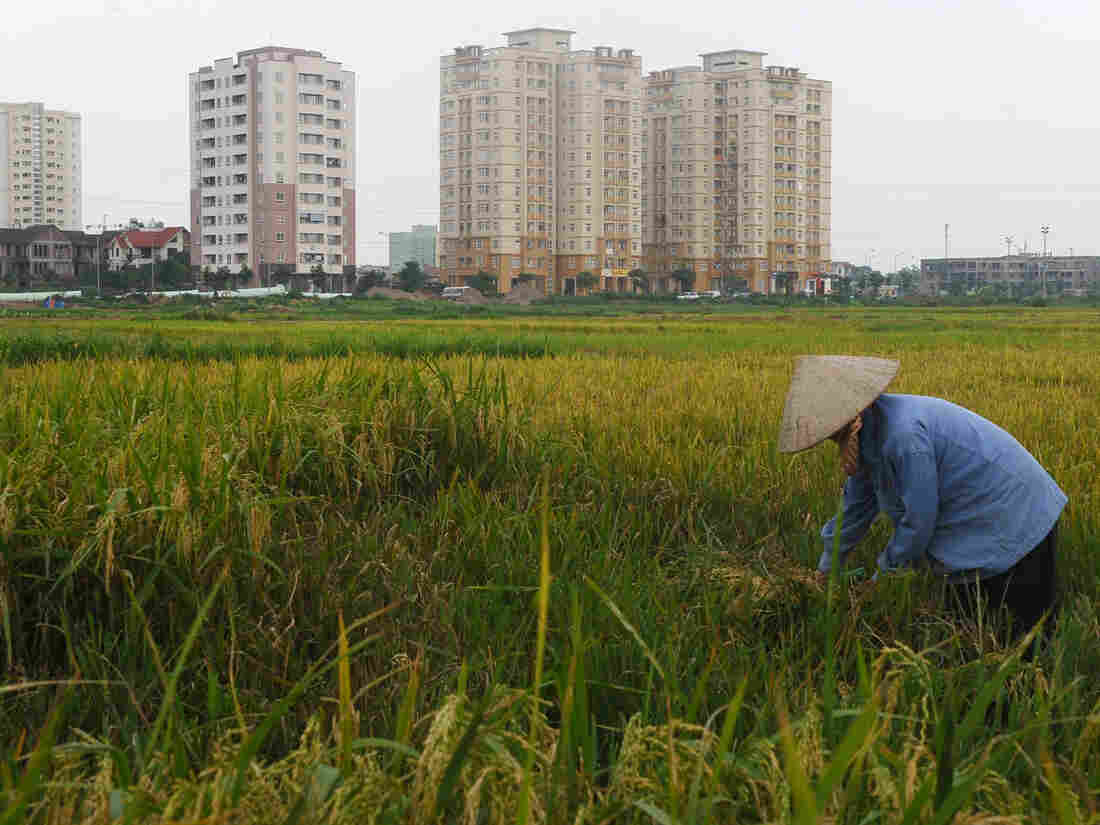 A paddy field sits on the outskirts of Hanoi, the capital of Vietnam, the only country that even comes close to delivering the good life in a sustainable way. Hoang Dinh Nam /AFP/Getty Images hide caption 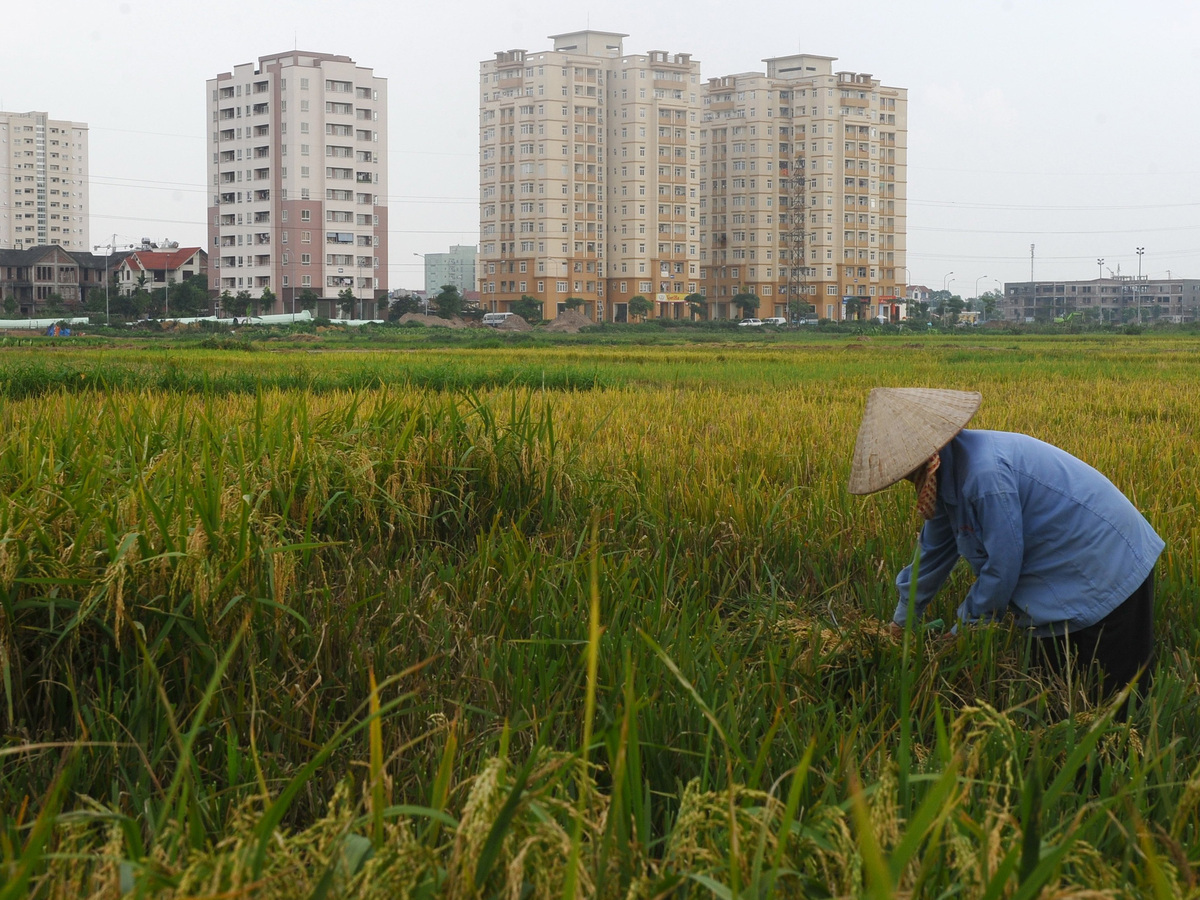 A paddy field sits on the outskirts of Hanoi, the capital of Vietnam, the only country that even comes close to delivering the good life in a sustainable way.

Our blog often features stories about efforts to improve life for this planet's 7 billion inhabitants: how to make sure everyone has access to clean water and power, medical care to stay healthy, enough income to feed their kids, education for the children so they can fulfill their potential.

But a new study in the journal Nature Sustainability poses a question not often considered: If we were to succeed in providing all this, what would be the cost to the environment?

In other words, can our planet actually sustain the good life for all?

As we improve the human condition — building sanitation facilities and expanding farming to provide more food, for example — we necessarily damage the environment. We cut down trees, we put fertilizers in the soil that kill off aquatic life, we pump carbon dioxide into the atmosphere.

So to figure out whether we can meet everyone's basic needs without destroying the planet, we need to know: For each bit of progress on the human front, how much harm is done on the environmental side?

Daniel O'Neill — an economist at the University of Leeds in the United Kingdom — and several collaborators came up with 11 indicators that a country has met the needs of its citizens. They range from boosting life expectancy above age 65 to ensuring that at least 95 percent of its adult population has graduated from high school, has access to sanitation and earns more than the extreme poverty line of $1.90 a day.

Then they looked at seven key ways in which humans damage the environment. For each of these, scientists have calculated what degree of damage would put the planet at risk. In the case of carbon emissions, for instance, the threshold is the total amount that humanity can emit before we will cause the planet to warm enough to trigger catastrophic weather changes.

From that, "we can calculate a carbon budget for the rest of the century," notes O'Neill. And then dividing that by the number of people on the planet, "we can say, 'OK, this is the carbon budget per person.' "

Then they analyzed the data of 150 countries to determine how they scored on both the environmental and the social fronts.

The hope was to find at least a few examples of countries that were simultaneously delivering the good life to their citizens while staying within their per capita boundaries for environmental damage — in other words, using natural resources at a rate that would be sustainable even if every person on the planet matched it.

There are also five countries that do damage above all seven of the environmental boundaries even as they fail to achieve all 11 social indicators. This includes the United States, which misses the mark when it comes to income equality and employment.

Even though China is not one of those five, it is arguably in even worse shape. It exceeds its per capita limits on five of the seven environmental thresholds yet only delivers on three of the social measures.

What, Really, Does 'Sustainable' Mean?

Only one country comes even close to delivering the good life in a sustainable way: Vietnam succeeds on six social indicators — including a life expectancy above 65 years and providing sufficient nutrition — while staying within its limit on every environmental threshold except carbon emissions.

So where do we go from here?

What does this all mean for humanity?

"It's a worrying finding," says O'Neill. But he cautions against concluding that there is simply no way for everyone to enjoy a decent life without destroying the planet. After all, these findings are based on how we are doing things now, he says.

"We certainly hope it's possible to do things better — to achieve a high level of human well-being at a much lower level of resource use."

And he adds that this study actually points to one way to do that. Specifically, O'Neill and his fellow researchers ran statistical tests to determine for each environmental measure how much damage it takes to produce a corresponding improvement on each of the social well-being indicators.

"And what we find is that it follows a curve of diminishing returns — as you use more resources you get less social bang for your buck," says O'Neill. "So there's a turning point after which additional resource use contributes very little to social performance." Wealthy industrialized nations such as the United States, the United Kingdom and Canada have reached that point, says O'Neill. "As we increase our resource use, we get almost no increase in human well-being from that."

And this means for these countries the strategy of growing the economy — basically trying to create new wealth — to boost the well-being of their underprivileged citizens is ineffective. A much better approach, argues O'Neill, would be to focus on redistributing their existing wealth more equitably.

And if high-income countries were to adopt such an approach, says O'Neill, they could reduce their use of resources. And that, he says, would "free up the ecological space" for poor nations, where using resources still does make a big impact in improving people's lives.