Accessibility links
Did WHO Violate Basic Humanitarian Principles During The Battle For Mosul? : Goats and Soda What happens if warring parties aren't able or willing to treat civilian casualties? WHO's solution made some humanitarian groups uneasy. 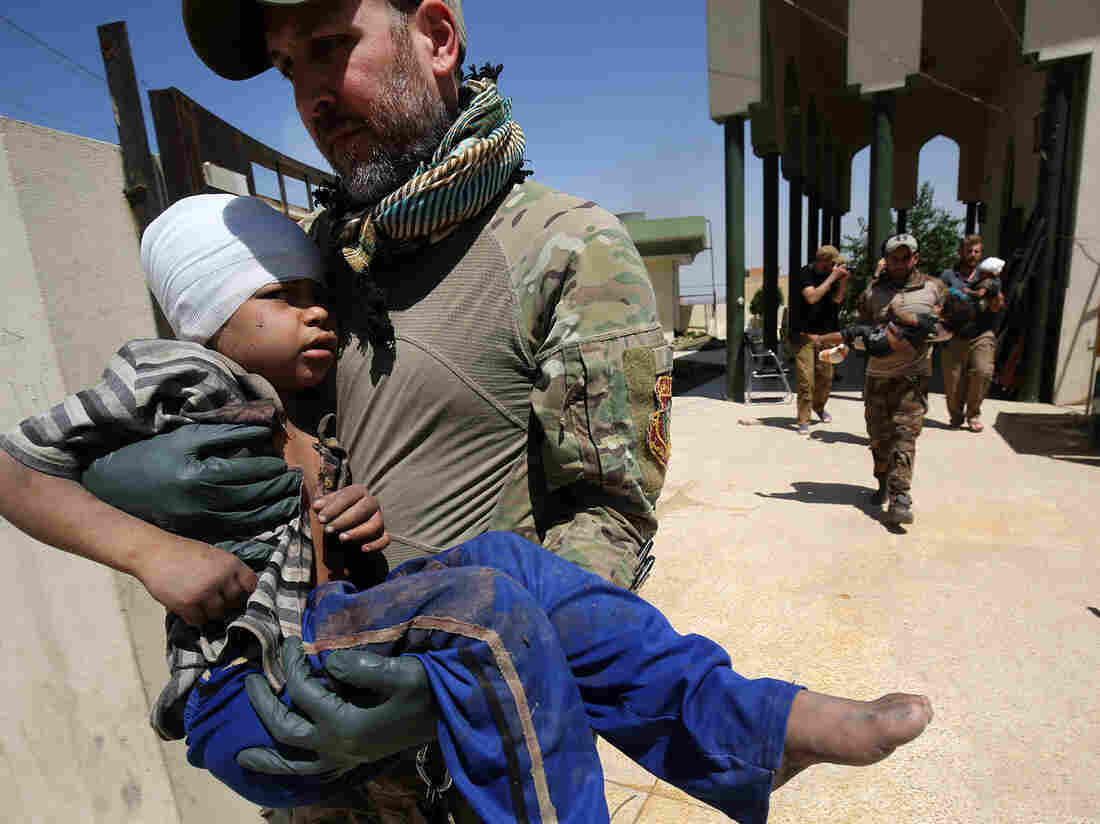 Medics from a U.S. group provided care for wounded civilians during the Iraqi government's offensive to retake the city of Mosul from ISIS. AHMAD AL-RUBAYE/AFP/Getty Images hide caption 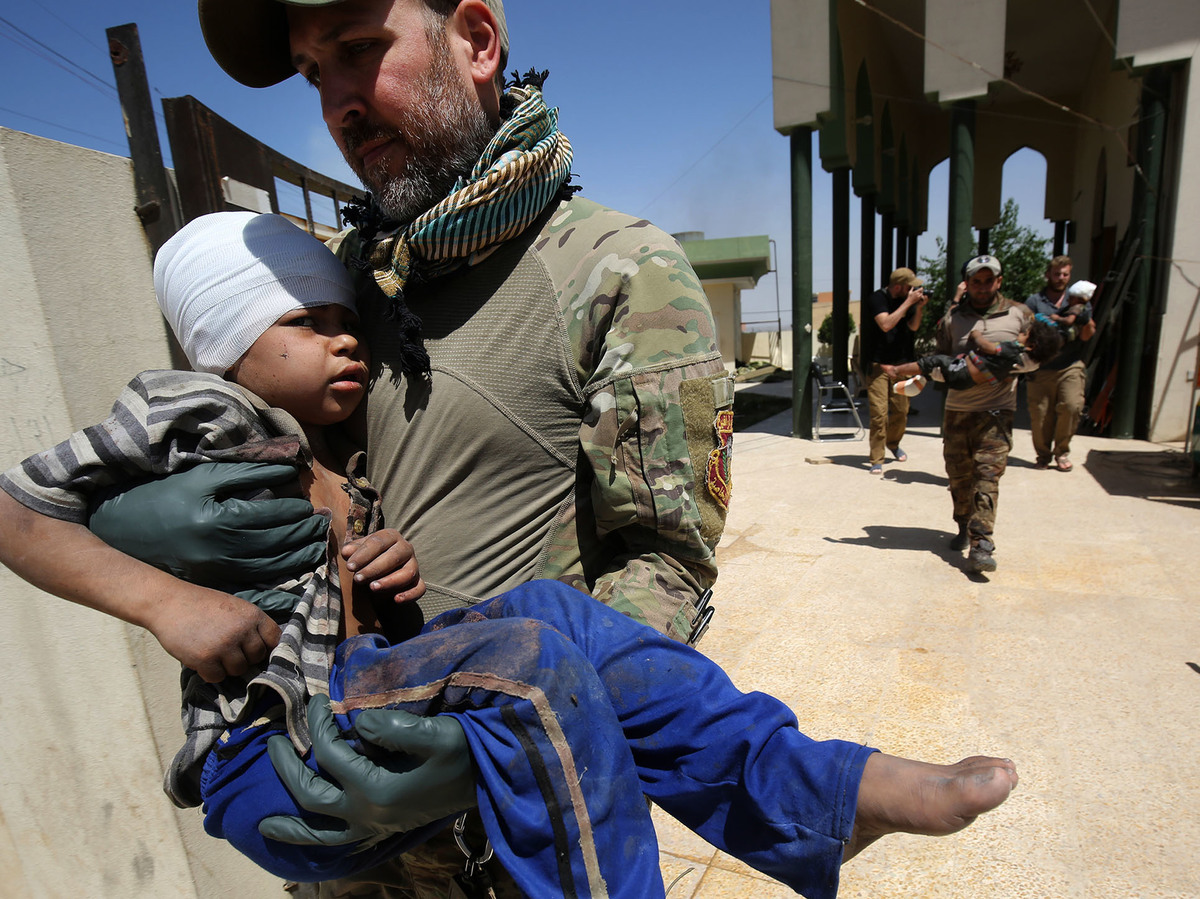 Medics from a U.S. group provided care for wounded civilians during the Iraqi government's offensive to retake the city of Mosul from ISIS.

Under the Geneva Conventions, warring parties are responsible for providing medical care to civilians in the territory they control.

But what happens if the warring parties don't have the will or the capacity to treat the civilian casualties? Or if they could not care less about the civilians?

That's a question that erupted in Iraq late in 2016, when the Iraqi military launched a massive military offensive to retake the city of Mosul from ISIS — the Islamic State of Iraq and the Levant. ISIS had seized control of Mosul two years earlier.

The battle to win it back would take months, cost thousands of lives and drive nearly a million people from their homes. The Iraqi Army was ready for the battle. The Iraqi Security Forces, backed by Kurdish fighters and an international coalition led by the U.S., had amassed nearly 100,000 troops for the attack. Aircraft, tanks and artillery were readied for the military operation.

But what the Iraqi Army lacked was a plan for how to provide medical care to civilians who were bound to be injured during the assault.

"Under the Geneva Conventions, this was clearly the responsibility of the Iraqi military," says Dr. Paul Spiegel, the director of the Center for Humanitarian Health at Johns Hopkins University. "But the Iraqi military just did not have the capacity to do it." The Iraqi Army barely had enough medics to tend to its own wounded soldiers.

The World Health Organization feared a massive humanitarian disaster. So they stepped in and tried to set up an emergency medical system to treat civilian casualties. One of the tenets of modern trauma care is that treating blast and gunshot wounds is most effective in the first "golden hour." WHO wanted to set up "trauma stabilization points" — in other words, battlefield clinics — as close as possible to the front lines.

On one side of the battle was ISIS, which already was not allowing U.N. or other Western humanitarian groups access to Mosul. So there was no way these clinics were going to be set up in ISIS territory. That's why WHO proposed embedding humanitarian health-care workers with the Iraqi military.

"It was very, very controversial," says Spiegel, who has just published a review of the humanitarian medical response to the battle for Mosul. He says WHO's plan raised serious questions about the neutrality and impartiality of humanitarian aid groups.

Aid groups fear that if they appear to be working for one side in a war that they become a legitimate target.

The International Committee of the Red Cross, which has run field hospitals in war zones for 150 years, balked at being so closely tied to the Iraqi Army. "Normally the ICRC sets up hospitals or what we call trauma stabilization points," Spiegel says. "But they've never done it so close to the front line that you had to have the direct protection of the military. That goes against traditional humanitarian principles of independence and neutrality. So they [ICRC] didn't do it."

WHO tried to convince Doctors Without Borders to "co-locate" in clinics with the Iraqi army medics but they also declined.

"For us we always try to be independent in the way we are working," says Christine Jamet, director of operations for Doctors Without Borders, speaking by phone from Geneva. Jamet says the battle for Mosul was very difficult for her organization because they had no contact or ability to work with ISIS. And they didn't want to be on the front line, where WHO was proposing they go.

With ICRC and Doctors Without Borders unwilling to set up trauma clinics on the front lines with the Iraqi troops, WHO's plan looked in danger of collapsing. "It really left WHO in a difficult position," says Spiegel.

WHO put out a wider call to nonprofits and managed to enlist the Christian aid agency Samaritan's Purse and a disaster relief group from New York called NYC Medics. "But they [WHO] still didn't have enough [medical staff]. So they turned for the first time to a private medical contractor to do this in the midst of conflict," Spiegel says.

WHO hired Aspen Medical, a private, for-profit Australian company, to staff these front-line health clinics. It was not Aspen's first experience with disaster relief. USAID had contracted with the group to deploy medical teams to West Africa during the Ebola outbreak in 2014.

So it was an odd mix of a medical team the WHO assembled: private Western doctors earning contractor salaries working alongside enlisted Iraqi medics, Christian volunteers and EMTs from New York, all of them under the protection of heavily armed Iraqi troops.

Kathy Bequary, acting director of Global Programs for NYC Medics, bristles at the use of the term "embedded" and says her volunteers were "co-located" with the Iraqi forces. Reached in Irbil, Iraq, Bequary explains that at the front-line clinics the NYC Medics and the Iraqi Army medics would work in the same building, at times separately and at times together. As the Iraqi forces pushed deeper into Mosul, Bequary says they'd move the trauma clinic forward too.

"We were often within mortar range [of the front]," she says. "So we would operate in a building, in a hardened structure."

She says they operated out of seven different buildings as the offensive pushed toward West Mosul. Their health workers treated civilians and combatants. "Yeah, we treated everybody," she says.

And because they were so close to the front line, she says, they were under the protection of the Iraqi Security Forces.

"We co-located with the medical unit of the Iraqi forces," she says. "We were within that bubble of those forces. The security was provided to us. You know we were afforded a natural security. And then depending on our location and the proximity to the front there were at times more troops that were around us."

Last year, a former project coordinator for a Doctors Without Borders south of Mosul, Jonathan Whittall published an article in BMJ saying that most aid groups around Mosul had abandoned neutrality — a bedrock principals of humanitarian action — and become an extension of the U.S.-led military operation.

"Some TSP's [trauma stabilization points] are run by armed medical personnel, some of whom wear patches on their uniforms that say "Make Mosul Great Again" — a clear reference of allegiance to the U.S. military campaign," Whittall wrote.

As more and more military operations are staged against groups like ISIS rather than conventional armies, making it difficult or impossible to establish health-care points on both sides of the front lines, Spiegel believes that humanitarian groups may need to rethink how they operate. There needs to be more discussion about their role, he says — and of when saving lives trumps the long-standing humanitarian principles of neutrality, impartiality and independence.