Accessibility links
Ghanaians Are Extremely Enthusiastic About 'Black Panther' : Goats and Soda Action movies are as popular here as anywhere else. But this one has a special resonance. 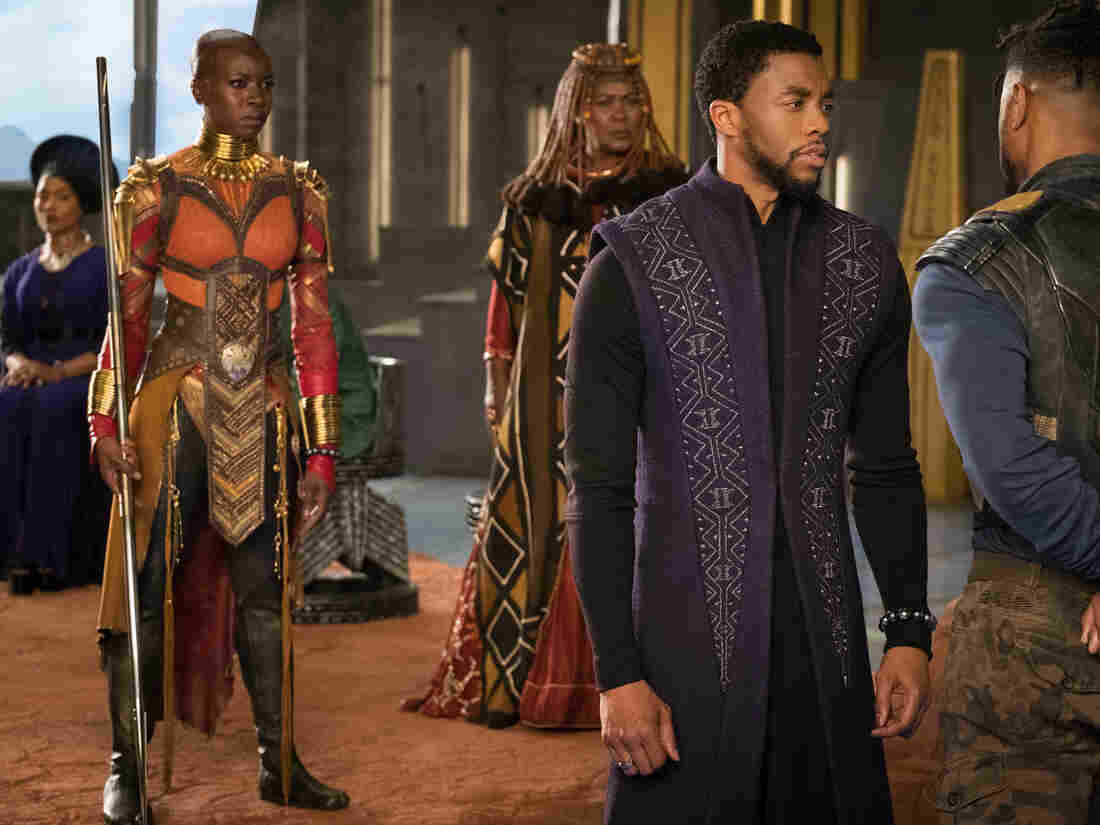 A scene from Black Panther. The titular hero, played by Chadwick Boseman, is on the right. Matt Kennedy/Marvel Studios/Getty Images hide caption 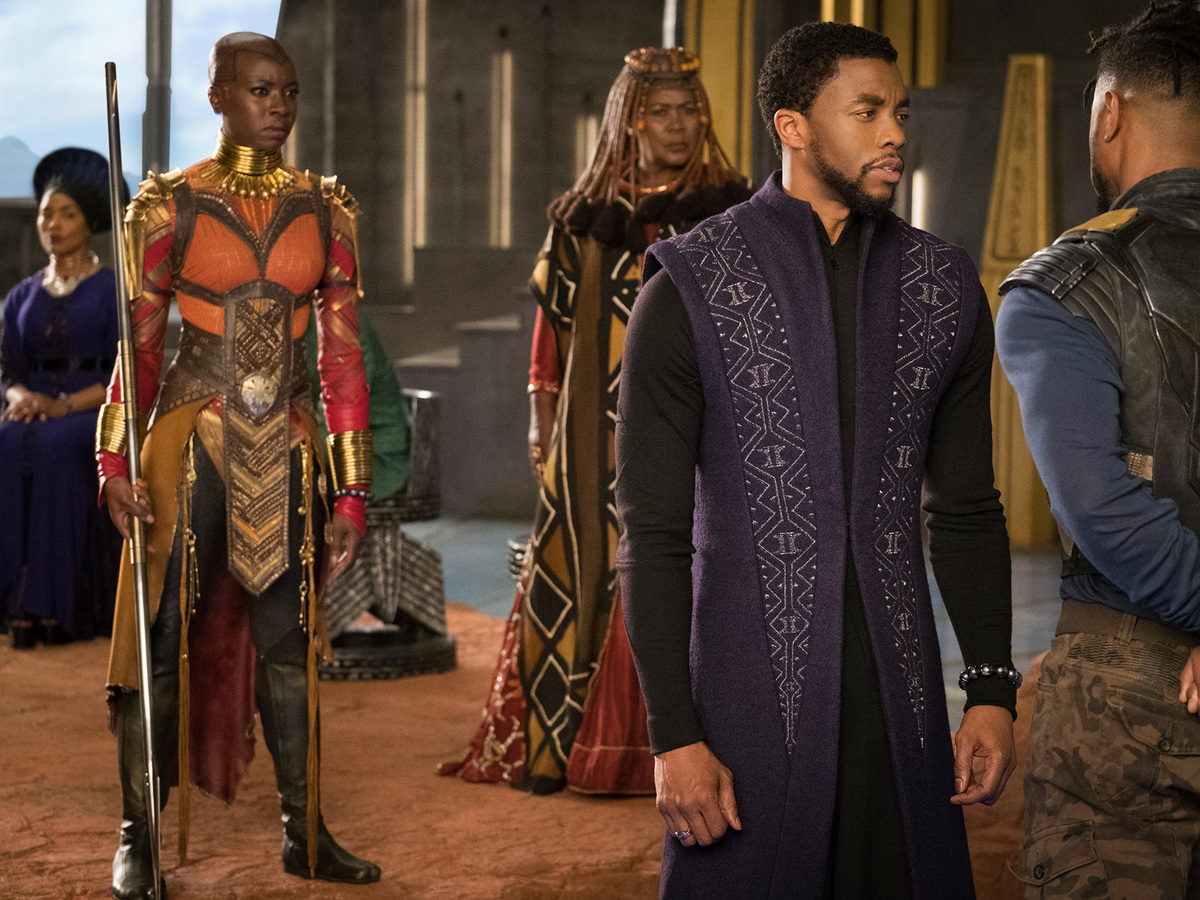 A scene from Black Panther. The titular hero, played by Chadwick Boseman, is on the right.

There was no red carpet, but there were drums, dancing, and general mayhem.

Ghana showed out for #blackpanther pic.twitter.com/n7413W1rEs

The premiere of Black Panther on Thursday night was definitely the wildest event in the history of the movie theater at the central mall in Accra, Ghana, says Joshua Nyamekye, who works as a ticket collector there. Before the night was over, fans trying to crowd into the theater left Nyamekye, 23, looking like he'd been roughed up by the titular clawed hero himself.

But Nyamekye doesn't resent his wounds; he was just as enthusiastic to see the movie himself.

"Marvel [Studios] movies are always crazy like this," he says. But this time, "we almost needed to call the police."

The movie, which builds off the popular "Avengers" superhero franchise, stars Chadwick Boseman as the butt-kicking King T'Challa of Wakanda, a mythical African nation that faces internal strife over whether to share its super-advanced technology with the outside world. Needless to say, the nearly all-black cast and African setting are a significant departure from typical Hollywood action-flick fare, and it has had a rapturous reception across the continent, starting with its global premiere in Kisumu, Kenya, co-star Lupita Nyong'o's hometown.

On the film's second night in Accra, the drums had died down, but the house was still packed, including a large contingent of self-avowed comic book nerds who say the movie held a special resonance for African audiences.

"There hasn't been a mainstream black hero, so we're really holding up this character," says Kofi Ofori-Amanfo, a 24-year-old software developer and lifelong Marvel fan who grew up following a Spiderman strip that occasionally appeared in the local newspaper. He was there with his friend David Kumi, who confessed to be more a fan of rival DC comics (Superman, Batman, etc.) but was willing to make an exception for Black Panther. The two had eagerly awaited this premiere since catching a short appearance of Black Panther in last year's Captain America: Civil War.

"I'm really glad about the way everyone is embracing it," Ofori-Amanfo said. "I believe in one way or another it could help people see Africa in a different light."

The audience in Accra was boisterous and found plenty of moments to cheer. Particular audience favorites included a mention of Ghanaian traditional masks in a scene set in a museum gallery, and a joke about vegetarianism that comes at the expense of one of the movie's few white characters (a CIA agent played by Martin Freeman), which audience members took as a lighthearted jab at the ridiculous ways of obroni, the local Twi language word used to refer to foreigners or white people.

Less popular was the "African" accent affected by many of the characters, which several audience members here found forced, vague and unconvincing, with heavily articulated consonants and a grab-bag of speech patterns from Nigeria, South Africa, and the Swahili-speaking countries of East Africa.

Apart from the accent issue, the movie's representation of pan-African culture was well-received. The movie's costume designer, Ruth Carter, told NPR that her team pulled color, geometry and other design elements from a variety of African cultures into the distinctive vision of "Afrofuturism" on display in Wakanda. It's a difficult balance to strike: How to show off the continent's cultural diversity without mashing things together so much that the movie plays into the Africa-is-a-country stereotypes that frequently afflict mainstream Western representations of the continent. Here, flying vehicles whiz past a vendor hawking woven baskets, and King T'Challa's space-age black robes are trimmed in kente, a brightly colored traditional Ghanaian textile.

"African culture is represented very well," Ofori-Amanfo says. "They integrated the whole African touch in a way that was intriguing and exciting."

Beyond the design, audience members pointed to other elements that seemed familiar here (don't worry, no spoilers ahead). Wakanda struggles with the simultaneous blessing and curse of highly valuable natural resources, which has been the root of many African nations' troubles from colonialism to modern-day corruption and conflict. Despite a strong nationalist tradition, Wakandans are prone to be torn apart from within by tribalism, a familiar crisis across the continent, including in Ghana, which has recently experienced an uptick in violent clashes between cattle herders of the Fulani ethnic minority and farmers of other groups.

Characters in Wakanda have a significant debate about how to relate with the global African diaspora, which as the Washington Post's Karen Attiah notes, mirrors a similarly complex real-life relationship between Africans and black Americans about why they haven't been more mutually supportive on issues from colonial occupation to police brutality.

And although Wakanda is ultimately a patriarchal society, it relies on powerful women, like Nyong'o's warrior princess Nakia and Letitia Wright's saucy engineer Shuri, who are valued for their brains and brawn as much as for their beauty.

Ultimately, the movie's representation of Africa is one of resilience, progressivism, compromise, fierce dignity and cooperation.

"They are portraying the African sense of being there for each other," Ofori-Amanfo says. "They're showing that Africans as a whole can stand up."

But as Amartey Amarteifio, 25, puts it, Ghanaians don't need Hollywood to tell them that.

"I already know how amazing Africa is," he said. "I'm just happy that America will get to see this side."