Accessibility links
Donald Trump Jr. Is Impressed By The 'Smile On A Face' Of India's Poor. : Goats and Soda He may have thought he was paying the poor a compliment. India's poor, however, do not always have reason to smile.

Donald Trump Jr. Is Impressed By The 'Smile On A Face' Of India's Poor

Donald Trump Jr. Is Impressed By The 'Smile On A Face' Of India's Poor 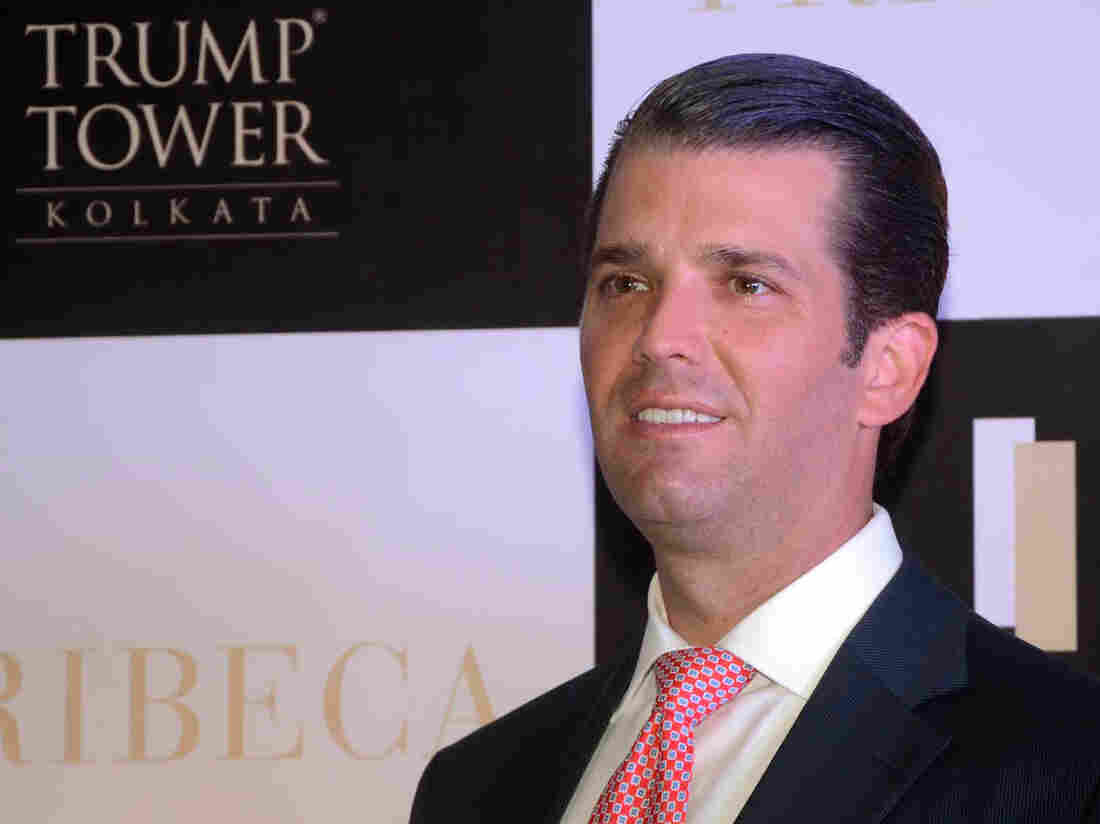 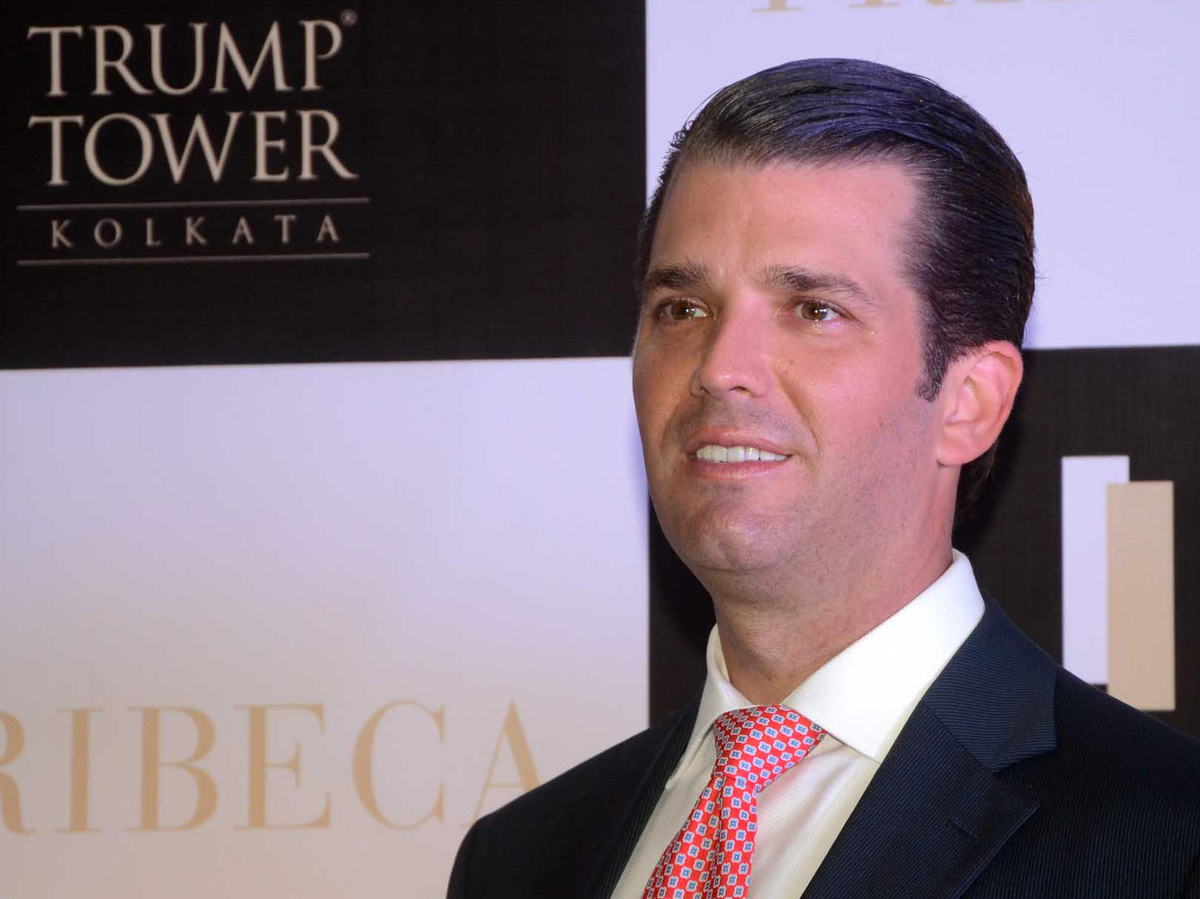 Donald Trump Jr. at a photo session after visiting Trump Tower Kolkata, a Trump Organization apartment building in India. Its website says it is "synonymous with celebrated luxury."

Donald Trump Jr. says he was impressed by the poor people of India.

During a visit to promote his family's luxury apartments, Trump Jr. had this to say in a television interview with the Indian channel CNBC-TV 18.

"I think there is something about the spirit of the Indian people that is unique here to other parts of the emerging world. You go through a town ... and, I don't want to be glib but you can see the poorest of the poor and there is still a smile on a face. ... I know some of the most successful people in the world and some of them are the most miserable people in the world."

"You go through a town.... you can see the poorest of the poor and there's still a smile on their face."

Donald Trump Jr. arrives in India on a week-long visit to help attract buyers for his family's luxury apartments. pic.twitter.com/wPHyBQpwi7

India does have a great number of poor people (even though the Indian economy is booming and expected to overtake China's as the fastest-growing economy in the world).

According to the World Bank, 1 in 5 of India's 1.36 billion people is poor. That's a total of 270 million people. And 80 percent of them live in rural areas, far from the glitzy capital city of New Delhi where Trump Jr. is hawking his apartments.

People who work to help India's poor were not smiling at Trump Jr.'s remark.

Trump Jr. may have thought he was paying the poor a compliment, says Dr. Luis Dias, a physician and founder of Child's Play India, a charity that teaches classical music to underprivileged children in Goa. But, Dias says, "it's condescending and makes a sweeping statement about a demographic he has never really seen or spent time with, either in India or the rest of the world."

"A statement like this is very misleading, because it implies that poverty is a desirable state of being, that the poor are grateful and content. But anyone who has seen poverty will tell you that it's anything but glamorous. It can be intensely frustrating," says Senthil Babu, a social worker in Puducherry, South India.

For the past 15 years, Babu has been working to better employment prospects for daily wage laborers across India. "One of the biggest myths about poverty is that education can help you rise out of it," he says. The reality, he says, is that many of India's young people are educated, but the lack of opportunities in villages and rural hamlets keeps them unemployed and poor.

"It's not so easy to smile when everything you've worked so hard for comes crumbling down around you, when after every effort you've made, doors are still tightly shut," says Babu.

The reality of poverty

And what is it like to be poor in India?

For Arokia Jhelum, 62, a former construction worker in Madurai, poverty means intense vulnerability and a complete lack of choice.

"I never felt like smiling when I was poor," she says.

In 2007, Jhelum was working at a construction site. She was paid the equivalent of 60 cents for every 1,000 bricks she laid. In an accident in June that year, a wall of bricks came crashing over her. She developed blood clots and an injury to her kidney, which had to be removed.

Like many of India's daily wage earners, she had no private health insurance. This meant that she had to rely on the public health care system, waiting to be seen by doctors. "I spent 10 days in excruciating pain, watching people dying all around me," she says. Her family borrowed $618 from a money lender to fund her surgery privately.

"After my surgery, I was determined to get back on my feet, clear my debt and put away some money," she says. "To be poor is to be frighteningly vulnerable. I never wanted to be that poor again." Today, she works as a maid, and with her adult children earning too, the family is better off, she says.

For S. Mari, 42, who works in several homes in Madurai doing laundry and the dishes, being poor made her feel she had to marry off her 19-year-old daughter. "She wanted to continue her studies, but I couldn't afford to send her to college. It's not safe for a single woman where I live. She needs the protection, physically and financially from her spouse," she says. "My heart aches to think of it, but it's our reality."

A loss of control

Many people don't understand that the most debilitating effect of poverty can be to completely erase one's identity, says Chennai-based Aruna Rathnam, a former education specialist with UNICEF (she retired in December). "If you live in poverty, you're seldom respected for your skills or the technical, cultural or linguistic expertise you may have. It's as though your knowledge accounts for nothing," she says. This erasure starts in childhood and, she says, can explain why low self-esteem is often an issue when someone battles poverty.

"And even if you have resources, sometimes you aren't empowered enough to use them," she says. For instance, she says, a mother may know that she needs to vaccinate her child, but as a daily wage earner, she may not have the opportunity to take off work to do so.

"While it might ease our conscience to think that poor people can and do smile and are content with their lot, the truth is that when you're poor, whether you smile or not, other people are always in control," says Rathnam. "It makes me wonder, just how many poor people did Mr. Trump Jr. actually see?"