Accessibility links
Cataract Surgery Campaign Brings Sight To The Blind In Ethiopia : Goats and Soda Cataracts are the leading cause of blindness globally. But a quick surgery and a $4 plastic lens can restore sight. A group from Vermont is offering free surgery in Africa and Asia. 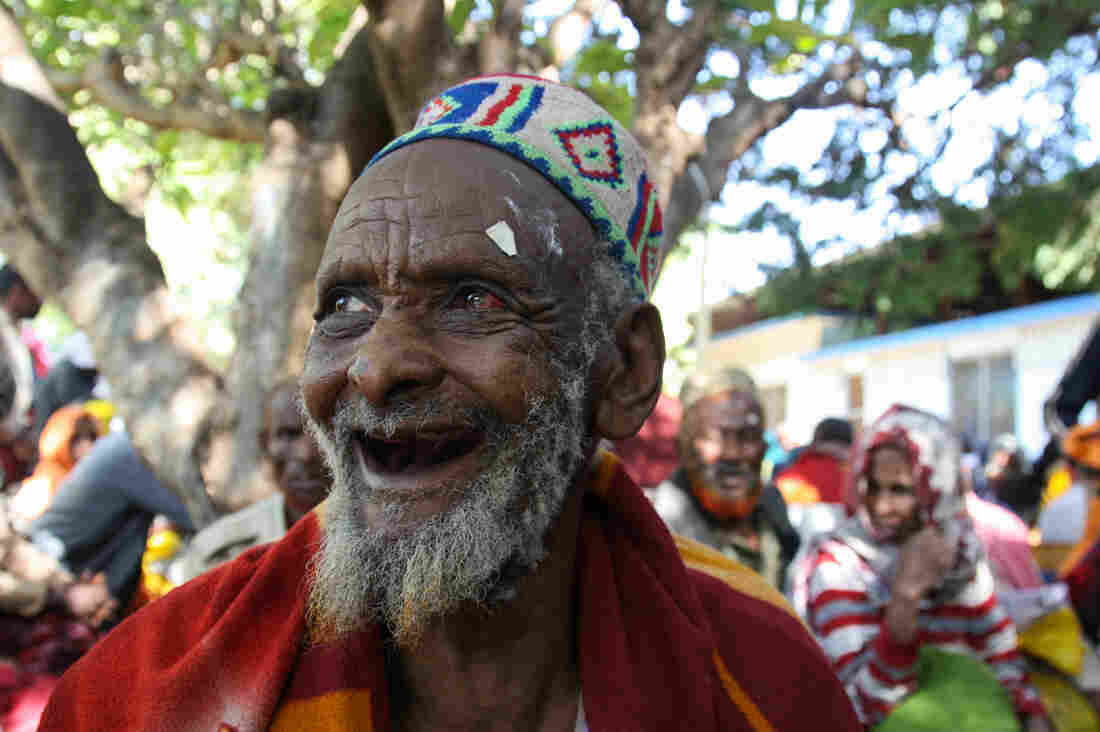 Ahmed Ali, the day after his cataract surgery. He has just had the bandages removed from his eyes and can see again. Ali, 75, was blind for 5 years. Jason Beaubien/NPR hide caption 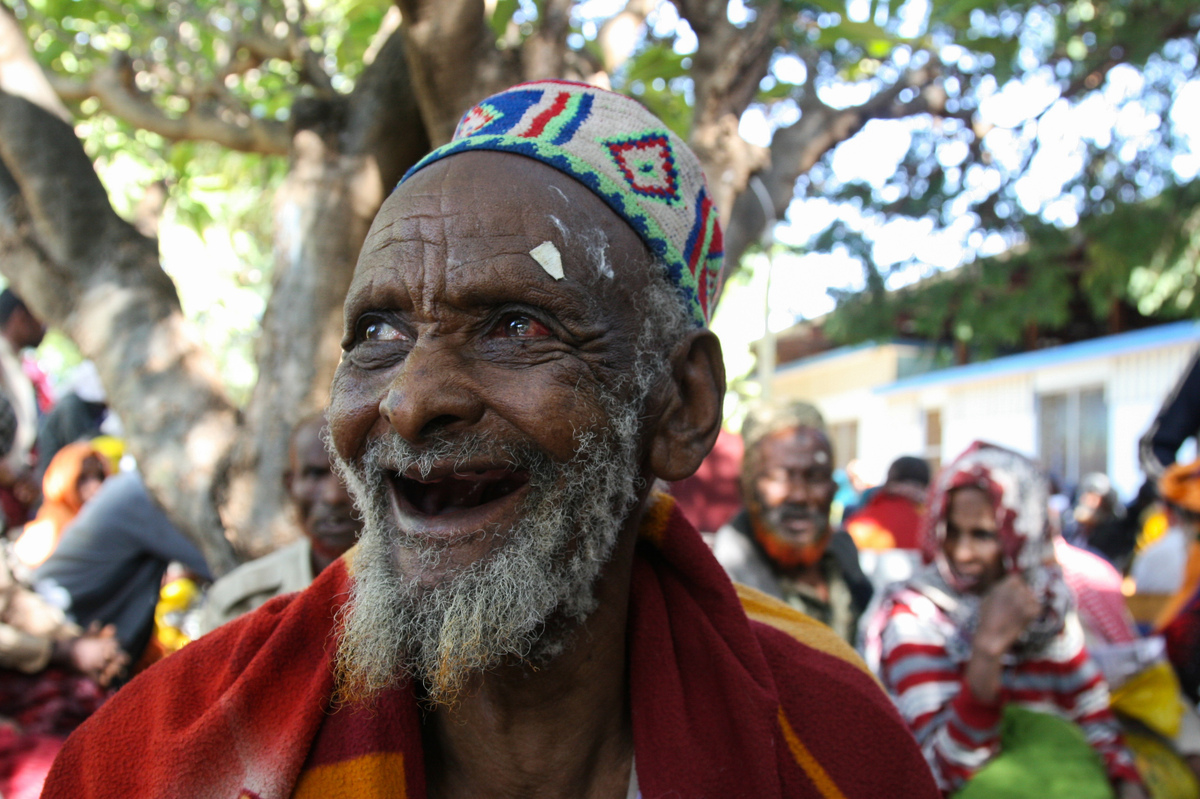 Ahmed Ali, the day after his cataract surgery. He has just had the bandages removed from his eyes and can see again. Ali, 75, was blind for 5 years.

The blind have descended in droves on the Bisidimo Hospital in Eastern Ethiopia.

The Himalayan Cataract Project is hosting a mass cataract surgery campaign at the medical compound that used to be a leper colony. For one week a team from the nonprofit has set up seven operating tables in four operating rooms and they're offering free cataract surgery to anyone who needs it.

Dr. Bitania Asfaw, a general practitioner at Bisidimo Hospital in Ethiopia, gives a tour of the waiting area for cataract patients.

On the first day of the campaign it's clear that the need is great.

"We have like 700 or 800 patients already in the compound and many more appointed for tomorrow and the day after and the day after that," says Teketel Mathiwos, the Ethiopian program coordinator for the Himalayan Cataract Project. 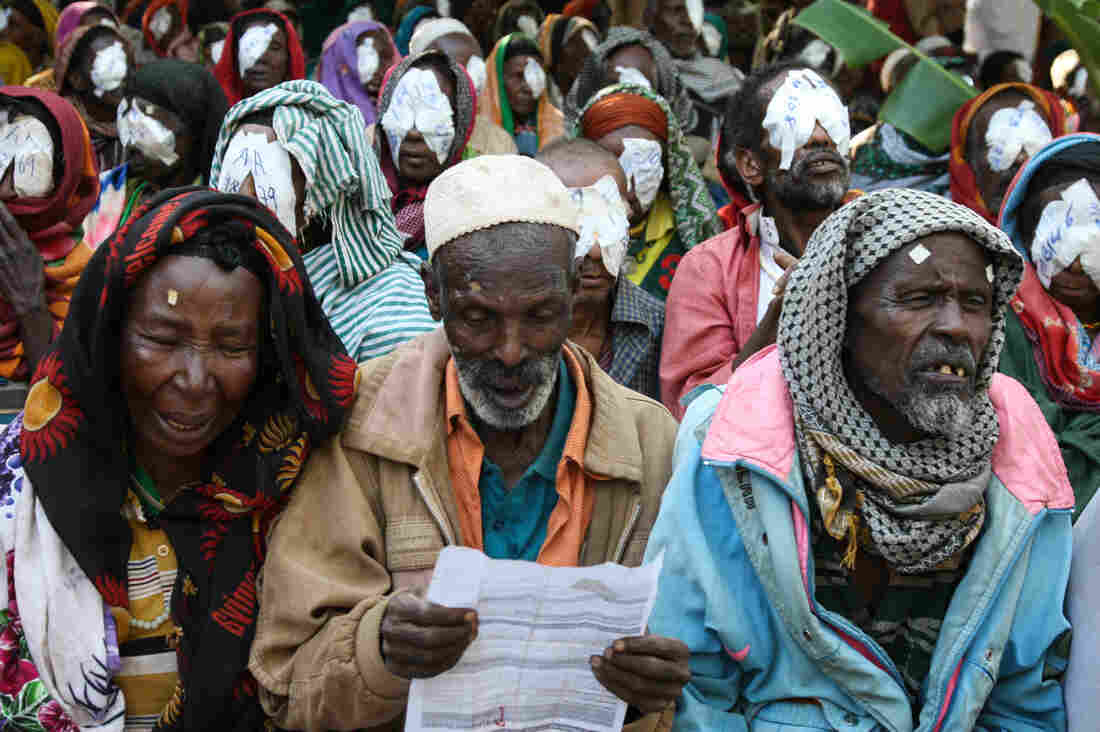 After cataract surgery to restore his sight, this man can now read his medical chart. Other patients behind him are about to have the bandages removed from their eyes. Jason Beaubien/NPR hide caption

People hoping to get their sight restored are jammed into the compound's main courtyard. Others spill out of an office where optometrists are prepping patients for surgery. The line to get into the actual operating theater extends all the way out of the building, up along a covered walkway and then loops around the corner of another medical building. More still are standing outside the hospital gates.

Mathiwos says some patients may have to wait a day or two for the procedure.

"They have tents here," Mathiwos says. "We give them the food to eat and we try to take care of them as best as we can."

Some of the patients at the Bisidimo Hospital have only one milky eye. Others are blind in both eyes. 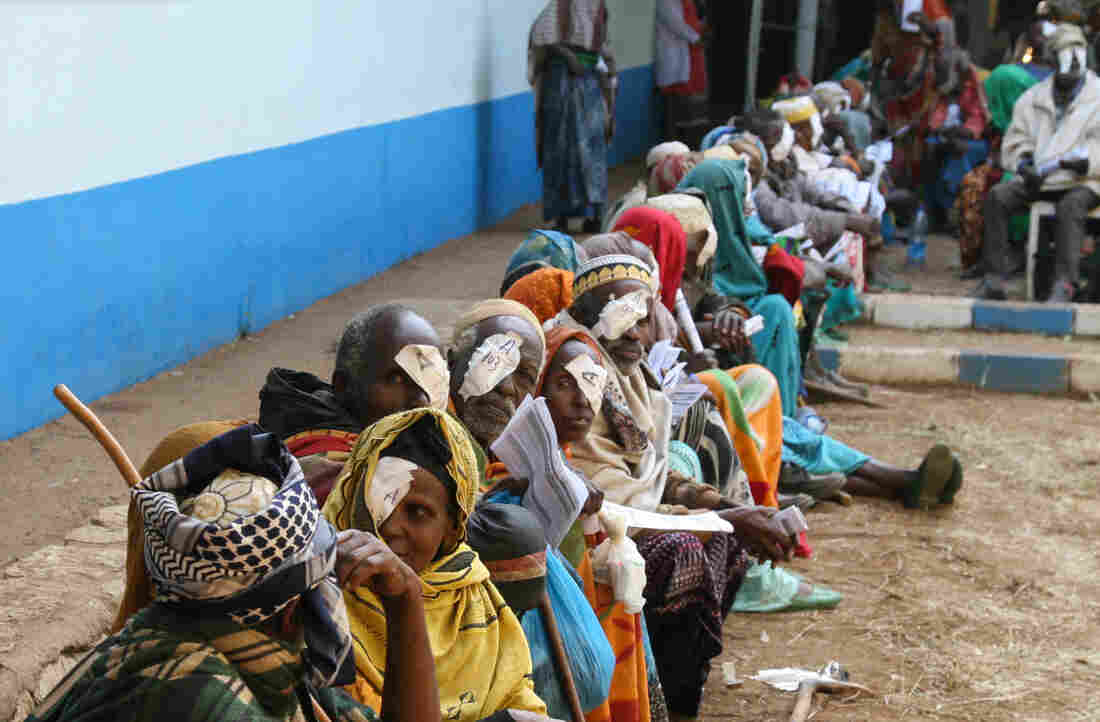 These patients underwent surgery as part of a campaign run by Himalayan Cataract Project at the Bisidimo Hospital in Ethiopia. The bandages are removed the day after the procedure. Surgeons performed more than 1,600 cataract surgeries during a six-day event in December. Jason Beaubien/NPR hide caption

A cataract is a condition where the natural lens in a person's eye grows opaque. There are various things that can cause cataracts including an injury to the eye or too much exposure to bright sunlight. Some research suggest vitamin deficiencies can be a factor. Cataracts usually develop slowly and are most common in people later in life. Surgery to repair cataracts consists of removing the damaged lens from a patient's eye and replacing it with a clear, plastic one.

Dr. Matt Oliva, an ophthalmologist from Oregon, is peering through a microscope as he makes a small incision in the top of the eye of a patient on the operating table in front of him.

A look at the operating room where cataract surgery is taking place.

"This is a gigantic one," Oliva says he tries to maneuver the gray cataract out of the slit he just made in the patient's eye. The cataract looks like an opaque contact lens as he plucks it out from behind the cornea. Oliva is decked out in the traditional green medical scrubs you'd expect to see in an operating room except he's wearing the bathroom flip-flops from his hotel. Ethiopian customs seized his suitcase at the airport, accusing him of carrying too much medical equipment. Eventually the officials released his luggage but not until after he'd had to improvise his outfit for a few days. 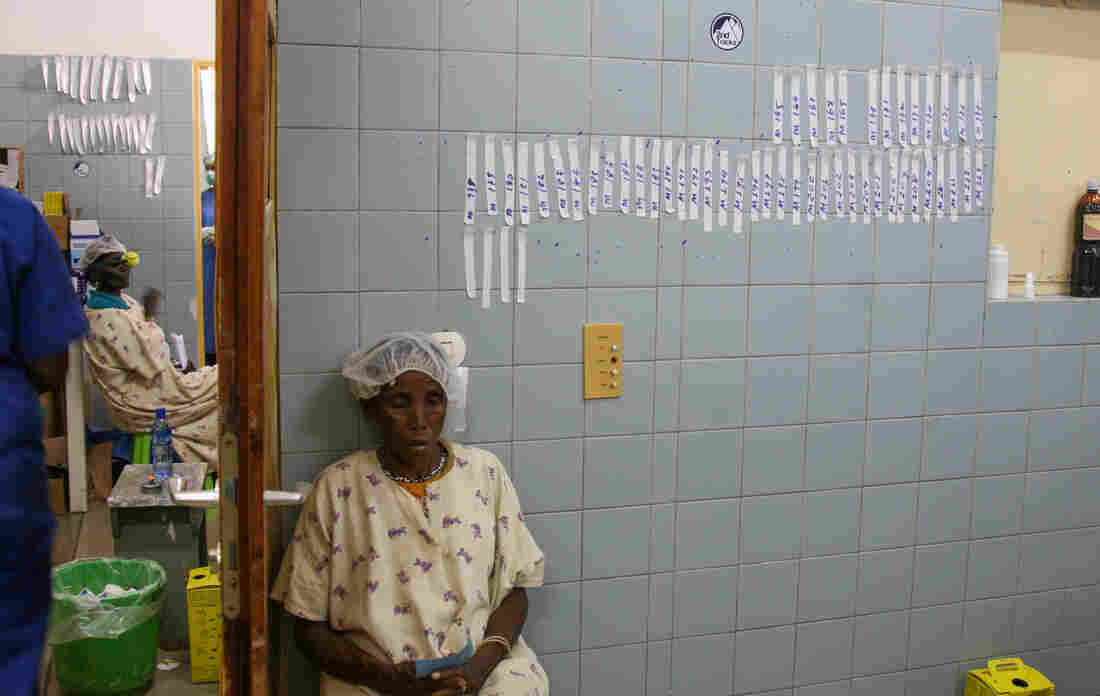 A patient awaiting cataract surgery at the Bisidimo Hospital sits by a wall with strips of tape. After surgery, the tape, with the initials of the doctor, is used to hold the patient's bandages in place. The number on the tape serves as a running tally of that doctor's surgeries for the day. Jason Beaubien/NPR hide caption 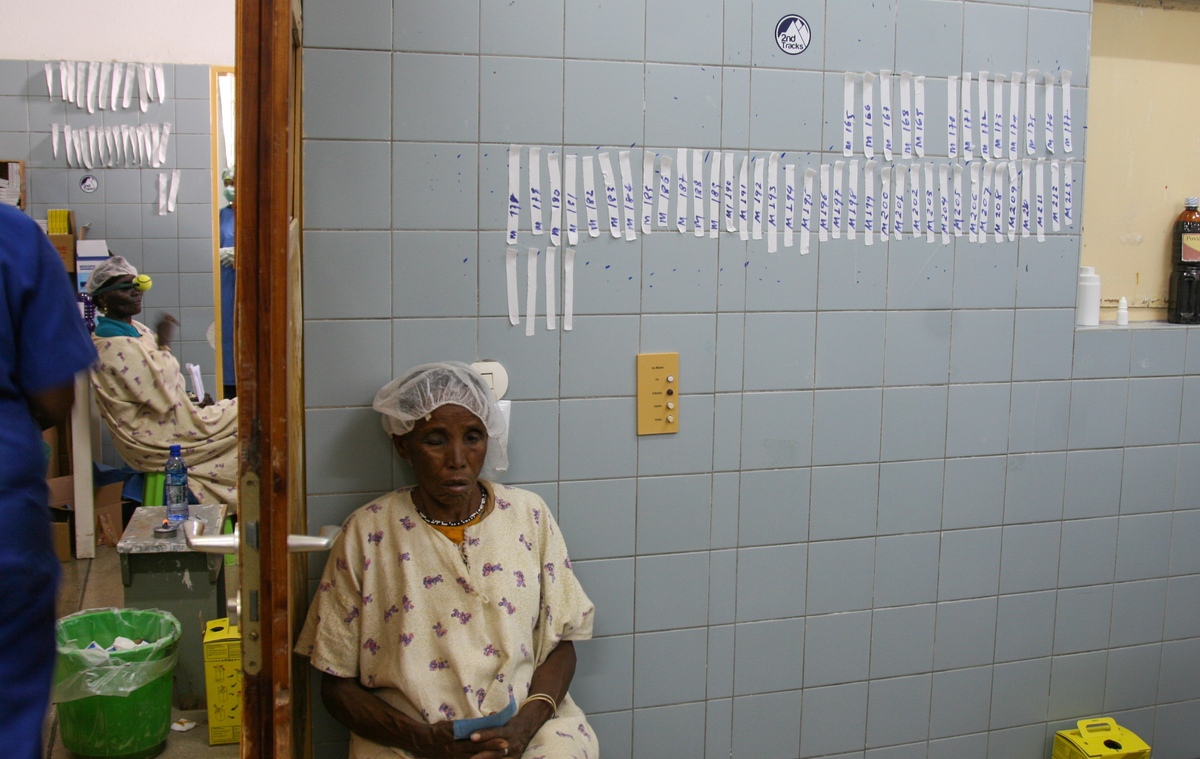 A patient awaiting cataract surgery at the Bisidimo Hospital sits by a wall with strips of tape. After surgery, the tape, with the initials of the doctor, is used to hold the patient's bandages in place. The number on the tape serves as a running tally of that doctor's surgeries for the day.

"The next thing is to put the new lens back into that exact same spot," he says as he slides a tiny plastic lens into the incision.

"This is a lens that costs $4. It's made out of a plastic material. It can't go cloudy. The cataract can't come back."

The entire operation takes four minutes. Some more complicated cases take longer. It can be harder to work on a person with an extremely deep eye socket. Also if the patient has suffered from trachoma or some other eye disease in the past, the cataract surgery might take up to 20 minutes. But even then this is a relatively quick procedure. 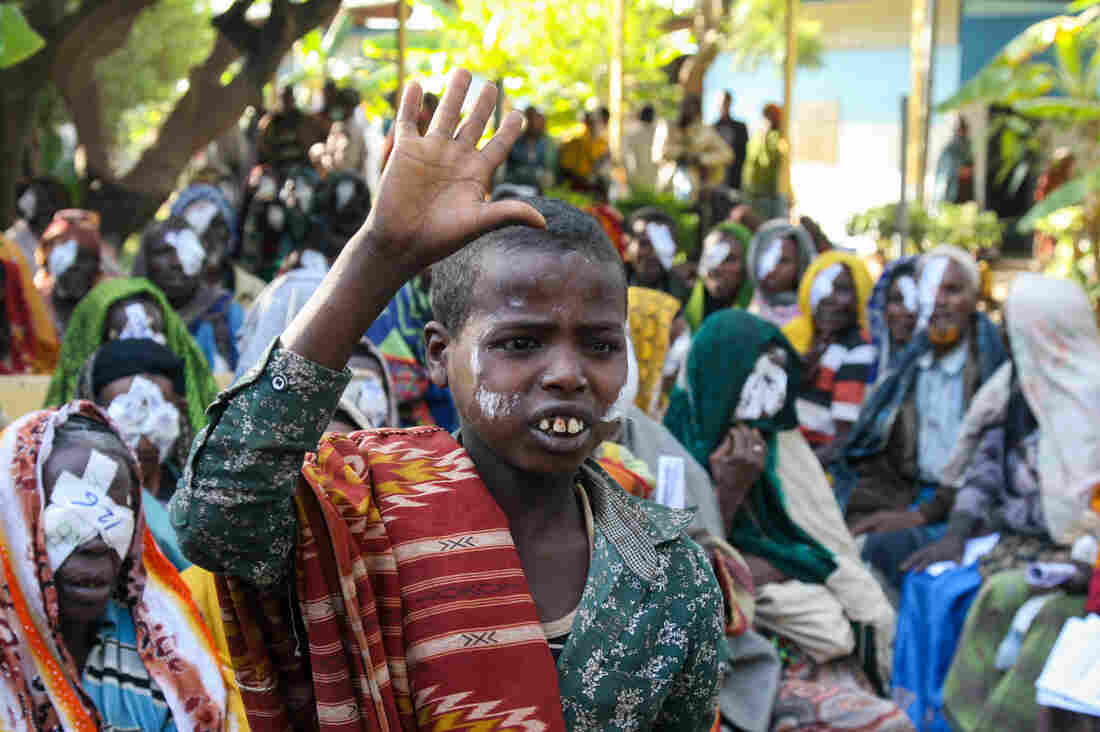 Mohamed Arab raises his hand to indicate that he can see after his cataract surgery. He was previously blind in both eyes. Arab, who gives his age as 15, was one of the younger patients. Now that he can see he says he hopes to be able to go to school and study. Jason Beaubien/NPR hide caption

"It doesn't really cost very much money," Oliva says, "and it's insane that there's so many people waiting around for cataract surgery, people that could have their sight restored by a simple and inexpensive operation."

Oliva has been a board member of the Himalayan Cataract Project for more than a decade. He regularly does mass surgical campaigns in Asia and parts of sub-Saharan Africa.

Three local surgeons are working in the adjacent rooms, and three residents are shadowing the team. Together they can remove and replace as many as 300 cataracts a day.

But Dr. Mulu Lisanekwork, an ophthalmologist from Addis Ababa who's working on the campaign, says the number of people with untreated cataracts in Africa is huge. Ethiopia has just over 100 eye doctors — roughly 1 for every million residents. Lisanekwork says all this untreated blindness contributes to poverty in her country.

"People stop being productive when they get cataracts. And productive people are less productive because they have to take care of their blind family members," Lisanekwork says.

Once the surgery is finished, the patient's eye is covered with a gauze bandage. A family member or another caregiver leads the patient to a shaded part of the hospital grounds to rest and sleep off the local anesthesia.

The next morning all the post-op patients gather on long benches in the courtyard of the hospital. Doctors and nurses move from one patient to the next, removing bandages and checking the eyes to make sure there isn't excessive bleeding or other complications.

As Dr. Oliva pulls off the gauze covering Alimi Hassen's eyes, the 80-year-old leaps from the bench as if startled by an apparition, startled that this operation really worked.

Hassen twirls around to take in the scene in the courtyard. As Oliva laughs, Hassen hugs the doctor. Hassen had been blind for 7 years. 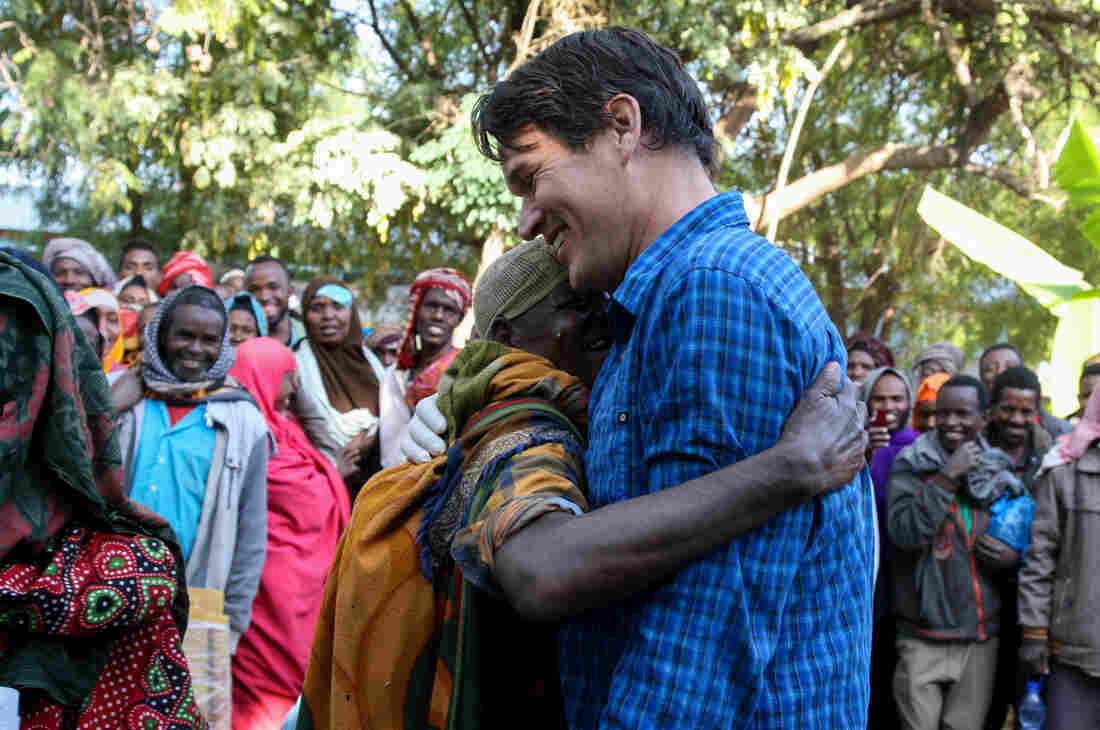 Alimi Hassen, 80, had been blind for 7 years. After his eyesight was restored, he hugs his surgeon, Dr. Matt Oliva from the Himalayan Cataract Project. Jason Beaubien/NPR hide caption

The women next to him, their eyes still covered, begin ululating.

As more and more bandages are peeled off, family members of the patients start singing and dancing in the courtyard. Several patients experiment with putting a hand over one eye, then the other, checking out their restored sight.

Oliva says the entire cost for this event — including paying staff, renting equipment, transporting patients back and forth to their villages — breaks down to just $75 per patient.

He calls cataract surgery the low-hanging fruit of international health. The Himalayan Cataract Project started working in Nepal in the 1990s and now hopes to tackle the leading cause of blindness in sub-Saharan Africa.

The HCP was a semi-finalist last year for the MacArthur Foundation's 100&Change competition, a search to find a group delivering bold solutions to one of the world'd most critical problems. (The $100 million prize went to Sesame Workshop and the International Rescue Committee to educate displaced kids in the Middle East.)

The World Health Organization estimates that more than 2 million people in Africa have lost their sight due to cataracts. 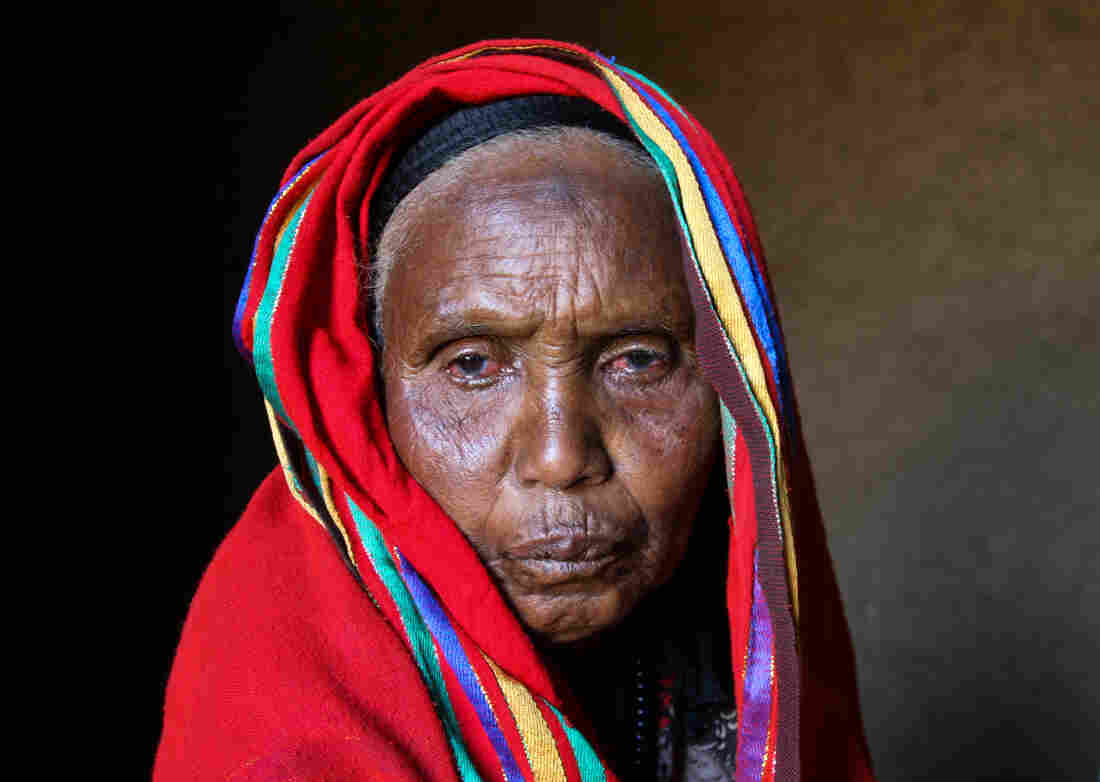 Amina Ahmed at home in Oromo, Ethiopia. Before having cataracts removed from both her eyes, she had been blind for four years. Jason Beaubien/NPR hide caption 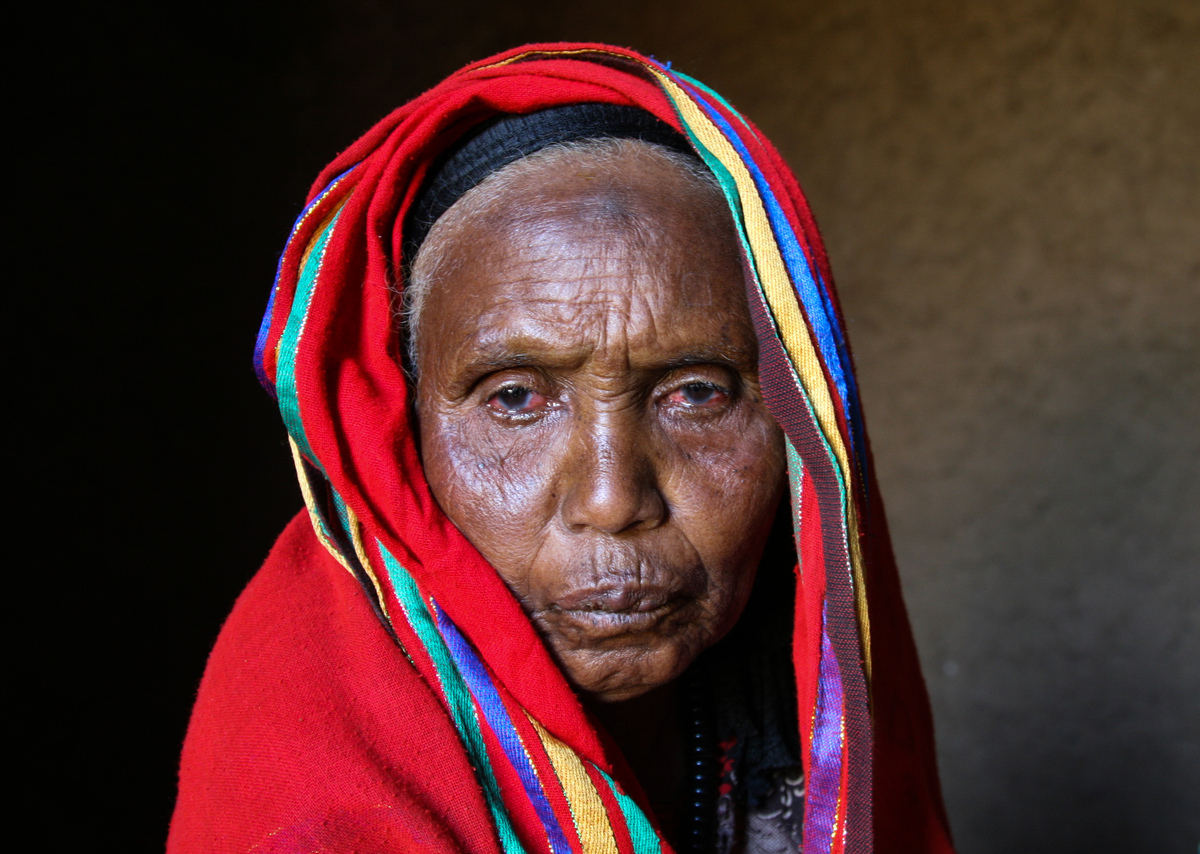 Amina Ahmed at home in Oromo, Ethiopia. Before having cataracts removed from both her eyes, she had been blind for four years.

Amina Ahmed was one of them. For her cataract surgery was transformational. The 60-year-old Ahmed had been totally blind for four years. She heard about the mass cataract surgery campaign on the radio and decided to go.

"When I went to the hospital I couldn't see and now I can see everything," Ahmed beams after returning home. "I'm very happy. I can see the faces of everybody."

She shares a one-room mud-walled structure with several generations of relatives. There's no electricity. The kitchen is out front around an open fire pit. The toilet is a wooden latrine at the opposite end of the family's small, dusty plot.

Her 2-year-old great-grandson, wearing a torn t-shirt and no pants, jumps into Ahmed's lap to welcome her home.

"Initially I could only hear his voice and I knew him through his voice," she says. "Now I can see his face."

Ahmed's grown children are overjoyed that she can see once again. Her daughter, Zeyneba, says it was very hard to take care of Ahmed in recent years.

"It was very difficult to take care of her," she says. "Even if we left her in the house she wouldn't be able to see who is coming and going."

Earlier at the hospital Dr. Oliva had mentioned that in Nepal blind people are at times called a "mouth with no hands" because they have to be fed but can't work.

Ahmed's niece, Asha Yussuf, says they had to watch Ahmed constantly and even keep the chickens away from her.

"The chickens come, they drink her tea, they steal her food," she says with a laugh.

But the simple cataract surgery has changed all that. So those thieving chickens need to look out.