Accessibility links
Growing Outbreak Of Lassa Fever In Nigeria Worries Public Health Officials : Goats and Soda The virus is spread primarily by rats during dry season. The current outbreak in Nigeria has public health officials worried — and eager to find out what's behind it.

No One's Quite Sure Why Lassa Fever Is On The Rise

No One's Quite Sure Why Lassa Fever Is On The Rise 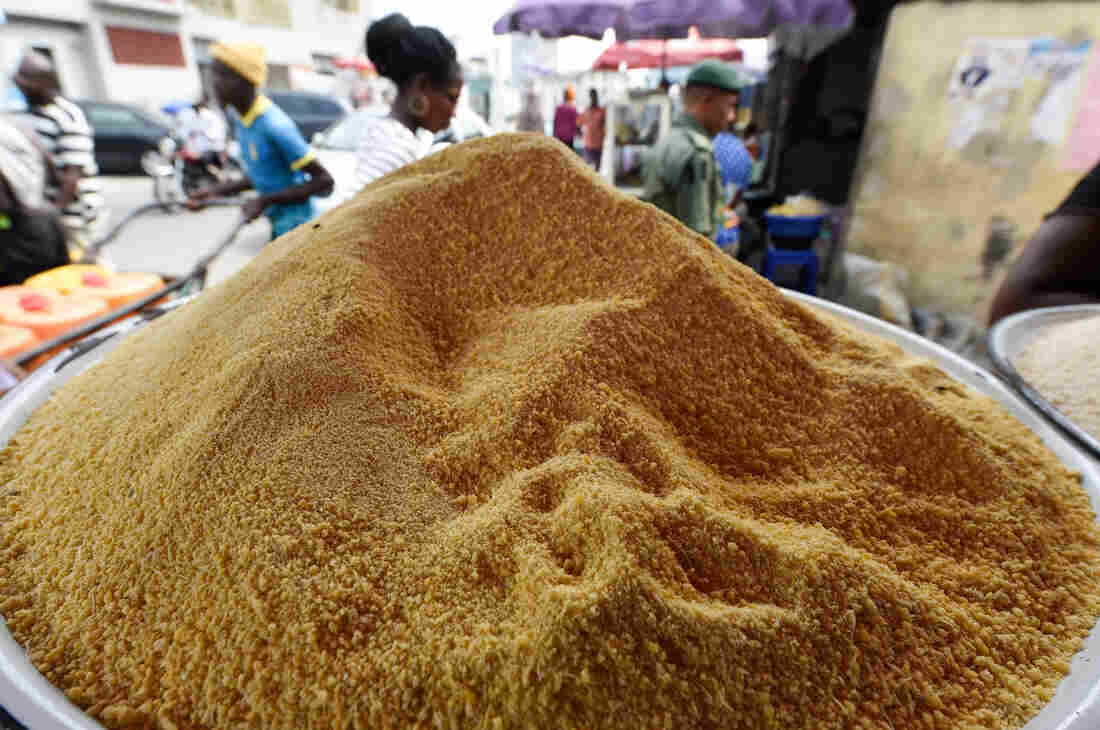 At a marketplace in Lagos, a tray of garri, a powdery foodstuff made from cassava that can be eaten or drunk. During dry season, rats scavenge for food and can spread Lassa fever by defecating or urinating in foods like garri. Pius Utomi Ekpei /AFP/Getty Images hide caption 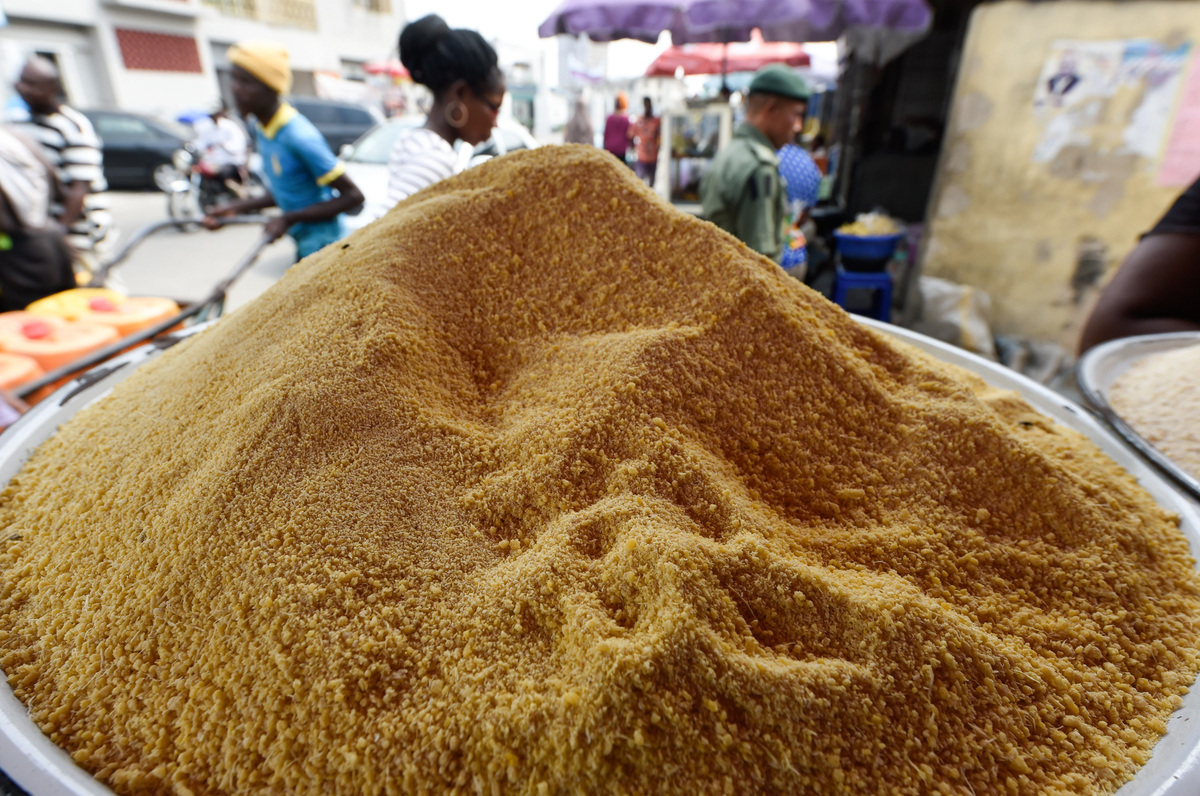 At a marketplace in Lagos, a tray of garri, a powdery foodstuff made from cassava that can be eaten or drunk. During dry season, rats scavenge for food and can spread Lassa fever by defecating or urinating in foods like garri.

Nigeria is tough on diseases.

With help from a few partners, it stopped Ebola's spread. It wrestled guinea-worm disease into a headlock, with no new cases since 2013. And it's nearly eradicated the transmission of polio.

But now a disease that usually just lurks in the background has roared into headlines. Since the beginning of the year, there's been a particularly large outbreak of Lassa fever in Nigeria's southern provinces.

"Everyone is scared," says Oyewale Tomori, a retired professor of virology who chairs the Lassa Fever Eradication Committee of Nigeria.

Lassa fever, named for the Nigerian town where it was discovered in 1969, generally breaks out during the dry season, between October and early March. It's not clear why this year's outbreak is bigger than usual.

So along with treating the mounting numbers of patients, Nigeria is trying to prevent the disease's spread. The NCDC is following up with 1,747 people who encountered patients ill with Lassa fever to try to diagnose cases early and prevent more infections.

The World Health Organization has also stepped in. "The high number of Lassa fever cases is concerning. We are observing an unusually high number of cases for this time of year," Dr. Wondimagegnehu Alemu, WHO representative to Nigeria, said in a statement. WHO has 20 people in Nigeria supporting NCDC, and they've shipped 40 boxes of face masks and goggles to hospitals to protect anyone in close contact with patients, says Tarik Jasarevic, a WHO spokesperson.

True to its name, Lassa fever starts out with a fever, along with a general feeling of weakness. Symptoms come on gradually and can include headache, sore throat, muscle and chest pain, vomiting, diarrhea, coughing and stomach pain.

The most severe cases can cause facial swelling, fluid in the lungs and bleeding from the mouth, nose, vagina or gastrointestinal tract.

Of patients who are hospitalized, 10 to 15 percent die from the virus. But many people contract the Lassa virus and develop antibodies against it without becoming ill.

The seasonal outbreaks reflect the source of the disease: It's a virus that jumps from the rat Mastomys natalensis to humans. West Africa's dry winters push rodents closer to people to scavenge for food. Virus-carrying rats may defecate or urinate in grains and other food; people can pick up the virus from contact with contaminated products. The virus can also spread between people via bodily fluids.

And there are a lot of rats – which means there's a lot of potential for outbreaks, says Lina Moses, a global health researcher at Tulane University. "If you compare this to the Ebola epidemic from 2014-2016, that likely came from one animal to spill over into the human population," Moses says. "So in terms of control [Lassa fever] is much more challenging."

Nigeria isn't the only country that's worried. The rats that spread Lassa fever are native to many regions of West Africa. Nigeria's news has pushed Ghana's Health Services to caution health-care providers about Lassa fever, but no cases have appeared there. On February 8, Guinea reported the first death from Lassa fever since 1996. The Guinean victim, who didn't appear to infect anyone else, died after traveling into Liberia – a reminder of how easily diseases can cross borders.

A general uptick in Lassa fever cases isn't totally surprising, Moses says. The Ebola epidemic led to improved labs and diagnostic testing across West Africa. Doctors use the same blood tests to identify Ebola as they do for Lassa fever.

But better diagnostics don't entirely explain the 2018 caseload. With about a month left in the dry season, reported cases have increased each week so far.

The faster diagnoses do, however, give health workers a chance to start the treatment that generally works against Lassa fever — IV infusions of the antiviral drug Ribavirin. That works best when administered within the first six days of the fever's onset.

To protect Nigerians, health officials are urging people to keep food in sealed containers so rats can't get to it and to keep garbage as far from homes as possible to keep rats away.

Moses is concerned that the rise in cases could be part of a trend. In a paper she published in 2016, she looked at the way the rat that carries Lassa fever interacts with humans. Examining data on climate change, population growth and land use, she suggests that the annual number of Lassa fever cases could potentially double by 2070.

In order to handle future outbreaks, it's important to investigate the causes of this current outbreak, she says. But there's a concern among public health officials that momentum will fade once the rainy season begins.

"When the rains come, the numbers go way down and people forget about it again," says the virology professor Oyewale Tomori.