Accessibility links
Asian Ticks Mysteriously Appeared On A New Jersey Sheep. How Worried Should We Be? : Goats and Soda No one is quite sure how that kind of tick got there. And get this: It basically clones itself! Should we be worried?

Asian Ticks (Mysteriously) Turned Up On A New Jersey Sheep

Asian Ticks (Mysteriously) Turned Up On A New Jersey Sheep 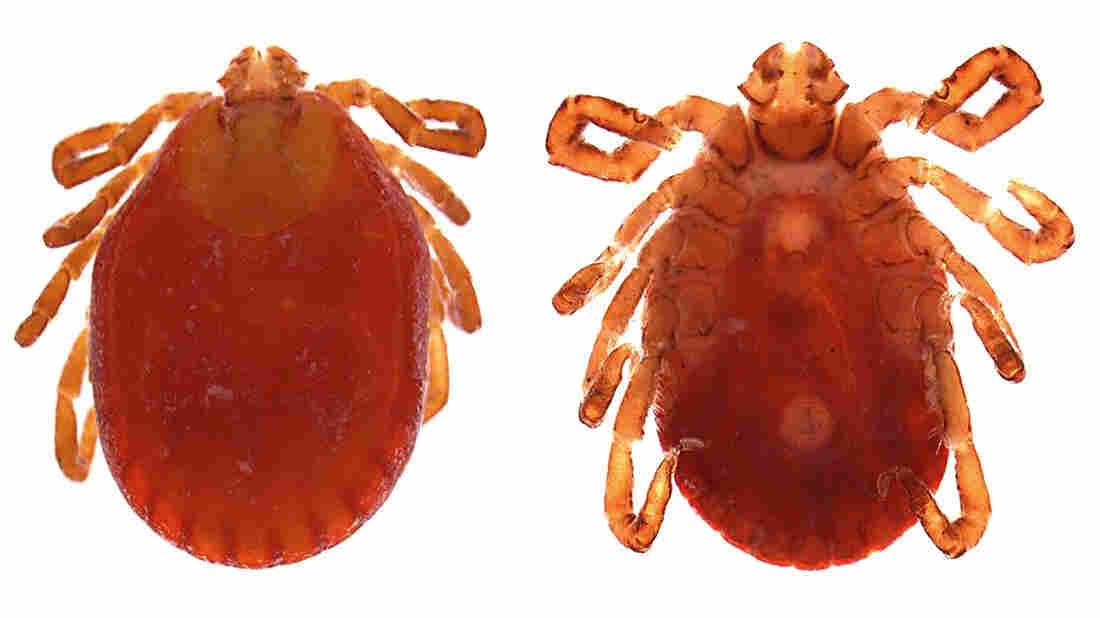 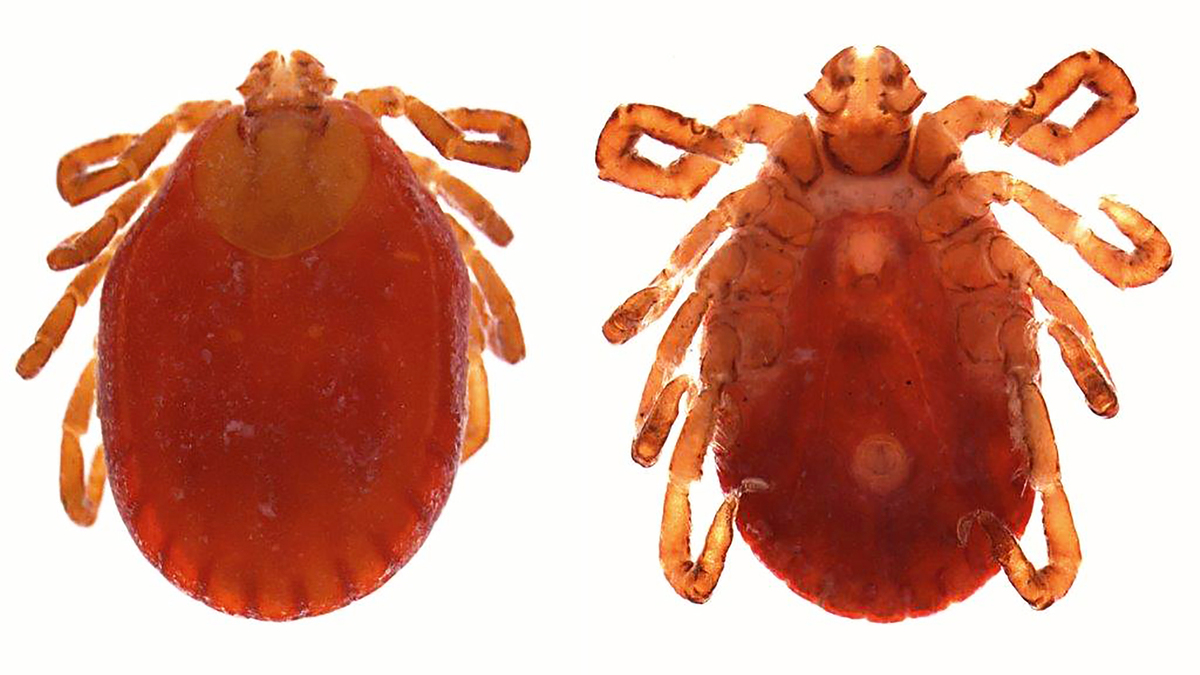 How did a tick that's native to East Asia make it to rural New Jersey?

That's the question puzzling researchers. The backstory involves a panicky sheep owner, tick-covered humans and a pair of pants stuck in the freezer.

The tick in question is Haemaphysalis longicornis — also known as the longhorned tick or bush tick.

It can reproduce by essentially cloning itself, allowing it to multiply quickly. It feeds on the blood of a variety of mammals, including people. In China, it has been linked to the spread of SFTS virus, described in a Centers for Disease Control and Prevention report as "an emerging hemorrhagic fever."

The tick story starts last August. A resident of Hunterdon County, N.J., went to a county office because she had been shearing her sheep and noticed she was getting ticks on her arms, explains Tadhgh Rainey, the report's lead author and the division head of the Hunterdon County division of health.

"What she didn't know was her entire clothing, pants and everything, they were covered in ticks," Rainey says. Those ticks were in the larval stage — smaller than 0.03 inches and tough to spot.

"Basically, they look like a speck of dirt," Rainey says. "And if you look really closely, you'll see those specks of dirt start to move a little bit."

"I get this call from my assistant and he said, 'We've got a resident here who showed up covered in ticks; she's panicking; now we're panicking and her pants are in our freezer,'" Rainey says. (Freezing, he explains, is one of the best ways to kill ticks.)

At first, Rainey assumed the parasites were deer ticks, a native species common in the area. But the sheer number of ticks on the resident's clothing — more than 1,000 — surprised him. Usually, finding 20 to 50 larval deer ticks in that situation would be "quite a bit," he says. What's more, under the microscope, they didn't look like deer ticks.

Rainey later went to the paddock where the sheep lived to collect ticks.

"Within two minutes, we're covered in ticks," he says. "Numbers I had never seen before — just sort of stunning." 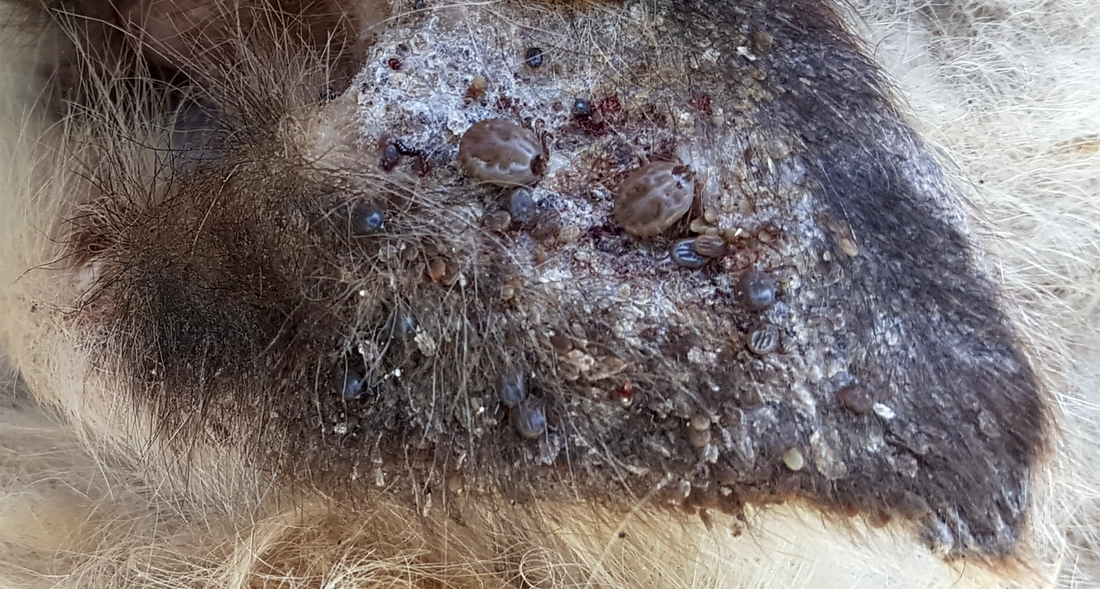 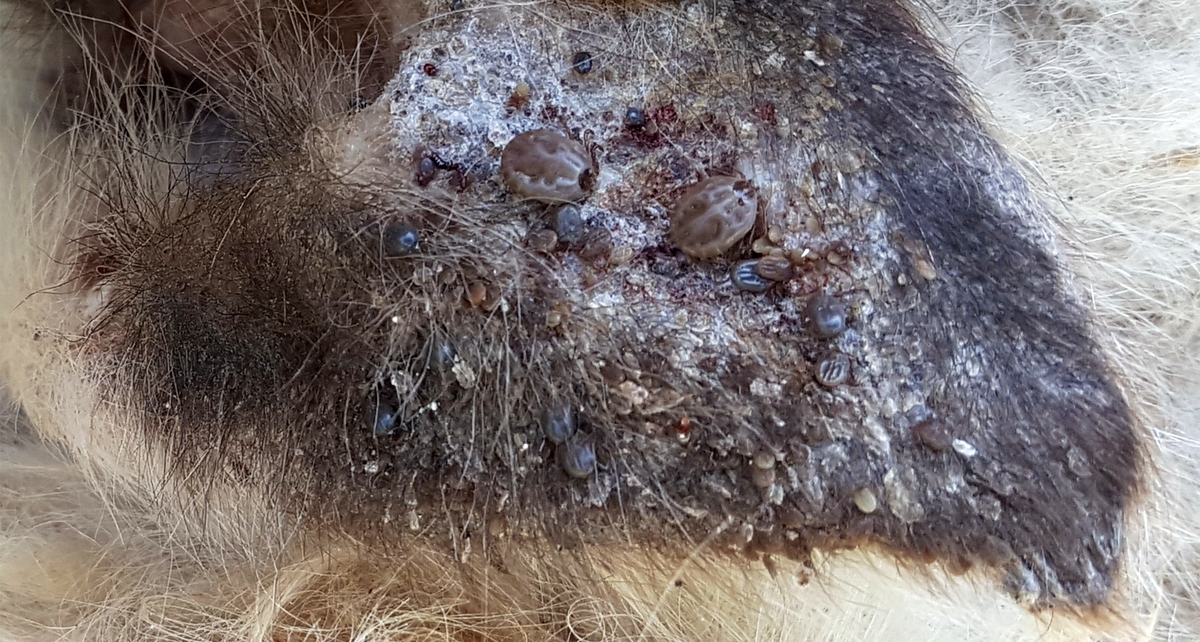 A close-up of the New Jersey sheep's ear, infested with an East Asian tick.

Investigators found hundreds on the sheep and collected nearly 1,000 more from the 1-acre paddock.

The tick has previously been found in the U.S. on large animals in quarantine, including a horse in New Jersey in the 1960s, says Andrea Egizi, the senior author of the paper, which was published last week in the Journal of Medical Entomology. Egizi is a research scientist with the Monmouth County Tick-Borne Disease Lab and a visiting professor in the entomology department at Rutgers University.

But this is the first time all life stages of this species (larvae, nymphs and adults) have been found on an unquarantined animal in the U.S.

Now here's the thing: This sheep had definitely not visited Asia. As the paper notes, it had no "travel history." So how did it pick up the ticks?

"There were no other domestic animals on that property, so it's a really big mystery exactly how it got there," says Egizi.

One or more ticks could have hitched a ride into the U.S. on a large animal such as a horse or a cow, or even on a dog or a person, Rainey says.

But that doesn't mean they're gone.

"It is possible that they were all killed, but we also don't know if, before the property was treated, they were spread out of that property by wild animals," Egizi says.

Then again, maybe the weather did them in.

"There are some populations [of this tick] that are less cold-tolerant, so there is a possibility that the winter killed them," Egizi says.

The ticks face another challenge: The elderly sheep has died, so their only known host won't be around anymore.

But they could also be the ultimate survivors. "These invasive species are notorious for having survival strategies that outwit us at every corner," Rainey says.

This spring, the researchers plan to go back to the site to look for any ticks that might have survived the winter and chemical treatments.

And if the longhorned ticks made it? They could pose a threat to livestock. If enough ticks feed on one animal, they can cause such severe blood loss that the host dies.

What's less certain is whether people should be worried (aside from the obvious OMG factor of being covered in ticks).

Ticks generally don't transmit diseases from person to person. Instead, they pick up a disease from an infected animal and can pass it to a person they feed on. Some native tick species in the U.S. can transmit Lyme disease and other diseases. But tick specialists aren't too concerned about the longhorned tick. Even though it has been implicated in disease transmission in countries like China and Japan, Egizi says, "It would be a question of whether they could transmit our local pathogens, which we don't know."

Meanwhile, tick specialists are in awe of the whole story. Rick Ostfeld, a disease ecologist at the Cary Institute of Ecosystem Studies in Millbrook, N.Y., called the discovery of the tick "serendipitous."

"I wonder how often this kind of thing happens, but it goes undetected," he says. "We don't really have a systematic national capability to go around looking for invasive ticks from exotic places. They might be occurring, and we'll never find out until it's too late."

Courtney Columbus is a multimedia journalist who covers science, global health and consumer health. She has contributed to the Arizona Republic and Arizona PBS. Contact her @cmcolumbus11