Accessibility links
Arrest Of Doctor In Detroit For Female Genital Mutilation Fuels Debate By Muslim Sect In Pakistan : Goats and Soda The Bohras, an offshoot of Shiite Islam, practice cutting as a clandestine ritual. Now, the arrest of a Bohra doctor in Detroit for performing FGM has inspired a frank discussion in Pakistan.

A Secretive Sect Opens A Debate On Female Genital Mutilation

A Secretive Sect Opens A Debate On Female Genital Mutilation 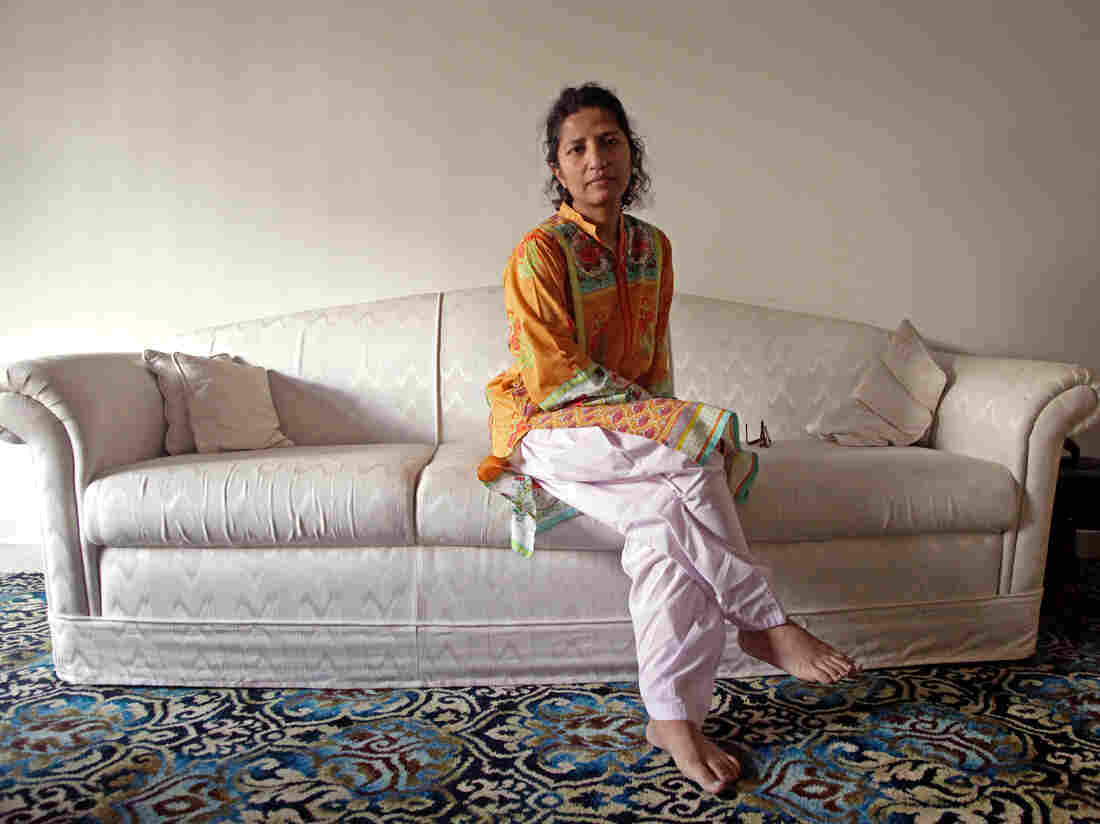 Leena Khandwala, 44, at her family home in Karachi, Pakistan. After members of her religious community in the U.S. and Australia were arrested for performing female genital mutilation, she decided to go public about her childhood experience of being cut. Diaa Hadid/NPR hide caption 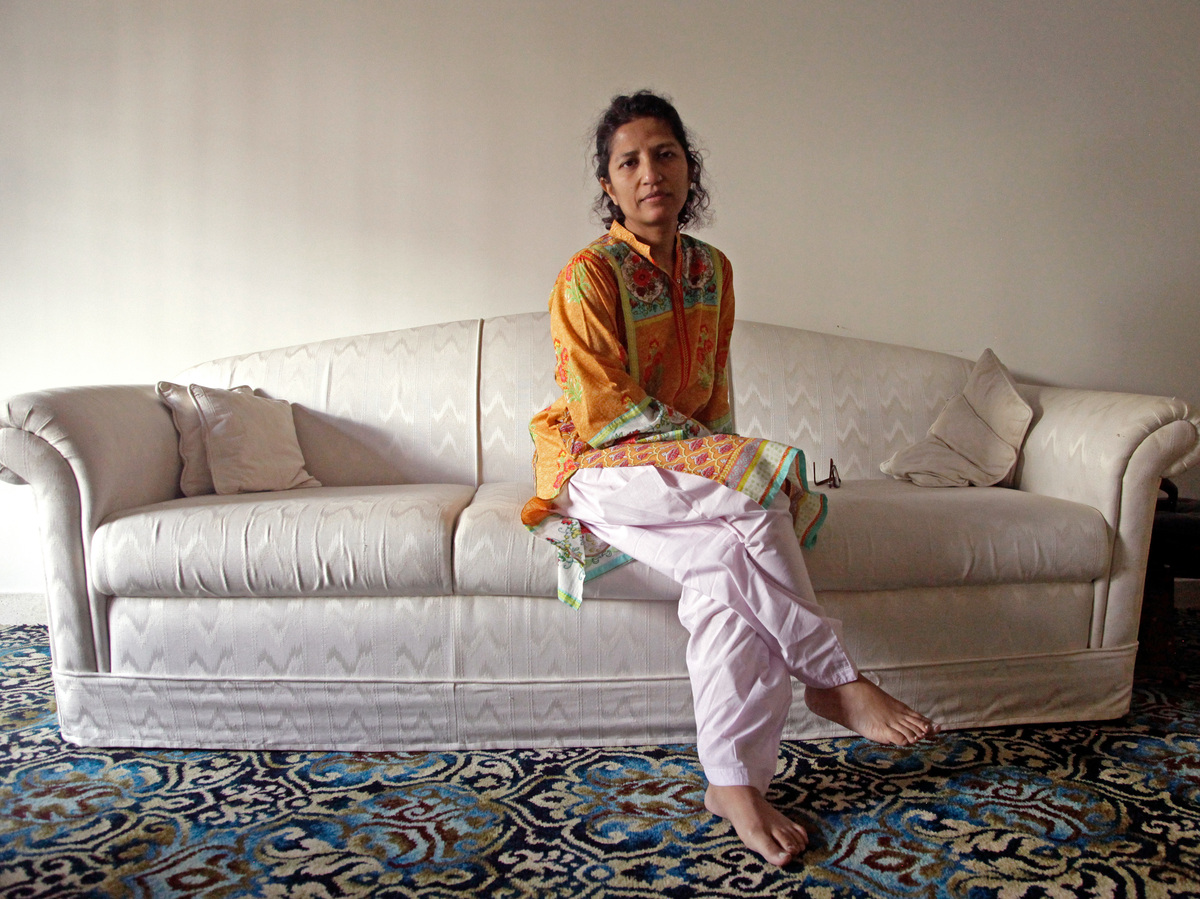 Leena Khandwala, 44, at her family home in Karachi, Pakistan. After members of her religious community in the U.S. and Australia were arrested for performing female genital mutilation, she decided to go public about her childhood experience of being cut.

Editor's note: Given the subject this story explores, the discussion includes some explicit language.

For generations, women of a secretive Muslim sect have removed what they call "forbidden flesh" from their girls. They were told they had an infection, or an insect, that needed to be cut out. The girls were ordered to never speak of it again. Others knew to stay quiet, understanding that anything involving their genitals should stay secret.

But now the community is talking.

The arrest of a Bohra doctor in Detroit for performing FGM has given added impetus to a quiet movement in the community against the practice. The Bohra call it khafz or khatna — removing the hood of the clitoris and sometimes part of the clitoris itself when a girl is about 7 years old.

"It's forced us to have a conversation," says Leena Khandwala, a 44-year-old Bohra woman who was raised in Pakistan and now lives in New Jersey. She returns to Karachi often to visit her family.

"It's also created some kind of reckoning in the Bohra community."

The Bohras are an offshoot of Shiite Islam that is headquartered in Mumbai, with prosperous communities scattered across the globe. They number several hundred thousand. The community of some 35,000 in Karachi is one of the largest in the world, according to Bohra members.

It is unclear how the practice emerged in the community. The Bohras say the Prophet Muhammad sanctioned it — and cut his daughter Fatima, who is revered by Shiite Muslims. Few Muslims hold such a belief.

Ultimately FGM is practiced because the sect's leader in Mumbai, Mufaddal Saifuddin, says so.

"We obey him," says Mrs. Ali, a 30-year-old Bohra woman who supports cutting. She has asked us to use only her surname. She described him as a father who knew best. "Why would he harm us?"

Although Bohras believe cutting women is necessary, it is not enforced by religious leaders. It is community pressure that keeps the tradition going, one Bohra follower says — often from in-laws to young mothers.

In that way, the continuing practice signals how Bohras embrace an extreme form of conformity.

That was apparent in the Bohra enclave in Karachi on a recent Friday, where worshippers turned up for prayers in the Bohra mosque in identical clothing. Men wore white skullcaps, pants and long shirts with three buttons — imitating the dress of their ancient religious leaders. Women wore distinctive, colorful matching skirts and headscarves — all cut in the same style, with ribbons tied under the chin. 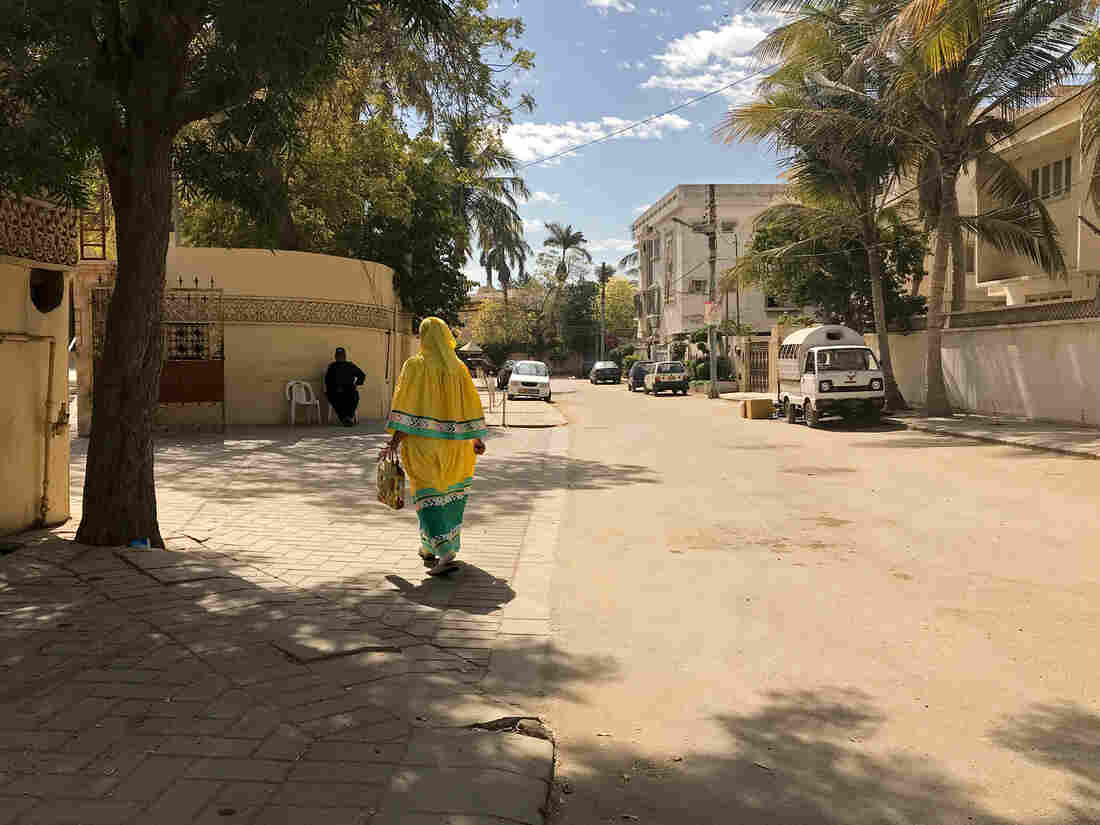 A woman walks through a neighborhood in Karachi where many members of the Bohra religious sect live. She wears the distinctive outfit of female Bohras: a long headscarf with a bonnet-style headpiece and long, matching skirt. Diaa Hadid/NPR hide caption 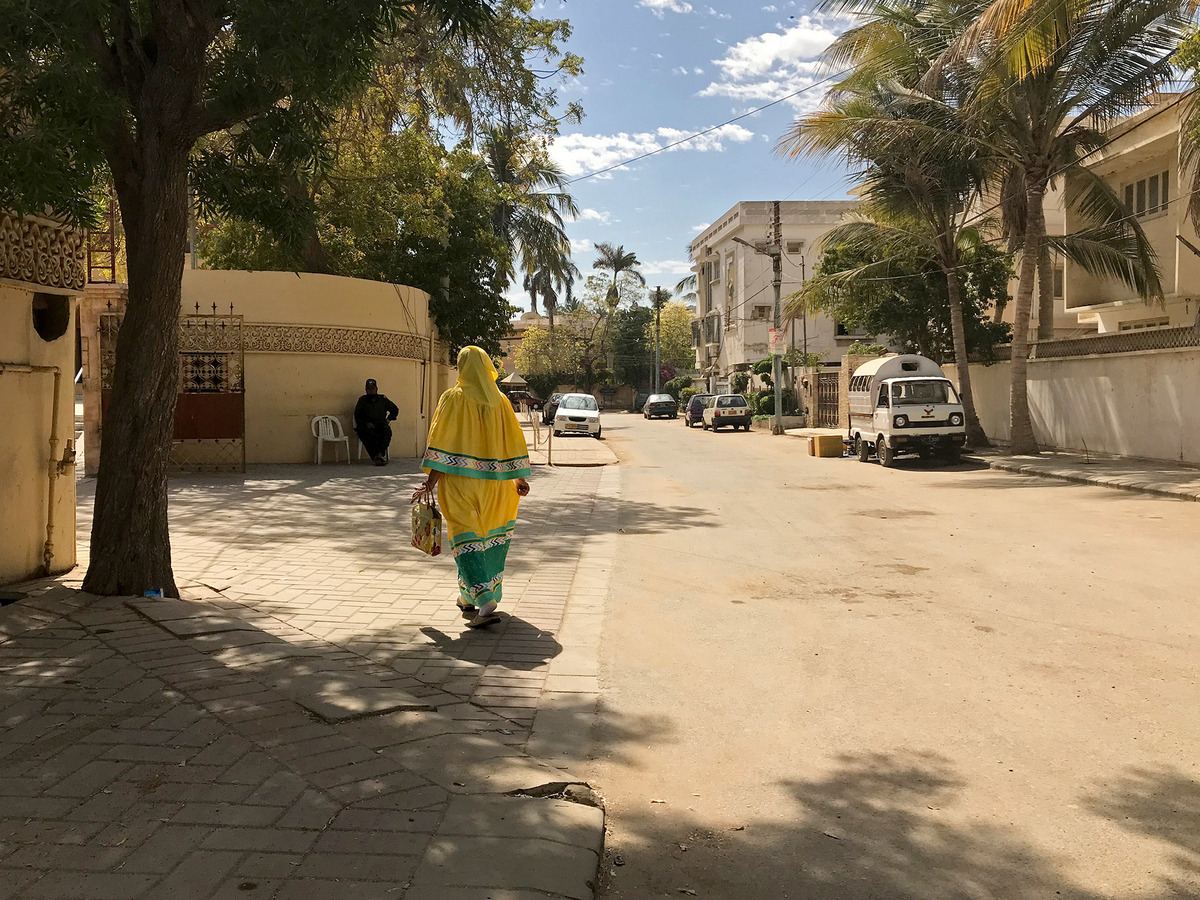 A woman walks through a neighborhood in Karachi where many members of the Bohra religious sect live. She wears the distinctive outfit of female Bohras: a long headscarf with a bonnet-style headpiece and long, matching skirt.

And underscoring that conformity, most of the dozen Bohra men and women interviewed asked to use only their first names, or stay anonymous, to protect their identities. Some worried about being excluded from community events. One woman, interviewed in her house, peered from the windows to see whether anybody could see the NPR reporters from the street.

But there is a paradox in this community. Bohra followers lead lifestyles that are astonishingly liberal in conservative Pakistan, making their support of FGM more startling. Bohra followers comfortably talked about their sex lives and bodies. They discussed parent-supervised dating and premarital sex and marital sex — but not FGM.

The silence around the Bohra practice of FGM began collapsing when Mariya Karimjee, a Pakistani-American writer, wrote of her FGM experience in 2015. It quickly went viral. Another woman, Maryum Saifee, described her experience in The Guardian. That new openness dovetailed with Bohra activism against FGM that began emerging, with groups like Sahiyo: United Against Female Genital Cutting and We Speak Out.

At the same time, an Australian court sentenced a former midwife and two Bohra community members to 15 months in jail over FGM-related crimes. Then in 2017, prosecutors brought the first criminal indictment related to FGM under U.S. law. They arrested Jumana Nagarwala, a Detroit-area Bohra doctor, for cutting at least two girls. Seven other defendants have been charged with related crimes. The case is continuing. (Any form of FGM on girls is a federal crime.)

The case in Detroit, in particular, gave new impetus to the conversation about FGM in the Bohra community. And it unleashed something rare in this close-mouthed community: discord.

Khandwala, the 44-year-old, says the case in Detroit pushed her to do something she had never considered before: go public about her own experience.

And S., a 36-year-old teacher, whose name we are withholding for her anonymity, says the Detroit incident encouraged women like her, once quietly queasy about FGM, to voice their views, sharing articles on Facebook and WhatsApp groups. Arguments ensued among pro- and anti-FGM supporters.

"On social media, it created a huge crisis," she says. She met with NPR in a cafe across town, so other Bohras wouldn't see her.

Then S. took another step. She had been pressured by her in-laws into having her oldest daughter cut years ago. Her youngest girl was meant to undergo it last year — but S. quietly refused to do it. "Social media made me realize how wrong this is."

The secrecy surrounding the practice helped her maintain the impression that she had cut her youngest daughter.

S. says she wasn't the only mother quietly rebelling against FGM. "I know for a fact a few of them will not do it."

One religious Bohra merchant says the media furor triggered angry debate about FGM during regular Q&A's with spiritual leaders. He recalled women asking, "If it's symbolic, can't we do without it?"

His own daughter confronted him, demanding to know why she was cut. "She questioned it a lot," he says. "Why did you do it? Why do we have to do it?" He says after months of discussion, his daughter now supports the practice.

(The merchant spoke to NPR to explain Bohra beliefs and why they supported cutting. Religious leaders declined to comment.)

Mrs. Ali, who supports cutting, says the debates were turning people against the practice.

"They are like a pinch of salt in flour," she says — a minority spreading through the community, changing its flavor.

The merchant and Mrs. Ali described female cutting among Bohras as a symbolic ritual, akin to male circumcision. Mrs. Ali had her own daughter cut by a Bohra gynecologist, she says.

She compared the clitoral hood to extra clothes in a crowded closet. "You just move them out of your closet," she says. "It's like that."

Cutting was meant to reduce a woman's libido and keep her away from premarital sex. "It's just to control your sex drive, that's it, but it doesn't destroy your sex drive," Rasheeda says. "I am married, my sex life is — thank God — perfectly all right."

But Khandwala says she has never shaken off the trauma of FGM.

She was 7 when her aunt told her they were going on an errand. She was taken to a dingy apartment. "The next thing I knew, my panties were being taken off and I was sort of just splayed on the ground," she says.

"Then something really sharp happened," she adds.

Her aunt ordered her to kiss the hand of the woman who cut her — a traditional sign of respect. For years, she thought the painful procedure was a punishment for some mysterious wrong.

As a teenager, she tried to discover what normal female genitalia looked like — pre-Internet. She and her cousin compared their genitalia, but they were both cut. "My cousin looked the same as I did."

In her early 20s, Khandwala engaged in sexual foreplay with boyfriends but did not have intercourse. She married about two decades ago. She says the experience of FGM left her feeling that her body was dirty and that sex was shameful.

Many of the women who oppose FGM did not cite its pain or trauma as a reason. They said they were angry because they had not consented to the procedure. They believe they should have not undergone FGM as a child but rather should have been asked as an adult if they would consent to it.

And they said they could not find any proof in Islam to justify it.

After the furor surrounding FGM cases in Australia and the U.S., the Bohra spiritual leader issued letters to communities in the West telling them not to undertake the practice if it was illegal.

If it didn't have to be done in the West, why did they have to do it in Pakistan? asked A., a 20-year-old Bohra student. It was a double standard, she argued.

She started doubting the practice after she began dating in high school. She realized being cut hadn't prevented her friends from having premarital sex. It just made it more painful, they said.

She confronted her mother: "If the only reason you did it is this whole idea of control — it doesn't do that. So why the hell did you get this done to me?"

The debate surrounding the cases in the U.S. and Australia inflated her doubts and encouraged her to speak out. She saw that her "woke" university friends were all fighting their own liberal causes in Pakistan, and it inspired her.

"If I can make a change, then I should do it," she says. "I will literally try to convince everyone I know, I will do any research required, to actually show there's no backing for this."

She was speaking out against FGM in her community, but she wouldn't speak out to women from other religious groups — at least not in a way she could be identified, she says. She didn't want to be seen as publicly trashing her own community, and she feared that Bohra women would be less likely to listen to her if she went public.

She wanted to be that secret minority in her community, spreading doubt about FGM.

She was going to be that pinch of salt in flour.

A previous version of this story incorrectly spelled Leena Khandwala's last name as Khandwalla and imprecisely gave her place of residence. She lives in New Jersey and travels often to Pakistan — she does not divide her time between the two places. She married about two decades ago, not a decade ago. And the story also incorrectly said she began having sex before marriage.