Accessibility links
A New Book Explains How Mozambique's Crocodile Attack Problem Illustrates Its Dysfunction : Goats and Soda How did the country become a hotbed of croc attacks? The answers, found in the new book "Go Tell The Crocodiles," help explain why the country is mired in dysfunction and poverty. 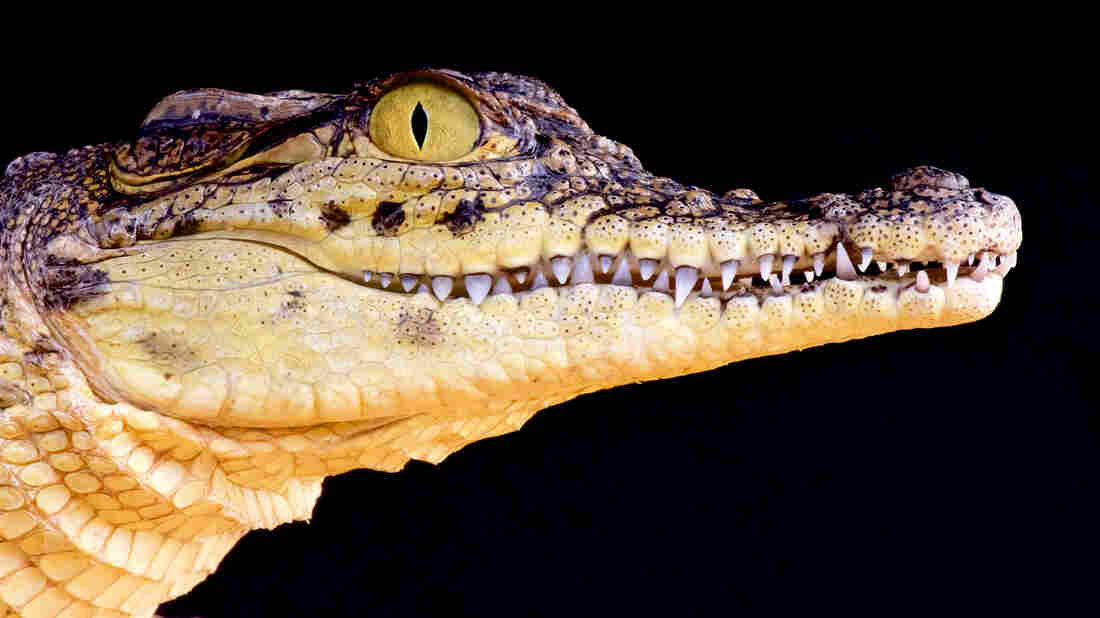 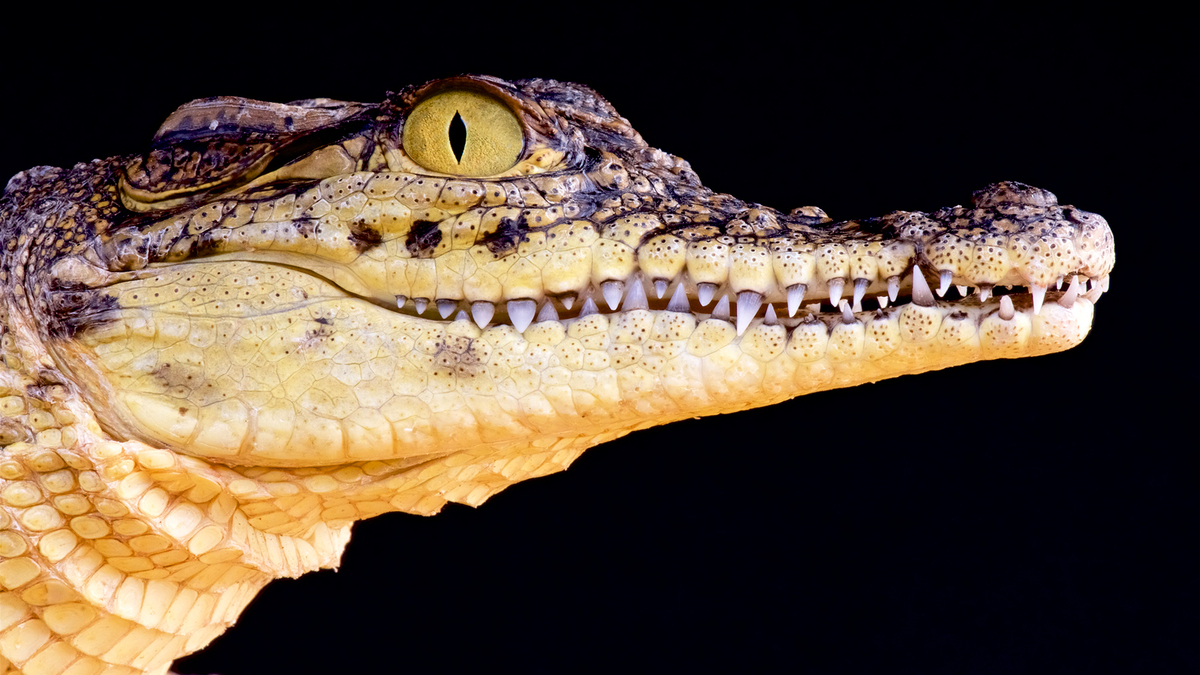 Portrait of a Nile crocodile.

The hamlet of Bawa was in uproar. A pretty, 20-year-old villager named Amelia had vanished shortly after heading to wash her dishes in the shallow river that runs through this remote western corner of Mozambique. Crocodiles often lurk just below the surface, and over the last decade this community of about a thousand people had lost almost 50 of their number to attacks. So it seemed clear that Amelia was the latest victim.

But it wasn't long before blame was shifted elsewhere: Practically the entire village became convinced that Amelia's aunt, an older widow named Liveness Mandar, had turned a magic charm into a live crocodile and ordered it to kill Amelia. And then ... Mandar herself confessed to the crime.

The story of why Mandar chose to make this confession — and the government's role in alternately punishing and protecting her — is one of the many surprising and illuminating accounts in a new book about Mozambique, Go Tell The Crocodiles by Rowan Moore Gerety.

Gerety, a Miami-based journalist and former Fulbright fellow in Mozambique, brings us a portrait of a country that's a paradox: In the more than 25 years since the conclusion of its civil war, Mozambique has seen its economy grow at astronomical rates. Yet that prosperity has not trickled down to a population that remains desperately poor, prone to cholera outbreaks and largely ignored by government officials. At best, they're indifferent and, at worst, horrifically corrupt.

Gerety offers plenty of thoughtful big picture analysis. But it's through his profiles of dozens of individuals dealing not just with crocodiles but all manner of problems that we come to understand how things got to this point in Mozambique — and why it's so challenging to fix them.

Nowhere is this more true than in his chapter on Mozambique's crocodile problem. We spoke with Gerety about two of the people he profiled in that section.

So why did Mandar admit to a crime of which she was clearly innocent?

Gerety notes that it was not the first time Mandar had been accused of conjuring murderous crocodiles from a magic amulet. Suspicion had fallen on her five years earlier when a crocodile killed her brother's son.

"It's a belief that's not uncommon there," says Gerety. "This idea that humans can imbue these kind of wood or cloth animal charms in the shape of these animals with the spirit of the animal so that they come to life and go after people."

And just as in other places where belief in sorcery is widespread — colonial America comes to mind — widows such as Mandar are often the ones accused.

A mob of villagers began beating Mandar, including not just Amelia's relatives but the community policeman. And so Mandar figured her only hope of surviving lay in quickly admitting guilt.

It proved a savvy move. The village leader immediately stopped the beating and handed Mandar over to a "community court" — a traditional system for settling disputes that is technically not official but is accepted by the government in order to provide some justice in remote rural areas beyond easy reach of the court system. The community court sentenced Mandar to a week of "spiritual healing" with a traditional doctor and several days of cleaning the police station, and prohibited her from ever using a crocodile amulet again.

So Mandar was able to continue living in the village, albeit among neighbors who give her a wide berth.

As ignorant and cruel as these villagers may seem, Gerety stresses that their reaction stems from an impulse we all share: the human inclination to believe in the supernatural often stems from a need to gain some feeling of mastery over circumstances we can't control. "We all need a way to make sense of tragedy, a way to make sense of hardship," he says. "And the ability to point your finger and say, 'Now, at least, this problem makes sense to me,' is powerful and somewhat cathartic."

In other words, Mandar was able to keep her life in exchange for giving her community that cathartic relief. And by allowing the community court to adjudicate the case, the government was effectively doing the same.

And yet, Gerety shows how this case is an example of a larger system that explains why crocodiles attacks will continue. By periodically allowing people to vent their fear and frustration on a scapegoat, the government can avoid the much more difficult task of addressing the real reason that crocodile attacks are such a problem in this part of Mozambique. And it's a point that's even sharper when it comes to Gerety's next profile ...

Gerety explains that Mozambique's distinction as ground zero for crocodile attacks stems from the country's tumultuous political history. Until independence in 1975 the country was a poorly managed colony of Portugal. And in one of their final acts of exploitation, Mozambique's colonial rulers built a dam near Bawa that dramatically changed the ecology of the region.

"Now the river, instead of just describing this small line, starts to fill in all the valleys on either side and you get this kind of fractal snowflake-shaped reservoir and all the little inlets and bays that have ended up being really good crocodile habitat," he says — essentially a sort of "crocodile heaven."

The consequences were not immediately obvious because civil war broke out soon after, prompting much of the population in the area to flee. But 20 years later, with the war's end, people began returning in droves, setting up today's constant run-ins with crocodiles. 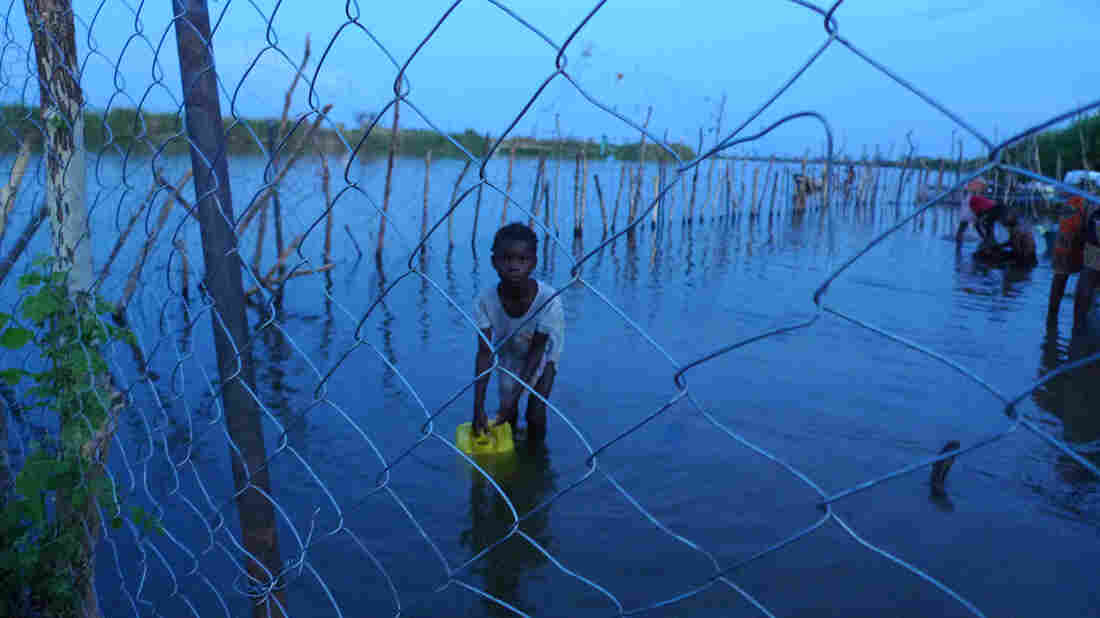 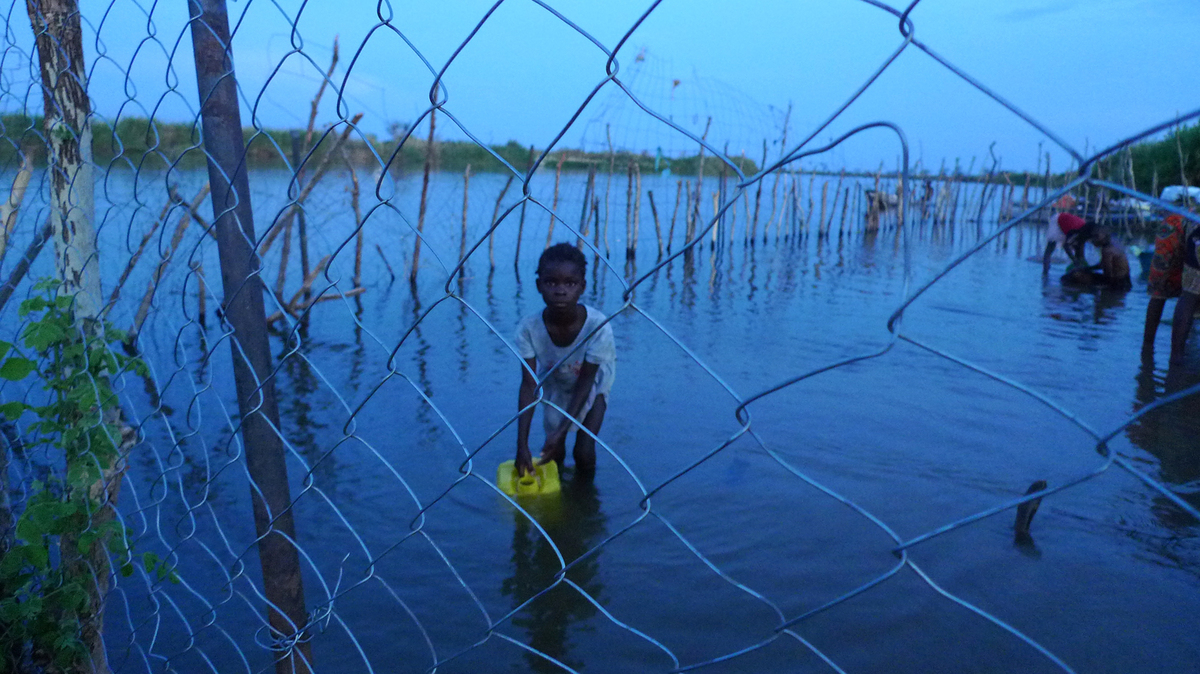 A child collects water inside a makeshift chain-link enclosure.

Gerety describes a few attempts to address the problem that could potentially work: building more wells in the villages so people don't have to spend as much time at the river's edge; resettling people to safer zones; or funding business enterprises that could give communities an income source other than fishing in crocodile-infested waters — for example working as guides for crocodile trophy hunter or farming crocodiles for their hides.

But these efforts have repeatedly faltered due to poor management and lack of government support.

Instead, says Gerety the most visible government effort to solve the crocodile problem is completely ineffective. "Basically once a year they go and shoot a bunch of crocodiles." 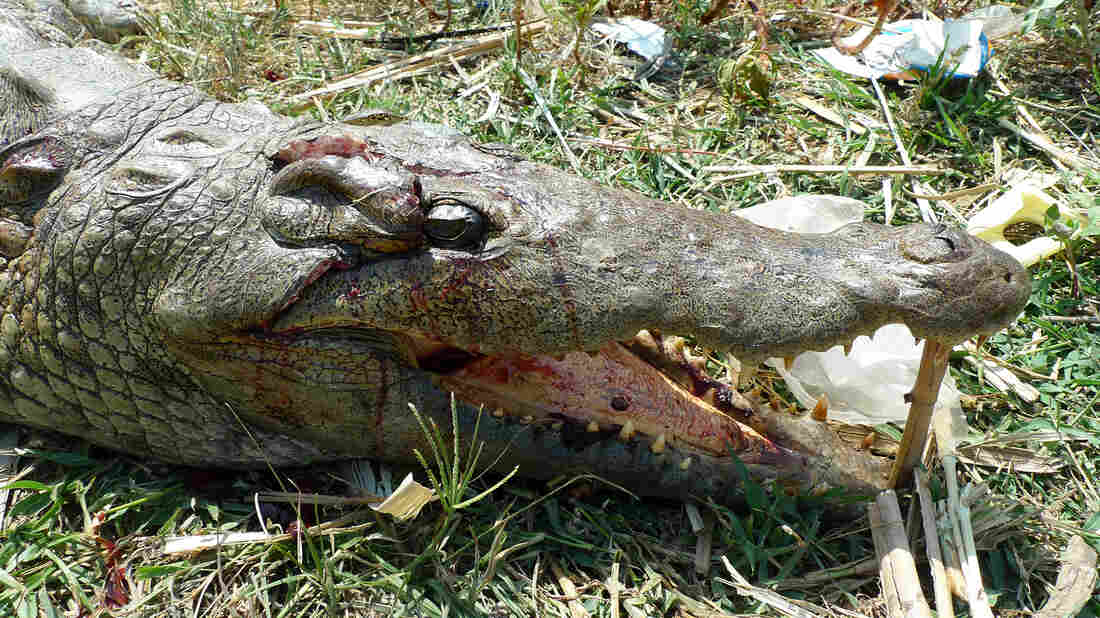 The body of a crocodile that was killed in a cull. Rowan Moore Gerety hide caption 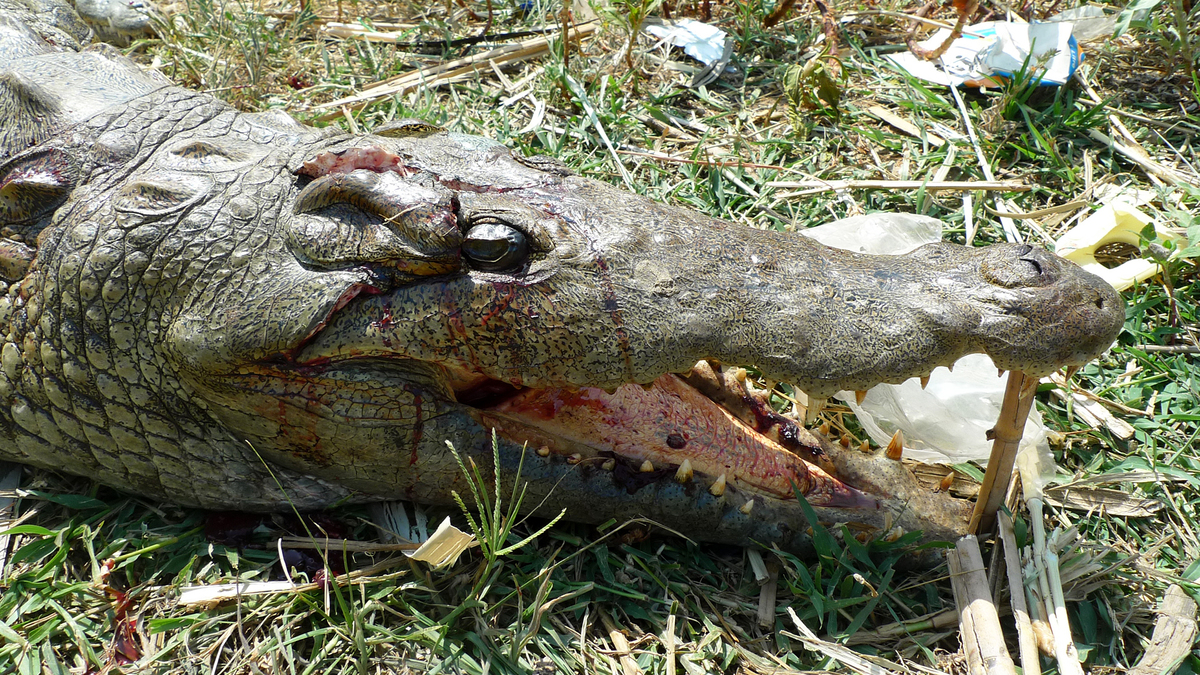 The body of a crocodile that was killed in a cull.

The problem with this, notes Gerety, is that the crocodiles that are responsible for killing humans — typically large, ten-foot long males — are the hardest to catch. So the culls end up targeting smaller, less dangerous crocodiles. Also, "upstream you've got hundreds and hundreds of miles of very favorable crocodile habitat." So even if the cull were able to remove all the problematic crocodiles from an area, "you have more crocodiles that can swim down ... and start doing the same thing."

None of which is lost on one of functionaries charged with carrying out the annual cull. Florencio Gerente Sixpence emerges as one of the more poignant figures in the book. "He's a great guy," says Gerety. "A very smart, capable civil servant who's spent most of his career managing human-wildlife conflict." And even as Gerety watches Sixpence pull crocodile carcasses from the water to display to the villagers, "he'll be the first to tell you that this culling isn't going to solve the problem."

Sixpence then explains to Gerety that his bosses have no interest in hearing that. Conducting the culls is an easy way for the government to appear to be doing something. And come election time that's what matters.

In a scene that gave rise to the title of the book, Sixpence tells Gerety that if he doesn't do the cull, when the next election comes up, people in the villages would be sure to turn on the ruling party's candidate, telling him, "Go tell the crocodiles to vote for you."