Accessibility links
Magazine Photo That Promotes Public Breastfeeding Stirs Up Debate in India : Goats and Soda The magazine, in Kerala, India, featured a model with a baby at her breast. Supporters and critics can't stop talking about it. There's even a threatened lawsuit. 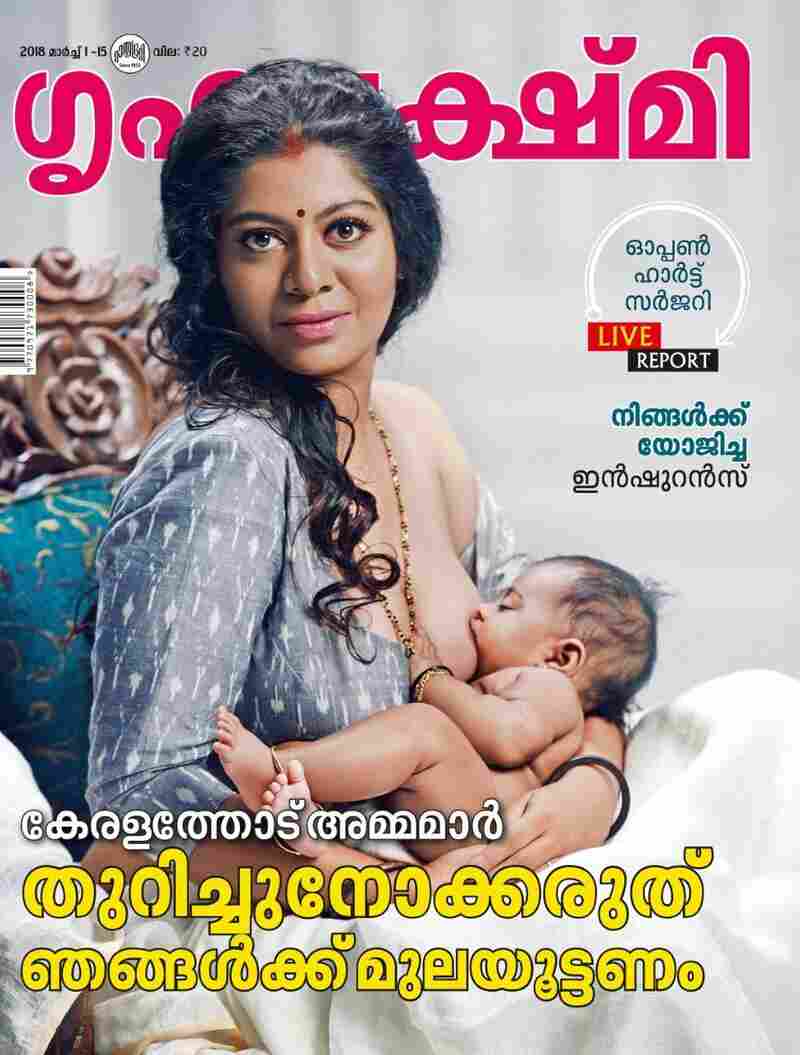 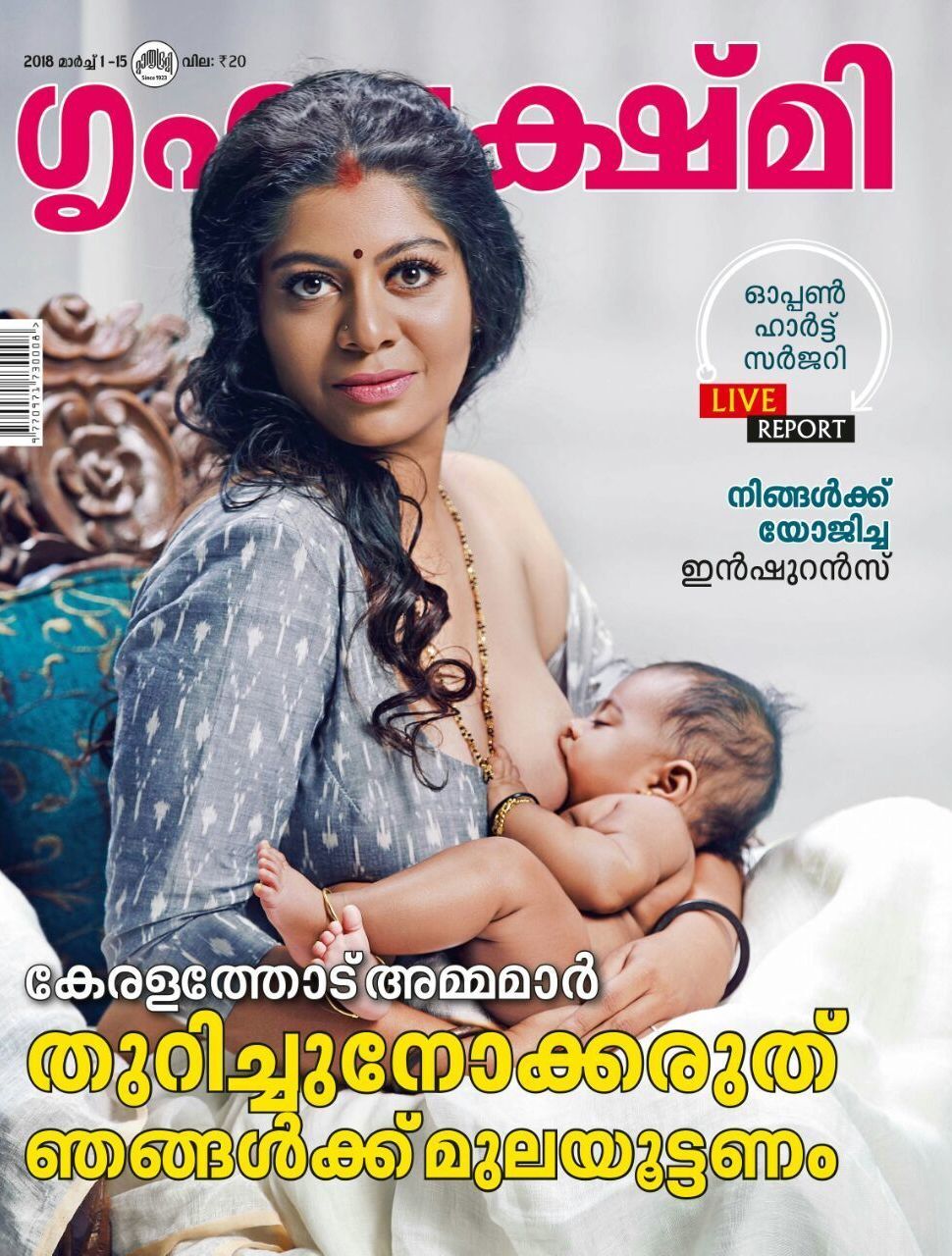 A photo of a woman who appears to be breastfeeding created a stir in India when it ran on the cover of the magazine Grihalakshmi. Released on March 1, the cover polarized Indians, evoking applause and outrage on social media and dominating prime-time TV news.

The controversial photo features 27-year-old model Gilu Joseph dressed in a gray blouse, cradling a baby at her breast while she stares squarely at the camera.

The cover, along with a headline that translates, "Don't stare — we are breastfeeding," was part of an issue dedicated to the taboos around breastfeeding in public and is part of the magazine's campaign for International Women's Day, which falls on March 8. The story inside features interviews with breastfeeding mothers and their photos.

Published in the southern state of Kerala in India in the local language of Malayalam, Grihalakshmi is a fortnightly women's magazine.

Shortly after the cover was released, the magazine found itself in the eye of a social media storm. "No mother would ever look at an onlooker with such a 'come hither' look while breastfeeding the baby. This is a sick cover! Meant to titilate[sic]," Indian columnist Shefali Vaidya wrote on Twitter.

Every single mother I have known, including myself, has eyes ONLY for the baby while feeding. It is a sacred act. No mother would ever look at an onlooker with such a 'come hither' look while breast-feeding the baby. This is a sick cover! Meant to titilate. https://t.co/L0LISmFpsB

Users posted pictures of women breastfeeding in public with their breasts covered with a sari suggesting that the exposed breast in the cover was unnecessary.

One of the controversies swirled around the cover subjects. The model is single and has no children. Critics as well as people who supported the cover raised the question of why the magazine had chosen to feature a model instead of a real mother.

Vinod Mathew Wilson, a lawyer based in Kollam, Kerala, brought a legal case against the model and the publishers of the magazine under sections three and four of the Indecent Representation of Women Act of 1986. According to Wilson, by choosing to feature a model instead of a real mother the magazine had not acted "in good faith."

"The intention of the magazine is to only induce the people to buy it. It's just a marketing tactic," Wilson said.

Moncy Joseph, the magazine's assistant editor, said the magazine originally planned to feature a real mother and her baby on the cover. But soon they realized they would not be able to get a mother on board to pose for their cover in time to make the deadline. So they opted for the model Gilu Joseph, who is also a writer and poet and who feels strongly about the issue.

"The negative reactions show that breastfeeding [in public] is still considered 'shameful' in India," Joseph told NPR in an email. "This taboo echoes other discrimination against the body [sic] of women."

Meanwhile, the cover also received an outpouring of support, including from UNICEF.

Breastfeeding a baby within the first hour of his or her birth can reduce neonatal deaths by 22%. Thank you @Grihalakshmi_ and @mathrubhumi for supporting #breastfeeding = #EveryChildALIVE https://t.co/5zv2SaVO0m

Bollywood actress Celina Jaitly, mother to three sons, congratulated the magazine on Twitter and told those who didn't agree to "look away."

As a mom of 3,If my baby is hungry I WILL feed him ANYWHERE/ ANYTIME irrespective of what people think,makeup or no makeup, aesthetic or not,beautiful or not, politically correct or not I WILL feed my baby,so look away if you don’t agree.
Congrats @Grihalakshmi_ @Mathrubhumi pic.twitter.com/hZlCYx2cpa

It’s a forward looking step for Mallu land. A place where I can’t wear half sleeves or wear pajamas to college, sit beside a man in a public bus, or even step out after 7 & no terrace after 6, @Grihalakshmi_ is breaking the taboo of #breastfeeding . Hopefully a first of many👏🏻 pic.twitter.com/2NwFgq7D34

The response to the cover was positive among the almost 64,000 members of a Facebook group called Breastfeeding Support for Indian Mothers, Madhu Panda, one of its administrators, told NPR. "Overwhelmingly, people have just said this is amazing. It's a brilliant thing to see," Panda says.

According to Panda, India's patriarchal society poses cultural challenges for breastfeeding in public. "Sometimes spouses are not supportive and don't like it when other people look when their wife is nursing," she says. The Facebook support group aims at normalizing breastfeeding in public by telling mothers that it's okay to nurse anywhere and whenever the baby needs it.

Breastfeeding in public is, of course, a taboo in much of the world. Critics of the cover found the model's direct gaze and exposed breast too provocative. "If women read comments [sexualizing breastfeeding] they may start thinking, "is that what someone is thinking if they see me feeding my child?"" says Panda, adding that the group is trying to fight against this notion.

The controversy also sparked a discussion about private spaces for nursing mothers in public areas in India — or the lack thereof. But while private rooms might help nursing women in the early days when they're new to it and more self-conscious, says Panda, having to find a place to go to feed a baby eventually becomes a hindrance. It's better to promote nursing in public so that no one blinks an eye if they see a baby being fed, she says.

The debate goes on in India. One TV station ran a ten-minute report on the cover.

And it's perhaps worth noting that this is not the first time a breastfeeding cover on a magazine has caused a stir. A 2012 issue of Time magazine featured a breastfeeding image that also ignited a fierce debate, although for different reasons – the child in the photo was 3 years old.

Sushmita Pathak is a freelance journalist and radio producer. Follow her at @sushmitza.