Accessibility links
Cape Town's Water Shortage Takes The Greatest Toll On Water-Starved Townships : Goats and Soda A three-year drought has brought on water restrictions — and talk of "Day Zero," when Cape Town will run out of water. But for many people in the townships, a short supply is nothing new. 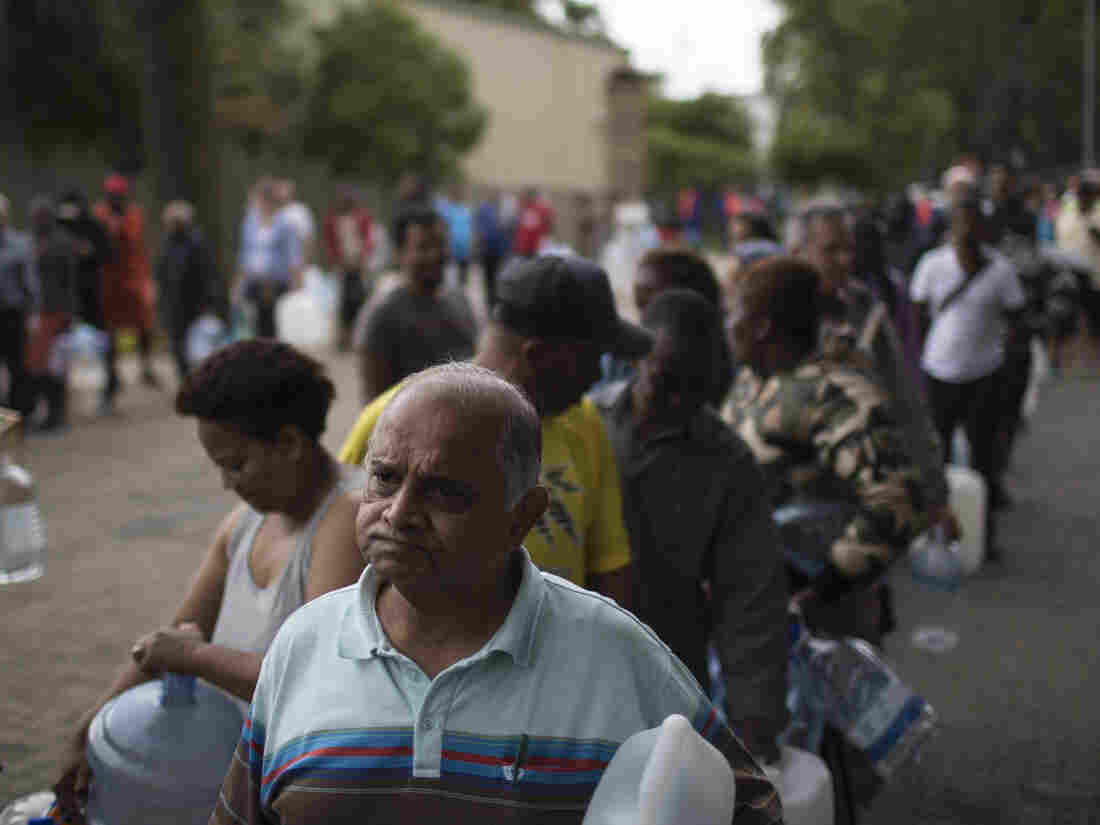 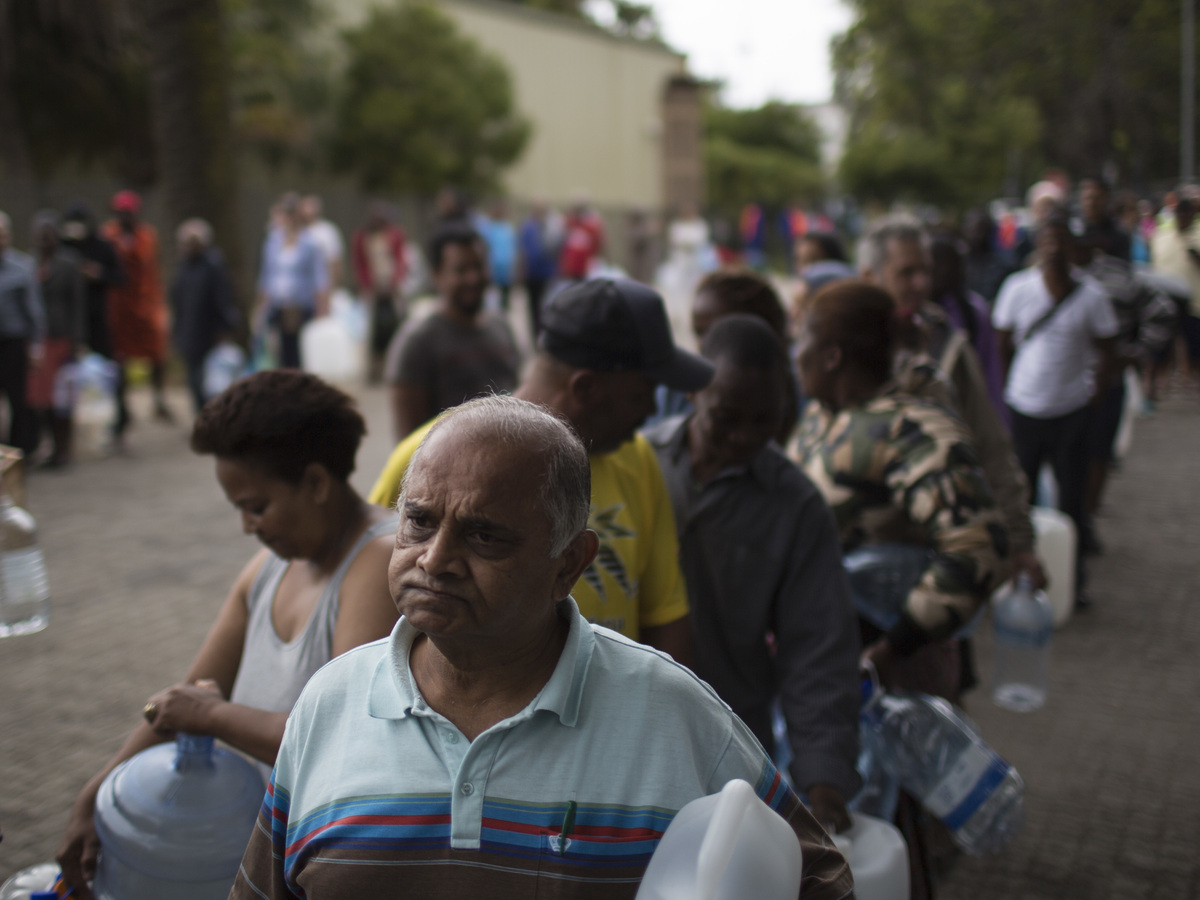 In the front yard of a modest house in Cape Town's Khayelitsha township in South Africa, Samantha Tibisono washes her clothes with water from a communal tap.

She lives in Site C, a neighborhood where nearly two-thirds of residents live in shacks with no running water. The city provides communal taps and toilets for sanitation, but lately the taps have run dry.

Inside their home, Tibisono's daughter Asavela, 17, points to buckets of water on shelves and under a table.

"Sometimes [we go] two days without water," she says.

Parched by a historic three-year drought, Cape Town officials have warned for months of a "Day Zero"— a moment when people will have to line up for daily water rations because the dams that supply the city will be too low to pump water to houses.

But many people around the city already face a water shortage. Some say every day is Day Zero.

To stave off Day Zero, Cape Town has imposed sharp limits on water consumption — 13 gallons per person per day — with high fees for overuse. (By comparison, the average American uses 88 gallons a day.) The city also lowered the water pressure in its pipes, which officials say is the reason that Tibisono's tap is sometimes empty.

Deputy Mayor Ian Neilson says frugal residents have helped pull the city back from the brink. Since January, water consumption has fallen from over 600 million liters a day to about 520 million. That's half of daily consumption in 2015.

"Provided we continue our current water-saving efforts, Day Zero can be avoided completely this year," Neilson said in a statement.

Down the street from Tibisono, Kwande Kulu sprays vehicles with a pressure hose. He says city officials threatened to close his car wash for wasting municipal water. So he paid to drill a well and now uses groundwater to wash the cars.

"If you have a borehole, you're sorted," he says. "You're safe." (That's a deep, narrow shaft bored into the ground to extract water.)

One of his customers, Zola Mfakado, drinks beer and eats grilled sheep meat while he waits for his car. He says he's one of the lucky few in the township with a flushing communal toilet. Many others use buckets. About 13 percent of Cape Town's residents lack indoor plumbing, according to a 2013 city report.

"The issue of Day Zero doesn't mean anything to us because we've always been on Day Zero," Mfakado says.

The water shortage in Cape Town has had far-reaching economic consequences.

Labor lawyer Michael Bagraim, a South African Parliament lawmaker with the Democratic Alliance opposition party, says Day Zero warnings helped curb water use — but also scared away tourists from the country's second-largest city. Agriculture has likewise been affected, with crops drying out and farmers releasing water from private dams to help shore up the dwindling supply.

Bagraim estimates that the water shortage has led to the loss of about a quarter-million jobs in the Western Cape province that includes Cape Town. Prices for fruit, vegetables and wheat are expected to rise.

"It has created anxiety in the business community," Bagraim says. "That fear translated into many of the businesses saying, 'Well, we want to retrench.' "

City counselor Xanthea Limberg says Cape Town is working on several desalination plants and groundwater development projects, which should begin to bolster the water supply in the coming months.

For now, residents are relying on charity and their own ingenuity.

At the Isikhokelo Primary School in Khayelitsha, Principal Yoliswa Qomoyi recently put covers and padlocks over outdoor taps — and closed all but one faucet in each of the student bathrooms — to comply with water restrictions. She asked parents to send their kids to school with water.

"With us, there is high unemployment rate, so parents cannot afford to buy them water from the supermarkets. Its not easy for them," Qomoyi says.

On a recent morning, she was relieved to see a truck pull up to the school loaded with 500 gallons of water in two pallets of bottles. Schoolboys wearing matching green cardigans and gray slacks hopped into the truck and formed a chain to pass them to their classmates, who carried them into the school's courtyard.

Hlomla Myendeki, 12, says he walks more than a mile to school, carrying water from home that he often has to share when he arrives. "How can you stand with other learners but you can't share with them?" he asks.

As he spoke, students crowded against a wall to pose for pictures with hundreds of water bottles.

Awonke Matinise, 12, says the water shortage makes school difficult. "Sometimes I get thirsty and realize that there's no water in our school," she says. "So I just have to just stand there and write the papers." 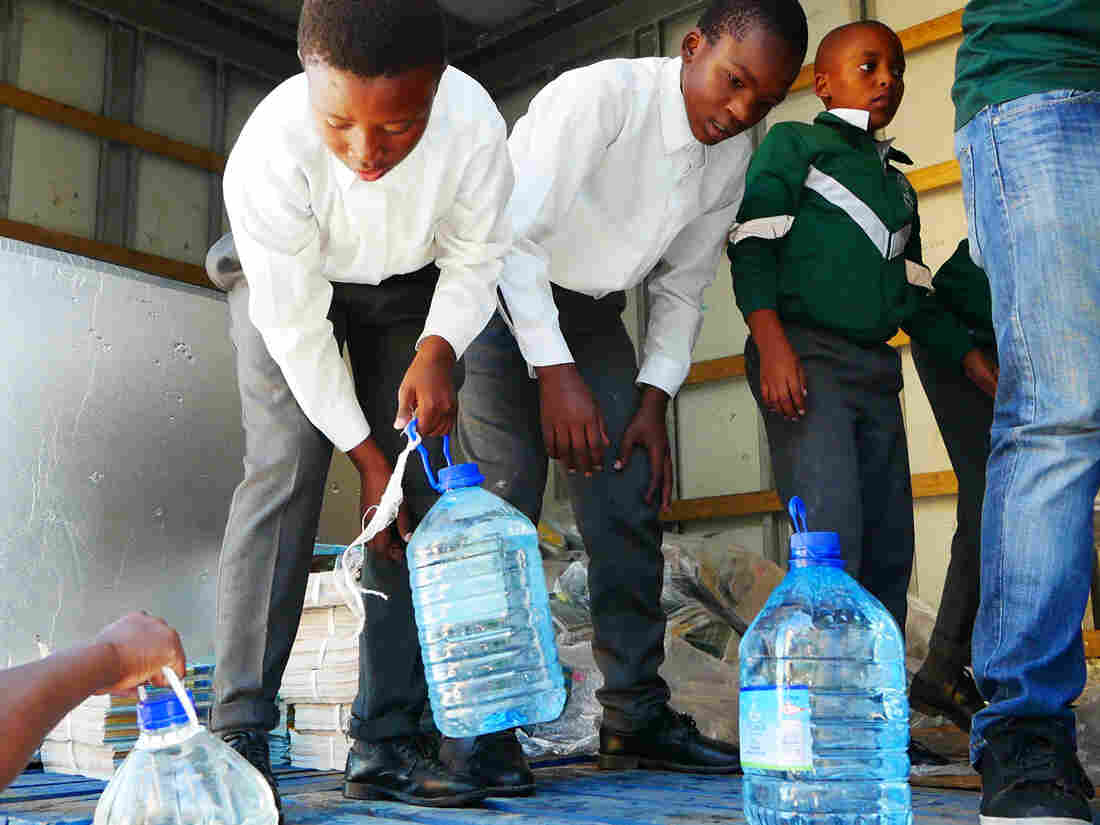 Schoolboys unload donated water at the Isikhokelo Primary School in Khayelitsha township. The principal shut off most taps to keep to tight water restrictions and has told students to bring their own water. Daniella Cheslow/NPR hide caption 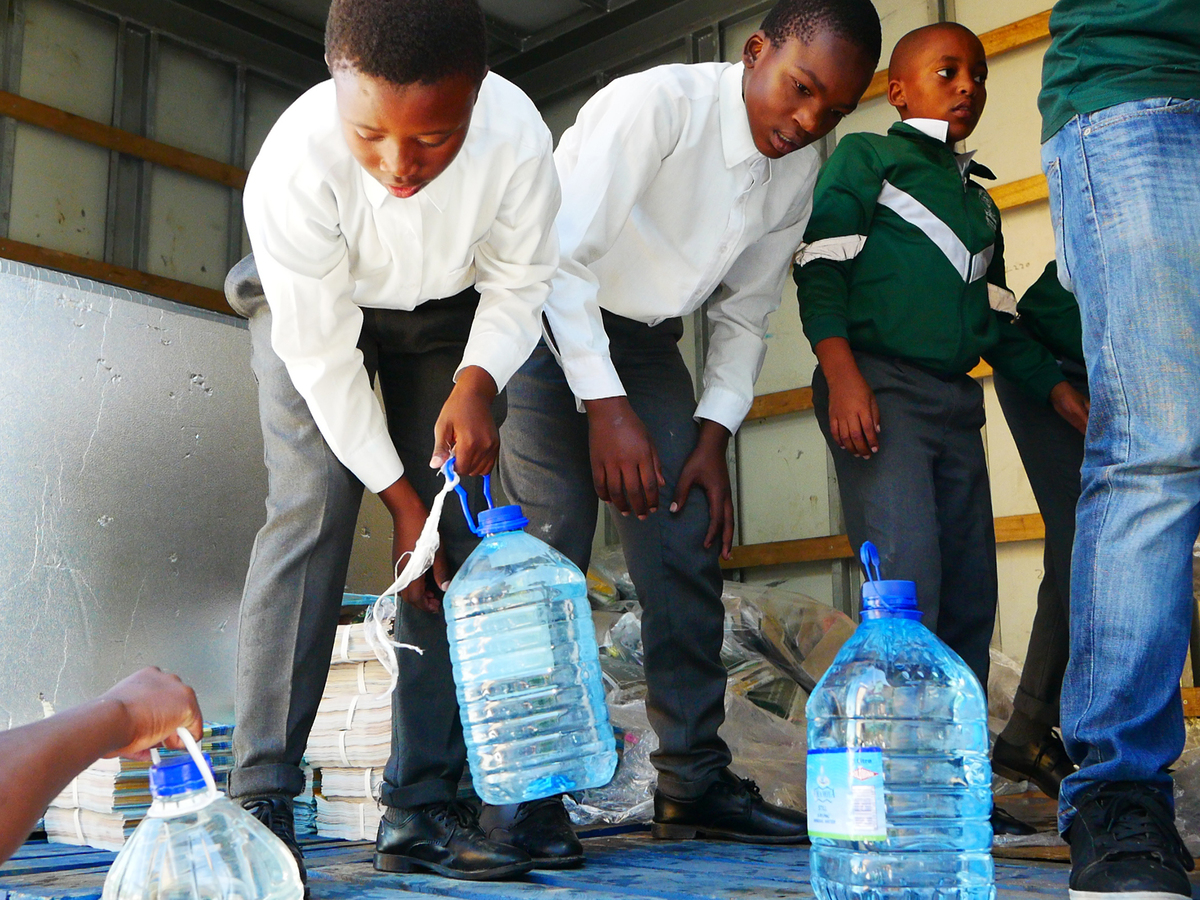 Schoolboys unload donated water at the Isikhokelo Primary School in Khayelitsha township. The principal shut off most taps to keep to tight water restrictions and has told students to bring their own water.

The burden of thirst

The water that arrived at the Isikhokelo school came from the Gift of the Givers Foundation. The charity's Cape Town program manager, Ali Sablay, says he constantly fields calls from schools, institutions and homes for the elderly.

The charity hopes to provide longer-term solutions to the water shortage. In February, it bought a drill rig to dig 200 groundwater boreholes across Cape Town in the coming months.

Sablay recently visited the rig at the Peak View Secondary School in the suburb of Athlone. It clattered in the schoolyard as it probed the earth for groundwater and splattered fine wet dust over students on their lunch break.

Sablay says that after the water from the borehole is treated, it will supply not only the school, but also the surrounding neighborhood.

"That will be a big relief to the school community," says Peak View Principal Oswald De Villiers.

The vast majority of his students live in townships, he says. To get water, they have to walk to communal taps.

"Once we find water," he says, "we are going to give each and every learner 5 liters a day to take home, so we can also ease the burden on them."

For now, the water restrictions are a hardship even for the fairly well off.

Musician Bylelwa Sakayi, a mother of two young children, says the rules and limits are hard to comply with.

Sakayi's brick house in Khayelitsha has indoor plumbing. But she lives in fear that authorities will cut off her water or charge her high rates if she exceeds restrictions.

For a recent music gig, Sakayi stayed at a hotel in a Cape Town suburb and got a rare treat.

Daniella Cheslow is an international reporter covering climate and cuisine. When she's not on the road, she works as an editor at NPR headquarters in Washington, D.C. Previously she reported for AP in Jerusalem. Follow her @dacheslow.