Accessibility links
UNICEF Data On Child Marriage Shows Major Drop But Critics Raise Some Concerns : Goats and Soda A new report cites tremendous progress in bringing down rates of child marriage, especially in India. But critics raise concerns about some of the data points. 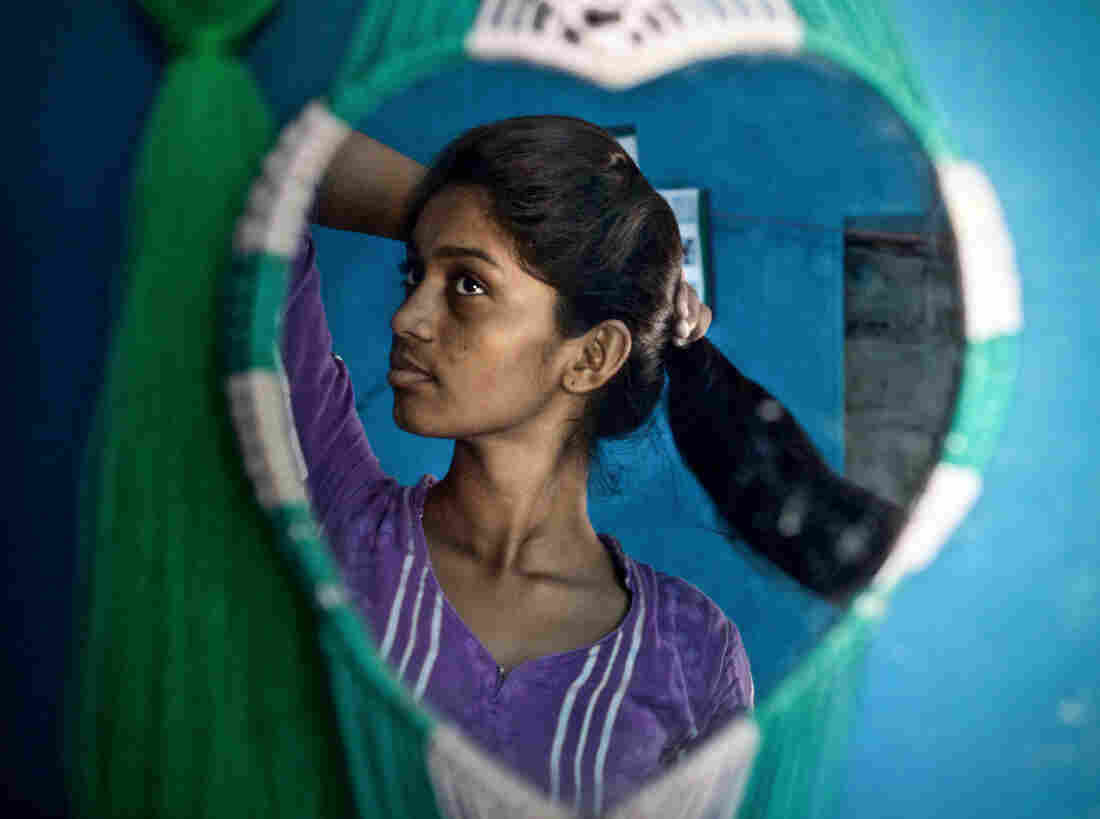 Durga, now 22, was married in her northern Indian village at the age of 15. Her father forced her into the marriage. But he had a change of heart right after the wedding and refused to send her to her husband. After much careful diplomacy, he managed to dissolve the union. Swati Vashishtha for NPR hide caption 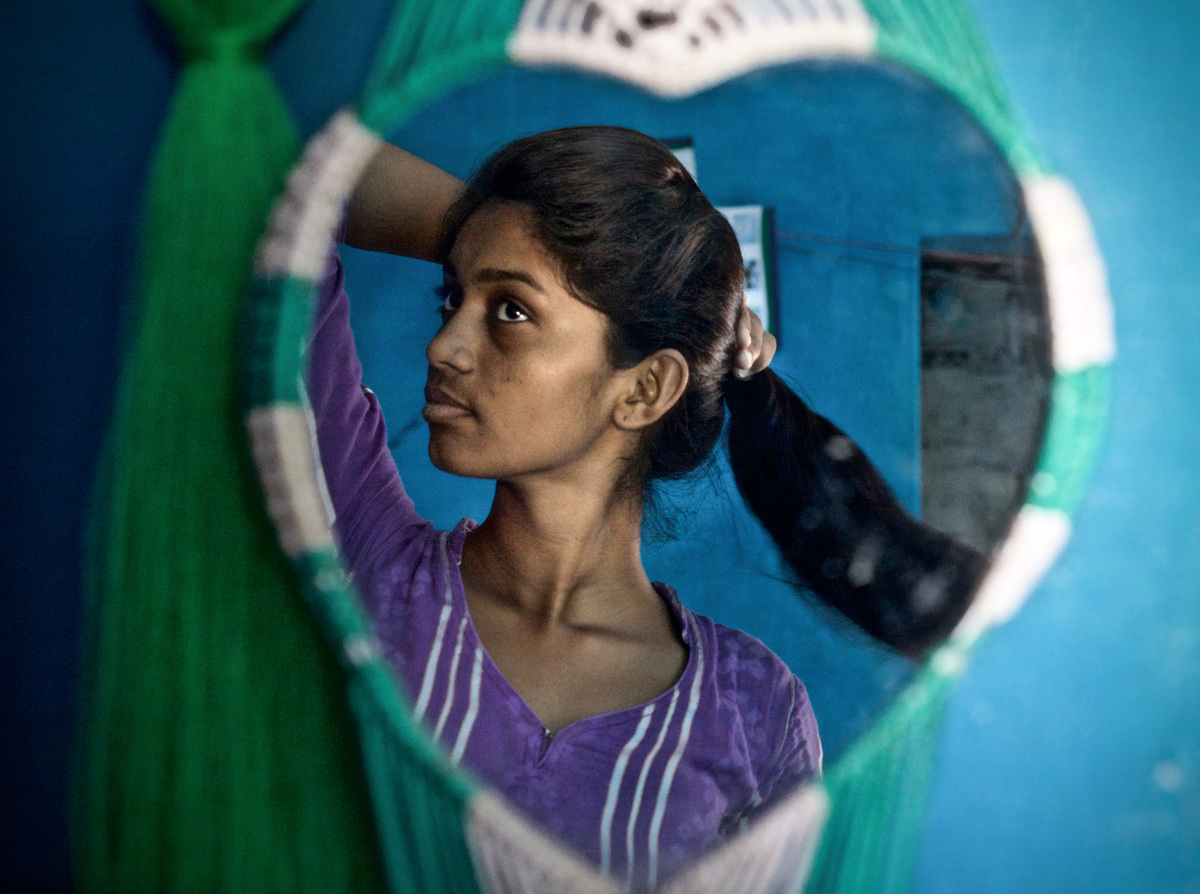 Durga, now 22, was married in her northern Indian village at the age of 15. Her father forced her into the marriage. But he had a change of heart right after the wedding and refused to send her to her husband. After much careful diplomacy, he managed to dissolve the union.

"India has seen an overall decline. A decade ago, 47 percent of all girls between the ages of 20 and 24 were married before they turned 18," said Dhuwarakha Sriram, child protection specialist at UNICEF India. "Now that number is down to 27 percent of girls, or about 1.5 million girls per year."

Because India's population is so great, the country's downward trend is being credited by UNICEF for significantly bringing down the global numbers of child marriage.

Authorities in India are congratulating themselves.

There are indeed reasons for optimism. Sriram believes that the new data, when compared to previous data on child marriages, shows a drop in the number of annual incidents as well as an increase in the average age of a child bride, from 13 to 16.

"This trend is borne out by the census data," she says.

But several activists say the report may not quite reflect reality on the ground. There are two main issues: The numbers are likely not as low as they appear in the report. And they do not reflect the notable differences in the rate of child marriage in different parts of India.

Who'd Confess To An Illegal Marriage?

Where does all this data about child marriages come from? It's not collected by UNICEF. Rather, it's compiled by local governments.

In India, the government asks about marriages – and the age of the bride and groom –as part of the census data that is compiled every decade. In addition, every seven years or so, the National Family Health Survey sends surveyors door to door to ask families about births, deaths and marriages since the last survey. And the data would include the age at which marriages take place.

What are the odds that people are being truthful? Everyone agrees there is underreporting — even UNICEF. Says Sriram, "People are aware of the illegal age of marriage, and this results in cases of underreporting, which happens in all kinds of surveys."

And parents are increasingly adept at concealing child marriages.

Kriti Bharti runs Saarthi, a non-governmental organization that works to prevent and annul child marriages in the northwestern state of Rajasthan, where child marriage rates are among the highest in the country. A third of all girls there marry as minors according to census and UNICEF data.

Bharti said that in Rajasthan, "People have become smarter, they recognize how to evade the law [prohibiting child marriage]. They make sure it's kept quiet. They do the marriages late at night" and with only a small number of attendees. That reduces the chance that a neighbor or relative might alert the police.

Once the marriage has taken place, an underage bride is not sent to live with her husband and his parents until after she reaches the age of puberty. So even if authorities are tipped off and investigate a child marriage after the fact, families simply deny any wrongdoing. The child is still at home. And if they didn't hire a photographer, "there are no photographs or other evidence," Bharti says. "And our law doesn't punish anyone without proof."

Plus, in some parts of India the authorities aren't always interested. Child marriage may be accepted as part of the culture.

Bharti believes there has been little to no progress in the areas she visits.

On the other hand, there has been marked change in some areas. A thousand miles east in the state of Bihar, 42.5 percent of women were married as minors — down from 60 percent just a decade ago.

State averages, agrees Sriram of UNICEF, "mask the reality of what's happening at the district level." For example, in the state of Uttar Pradesh, she says, a relatively low 21.2 percent of women between the ages of 20 and 24 report they were married as minors. That state even has some areas where zero child marriages were reported. But it also contains the geographic area with the highest rates in the nation: 68.5 percent of all girls in the Shravasti district marry as child brides.

The Appeal Of Child Marriage

Why does this illegal phenomenon still persist? The local populations "do not understand why child marriage is a crime," says Bharti. "It's a religious practice that has to be done. Canceling a wedding is shameful."

There's an economic underpinning for these child marriages, says Sunita Menon, a director at Breakthrough, a nonprofit group that has partnered with UNICEF and the state of Bihar to prevent child marriage.

The younger the bride, the smaller the dowry, Menon explains. That's appealing to farmers who may face crop failure and other families experiencing economic difficulties.

Then there are the regional customs that perpetuate child marriage. A ritual called Mausar dictates that when an elderly relative dies, all the children of the household must be married off within 13 days of the death as an act of ritual purification.

Menon also commonly hears that if a girl marries early, she has a husband who can protect her from sexual assault and abuse. Also, she adds, "Even though everyone knows the legal marriage age, in reality, as soon as girl hits puberty, she is [considered] ready for adult roles and responsibility which includes marriage."

According to the last Census, between 2002 and 2011, 20 percent of the female population in India — 15.3 million girls — were married before they reached the age of 18.
Why is child marriages still prevalent despite being illegal? #childmarriage #illegal #crime

Why do some areas show a decline and others not? The state of Bihar offers insights into what kind of efforts can bring down the rate of child marriage.

In the fall of 2016, the state government made it a policy to end child marriage. The nonprofit group Breakthrough, along with UNICEF, was instrumental in designing the campaign strategy. Their multipronged approach makes use of the media, with prime-time TV spots and radio jingles that address familiar refrains that justify child marriage. In one television ad, two men sit on the floor in a starkly furnished hut. One tells the other: "From the beginning our daughters are someone else's property. How long can we be expected to look after someone else's investment? Get her married at the age of 10 to 12, and your job is done." Then he lists all the reasons this is a good idea. The rest of the commercial refutes these assertions – pointedly noting that a lower age of marriage is strongly linked to premature death from early childbirth.

Along with all these messages, Breakthrough meets with families so its staff can gain a better understanding of the cultural practices that support child marriage and address the reservations about waiting until a girl turns 18 for her to wed. Breakthrough also educates government employees, village teachers and social workers, whom they believe are influential figures, so they can talk with families about the consequences of child marriage.

But obstacles to ending the practice still loom. Sriram adds, "Enforcement is not the only factor." Menon agrees: The fear of punishment is far smaller than the fear of breaking with social norms, and they believe their approach is working to fix that. "Based on our evaluation and surveys, what UNICEF data is saying checks out. We've seen change."

Menon says, "We work on preventative measures. It's showing some promise." When Breakthrough staff visited schools five years ago, she says, roughly half of the 12- to 16-year-olds sported red and white bangles, a mark of being married. "Over the last five years, that number has shifted down, and I can see it."

The big takeaway, according to Sriram of UNICEF, is that, "We need to accelerate this decline. It's not acceptable that 1.5 million underage girls [in India] are still getting married each year. We need political and governmental commitment to make the change happen."

In Rajasthan, Bharti agrees: A lot more still remains to be done to end what she calls "the virus of child marriage that infects families."

But Sriram argues for caution. Groups that seek to end child marriage don't quite know what preventive measures are working, she says. And then they have to figure out how to scale up the successful efforts. "We got the raw data just last month, we have to do a lot more analysis. I think there will be more questions than answers, but it will be fascinating."

The Loopholes That Allow Child Marriage In The U.S.