Accessibility links
Invisibilia: Inspired By 'American Idol,' A Reality Show In Somalia Aimed To Change The Real World : Goats and Soda Reality TV is popular around the world. It's also roundly mocked as formulaic and contrived. But can that kind of fragile fantasy meaningfully influence the real world? 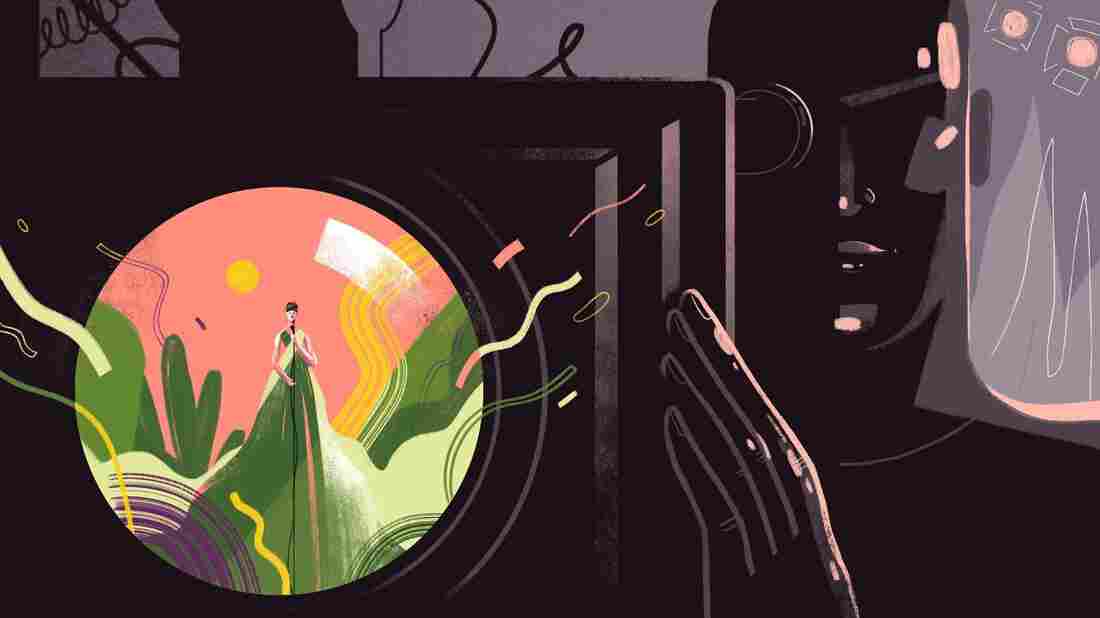 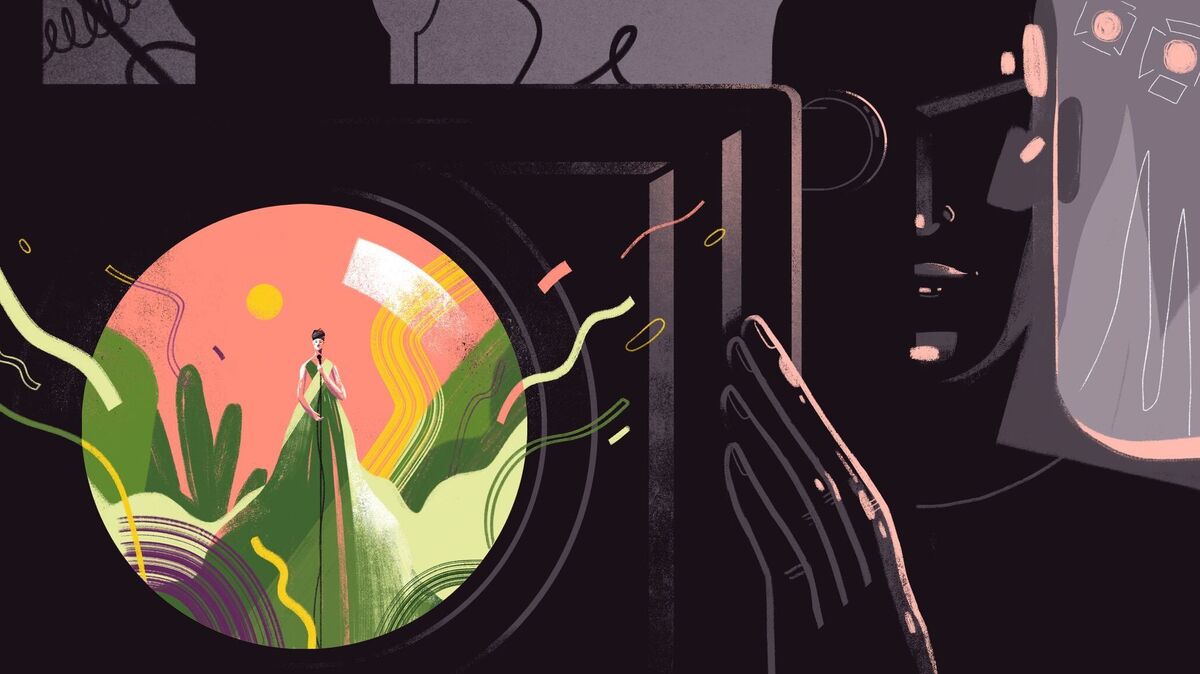 Welcome to Invisibilia Season 4! The NPR program and podcast explores the invisible forces that shape human behavior, and we here at Goats and Soda are joining in for the podcast's look at how a reality show in Somalia tried to do far more than crown a winning singer. The ultimate goal: to change human behavior.

Once upon a time there was music in Somalia, but then the music started fading out. First one music radio station, then another, then another, until there was almost no music to hear and people started MacGyvering workarounds.

One of the people who came up with a workaround was Xawa Abdi Hassan, a young woman who lived in a village outside Mogadishu.

"We used to use a memory card, fill the memory card with music and listen to it from our phones," Xawa says. In her house, as she cooked and cleaned, Hassan would sing along with the great Somali singers. But even in this private space she says she was careful. "I used to turn the volume down low, so no one could hear it."

The problem was al-Shabab, the Islamic extremist group that dominated large parts of the country. Al-Shabab didn't like music. In 2009 it banned music at weddings, banished musical ringtones and starting punishing people who listened to music on their mobile phones by making them swallow their memory cards.

Eventually the musicians themselves were targeted. The famous soloist Aden Hasan Salad was shot and killed in a tea shop, and others were murdered in the street.

Through all of that, Xawa Abdi Hassan kept listening and practicing. Because she had a dream: "I just wanted to sing and become an entertainer."

For most of her life though — because of al-Shabab — this was a pretty far-fetched dream. Then in 2013 an unexpected and interesting opportunity emerged: There was going to be a new reality television show in Somalia, an American Idol-style show with singers competing.

"As soon as I heard about it I knew I wanted to join," Hassan says.

What she didn't know — what she couldn't possibly know — was that this reality show was part of a much larger political plan.

The plan was to create a musical reality show that could undermine the power of al-Shabab, or, in the language of the memo distributed to the people involved in the show's creation, "undercut the messaging and brand appeal of armed extremist groups."

The United Nations, which was providing the money and support for the show, had concluded that a vivid display of Somali musical culture could serve "as a kind of inoculation against the austerity of Shabab," Ben Parker told me. Parker was the head of communications for the U.N. in Mogadishu. He says that at this point — 2013 — al-Shabab had finally been pushed out of the capital, Mogadishu. But the situation in Somalia was far from stable. There were still regular attacks, so the new government (which had U.N. backing) needed to prove to Somalis that the power of the extremist group really was fading. This is why, Parker says, a musical reality show that challenged the power of the music-hating group was so appealing.

"The beauty of a reality show is that the form itself achieves some of your goals," he explains.

After all, not only is there music in a musical reality show, there's democratic voting and individual expression. So even in its form it communicates to its audience a very different way of being.

This kind of indirect political messaging, Parker told me, is increasingly popular in strategic communications: "Those working in conflict ... are less and less convinced of the value of weapons and more and more convinced that other approaches can deliver the dividends."

You get further with songs than with bombs.

So is he right?

It turns out this question has been systematically studied.

How do people come to see the world around them as normal, an unremarkable fact, the way things are and should be? This is the question that interests Betsy Levy Paluck, a psychologist at Princeton University who studies media and how societies change.

Paluck told me that for a long time people assumed the path to political or cultural change depended on crafting the right argument.

"It was all rhetoric and no poetics," she says.

But starting in the 1990s, according to Paluck, poetics started gaining ground because psychologists realized that people consumed stories in this qualitatively different way.

"Their defensiveness is disabled. Their counterarguing is at rest."

What Paluck wanted to understand was whether this difference in how we consumed stories translated into any changes in what we thought and how we behaved. So around 2004 she hooked up with an organization in Rwanda that was creating a new radio soap opera that was trying encourage tolerance between different ethnicities.

And what Paluck found after a year of studying communities in Rwanda randomly assigned to listen to the soap opera was that their exposure had a surprising impact.

"What it boiled down to was that despite the fact that people loved this program, it didn't change their beliefs," she says. "But it did change their perceptions of norms, and at the same time it changed their behaviors. Which is why I thought this is something significant."

Let me repeat that: It didn't change their beliefs; it changed their behaviors by changing what they considered to be the social norm.

"It's a very uncomfortable thought," Paluck says. "We like to think that all of our behaviors flow from our convictions, and what we do is a reflection of who we are and what we think. But we're constantly tuning ourselves to fit in with the social world around us."

So what this work suggests is that if you change someone's perception of what constitutes the social norm — as you convince people that the world is safe enough to sing in public even though in actual fact singing in public is incredibly dangerous — then you just might be able to move the needle on the ground.

She took on extremists with her song

Which brings us back to Xawa Abdi Hassan, the young woman who quietly listened to music off a memory card and dreamed of being a singer.

It took her some time to convince her family that it would be OK to compete in the show, called Inspire Somalia. Her mother was afraid that participating would turn her into a target, but ultimately she got permission.

Hassan says when she first took the stage to compete, her hands were shaking, and not just because this could be a big break. There was another reason: Because of al-Shabab, she had never sung in public before.

It was too dangerous.

"That was my first time," she says. "Before that, I did not sing in public places."

After Hassan two other contestants had their turns, both men. One had a famous musician father; the second, a man named Mustafa, had composed his own song.

Once they finished came the part of the show supposed to serve as a democracy demonstration: the voting. Ballots were distributed to the audience and judges, and for a minute the room was quiet. In this small conference room in the middle of Mogadishu people bent over their ballots and considered the options before them.

The son of the famous musician.

The girl who practiced at home with the volume turned low.

The boy who wrote his own song.

In that room they consulted their hearts, weighed strengths and weaknesses, then marked the paper in their laps.

It was Mustafa who ended up winning, but Hassan says she was honestly not upset. For her just the act of singing in public for the first time was enough. "I was happy as ... like I was born that day." she told me.

In fact, Hassan is now a bit famous. People occasionally recognize her on the street, and even more important, she's part of a professional singing group. As al-Shabab remains a force in Somalia, this means she is still at risk. She says she tries not to worry too much but is often spooked when she sees a car slow down when she's walking. Still, she is committed to keep making music.

"Yes, it is dangerous," Hassan says. "But if the young person doesn't stand up for his country and do what's right, how is he helping his country?"

Which brings us to this question: Did this reality show actually change reality in any way?

It would be impossible to make the case that Somalia is a completely different country now. It isn't.

But there is at least one undeniable change since 2013. Music is back in the streets. Brought back, slowly and painfully, through a complicated combination of political strategy and personal courage.