Accessibility links
VIDEO: How A Tick Digs Its Hooks Into You. And Then: How Do You Get It Out? : Goats and Soda See how a tick sinks its hooks into a human for a long meal. And find out the best way to remove it.

Spring is here. Unfortunately for hikers and picnickers enjoying the warmer weather, the new season is prime time for ticks, which can transmit bacteria that cause Lyme disease.

How they latch on — and stay on — is a feat of engineering that scientists have been piecing together. Once you know how a tick's mouth works, you understand why it's impossible to simply flick a tick. 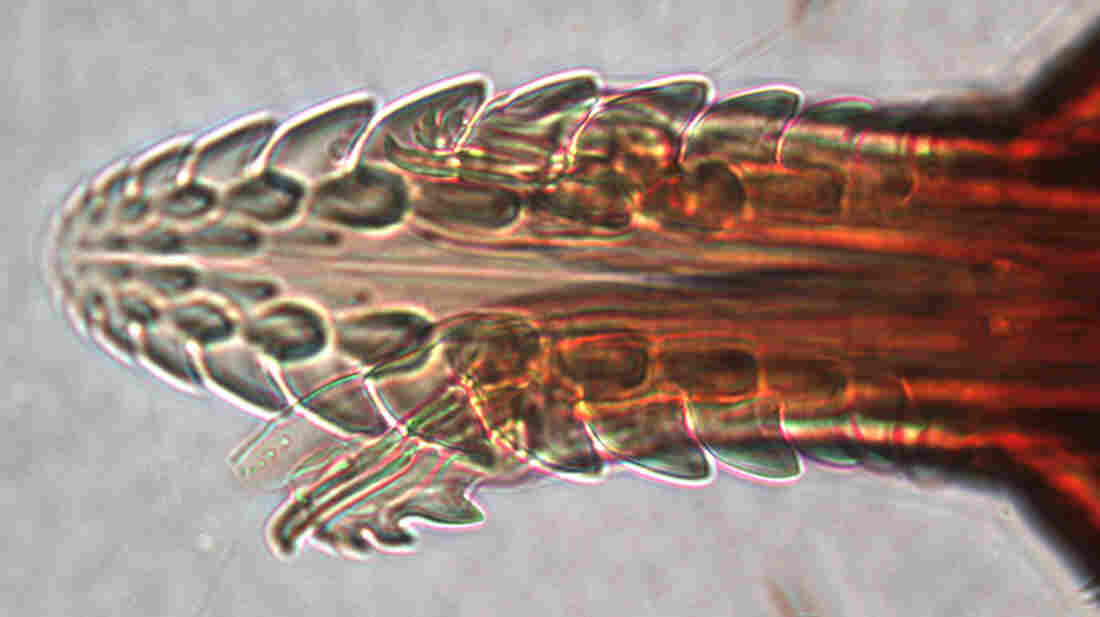 A tick's mouth is covered in hooks that help it dig into the skin and stay attached for several days. This young tick's mouth was photographed under the microscope at San Francisco State University. Annette Chan/KQED hide caption

The key to their success is a menacing mouth covered in hooks that they use to get under the surface of our skin and attach themselves for several days while they fatten up on our blood.

"Ticks have a lovely, evolved mouth part for doing exactly what they need to do, which is extended feeding," said Kerry Padgett, supervising public health biologist at the California Department of Public Health in Richmond. "They're not like a mosquito that can just put their mouth parts in and out nicely, like a hypodermic needle."

Instead, a tick digs in using two sets of hooks. Each set looks like a hand with three hooked fingers. The hooks dig in and wriggle into the skin. Then these "hands" bend in unison to perform approximately half-a-dozen breaststrokes that pull skin out of the way so the tick can push in a long stubby mouth part called the hypostome.

"It's almost like swimming into the skin," says Dania Richter, a biologist at the Technische Universität Braunschweig, Germany, who has studied the mechanism closely. "By bending the hooks it's engaging the skin. It's pulling the skin when it retracts." 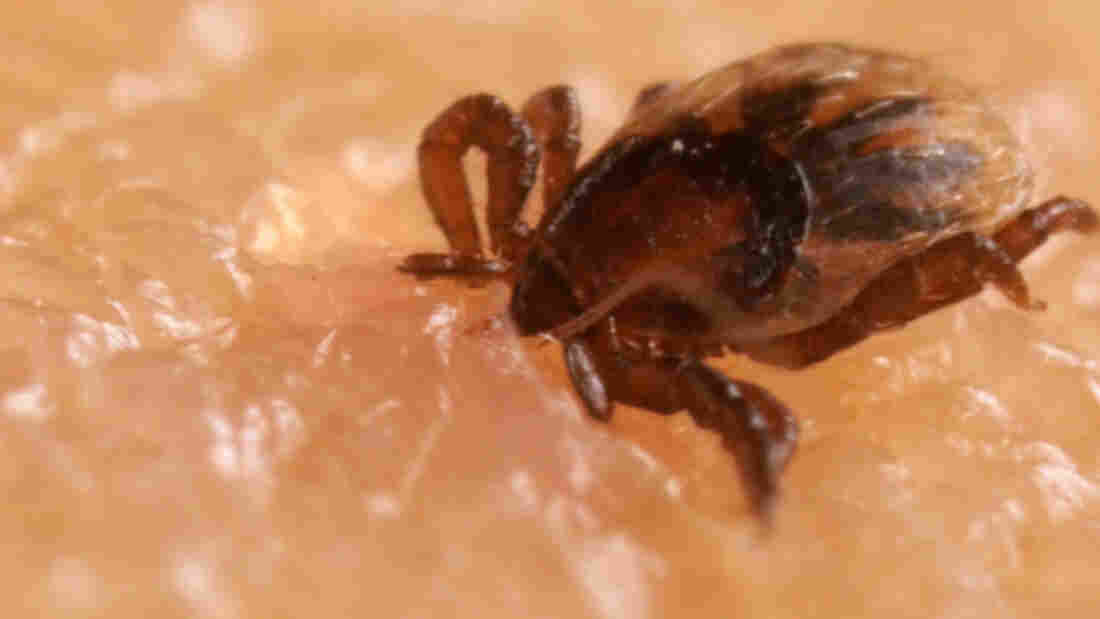 A tick nymph, or young tick, has dug its mouth into a human arm. Left to its own devices, this western blacklegged tick nymph will stay attached for three to four days, during which time it will drink enough blood to later molt and grow into an adult. Josh Cassidy/KQED hide caption 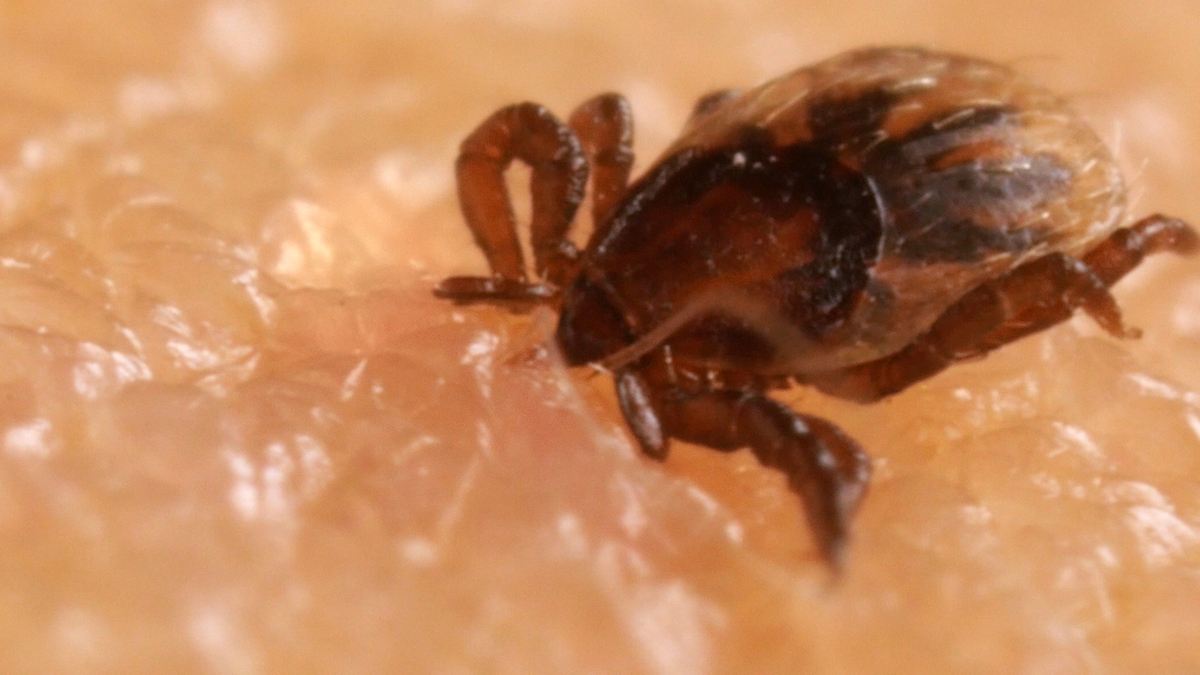 A tick nymph, or young tick, has dug its mouth into a human arm. Left to its own devices, this western blacklegged tick nymph will stay attached for three to four days, during which time it will drink enough blood to later molt and grow into an adult.

The bottom of the hypostome is also covered in rows of hooks that give it the look of a chainsaw. Those hooks act like mini-harpoons, anchoring the tick to us for the long haul.

"They're teeth that are backward facing, similar to one of those gates you would drive over but you're not allowed to back up or else you'd puncture your tires," says Padgett.

Compounds in ticks' saliva help blood pool under the surface of our skin. Ticks sip it, like drinking from a straw.

Ticks need to stay firmly attached because they're going in for a meal that can last three to 10 days, depending on whether they're young ticks or adult females. Compare that to a speedy mosquito, which digs into human skin, sucks blood and leaves, all within seconds.

For ticks, the stakes are high because instead of taking small meals they need to gorge themselves each time. A western blacklegged tick, the species that transmits Lyme bacteria to humans along the Pacific coast, lives three years. But in that time it only eats three huge meals, each one necessary for it to grow to its next life stage. It needs enough blood to grow from larva to nymph, nymph to adult and then for females to lay their eggs.

An adult female tick drinks so much blood during its one meal that its weight increases 200 times, said Richter.

So what's the best way to get rid of a tick?

The hooks that make these infrequent but long, banquets possible are what make it hard to pull a tick out. But it's not as hard as you might think. Padgett recommends grabbing the tick close to the skin using a pair of fine tweezers and simply pulling straight up.

"No twisting or jerking," she says. "Use a smooth motion pulling up."

Padgett warned against other strategies.

"Don't use Vaseline or try to burn the tick or use a cotton swab soaked in soft soap or any of these other techniques that might take a little longer or might not work," she says. "You really want to remove the tick as soon as possible."

Time is of the essence. If an infected tick bites humans, it takes at least 24 hours before Lyme bacteria start swimming out in the saliva the tick drips into its host.

So don't worry if the tick's mouth parts — the ones covered in those tenacious hooks — stay behind when you pull.

"The mouth parts are not going to transmit disease to people," says Padgett.

Once the tick's body is no longer attached, it can't transmit bacteria. And if the mouth stayed behind in your skin, it will eventually work its way out, sort of like a splinter does, she says.

In California, adult ticks carry Lyme bacteria less often than nymphs because of a biological quirk in the region. Ticks that carry Lyme bacteria and feed on the western fence lizard lose their infection in the process. The lizard's blood actually clears the infection, said Andrea Swei, who studies ticks and disease transmission at San Francisco State University.

Ticks most commonly feed on the lizards when they're larvae and nymphs. If a nymph was infected before it fed on a lizard, it will no longer be infected after it grows into an adult.

Experts say a key way to avoid tick bites is to be prepared. Wear long pants and put on repellent next time you're planning a hike or picnic in an area where ticks and their impressive hooks may be lurking.

This post and video were produced by our friends at Deep Look<https://www.youtube.com/channel/UC-3SbfTPJsL8fJAPKiVqBLg?sub_confirmation=1>, a wildlife video series from KQED<http://www.kqed.org/> and PBS Digital Studios<http://www.pbs.org/show/pbs-digital-studios/> that explores "the unseen at the very edge of our visible world." KQED's Gabriela Quirós<http://ww2.kqed.org/science/author/gabriela-quiros/> is the coordinating producer of the series. You can read a longer version of her post (https://www.kqed.org/science/1920972/how-ticks-dig-in-with-a-mouth-full-of-hooks) on the Deep Look website.