Accessibility links
'The Vagina Monologues' Was Performed For The First Time In Conservative Myanmar : Goats and Soda Right up to the opening curtain, organizers of the performance weren't sure that the play would be welcome in their very conservative country. 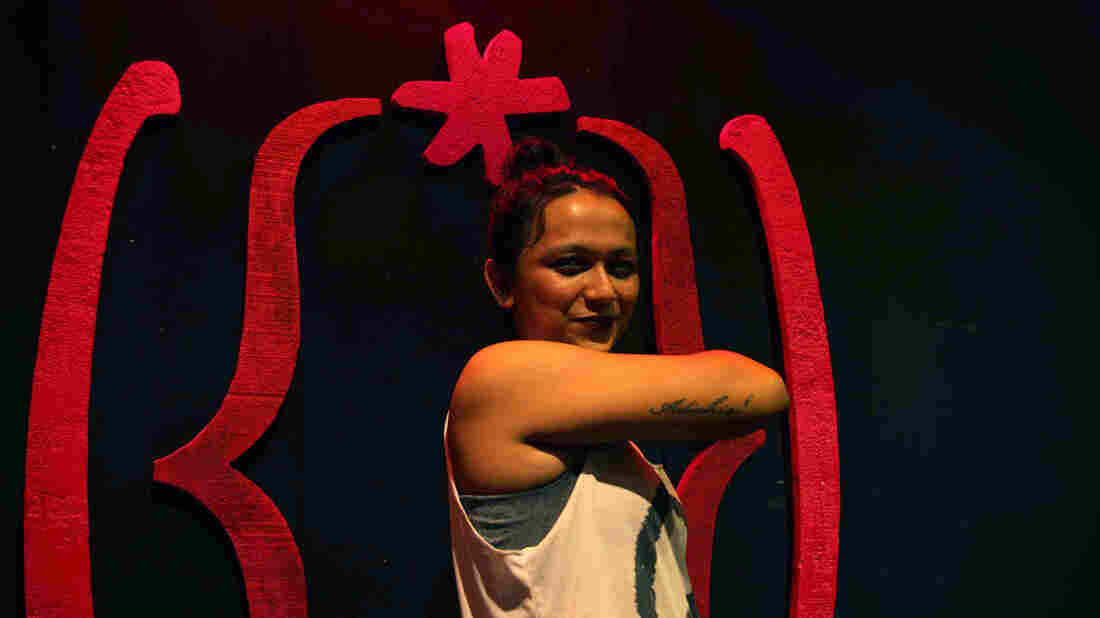 Nandar was one of the organizers â and participants â in the staging of 'The Vagina Monologues." Libby Hogan for NPR hide caption 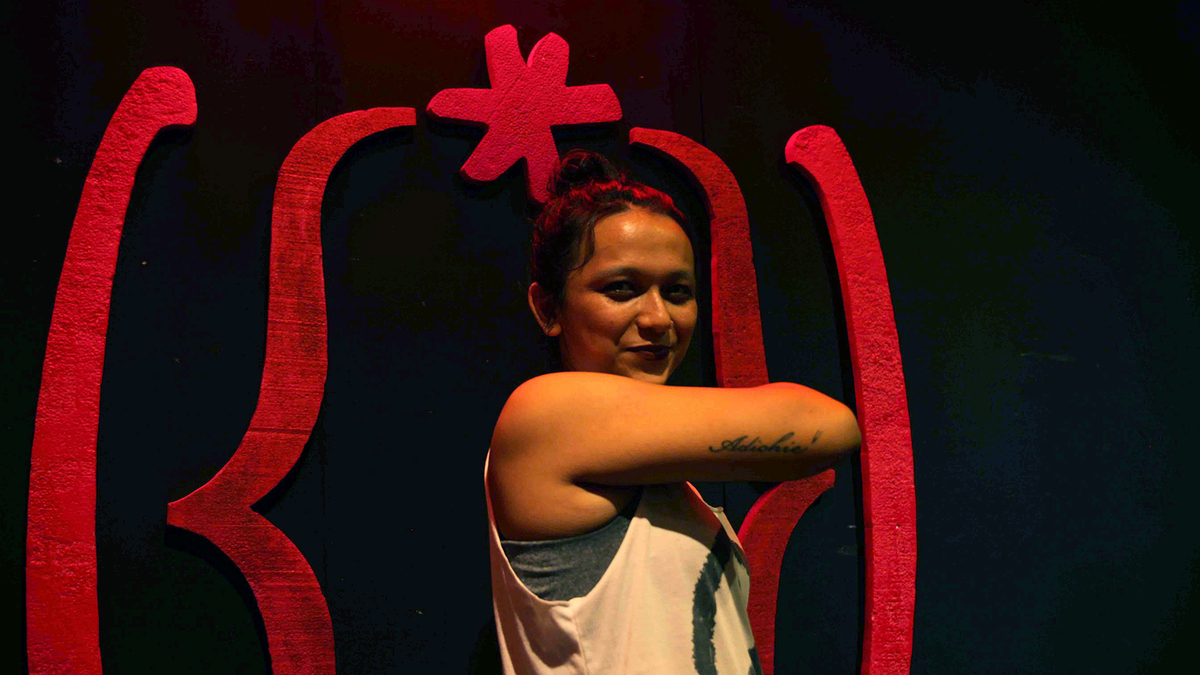 Nandar was one of the organizers â and participants â in the staging of 'The Vagina Monologues."

Last weekend The Vagina Monologues was performed for the first time in Myanmar. Audiences loved it. Each performance was filled to capacity.

But right up to the opening curtain of the free event, organizers worried that the country might not be ready for a politicized play about female genitalia and empowerment. After all, when they called a sweet shop in Yangon, the country's largest city, and asked for a culinary tie-in — vagina-shaped lollipops — the proprietor hung up.

Fortunately, their next attempt went a little better. When they called a bakery to request the vaginal symbol — [{*}] — on cupcakes, the woman who answered the phone cut to the chase.

"So basically in the shape of a vagina, no?" said the baker, Ei Thet.

Ei Thet says she'd never had a request like that before but was happy to give it a try.

Her openness helped put their minds at ease. Perhaps the locals were ready for the play.

Last weekend, 26 women — from Myanmar and abroad — performed the series of monologues about vaginas. And the vagina-shaped cupcakes sold out.

The Vagina Monologues was written in 1994 by American playwright and activist Eve Ensler. On Valentine's Day 1998, she broadened it into a global campaign called V-Day. Each February, to encourage women around the world to perform the work, Ensler suspends the play's copyright. This year, she extended that status through March.

Taking the play international has helped spotlight its universal appeal — even in Myanmar, one of the world's most conservative countries.

"We still can't talk about the vagina," says Nandar, a 23-year-old feminist and one of the event's organizers. Nandar, who goes by one name, read the play's monologue "My Angry Vagina." It's a rant about how society feels the need to create products to clean and perfume vaginas, explains Nandar, "even though it is part of a woman's body, something that gave birth to all of us."

After growing up in a village in Shan state — where women aren't allowed to touch men, wash their hair or leave the house if they are menstruating — Nandar says she hopes these monologues will hold up a mirror to some of the discriminatory beliefs and negative attitudes perpetuated in her homeland.

Nandar helped Irena Grizelj, a consultant for a peace-building agency and the primary organizer of the event, set up the show. Irena Grizelj says she was inspired after watching a diverse group of women in Myanmar begin a frank discussion about the play's themes, using the monologues as a starting point: "The whole point of The Vagina Monologues is to stir up a discussion. The title itself makes you talk! The monologues are bold, provocative, subtle and funny."

Besides, says Nandar, "We were told our vaginas are dirty, not to touch. That's such bulls**t."

Before the play debuted in Yangon, organizers weren't the only ones who were nervous. Several performers weren't sure if the timing was right for such a controversial play.

"I was excited to hear that this would be on in Myanmar but also a bit nervous about the reaction from the public," says 24-year-old Evelyn Yu Yu Swe, a DJ and founder of Myanmar's Women's Self Defence Centre. Over the past two years, her team of nine trainers has taught more than 400 women.

A man was moved

Actually, this wasn't the first time the Vagina Monologues has had an impact in Myanmar. Two years ago, a writer named Moe Thet Han found the text online and was drawn to its audacious title. He was especially moved by the monologue "My Vagina Was My Village" — an eerily poetic verse in which a woman recounts her wartime rape and compares it to the destruction of a village.

He decided to translate the monologue and wrote an article about its power for Rainfall, a feminist magazine. He says he was the first in Myanmar to write about The Vagina Monologues.

And the some of the themes of the play are topics of current discussion. On March 8, International Women's Day, the Karen Women Organisation (KWO) called out the army's reported use of rape against minorities — and called for the perpetrators to be brought to justice.

"Their time is up," said a statement from KWO, which represents the Karen people of southern Myanmar. "No woman from Burma of any background should experience these attacks — not the Rohingya, not the Shan, not the Kachin, not the Karen."

For many here, this kind of thinking is long overdue.

A Karen woman named Zoncy, who performed the "My Vagina Was My Village" monologue, says that "vagina discussion has never happened in my life — even with my mum or sisters or friends. I feel like I am free now."

In an impromptu Q&A after the last show, on March 24, a performer named Thinn Thinn spoke about her experience reading "They Beat the Girl Out of My Boy." The monologue describes the life of a transgender person. For Thinn Thinn, who isn't transgender herself, this was the first time she reflected on the treatment of transgender people in Myanmar. She spoke to the audience about the perspective she gained.

Audiences who saw the play in Yangon this year received a program that summarized each monologue in the Myanmar language. Due to time constraints, only two of the monologues — "My Vagina Was My Village" and "My Short Skirt" — were fully translated. (Moe Thet Han was one of the two translators working on the project.)

Given the play's popularity, some are discussing the possibility of translating all of the monologues next year.

"I hope this performance of 'The Vagina Monologues' will help inspire conversations around women's sexuality," says Evelyn Yu Yu Swe. She hopes those conversations won't be confined to "women's sexual experience through the clinical lens of 'reproductive health.' [I hope we can] really start to talk about women's sexual lives, sexual pleasure, all the other aspects of sexuality that affect women beyond periods, menstruation and reproduction."

Nandar agrees. The first performances weren't perfect, she concedes. But they were a first step.

They were also a way to bring a sense of humor to a serious subject.

A doctor named Thet Su Htwe, who founded a group called Strong Flowers to teach about reproductive health, family planning and relationships, would close each night's performance by sharing some of the names that people use for "vagina" in Myanmar. When she said that some refer to it as a "samosa" — in Myanmar, those are salty potato-and-onion pastries — the audience erupted in laughter.

Libby Hogan is a multimedia journalist based in Myanmar. She covers women's issues, ethnic minorities and the environment. Tweet her @libbyhogan