Accessibility links
Scientists Finger Bats For Spreading Virus That Killed 24,000 Piglets In China : Goats and Soda At first, tests were positive for porcine epidemic diarrhea virus. Then something strange happened. The pigs stopped testing positive for that virus — but kept getting sick. 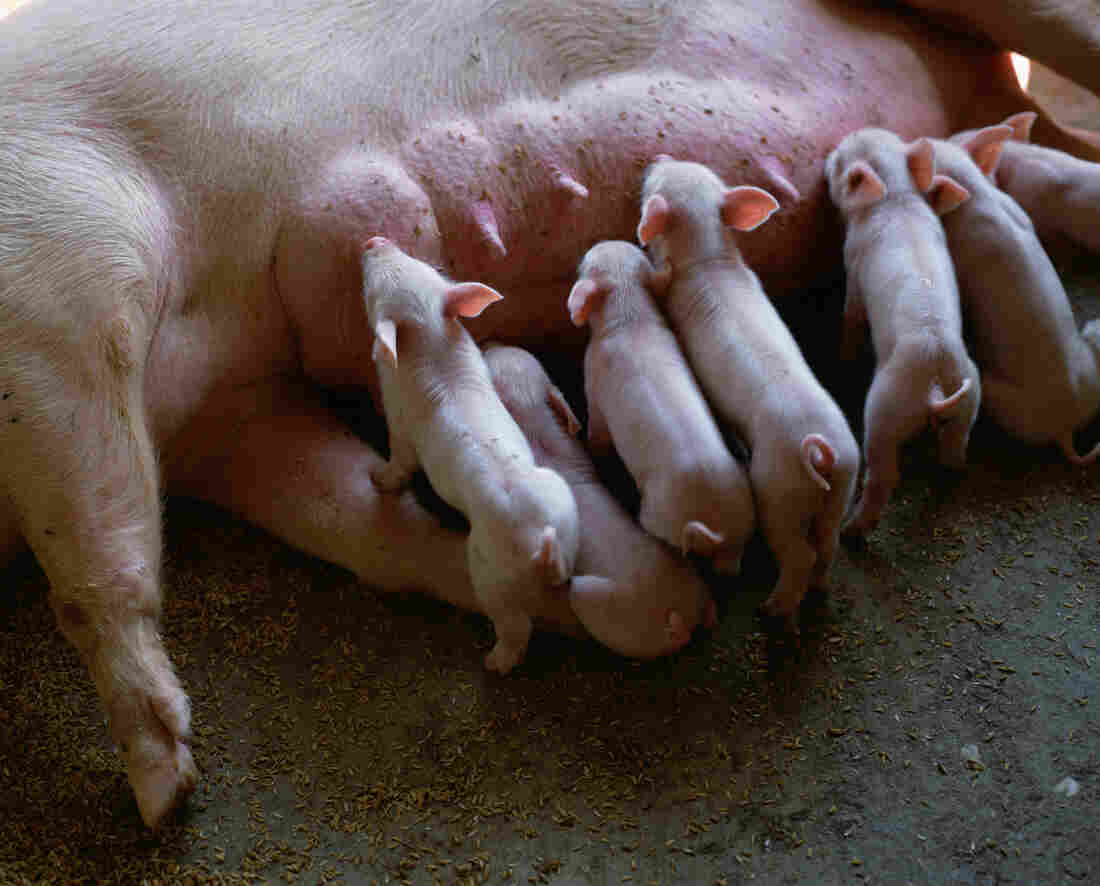 Piglets suckling on a farm in Guangdong province in southeast China, where the virus struck. xPacifica /Getty Images hide caption 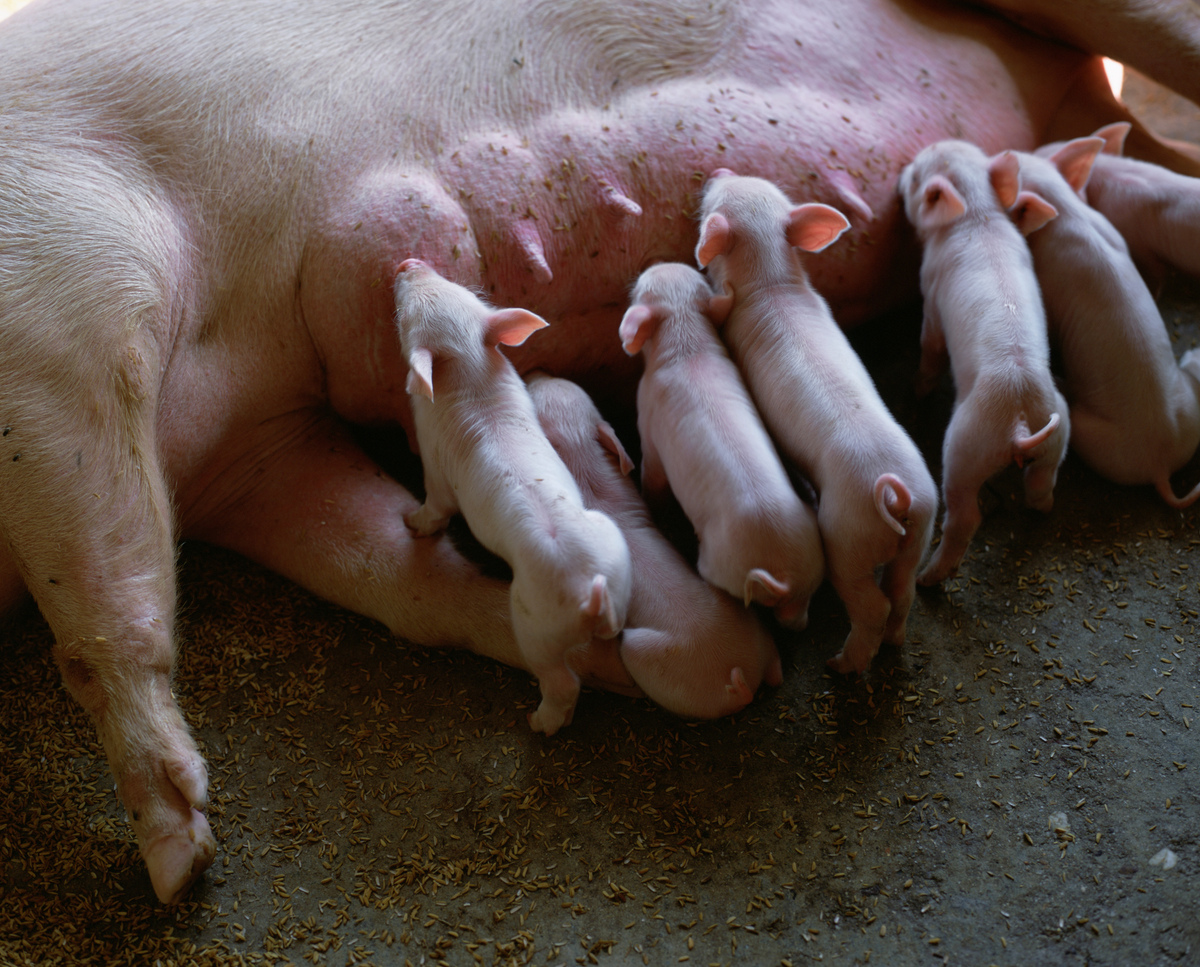 Piglets suckling on a farm in Guangdong province in southeast China, where the virus struck.

When the newborn piglets first started getting sick in October 2016, farmers in China's Guangdong province suspected porcine epidemic diarrhea virus (PEDV) — a disease they'd seen in the pigs before. And, at first, the tests did come back positive for PEDV. But then something strange happened. By January 2017, the pigs stopped testing positive for that virus — but kept getting sick.

Researchers began looking for another cause of the piglets' illness. The four farms where the pigs were dying were located about 60 miles from Foshan — the place where severe acute respiratory syndrome (SARS), first emerged back in 2002. Before it was halted in 2004, SARS spread to 33 countries and sickened more than 8,000 people, killing 774.

Once researchers got this new virus under the microscope, they confirmed that it was a virus in the same family as both PEDV and SARS — but it wasn't one they'd seen before. It was a brand-new disease. They named it SADS, or swine acute diarrhea syndrome. It had infected the piglets during an outbreak of PEDV, and then it rapidly took over; by May 2017, more than 24,000 piglets had died.

Researchers tested the workers who had come in close contact with the infected pigs and were relieved to discover the virus was not transmissible to humans — this time.

These alphabet-soup viruses all belong to the same family: the coronavirus. Most coronaviruses are mild to moderate infections, but some types are severe and deadly. SARS is one such strain; another is MERS (Middle East respiratory syndrome), which was discovered in Saudi Arabia in 2012 and has since killed 640 people. The SADS virus in the Chinese pigs affected the gastrointestinal tract. SARS and MERS, on the other hand, are upper-respiratory infections. They are particularly frightening because they are usually spread by coughing or sneezing; they're airborne, which means they can disseminate easily and quickly. That's why they scare virologists more than Ebola. They're widely distributed, highly diverse, evolve rapidly and adapt easily to new hosts. And there are currently no vaccines against any coronavirus strains.

To The Bat Cave

In Guangdong province, the next step was finding out where the novel coronavirus had come from. The answer hangs upside-down and lives in caves: Bats.

Researchers compared SADS to samples that had been taken the year before in nearby bat caves. (Here's where the life a disease researcher can get a bit unusual: the samples came from swabbing the butts of bats.) They found that 9.8 percent of horseshoe bats in Guangdong were hosts to a very similar virus that had likely mutated during the spillover.

In a new study published by Nature on Wednesday, those researchers highlight the possibility of deadly coronavirus transmission from bats to domesticated animals and, in turn, to humans.

"Bats have been recognized as one of the most important reservoirs for emerging viruses," the researchers write. Bats don't just spread SARS and MERS; they can also harbor diseases like Ebola, Hendra, Marburg and Nipah, a virus in Southeast Asia that also spilled over from bats to pigs and then moved on to humans.

But predicting the next pandemic is tricky work.

Simon Anthony is a virologist at Columbia University in New York City and lead author of a 2017 study on bats as a major animal reservoir for coronaviruses around the world.

"It is very difficult to predict which virus will be the next to spill over into humans, and even harder to predict whether that virus will cause disease," he says. But, given the number of coronaviruses that have now spread from animals to people, he adds, "it seems a safe bet to think it will happen again. We just don't know which virus it will [be], where it will come from, or when."

Zoonotic viruses — diseases that spill over into new animal and human populations — occur as people and domesticated animals push up against previously isolated wildlife. Add to that the surge in factory farming, where thousands or even millions of animals live in tight quarters, and diseases can move through a herd swiftly.

Zhengli Shi, the principle investigator of emerging viruses at the Wuhan Institute of Virology and a co-author on the Nature report, says it appears that China is emerging as a hot spot for the detection of novel viruses.

"The increased farm factories disrupt the living niches of bats," she says, "thus increasing the contact chance between wildlife and domestic animals and the risk of diseases transmitted from wild animals."

China is not alone. Any country increasing agricultural intensification and land-use changes may also experience viral spillover and the rapid spread of new diseases.

"Monitoring bat populations can help people to understand how viruses are transmitted and which regions are at high risk of bat-borne diseases," she says. That knowledge, in turn, can inform prevention strategies.

"They give us a head start by identifying viruses with the genetic prerequisites for human infection, and viruses in areas where the ecological conditions might facilitate spillover," he says. "It's a very difficult thing to do, but it's surely better than just waiting for viruses to emerge one after the other."

Anthony adds an important concern: "Bats are super important!" he says. While they do carry zoonotic viruses, they are critical for a well-balanced ecosystem. For example: some bats eat mosquitoes, which also carry dangerous viruses like malaria, yellow fever, chikungunya, Zika and more.

"Culling bats because of fears they carry dangerous viruses is not the way forward – and this can actually have the opposite effect and increase transmission risk," Anthony cautions. "It appears that the rate of new zoonotic disease emergence is increasing, but these events are still rare."

In Guangdong, the disease struck newborn piglets the hardest. On one farm in February 2017 alone, 64 percent of all newborn piglets died. But once the farmers separated sick piglets and sows from the rest of the herd, the outbreak abated within a few months.

The bats in caves nearby, however, likely still harbor the virus — and other unknown coronaviruses — and they're still flying over farms at night.