Advice To Parachuting Docs: Think Before You Jump Into Poor Countries

Advice To Parachuting Docs: Think Before You Jump Into Poor Countries 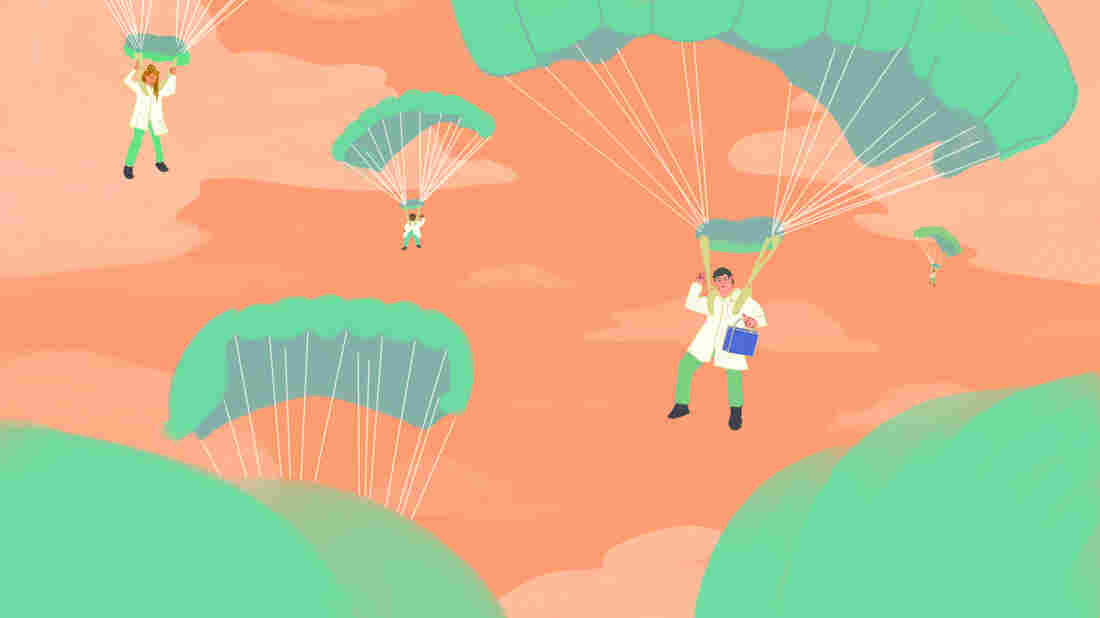 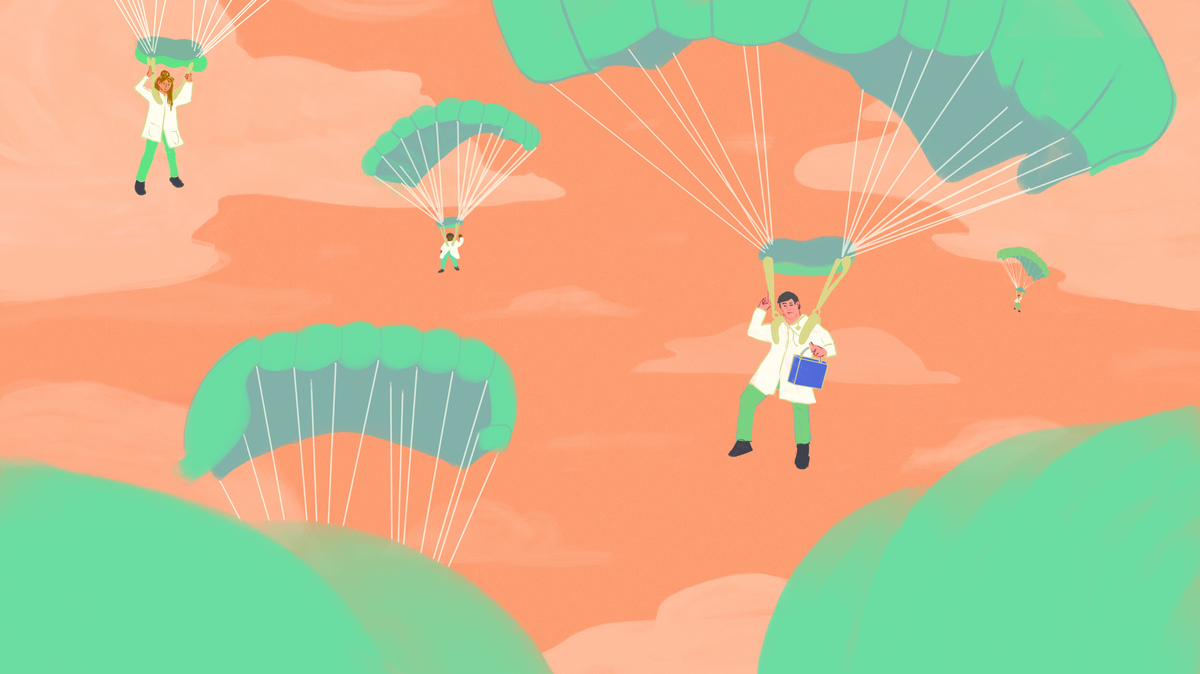 Don't mess with other civilizations.

That's the "prime directive" in Star Trek and countless other sci-fi works. Of course, visitors to other planets get it wrong — a lot. Sometimes, they meddle in inappropriate ways and disaster ensues.

So what does this have to do with global health?

Well, here on Earth, doctors and medical students are flocking to programs where they spend a couple of weeks to months volunteering in what's called a "low-resource" country. In these places, medical expertise and technology may lag behind richer nations.

And sometimes their eagerness to help can have unintended negative consequences.

Now the American College of Physicians has issued a position paper on "ethical obligations" for these medical volunteers, both doctors and students. Published in the Annals of Internal Medicine, the paper has been widely praised — but critics have also raised one major concern — no one from the developing world was part of the committee preparing the guidelines.

Why do we need guidelines? There have been versions before. But the fact that a major American medical group has put forth a position paper is significant.

And there are a lot of volunteers out there: Among medical students alone, about a quarter of them participate in a "global health experience," according to a survey by the Association of American Medical Colleges.

They are motivated by a desire to improve health care for underserved populations — and perhaps to build a resume for a future career in global health. The official name of the program is the "short-term clinical experience in global health" — which goes by the clunky acronym of STEGH.

In an interview with NPR, Khan made the connection between sci-fi ethics and medical ethics. The similarity between space explorers and medical mission docs, he says, is a "sense that I have something you don't have and I can help you because of that."

Only it doesn't always work out that way.

Perhaps a doctor performs a surgery, then goes home. The patient develops complications, and there's no local health-care worker who can help them.

Or maybe the visiting medical professionals offer free care that takes business away from local docs.

Medical students might want to try a surgery they wouldn't be able to do in the U.S. because they haven't had enough training.

Medications that are provided for these docs may be past their expiration date.

And students sometimes are oblivious to local customs — say, that women dress modestly or a physician should not touch a patient of the opposite sex.

The authors of the position paper seemed a bit oblivious in one way, as well. As the Annals of Internal Medicine notes in an editorial in the issue that published the paper: "We were perplexed and disappointed that no authors from low- and middle-income countries were included and no input from in-country collaborators was acknowledged."

"I think they are comprehensive and well-written and I do not hesitate to congratulate the team that has come up with it," says Dr. Bernard Olayo, a public health specialist who practices internal medicine in Nairobi, Kenya. "But they could have done a much better job if they had received input from physicians and institutions that receive such kinds of doctors."

"Any study about people in low-resource countries has to have people [from those countries] embedded from the beginning," says Dr. Keith Martin, head of the Consortium of Universities for Global Health.

Dr. Jack Ende, president of the American College of Physicians, acknowledges the omission: "I think in retrospective it would have been helpful to get that voice. We didn't do it."

That lack of input from doctors in developing countries is ironic because one of the big pushes in the guidelines is for collaboration.

Western medical institutions that send volunteers abroad need to have an attitude of "respectful partnership," the guidelines note: "Evidence of positive long-term health effects [from STEGH programs] has been lacking except in long-term, sustainable partnerships."

Dr. Olayo echoes that point: "If you're a physician coming in from Boston, you're most useful if you train their physicians rather than trying to see as many patients as you can in the six weeks you're there."

Doctors who've participated in and planned STEGH programs welcome a new set of guidelines from a leading medical organization. And they have a lot to say about the issue.

"Medical missions, if not conducted with the local community, represent another form of cultural colonialism," says Dr. Lawrence Loh, who is adjunct professor at the University of Toronto's Dalla Lana School of Public Health and who has researched and published widely over the past decade on the ethics of "short-term volunteering abroad." Regarding the problem of trainees overstepping their skill set, he notes, "The golden rule is if you can't do it in North America, you probably can't do it over there." He stresses the importance of having faculty overseeing medical student volunteers.

"We need to get away from the idea of parachuting into communities without consulting with local hospitals and clinicians," adds Loh.

"You're there as a well-trained expert who can do some good," agrees Ende of the American College of Physicians. "But you shouldn't be there to take over. You don't have all the answers."

That's the approach at Yale's School of Medicine, says Dr. Tracy Rabin, assistant director of the Office of Global Health. The medical school has a 12-year partnership with the Makerere University College of Health Sciences in Uganda. Doctors from Uganda spend times at Yale and vice versa. And they learn from each other. One area where the Ugandan docs surpass their American counterparts is "the nuances of physical exam," Rabin notes. In a high-income country, she explains, physicians can rely on abundant technology for tests and diagnosis. In Uganda, doctors sharpen their clinical skills because they don't have the luxury of a test being available — "which isn't to say," she adds," that my colleagues in Uganda wouldn't love to have more tests and diagnostics."

Volunteering Abroad? Read This Before You Post That Selfie

Rabin, who read and commented on the position paper before it was published, was glad to see that the paper talks about respecting the privacy of patients in developing countries. Western doctors volunteering in low-resource countries will "over and over" post a patient's photo on the internet and Facebook in a post about a case they've handled. "They're excited, they want to share experiences, but they're posting things online that should not be there without the permission of patients," she says. And even asking permission may not be satisfactory: A patient in a low-income country may agree to be photographed because of the "power differential" between local person and visiting physician, says Rabin. She proposes finding an existing photo in a textbook or framing a photo so the patient's face is not shown.

What about the dilemma of expired medications, which the paper raises?

"I remember working with an American physician who was using expired antibiotics," says Dr. Olayo of Kenya. "He told us these are very fine, very expensive medicines. He made a joke like, 'You know, the molecules in the medicine don't just decide on the expiration date — we're expiring!"

Olayo does not like that perspective. "For any patient, expired medicine can be perceived negatively, like dumping your waste on these poor people."

And let's say the out-of-date pills are part of an effort to address high blood pressure among community members. Take a step back, Dr. Khan suggests. "First figure out, is high blood pressure really the problem. If it is huge, talk about ways local people might come together. You might come up with salt reduction as a main intervention — although you might have to convince them that salt is a problem."

"In no scenario," he adds, "does a bottle of expired medicine play any role. Throw it away."

So where do we go from here?

"Implementation is necessary skill set to be honed in global health," says Dr. Adam Hoverman, a preventive medicine resident physician at Oregon Health and Sciences University and a member of the CUGH Global Health Workforce Committee.

These guidelines, and others that came before, should be part of the conversation in journals, in conferences and in curriculum, he says.

"They get the conversation started," says Hoverman, "and it's clear that further sets of principles can be included."

It's also clear that these guidelines apply beyond the world of medical mission docs.

Dr. Khan likes the way the paper describes the "general orientation abroad" for a STEGH volunteer.

The doctor should be "a humble visitor," the paper states.

And that's not just a STEGH thing.

"I think the era of the physicians as master and commander is over, and that's very good thing," says Dr. Khan. A physician in any setting is part of a team, he believes, and that team includes the patient.

His prime directive for all docs, including medical mission participants: "Listen to patients and don't assume anything."