Accessibility links
Dramatic Goat Rescue Operation For A Pair Stuck On A Beam Under A Bridge : Goats and Soda They were about 100 feet above the ground. They had been there for hours. And they didn't know how to get down. Operation Goat Rescue begins! 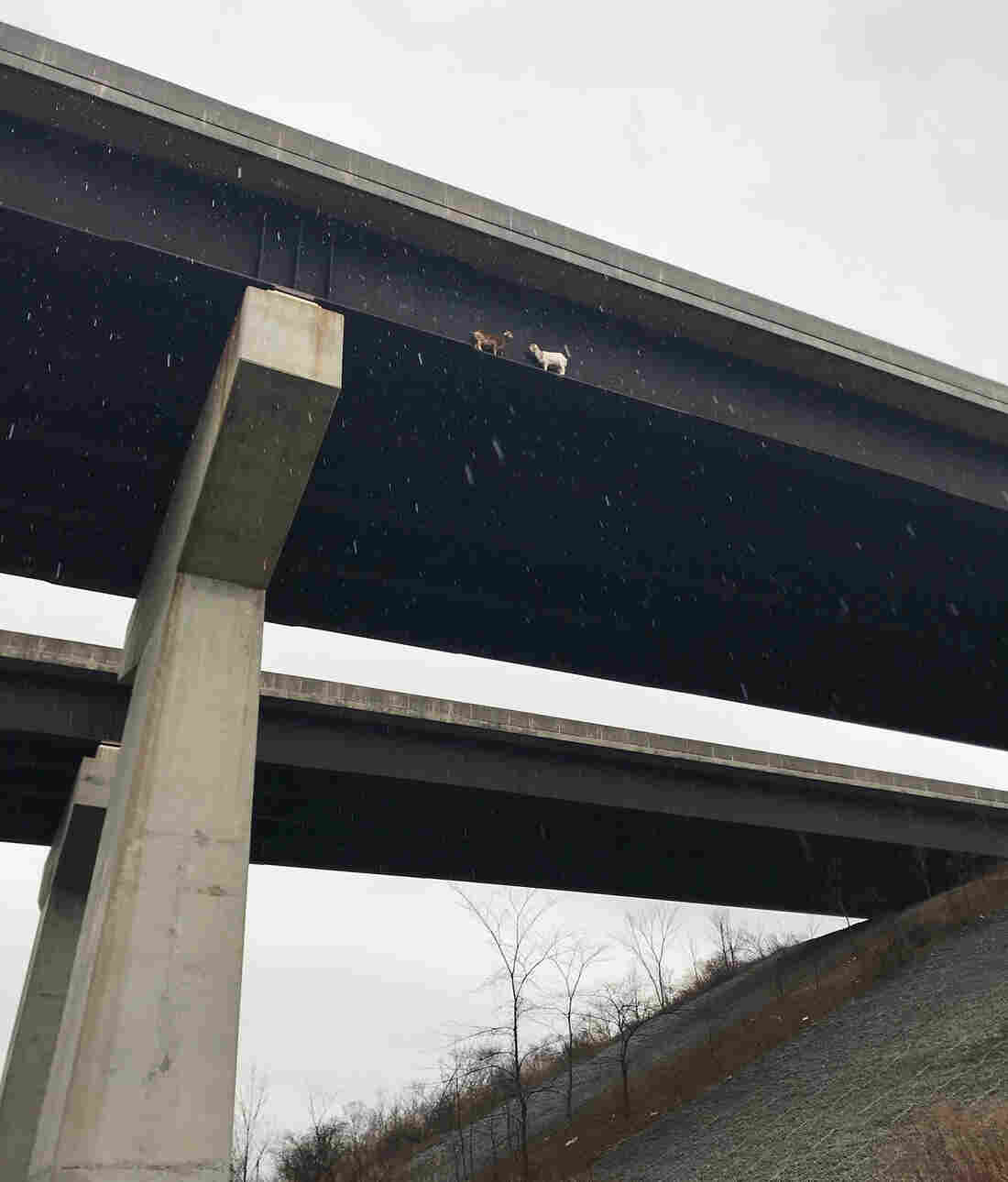 See that little brown critter and that little white critter? They're goats stuck on a bridge in western Pennsylvania. The white goat is facing in the wrong direction to walk off the beam, about 100 feet high, and return to solid ground. Todd Tilson/PA Turnpike Commission hide caption 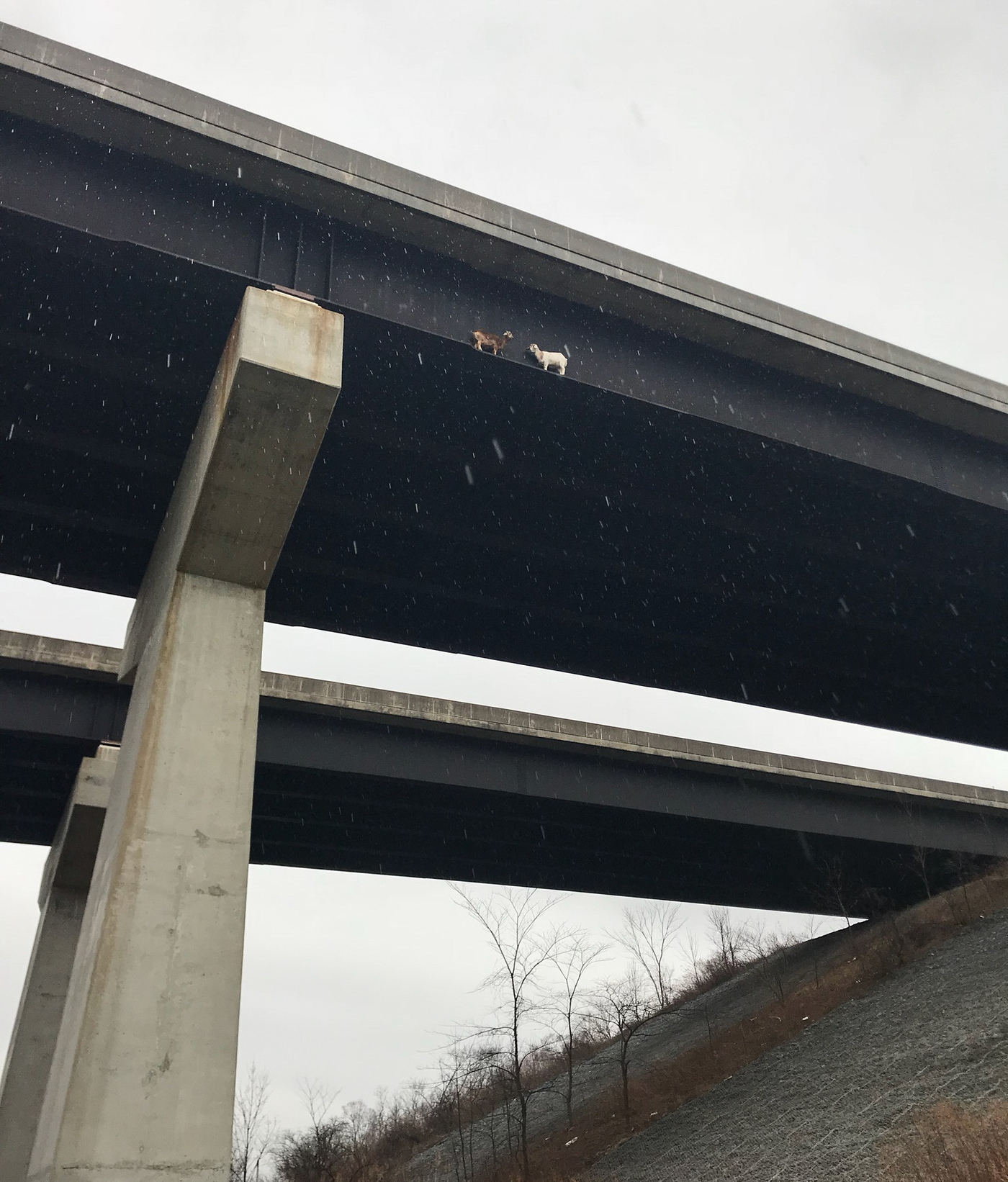 See that little brown critter and that little white critter? They're goats stuck on a bridge in western Pennsylvania. The white goat is facing in the wrong direction to walk off the beam, about 100 feet high, and return to solid ground.

From time to time, readers ask us, "How did your blog get its name?"

It's a longish story (here is the full explanation). In a nutshell, goats are a useful animal in the lower-income countries we cover. They can contribute to the income and the nutrition of a family.

We've also learned from talking to goat specialists that goats are curious and independent animals — true to the spirit of our blog, if we might humblebrag.

And because goats are in our DNA, we figure we have license to cover interesting stories about goats.

So when NPR listener Jason E. Farabaugh sent us a Facebook posting about two goats stuck on a beam under a Pennsylvania Turnpike bridge in rural western Pennsylvania, we jumped to it.

No one knows why the goats climbed up on the pedestal of a Mahoning River bridge and set out along a narrow beam.

They're not talking. But goats do love to climb and explore, notes goat specialist Susan Schoenian of the University of Maryland College of Agriculture and Natural Resources. So these two goats, who are probably pals (because goats are social animals), escaped from the nearby yard where they lived and went on an adventure.

They deftly walked along the beam with their very small feet. They proceeded about 200 feet. But it turns out they couldn't just keep on walking ahead — there was an obstacle that kept them from moving forward. So they had to turn around and head back the way they came.

The brown goat managed the trick. "He walked out to a concrete pier and somehow got himself turned around," says Todd Tilson, operations manager in the maintenance department of the Pennsylvania Turnpike.

The white goat did not manage to turn around.

That's why, in the photo, you'll see the two goats facing each other.

Tilson reports that the brown goat "kept hitting the white one with its head" to make it walk backward. "It would take one step, two steps back, then stop," he says.

And really, can you blame it? Would you want to walk backward on a beam that is about 8 inches wide and 100 feet above the ground? 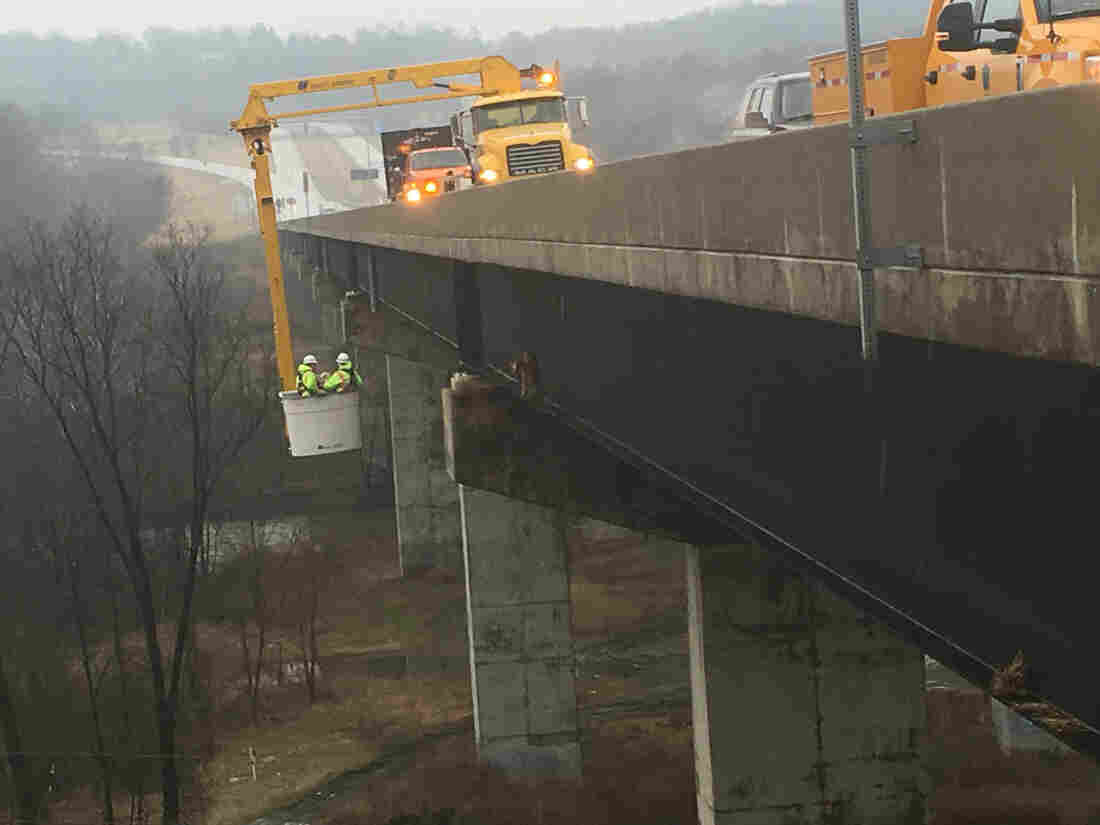 They call this kind of crane a "snooper crane." It is used for inspecting the underside of bridges but, in a pinch, can be a valuable tool for a goat extraction. Todd Tilson/PA Turnpike Commission hide caption 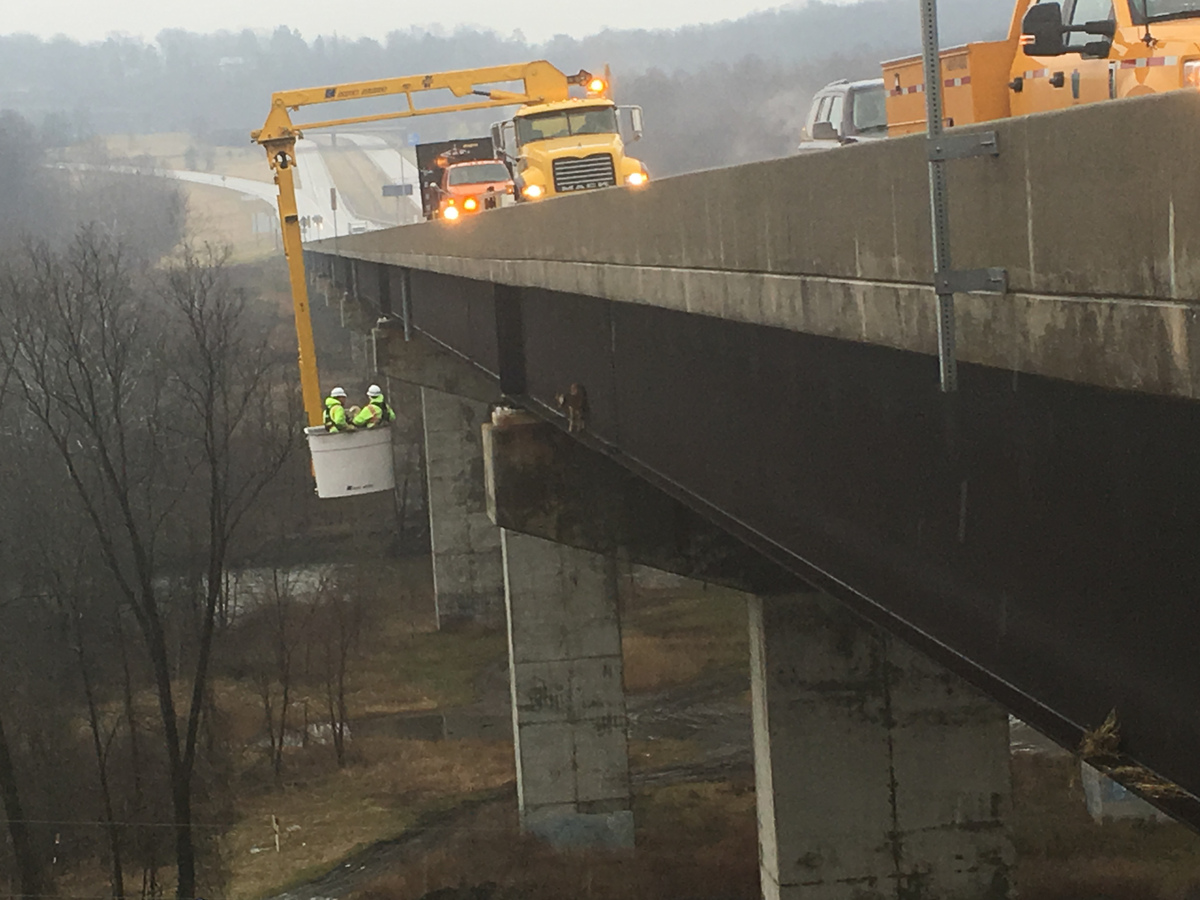 They call this kind of crane a "snooper crane." It is used for inspecting the underside of bridges but, in a pinch, can be a valuable tool for a goat extraction.

The goats weren't likely to leap off, conjectures Schoenian: "They're not going to jump. That's not part of their behavior to jump off of something. Their desire is to climb."

In their predicament, she sees similarities to human behavior: "Think of a child who climbs out there to explore and gets stuck and is too scared to go any further. And you just kind of shut down even if you could keep going."

The call about the stranded goats came into the Pennsylvania Turnpike at roughly 10 a.m. Tuesday. The son of the owner of the goats said they had been out there 18 hours already.

Clearly, a crane was needed. But the turnpike crane was in use, so the Pennsylvania Department of Transportation stepped in. Steve McCarthy, a civil engineer for bridge inspection with the department, was drafted for the rescue effort. "It was my first goat extraction," he says.

He and a colleague got in the bucket at the end of the long arm of the crane.

A happy ending wasn't guaranteed. "If they fall off the beam while we're trying to rescue them, it would feel like we did harm to them," Tilson says.

"The initial plan was to try and separate the goats so we could could grab the goat facing the wrong way and turn it around," McCarthy says. But the white goat wasn't cooperating.

The white goat was deposited on the bridge and handed over to its owner's son. McCarthy then tapped the beam with a pole to encourage the brown goat to make its way back.

Asked about the possible cost of the rescue, Tilson says, "We didn't even calculate it. We were just trying to be a good neighbor and get the goats back safely."

McCarthy is a happy man. "In this day and age, when things can go terribly wrong," he says, "it was great to see things go right."

His success is a testimony to a value that is sometimes lost in our quick-attention-span age: persistence.

Meanwhile, no word on how the goats are faring, but I'm sure they would agree with a classic proverb from Rabbi Nachman of Bratslav: "The whole world is a very narrow bridge; the important thing is not to be afraid."