Accessibility links
Could You Fight Off Worms? Depends on Your Gut Microbes : Goats and Soda Nearly 25 percent of people are infected with worms. New research suggests that gut microbes may be able to help in waging war against the parasites.

Could You Fight Off Worms? Depends On Your Gut Microbes

Could You Fight Off Worms? Depends On Your Gut Microbes 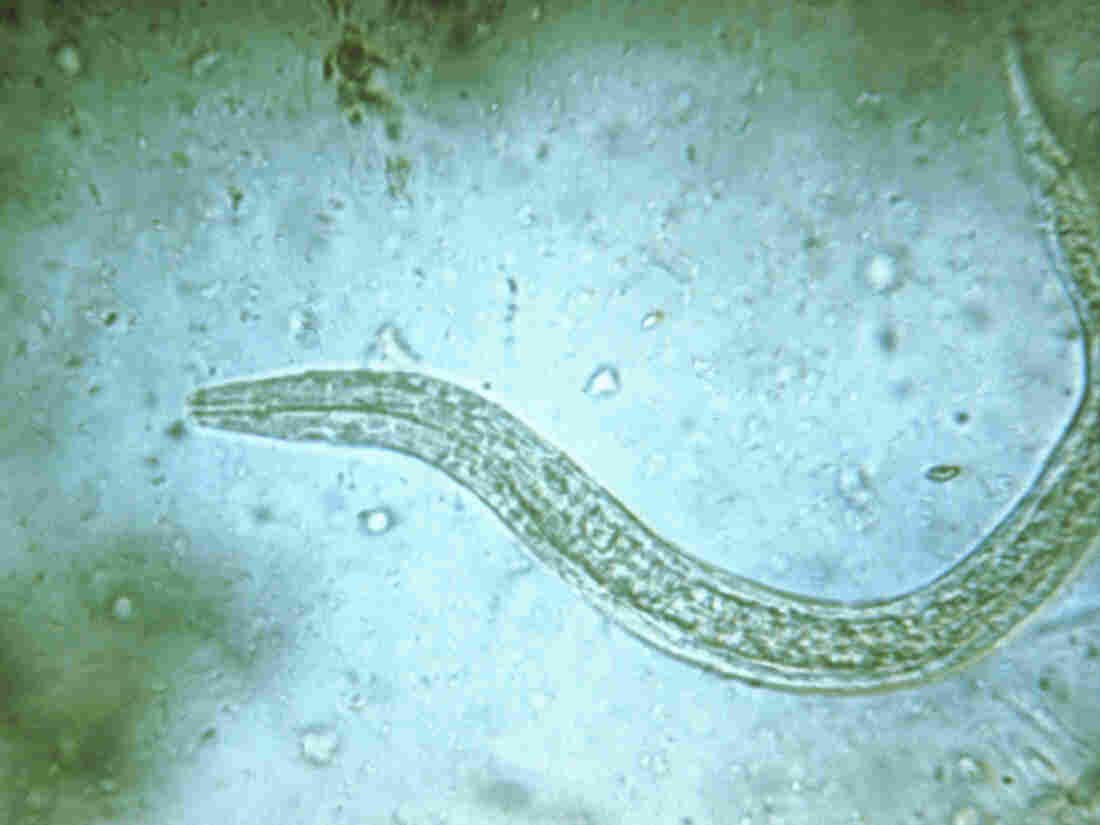 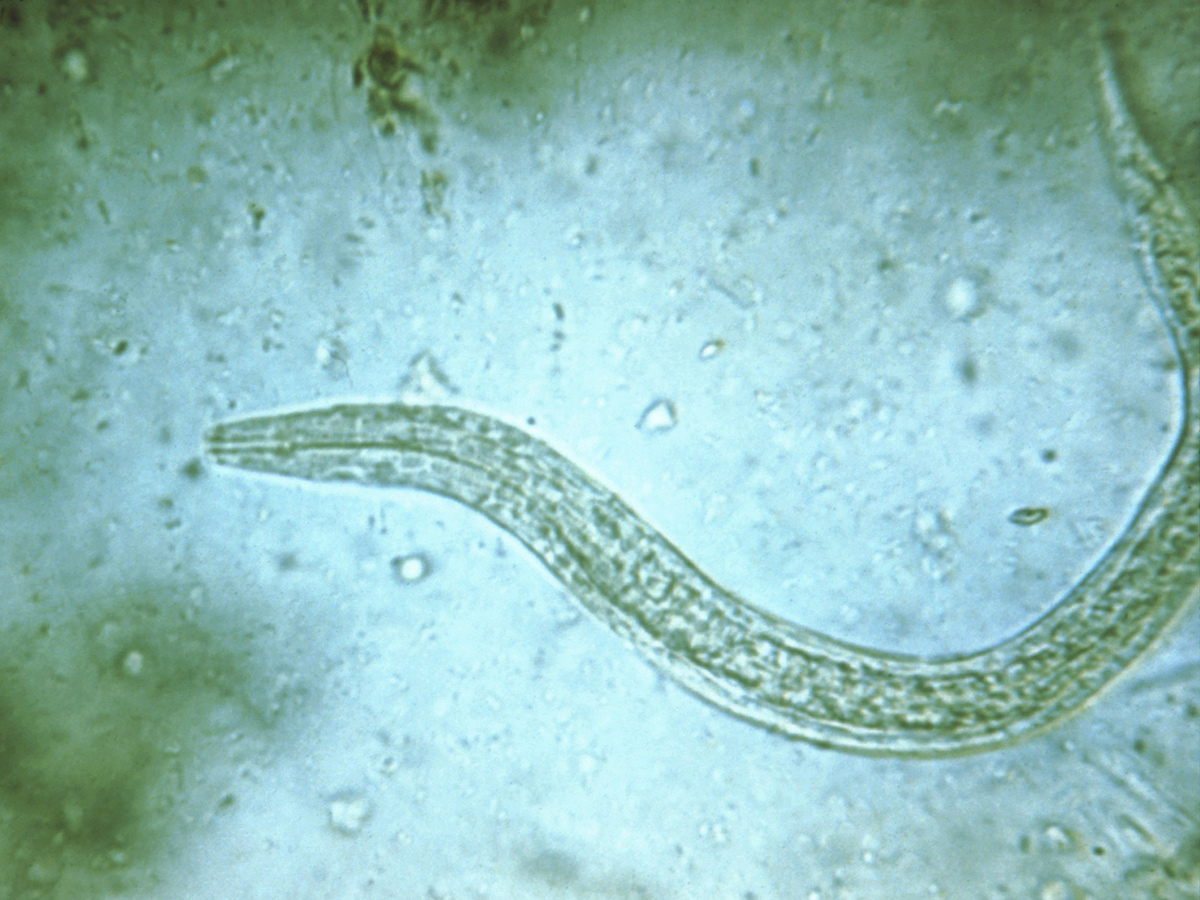 Our tummies are teeming with trillions of bacteria — tiny microbes that help with little things, like digesting food, and big things, like warding off disease.

Those same microbes may have another purpose: waging war against worms.

Researchers at Washington University in St. Louis made the discovery after studying the microbiomes of individuals from Liberia and Indonesia. They found that the guts of individuals infected with parasites share common microbes — even if they live in completely different geographic locations. Similarly, healthy individuals whose bodies can clear out parasites without treatment seem to share a common gut bacteria.

This suggests the gut microbiome can be altered to protect people from becoming infected with parasitic worms, says Makedonka Mitreva, the lead researcher on the study and a specialist in infectious diseases and the microbiome.

"It may be wishful thinking, but maybe we could implement a control strategy after deworming where we strengthen or alter the microbiomes of individuals who are prone to infection," Mitreva says.

Nearly 25 percent of the world's population is currently infected with parasitic worms like hookworm, whipworm or roundworm, according to the World Health Organization. The worms are a disease of the developing world, for the most part. They spread when an infected individual defecates outside, leaving behind stool that's contaminated with eggs. When the eggs hatch, wriggling microscopic worms can latch on to the ankles or bare feet of individuals who walk by.

Once on board, the worms burrow into skin and travel to the gut to feed on blood or other tissues. Symptoms can vary, depending on the number of worms inside a person. In cases of severe infection, people can experience anemia, nutritional deficiencies and impaired growth.

Despite decades of deworming efforts to rid the world of worms, people in developing countries get reinfected often, according to Mitreva.

"Even if the [drug] therapy works and the infection is cleared, the exposure to contaminated soil is so pervasive that new infections are extremely common," she says.

Mitreva and her team recently analyzed hundreds of fecal samples from infected and uninfected people in Indonesia and Liberia. Samples were obtained once from some individuals, but other participants were followed long-term to see how their microbiome changed over time with or without drug treatment.

Participants' fecal samples were first tested for the presence of parasites. Then they were studied for their microbes.

Twelve strains of bacteria were significantly associated with parasitic infection in both countries. These included Olsenella, a bacterium that has been shown to reduce gut inflammation when administered as a probiotic. It is also associated with lean versus obese individuals.

In worm-free individuals, the researchers identified a high presence of Lachnospiracae. The same genus was found in individuals that had parasites and were able to clear the infection naturally. Lachnospiracae has been associated with modulating gut inflammation during infections and has also been linked to obesity and protection from cancer.

What does it all mean?

"When the body is infected with worms, it tries to do worm expulsion with an inflammatory reaction," Mitreva says. "Worms have to fight back to remain in the gut; that's why worms are known to secrete anti-inflammatory molecules to reduce inflammation."

Mitreva adds, "Our interpretation is that parasites need a healthy environment for long-term survival. Good bacteria may facilitate parasitic survival, so a bacterium like Olsenella that decreases gut inflammation is helpful."

P'ng Loke, a parasitologist at New York University who was not involved in the study, says it's especially interesting that the research found that Lachnospiracae is associated with individuals who can clear our worms naturally.

But that's just it; it's just an association, Loke says. The researchers now need to demonstrate that these bacteria actually hurt or help worms.

"Whether the bacterial associations that are identified really do directly affect worm colonization efficiency hasn't been demonstrated yet," he says.

Mitreva agrees that more work is needed, but she's not giving up. In the future, she hopes to use fermented foods to plant worm-defending microbes inside of individuals to build their defense against worms.

That may be easier said than done.

"I don't think anyone knows how to really alter the microbiome at the moment. That's probably the 'dream' rather than a near-term possibility," Loke says.

A previous version of this story incorrectly said nearly 25 percent of the world's population is infected with parasitic worms like hookworm, ringworm or roundworm. In fact, the examples are hookworm, roundworm and whipworm.