Accessibility links
There's No HIV Vaccine Yet But Passive Immunization Is Being Studied: Injecting Anti-HIV Antibodies : Goats and Soda The idea is to inject anti-HIV antibodies that would kill the virus when people get exposed. A new study is promising — although it was conducted on monkeys. 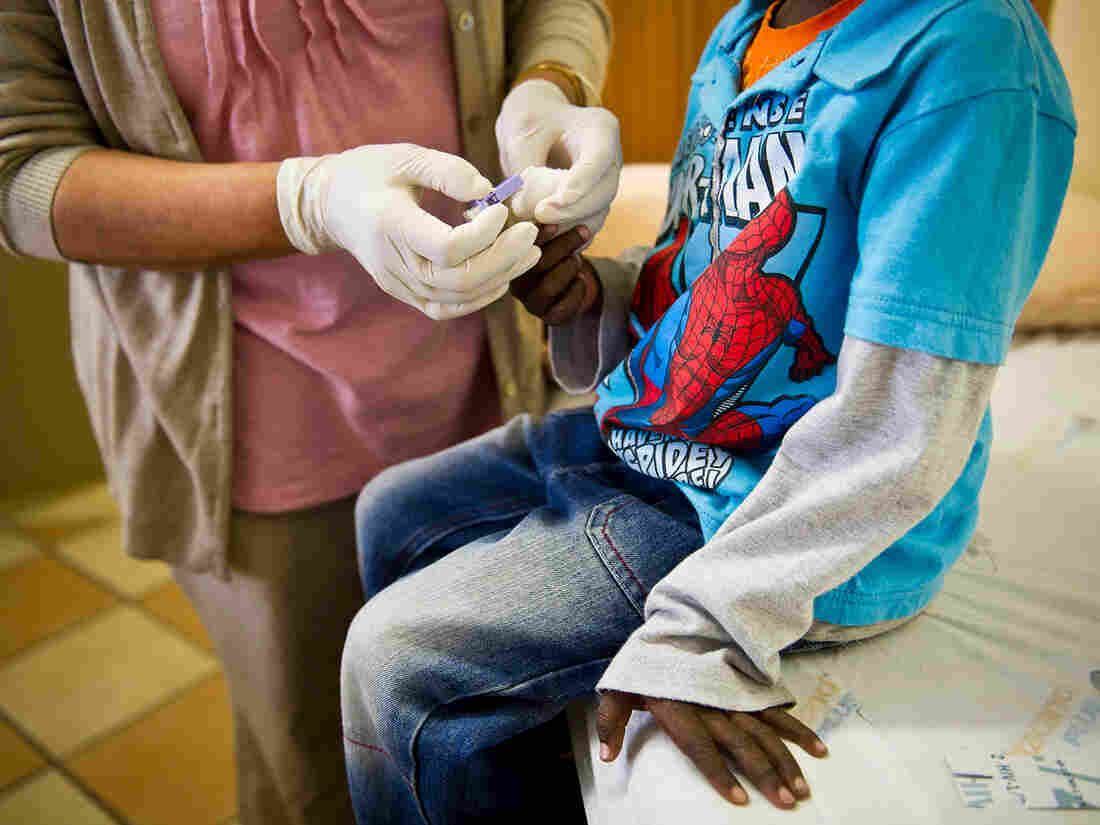 A child is tested for HIV in Johannesburg, South Africa. A single injection of antibodies that target HIV is being developed and analyzed. Foto24/Gallo Images/Getty Images hide caption 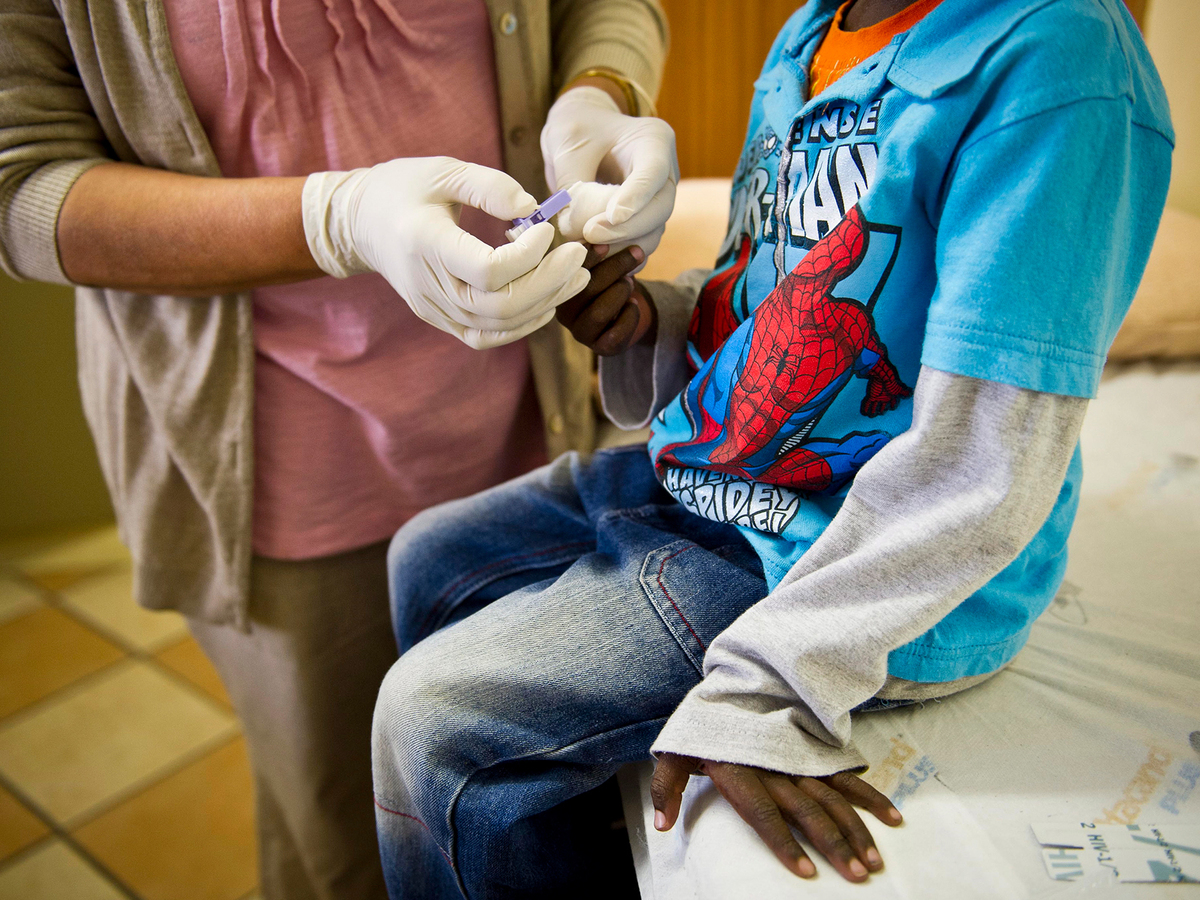 A child is tested for HIV in Johannesburg, South Africa. A single injection of antibodies that target HIV is being developed and analyzed.

After decades of intense effort, an effective vaccine against HIV is not on the horizon — and, some say, may never be possible. So some AIDS researchers are going passive.

As in passive immunization.

Active immunization is what an effective vaccine does. It stimulates the recipient to make antibodies that protect against a disease. Passive immunization involves the direct injection of antibodies extracted from survivors of a particular infection.

It's an old method of preventing infection when a vaccine isn't available — once used, for instance, to protect at-risk people from hepatitis before vaccines were developed. Instead of the lifelong protection from a really good vaccine, passive immunization is a temporary bulwark against infection.

A new report in Nature Medicine gives reason to believe it can work against HIV — at least, so far, in monkeys.

A single injection of two anti-HIV antibodies protected five of six macaque monkeys from infection for six to nine months as they got weekly inoculations of a potent human-simian hybrid of the virus called SHIV.

"We think this approach might be an important way to prevent transmission in humans, particularly in regions of the world where HIV is endemic," says Malcolm Martin, chief of the viral pathogenesis and viral section of the National Institute of Allergies and Infectious Diseases and a senior author of the paper. "This is not a vaccine but a way to prevention."

Emilio Emini, director of the Gates Foundation's HIV program, a funder of the new research, agrees the approach is worth pushing. "The potential is there for the development of a neutralizing antibody cocktail that could be injected to provide many months of protection against HIV infection," Emini says. (The Gates Foundation is also a funder of NPR and this blog.)

Over the last few years, scientists have identified something like 100 of these anti-HIV antibodies, giving them plenty of opportunities to mix and match for maximum effectiveness.

The hope is that an injection of these antibodies every six to 12 months could protect large numbers of people from HIV in parts of the world where most infections are occurring. Currently 1.8 million people are newly infected with HIV every year. And other means of prevention, such as a daily pill containing anti-HIV drugs, have proved too cumbersome. "Taking a pill every day can be just about impossible to do in a population of young people, even under the best of circumstances," Emini says.

And protecting that young population is key. "In southern Africa, in particular, over the past 10 or 15 years there's been an explosion of young people," Emini says. "In many of these countries the average age is in the 20s. Having the means to protect these young people is something that will be absolutely critical to controlling the epidemic."

The Nature Medicine paper is just the latest report from a burgeoning new branch of HIV research that's gathering momentum.

"This is not just about doing cool science — and this is cool science," says Mitchell Warren, executive director of AVAC, a global HIV prevention advocacy group. "People are excited about this antibody research as a whole new prevention approach. The long-term goal is still a vaccine. But in HIV prevention we will take what we can get."

But if you've been following AIDS, you might be wondering how antibodies from HIV-infected people could possibly protect against infection. After all, the hallmark of HIV infection is that immune defenses don't work.

The answer is that researchers are using antibodies derived from a tiny fraction of HIV-infected people — about 1 percent — called "elite controllers" or (the term Martin prefers) "elite neutralizers." As his term indicates, these "elite" patients make antibodies that can neutralize, or kill, HIV. The patients typically have low levels of the virus and can live longer without virus-suppressing drugs before they get symptoms of immune system collapse, or AIDS.

Ultimately, most elite neutralizers do progress to AIDS if they don't take antiviral drugs. The reason, Martin says, is that during the initial stages of their HIV infection, their immune system "takes a major hit from which it never recovers." That allows HIV to establish hideaways, or reservoirs, in the body. By the time their immune systems start generating antibodies to neutralize HIV, Martin says, "it's too late" to keep the infection under control forever. The horse is out of the barn.

In the new work and previous experiments, Martin and colleagues have identified the particular antibodies from these rare patients that can prevent HIV infection in the test tube. They then harvest these antibodies from patients and test them in monkeys to see if they prevent HIV infection from getting established in the first place. They've also learned to tweak the antibodies, introducing mutations that extend their lifetime in the bloodstream. And they've found that passive immunization works best when they combine two types of antibodies in one injection.

Two other findings improve the prospects that passive immunization may work in the real world:

These elements "make this report very important," Emini says. "Everything is moving in the right direction."

Martin says another promising factor is the likelihood that the injected antibodies will stick around longer in humans' bloodstream than they do in monkeys' – thus offering more durable protection.

That's because a monkey's immune system recognizes the human-derived antibodies as foreign and so generate antibodies against the antibodies, clearing them from the blood. In studies when humans have been injected with these antibodies, Martin says, "so far, there has been no report of humans ever developing anti-antibodies. So it's very likely, though we don't have proof of this, that these antibodies will last longer when we give them to humans."

The antibody cocktail researchers envision would contain neutralizing antibodies directed at multiple parts of the HIV outer coat. That would work against various strains of HIV circulating around the world and reduce the risk the virus would develop resistance.

Still, genetically engineered antibodies "are actually quite expensive to produce," Emini acknowledges. "So we need to develop ways to produce them at cost levels that are realistic for countries where most of the infection still occurs." The Gates Foundation's target price is no more than $150 per person per year — an amount comparable to the cost of HIV drug treatments now reaching 21 million people a year.

Momentum behind the passive immunization against HIV is growing. Eight human studies are underway using the approach.

Two of them are enrolling a total of 5,000 people at risk of HIV infection — men who have sex with men in the United States, Latin America and South Africa, and women in seven African countries.

Those trials are using one of the first of the 100 anti-HIV antibodies to be discovered, called VRC01. But it has to be delivered every two months in 45-minute intravenous infusions. So even if that's shown to be effective in preventing HIV infections, it's not going to be practical as a real-world prevention strategy.

The two-antibody combination in the new report might be. It's being injected into humans in a small study that began last August. It's designed to see if any adverse effects arise, but it can also yield useful data on how long the antibody persists in humans and whether humans mount an immune defense against them.

Even though the monkey studies and human trials are preliminary, there's a sense of urgency behind the passive-immunization approach. Despite surprising success in getting anti-HIV treatment to infected people in most-affected nations, nobody thinks the world can treat its way out of the HIV pandemic.

"The concern is that if we don't control the pandemic, 15 or 20 years from now we'll have more people with HIV in southern Africa than we had 15 years ago," Emini says. "So the urgency remains very strong, and getting stronger."

Richard Knox is a New Hampshire-based health and science reporter, former NPR science correspondent and currently senior correspondent for WBUR in Boston. He's been reporting on HIV/AIDS since the beginning of the epidemic. Contact him @DickKnox

An earlier version of this story said passive immunization can be given by subcutaneous injections, like a flu shot. A flu shot is, in fact, intramuscular.