Accessibility links
Suicide Bombings, Mines And Rockets Cause Thousands Of Child Casualties In Afghanistan Each Year : Goats and Soda Barkatullah is one of thousands of children who are casualties of the conflict. The latest are victims from this month's suicide bomb attacks. What does the future hold for these youngsters? 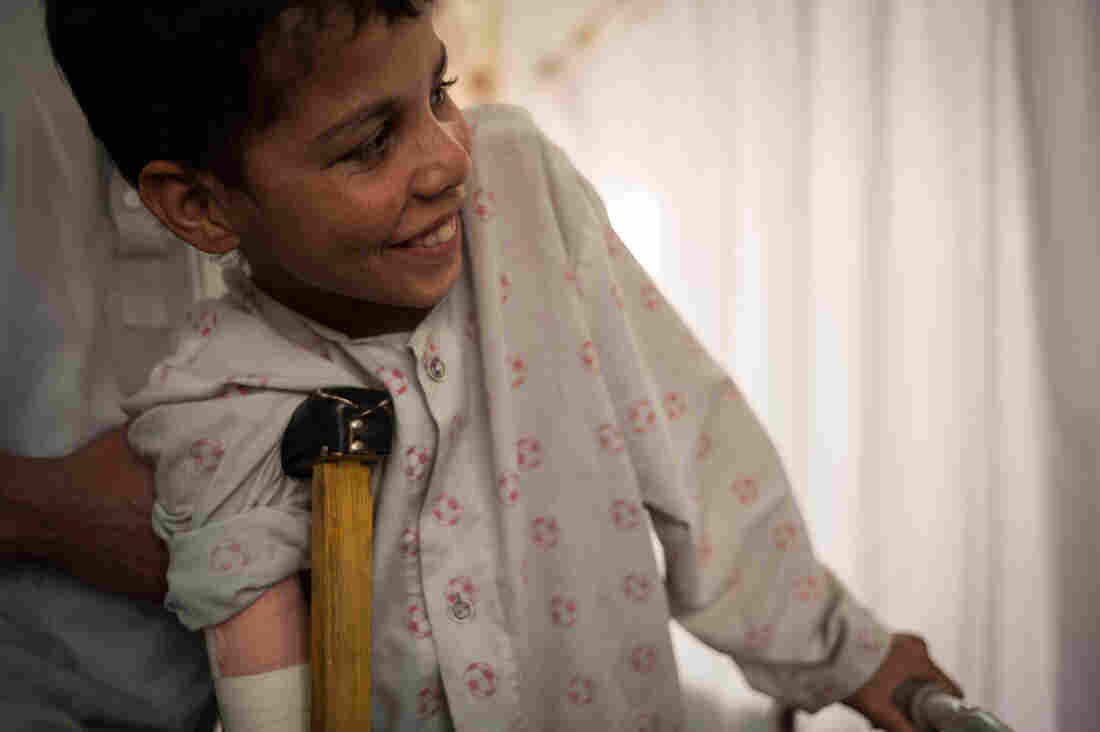 Barkatullah smiles and rests on a crutch and grips his walker during a physical therapy session at Emergency War and Trauma Hospital in Kabul. The 13-year-old lost his right arm and leg in an explosion. He practices standing on the walker 30 seconds at a time. Ivan Armando Flores for NPR hide caption 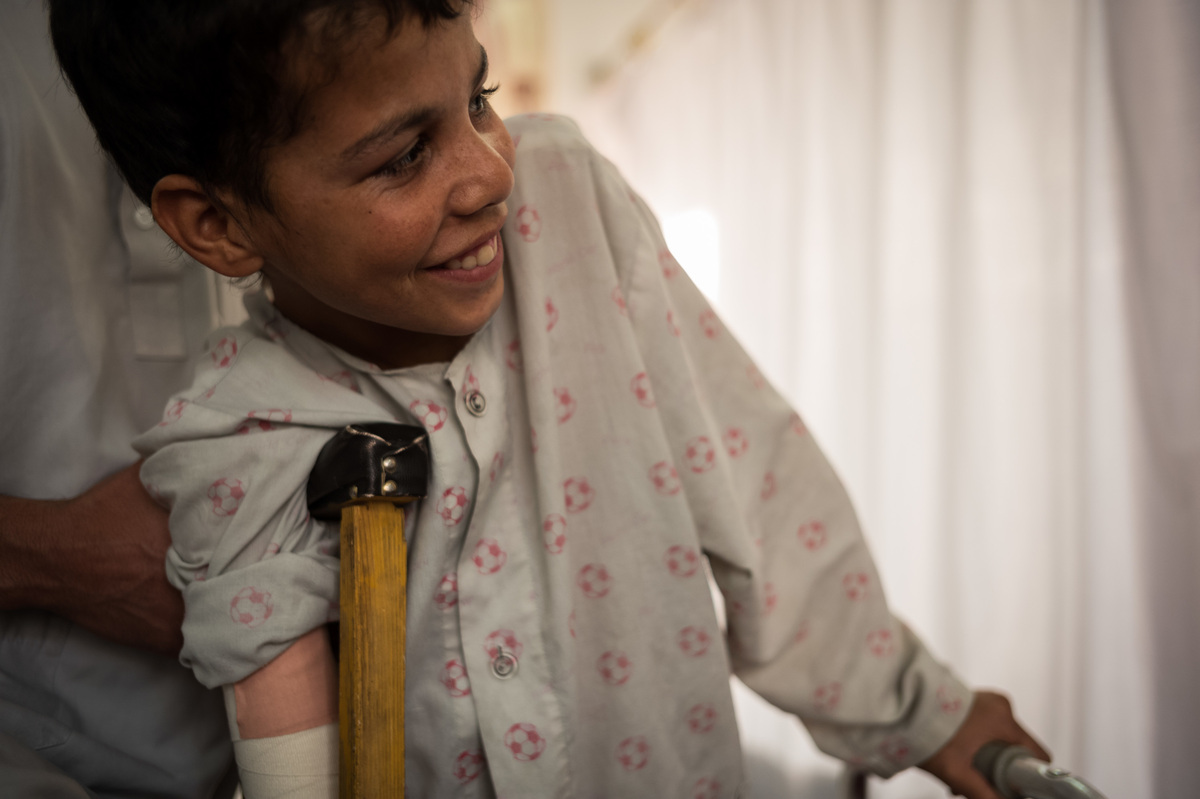 Barkatullah smiles and rests on a crutch and grips his walker during a physical therapy session at Emergency War and Trauma Hospital in Kabul. The 13-year-old lost his right arm and leg in an explosion. He practices standing on the walker 30 seconds at a time.

Barkatullah is 13. He lost his right arm and leg in a mine explosion on May 2017. But that does not deter him from dreaming of a brighter future. "The policemen were among the people who rescued me and saved my life," he says on a chilly evening in the children's playground at the Emergency War and Trauma Hospital in Kabul. "That is what I want to do when I grow up."

In Afghanistan, thousands of children each year are caught in the crossfire of ongoing violence. This past Sunday, multiple suicide bombings killed at least 25 people, including 11 schoolchildren in the southern city of Kandahar, and wounded dozens more. The week before, on Sunday, April 22, a suicide bomber struck in Kabul, aiming at civilians registering to vote at a school building in Kabul. Among the 57 deaths, 8 were children, according to Afghan police. There were another 100-plus wounded. 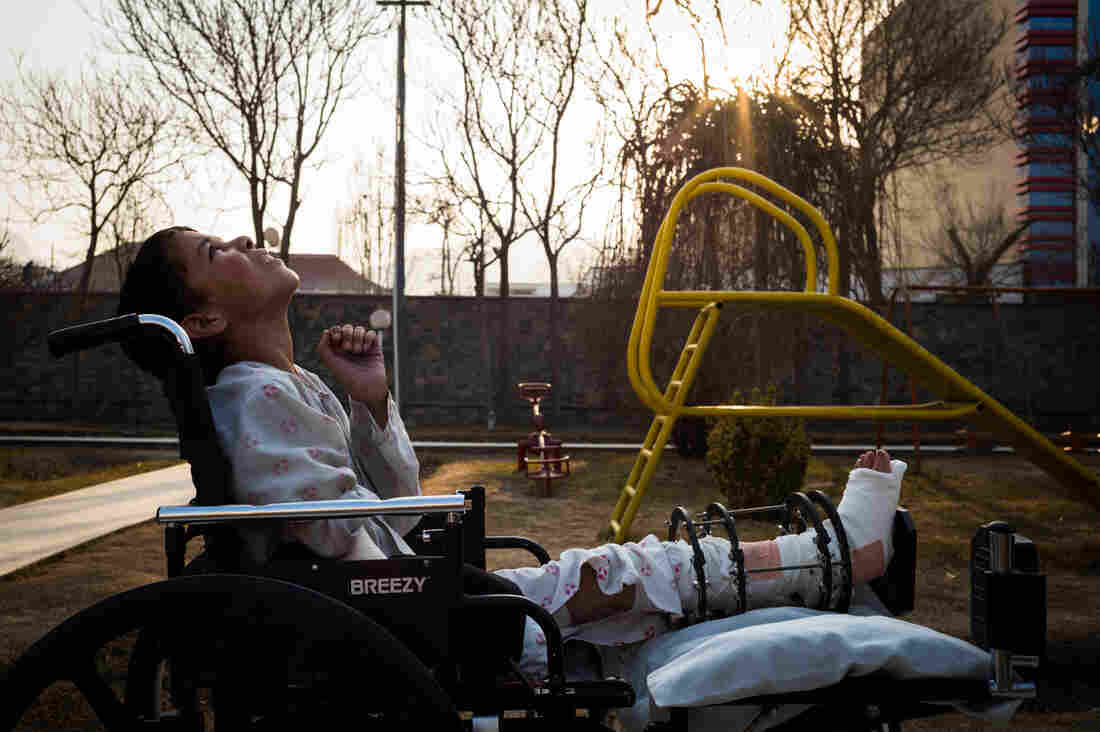 Barkatullah sits in his wheelchair and looks up at a passing helicopter. He's on the playground at the hospital where he's being treated. He's not able to use the equipment because of his injuries. Ivan Armando Flores for NPR hide caption 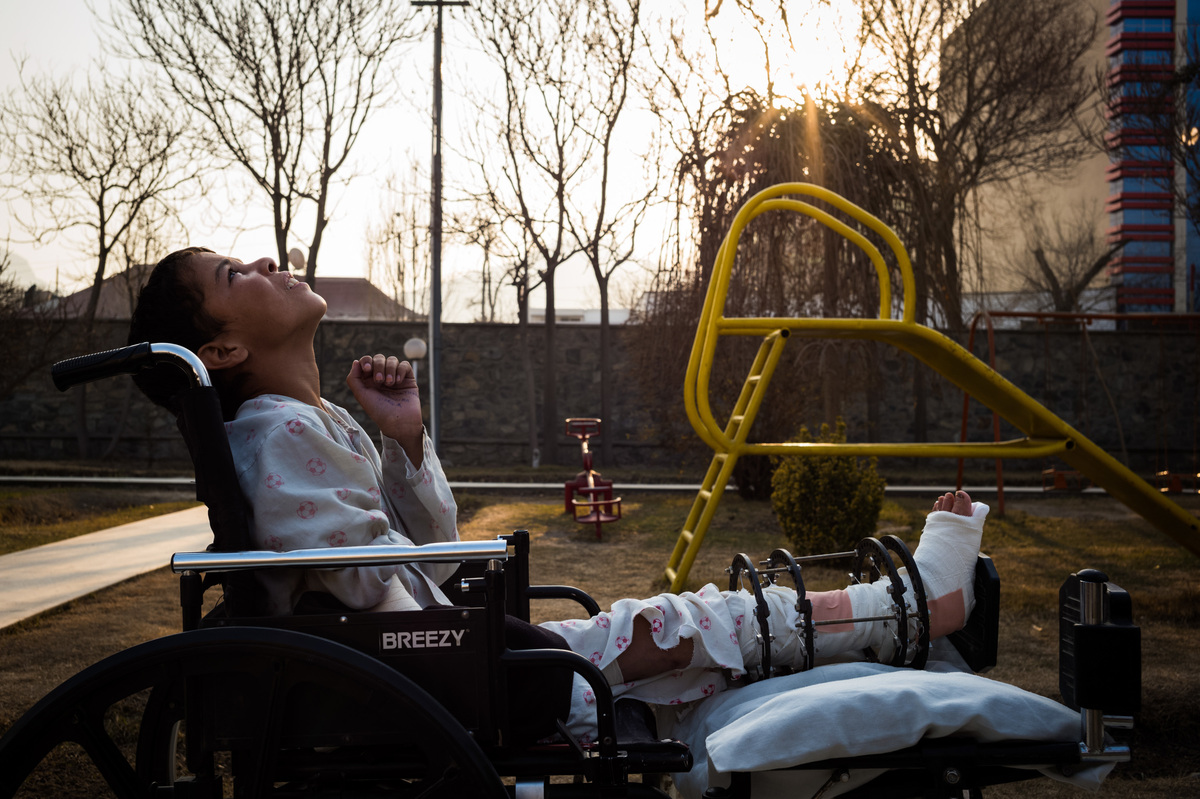 Barkatullah sits in his wheelchair and looks up at a passing helicopter. He's on the playground at the hospital where he's being treated. He's not able to use the equipment because of his injuries.

"There were bodies everywhere, some as young as 3- and 4-years-old," says 45-year-old Mariam, waiting for news of her 14-year-old nephew, who was injured in the incident.

In its most annual report issued in February and covering 2017, the UN Assistance Mission in Afghanistan (UNAMA) documented 10,453 civilian casualties across Afghanistan — and 3,179 of them were children. The number of child victims – casualties refers to both those who are killed and injured — represents a 9 percent drop over the previous year. UNAMA attributed the drop in figures to "actions taken by the Government of Afghanistan and Pro-Government security forces in 2017 to protect communities from harm."

Despite this positive sign, there is still deep concern. "Whether the number of documented casualties is going up or going down shouldn't obscure the fact that thousands of children are being injured or killed each year in the conflict in Afghanistan, a fact that is tragic and deeply unacceptable," says Heather Barr, senior researcher at Human Rights Watch in Kabul.

The annual total of children who are injured or killed stands in stark contrast to figures from almost a decade ago. In 2009, the U.N. body recorded 345 children killed of the total 2,412 civilian deaths caused by conflict-related violence. 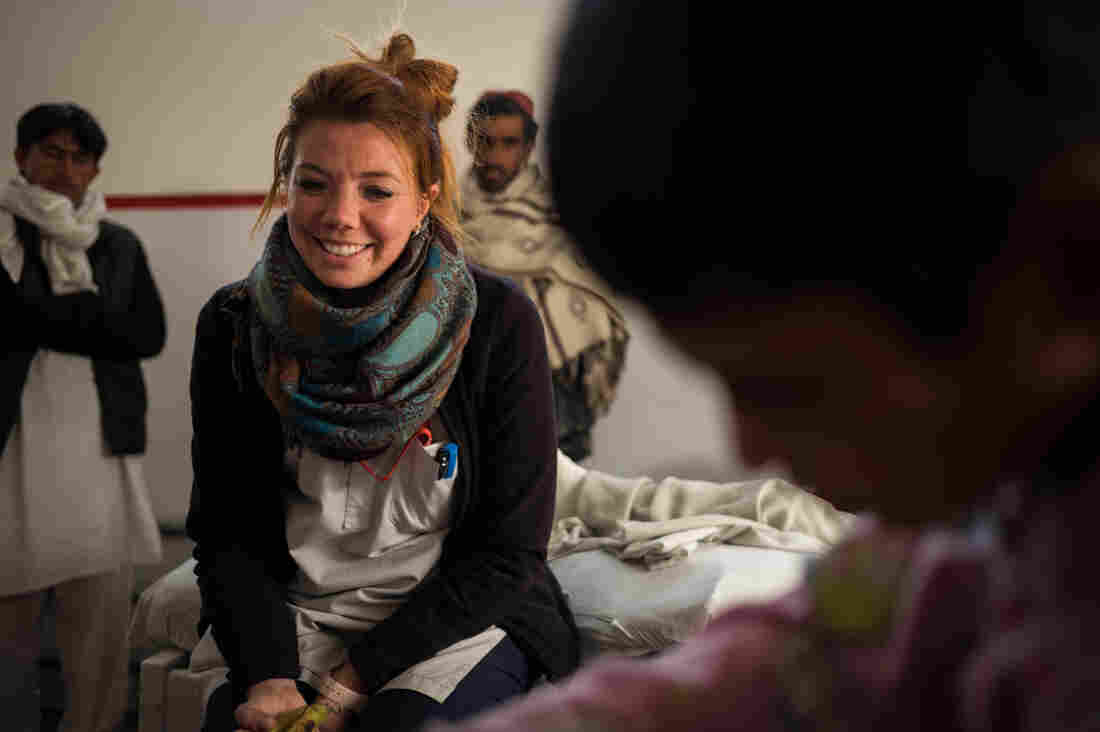 The survivors may have months, perhaps years, of rehab ahead of them. Barkatullah stares wistfully at the equipment in playground at the hospital, much of which he can no longer use.

But a moment later he is swiftly wheeling away in his new wheelchair, daring his physiotherapist to chase him. "He is a very active and friendly kid — always running around in his wheel chair, teasing the other children and even the doctors," says Carolina Stucchi, an Italian physical therapist at the hospital. And then she tries to catch him.

Barkatullah has lived at the hospital on and off for the past nine months while having surgeries and physical therapy. The facility has been a crowded place over the last few years: There were 2,829 child casualties in 2015 and a spike to 3,512 in 2016. In 2018, there have been 583 child casualties (155 deaths and 428 injured) in the first three months of the year.

And that is a challenge for an already overburdened health-care system in Afghanistan. Health workers face logistical challenges keeping in touch with patients in provinces that aren't always well connected with the city. They also have to work with family and relatives who may lack the knowledge and resources to care for the injured child. As a result, many children don't get follow-up support from the hospital.

Barkatullah, who like many Afghans goes only by one name, was out with his two brothers grazing their family sheep in Wardak province ten months ago when an improvised explosive device (IED) exploded close to them. His brothers, ages 8 and 10, died. In addition to losing two of his limbs, Barkatullah "suffered from multiple internal injuries," says Stucchi.

In the bed close to Barkatullah's lies 10-year-old Hikmatullah. Unlike Barkatullah, he doesn't like to talk to anyone. His father, Azizullah, shares his story. "He was at home when a stray rocket from an ongoing gun battle close by hit our house. We don't know who shot it," he recalls. Hikmatullah suffered injuries to both legs, left hand and also in the chest. "He also lost one eye," his father says, adding that his son hasn't talked much since the incident.

"Children have their own coping mechanisms in dealing with situations," explains Stucchi, who not only conducts physical therapy with the children but also trains the parents to support children who have lasting disabilities after being injured. "It can sometimes be challenging to teach the parents, but these children are stronger than the ones I have worked with in other countries," she adds.

The child casualties are caused by the insurgents but also by pro-government forces. According to UNAMA, 18 percent of the casualties recorded thusfar in 2018 were attributed to pro-government forces. Earlier last month, an Afghan air strike on a suspected Taliban gathering of religious students in Kunduz province resulted in 59 casualties, many of them children (although the exact numbers are still under investigation). The incident led to an uproar against civilian killings, especially targeting children. Former President Hamid Karzai was among the stronger opponents of such strikes. He said that "air raids that target houses, schools and hospitals under the pretext of fighting against terrorism" are "an anti-Islamic act and against all humanitarian norms."

The conflict has an impact on children beyond the deaths and injuries. According to researcher Barr, "The statistics do not tell the tale of the far greater number of children who go hungry or go out to work much too young because wage earners in their home have been killed or injured; children who are forced out of school as insecurity escalates or their school is damaged or occupied; children facing dangers and desperation after their families are internally displaced within Afghanistan or flee as refugees; girls forced into marriage early by families that can no longer feed them because of the fighting and its economic consequences; and children subjected to sexual abuse such as the practice of bacha bazi by fighters."

Against such a backdrop, the resilience of Barkatullah is all the more remarkable. But even this strong-willed child has fears. "I like it a lot here; I don't want to go back home," he tells us, a day after one of his many surgeries. He shows us the list of names of his "best friends" — the staff at the children's ward — scribbled on his palms to help him remember and pronounce. "They are helping me walk again," he adds gratefully. He says he prefers staying at the hospital rather than returning home.

Overhearing his son's remarks, his father, Abdul Rahman, is moved to tears. "Our home isn't in a safe place and I don't want Barkatullah to return either," he admits with a heavy heart.

"Why don't you take him with you to your country?" says the father as the photographer and I prepare to leave the hospital. "He could have a better future there," he says, pleading for the safely of his only surviving child.

Ruchi Kumar is a journalist who reports from India and Afghanistan on conflict, politics, development and culture stories. She tweets at @RuchiKumar