Accessibility links
How Do Indonesia's 'Sea Nomads' Stay Under Water So Long? The Secret May Lie In The Spleen : Goats and Soda Researchers investigate how the Bajau people of southeast Asia — aka "sea nomads" — can spend so much time under water without scuba gear as they hunt for seafood. 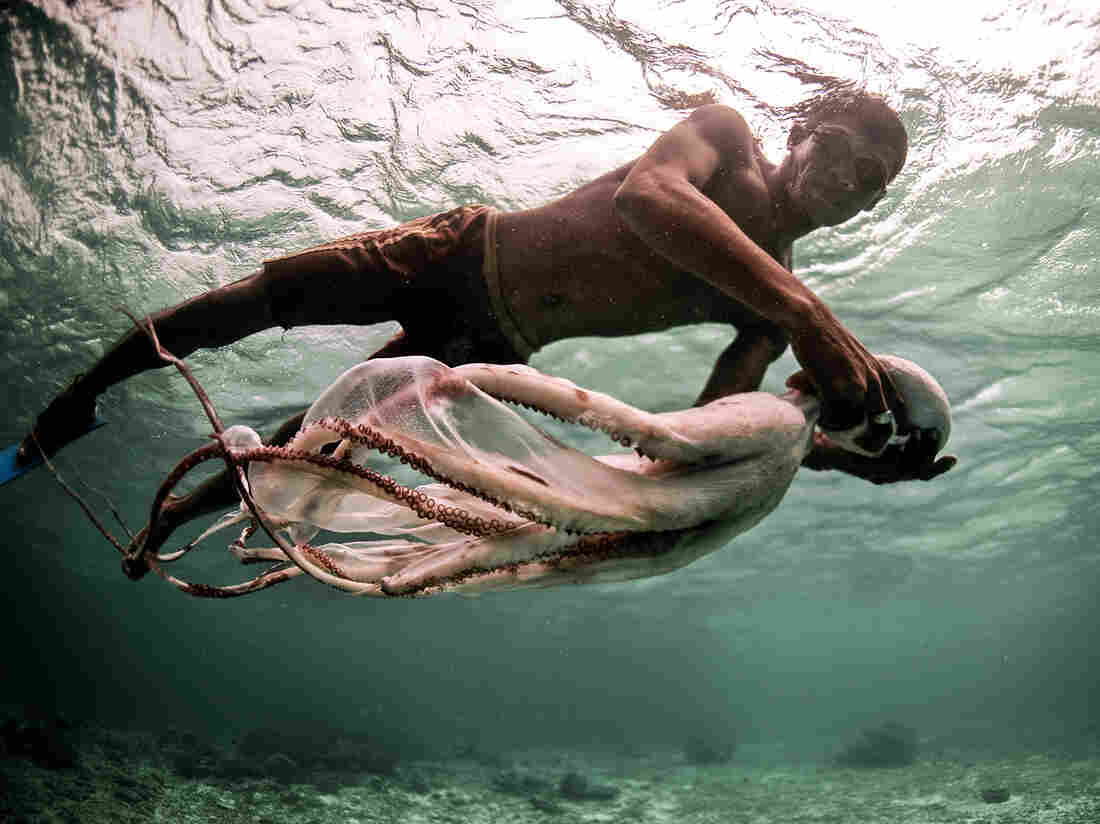 Jatmin carries a freshly-speared octopus back to his boat. James Morgan hide caption 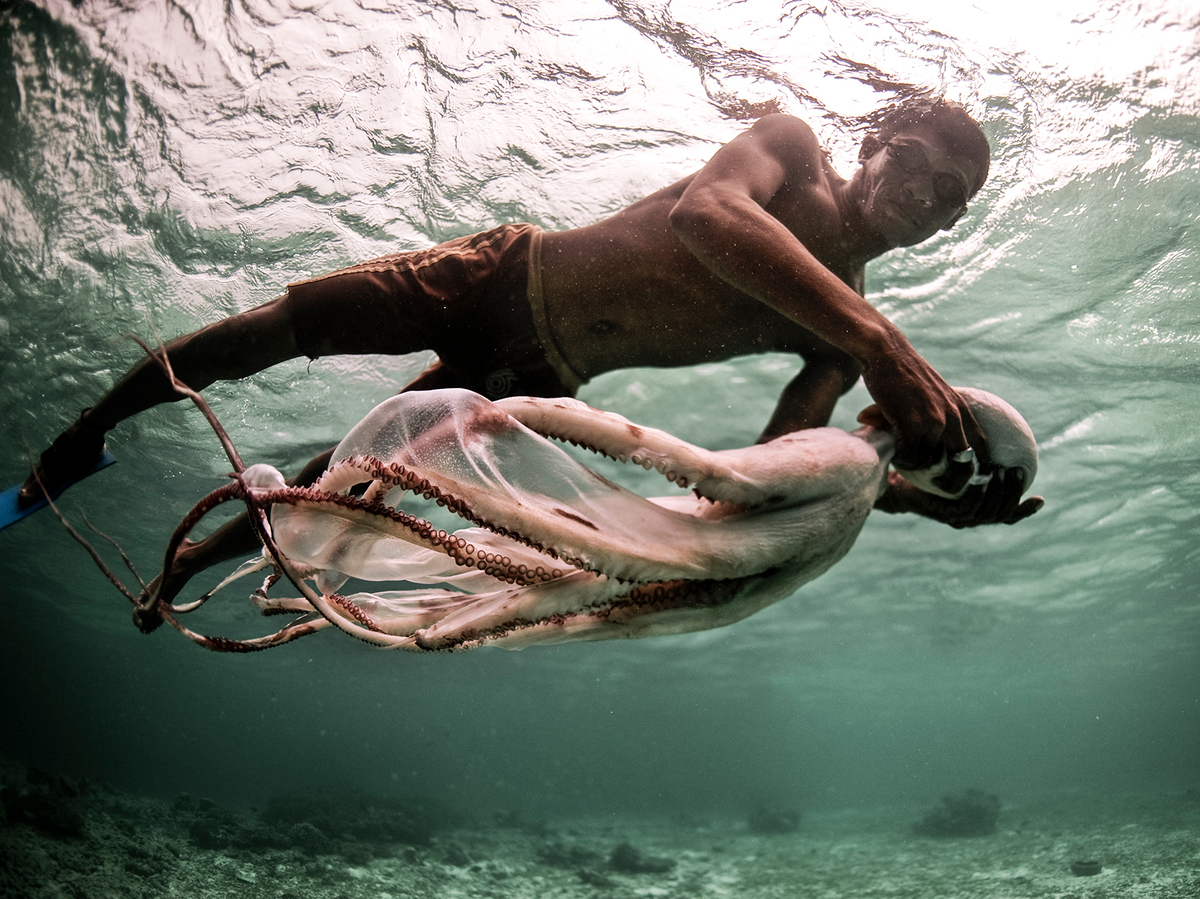 Members of the nomadic Bajau people often spend up to five hours a day underwater. They're hunting for fish, octopus and other seafood.

And they don't even use diving gear.

So what's their secret? 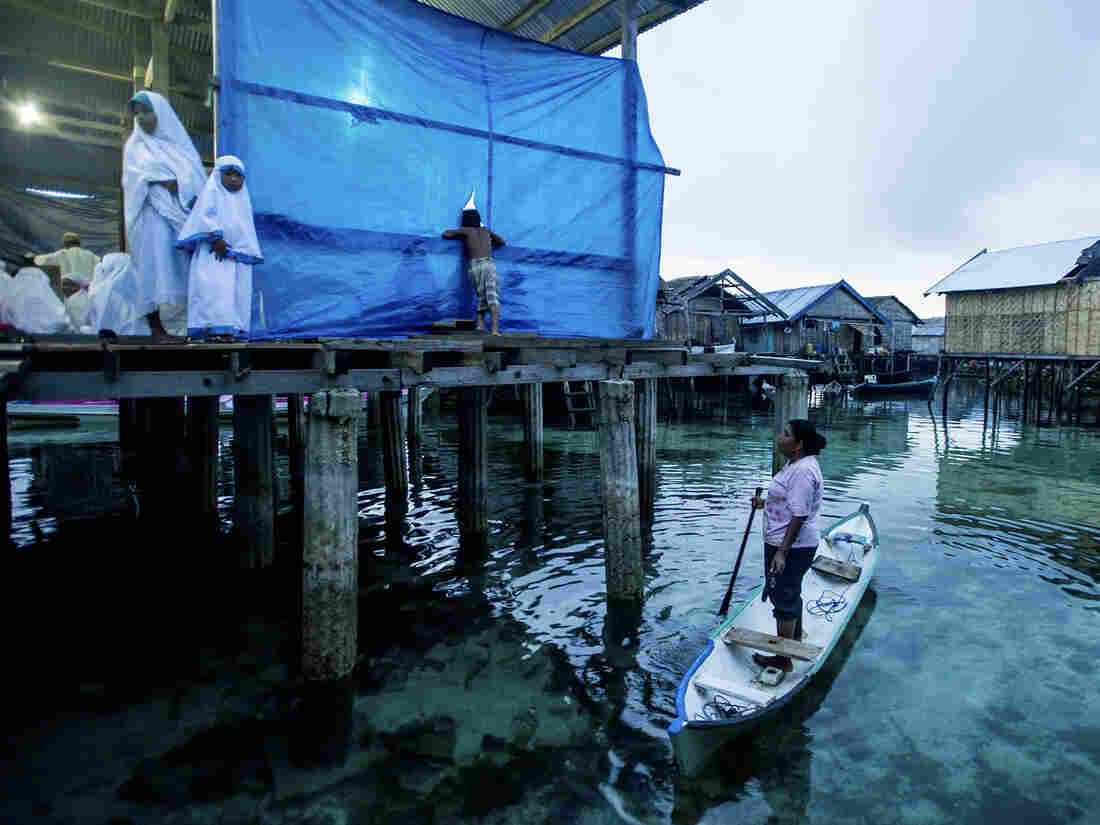 Many of the Bajau now live in houses perched on stilts, but they hold a deep reverence for the ocean and the spirits that they believe inhabit the waters. James Morgan hide caption 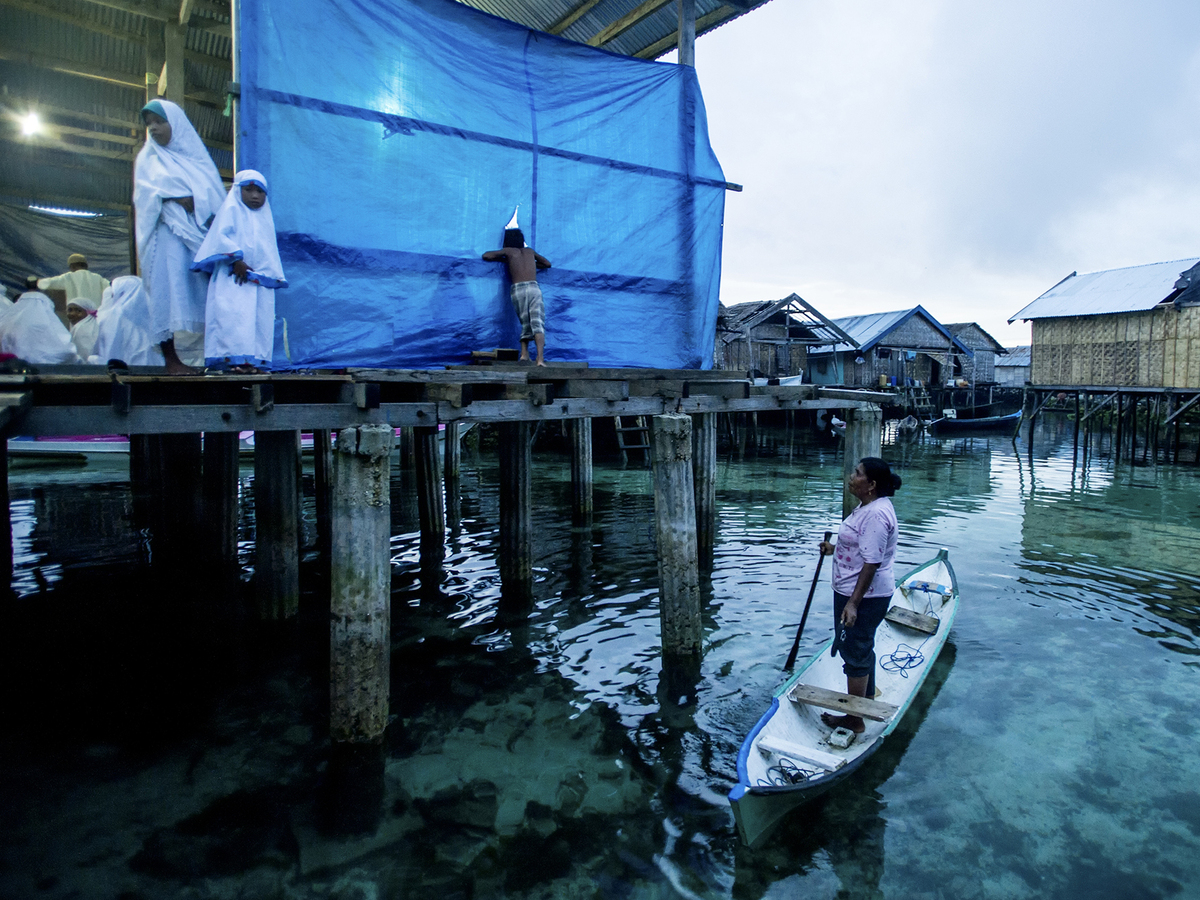 Many of the Bajau now live in houses perched on stilts, but they hold a deep reverence for the ocean and the spirits that they believe inhabit the waters.

New research suggests this extraordinary diving ability is due to a special trait the Bajau have developed: larger spleens.

The Bajau — who mostly live in the Philippines, Malaysia and Indonesia and are nicknamed "sea nomads" for their houseboats and seaborne lifestyle — have spleens 50 percent larger than average, according to a study published in Cell this month. (In case you're wondering, an average spleen weighs about 5.3 ounces and at its longest point is about 4 inches long.)

"I'm not sure anyone was really expecting to get a positive result, simply because these kinds of adaptations are relatively rare in modern humans," says Melissa Ilardo, a doctoral student at the University of Copenhagen who studied the Bajau.

These enlarged spleens could explain how the sea nomads hold their breath for so long underwater.

"I was told by one diver that in his youth he could dive for 13 minutes," Ilardo says. And the Bajau have been observed to go 229 feet deep. 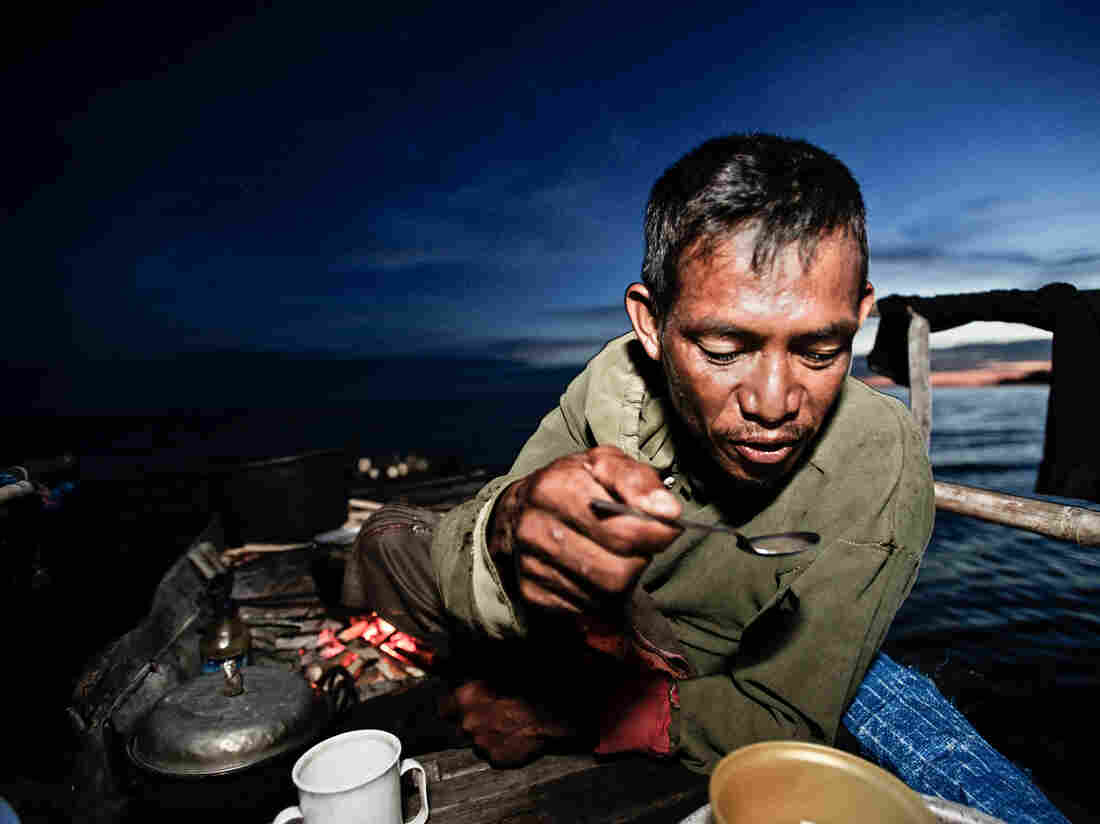 Amja Kasim Derise cooks dinner on his boat in Sulawesi, Indonesia. The back of the boat is used for cooking, the middle for sleeping and the front for fishing. James Morgan hide caption 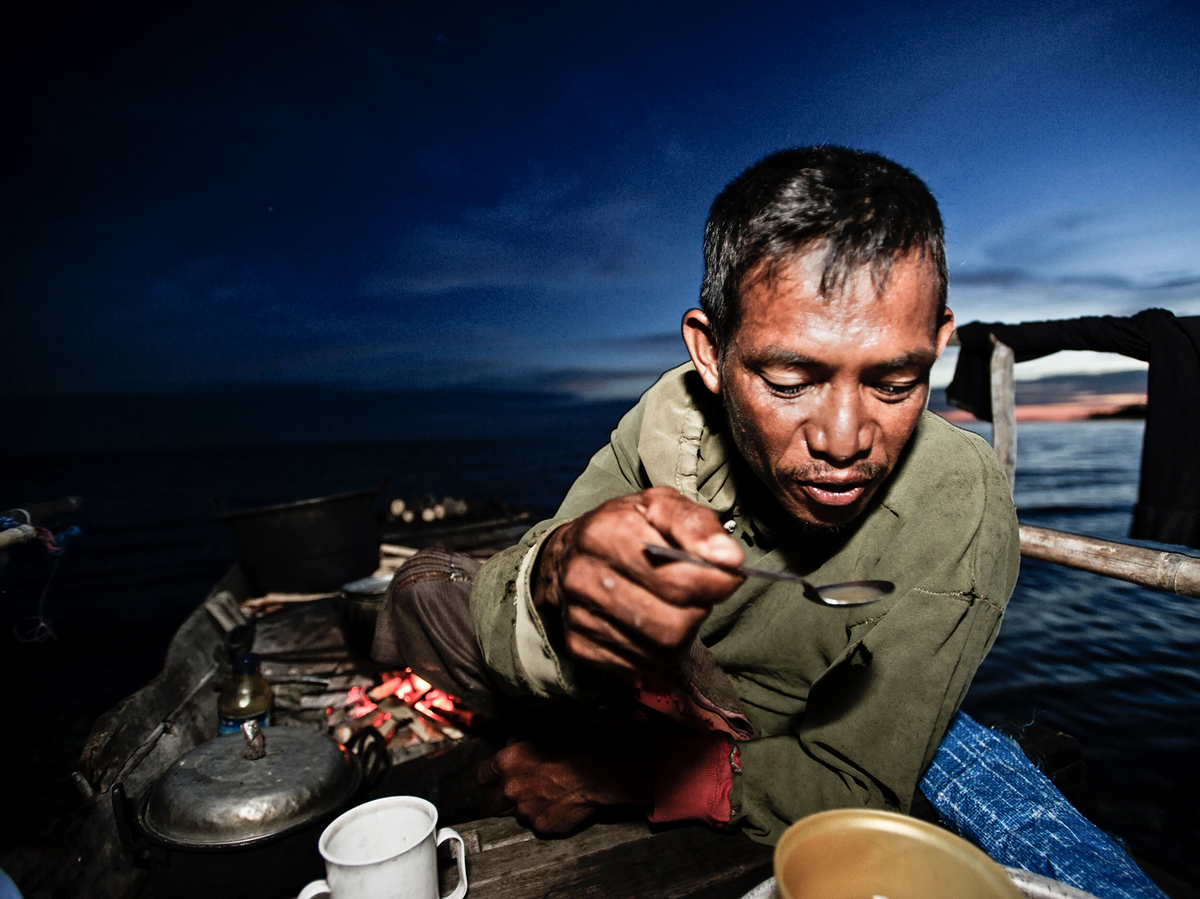 Amja Kasim Derise cooks dinner on his boat in Sulawesi, Indonesia. The back of the boat is used for cooking, the middle for sleeping and the front for fishing.

Average humans usually can't go longer than one to two minutes holding their breath underwater. That's where spleen size could make a difference. 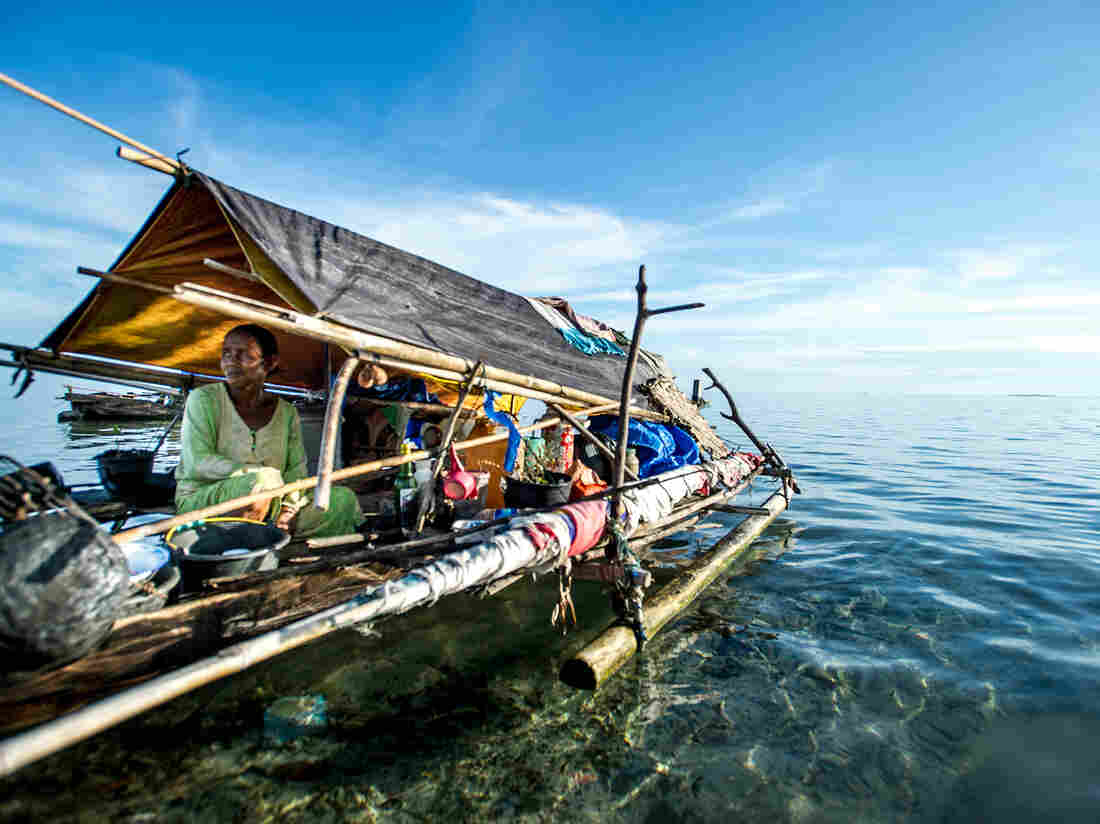 Ibu Diana Botutihe has lived her entire life at sea, visiting land only intermittently to trade fish for rice, water and other staples. Here she is pictured on her boat in Sulawesi, Indonesia. James Morgan hide caption 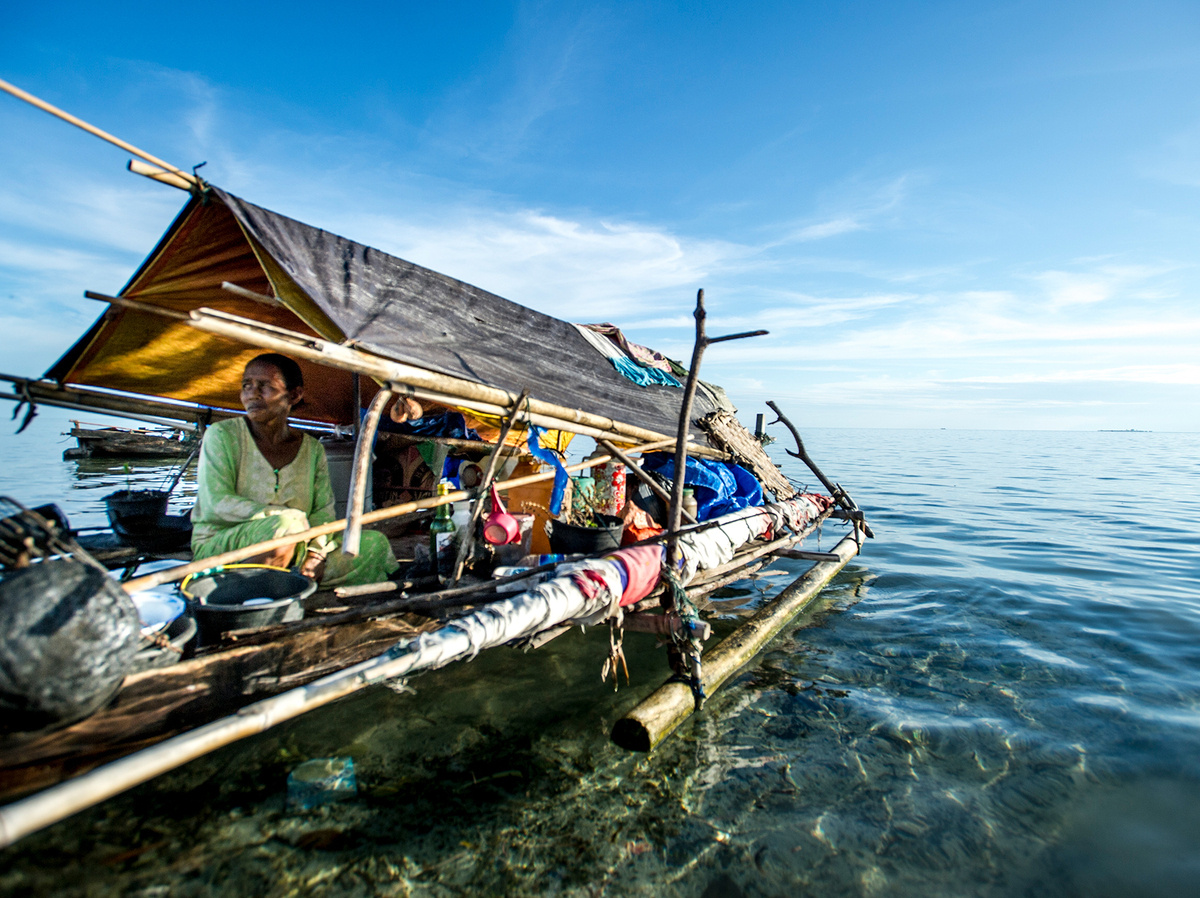 Ibu Diana Botutihe has lived her entire life at sea, visiting land only intermittently to trade fish for rice, water and other staples. Here she is pictured on her boat in Sulawesi, Indonesia.

The researchers made the discovery after traveling to maritime Southeast Asia and personally measuring the spleens of 59 Bajau, both male and female, using a portable ultrasound. Although they don't do much spearfishing, women dive to collect clams, seaweed and sea cucumbers. The measurements were then compared to 34 unrelated individuals living in a neighboring community that doesn't spend much time diving.

Mouth swabs were also collected from villagers for DNA analysis. The results further confirmed the findings, revealing a genetic mutation in the Bajau's PDE10A gene that may increase spleen size. Mutations in this gene are known to affect thyroid hormone levels in humans. Studies in mice have shown that increased thyroid hormone levels are tied to larger spleens.

"I think the study is very compelling," said J. Koji Lum, an anthropologist at Binghamton University who has studied Pacific island populations and was not involved in the study. "The authors did a good job generating and analyzing diverse data to demonstrate genetic selection and physiological adaptation to breath holding in the Bajau."

Lum would like to see spleens measured in more landlubbers versus Bajau populations to confirm the size difference. He'd also like to a see a larger number of participants in future studies. 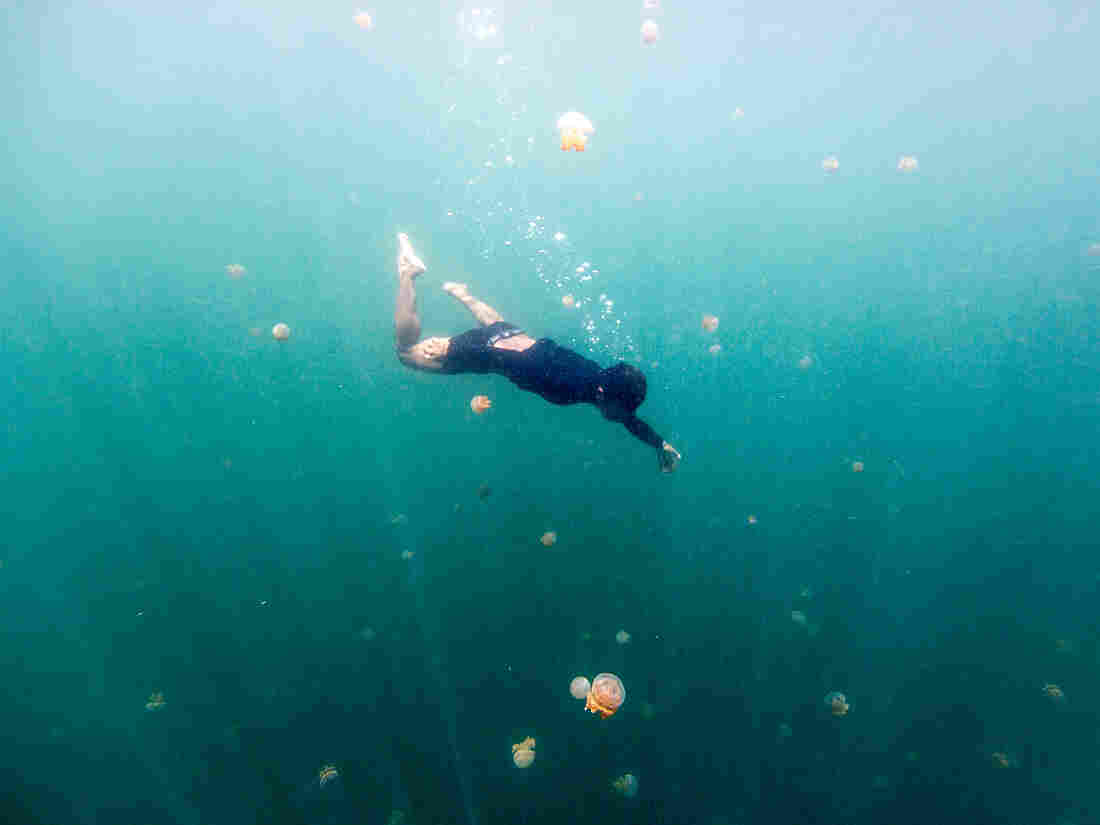 The Bajau are adept free divers. Some of them spend up to five hours a day under water, searching for food and other creatures for trade. James Morgan hide caption 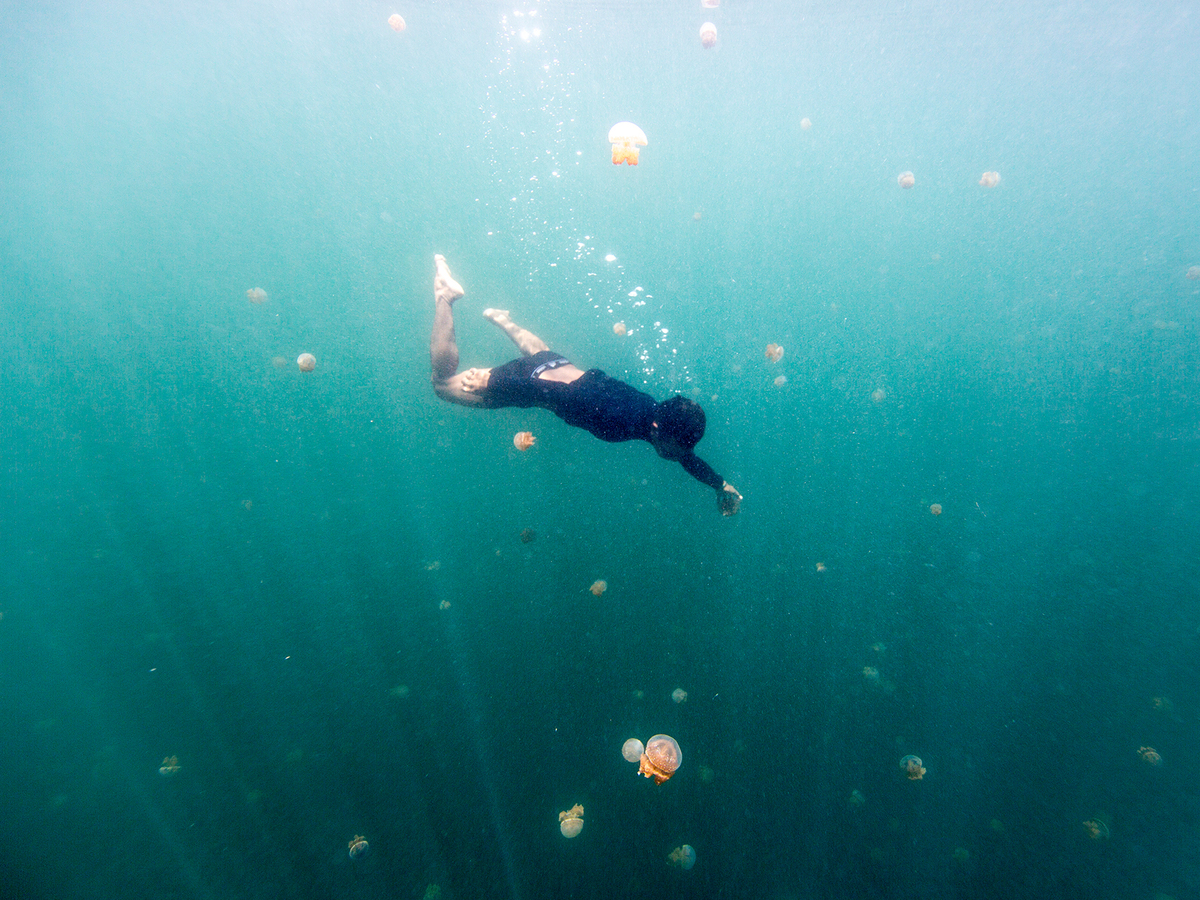 The Bajau are adept free divers. Some of them spend up to five hours a day under water, searching for food and other creatures for trade.

He adds, "The conclusions reached would be much strengthened if this [genetic] pattern is found to be regionally widespread and correlates with [people's] time, depth and degree of reliance on sea resources obtained through free diving."

In the future, Nielsen hopes to confirm that levels of thyroid hormone are indeed elevated in Bajau and that their red blood cell concentrations change when diving.

Nielsen says that the Bajau diving lifestyle is "dying out" — for several reasons — and that spending such a long amount of time diving is more and more unusual.

They've switched from making their boats using a light wood (from a now endangered tree) to a heavier wood, explains Ilardo. These boats need engines, which means the Bajau need money to buy fuel. "This contributes to a cycle where the nomadic, diving-based lifestyle is no longer feasible," Ilardo says.

What's more, "there is tremendous pressure on the Bajau to provide the majority of seafood for that region of Asia," Ilardo says. As a result, they're moving from traditional diving to more commercial ways to catch fish.

The Bajau are also giving up the nomadic lifestyle — there are "stigmas associated with being nomadic," says Ilardo — and becoming more settling down in one place. This change leads to being "accepted by local cultures. This in turn leads to government aid, education, citizenship."

Ilardo has seen estimates that put the remaining Bajau at one million. Jaya Bakti, the Bajau village on the island of Sulawesi in Indonesia where spleen size was measured, has a population of about 5,000.

So is it possible that this unique genetic trait could just disappear?

"If the Bajau population stops diving completely but nothing else changes, they will keep their big spleens for an indefinite amount of time," Ilardo says. "There is no force of natural selection acting to 'undo' the big spleen adaptation."

If they were to mix with other populations, genetics would determine whether their children would inherit the adaptation.

The researchers say that studying how people adapt to extreme environments could have long-term benefits for medical care — in this case, how people deal with sudden drops in oxygen levels.