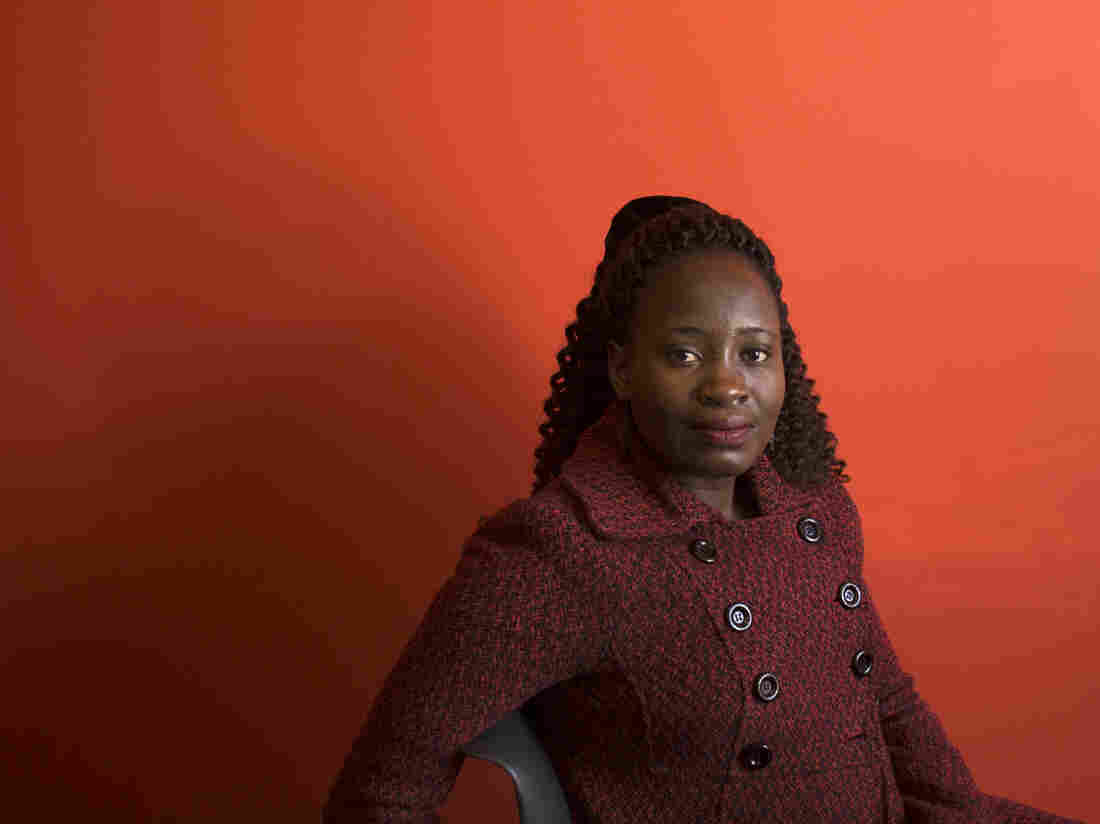 Melvine Ouyo is a reproductive health nurse at Family Health Options Kenya. She visited Washington, D.C., to discuss how the clinic has lost funding because it would not agree to the terms of President Trump's executive order banning U.S. aid to any health organization in another country that provides, advocates or makes referrals for abortions. Emily Matthews/NPR hide caption 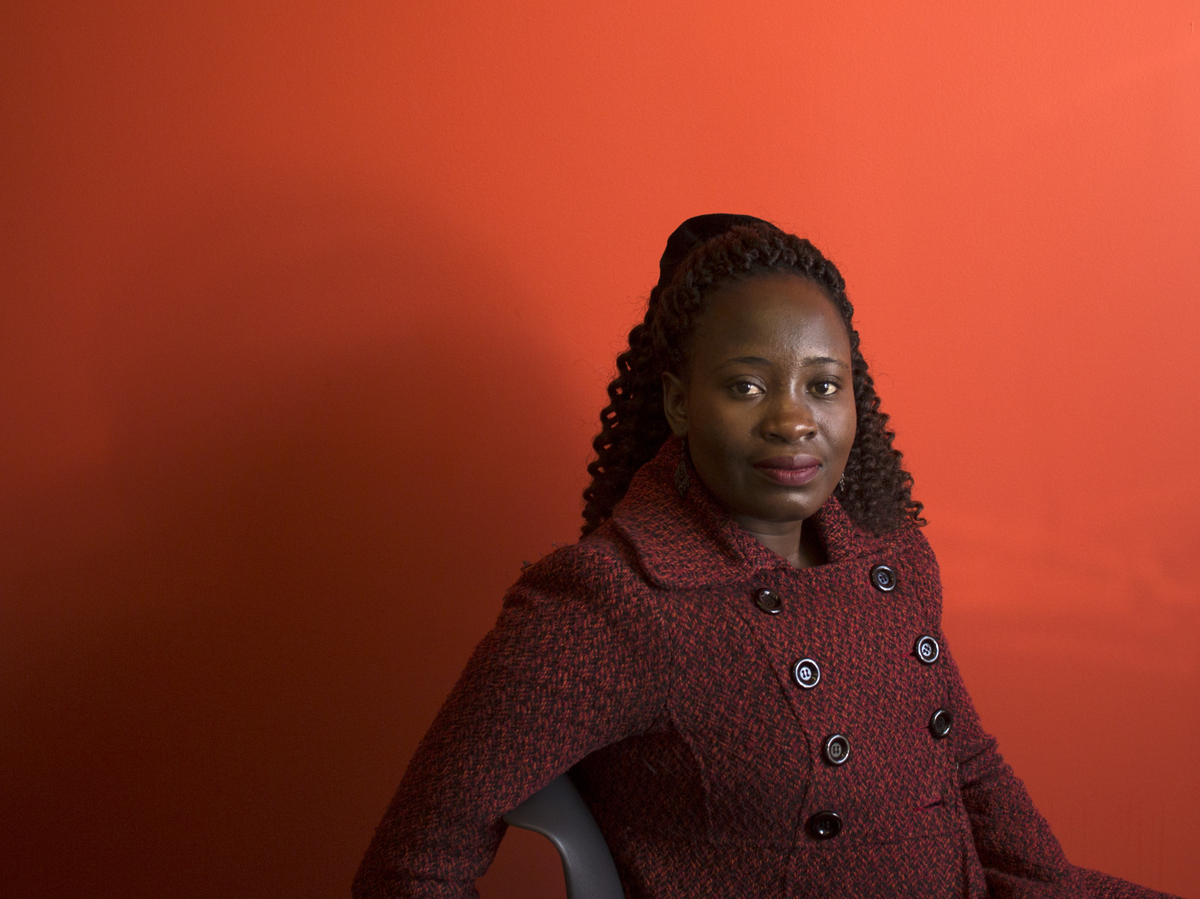 Melvine Ouyo is a reproductive health nurse at Family Health Options Kenya. She visited Washington, D.C., to discuss how the clinic has lost funding because it would not agree to the terms of President Trump's executive order banning U.S. aid to any health organization in another country that provides, advocates or makes referrals for abortions.

On Jan. 23, 2017, President Trump signed an executive order that bans U.S. aid to any health organization in another country that provides, advocates or makes referrals for abortions.

The full impact of the order won't be felt until September. That's when the U.S. government fiscal year comes to an end. At that point, every international organization that does not comply with the order will be excluded from U.S. funding, says Marjorie Newman-Williams, president of Marie Stopes International, an organization that provides contraception and safe abortion in dozens of countries.

But health groups that aren't complying with the policy are already feeling the effects. The U.S. has pulled the plug on funds that had been previously allocated but not yet spent prior to the Trump order. "Marie Stopes can talk about its own sad stories of programs that have had to close," says Newman-Williams. Its outreach services, which were funded by USAID in countries like Uganda, Kenya, Senegal, Madagascar, Pakistan and Myanmar, have already stopped, she says.

That's the case for Family Health Options Kenya, Kenya's oldest provider of sexual and reproductive health services. FHOK disagreed with the terms of the "Mexico City" policy, which has been reinstated by every Republican president since Ronald Reagan first issued it.

In October 2017, $640,000 that was in a four-year pipeline for ongoing work was lost because the funds, which came from the President's Emergency Plan for AIDS Relief, were discontinued. Since then, $1.56 million more has been lost because FHOK was unable to renew project funds and bid for future U.S. funding, says Amos Simpano, director of clinical services. FHOK says that amounts to nearly 60 percent of the organization's funding.

On a visit to Washington, D.C., this spring, Melvine Ouyo, an FHOK reproductive health nurse, sat down with NPR to discuss the effects of losing that much funding. One of the organization's 14 clinics has closed down, and a clinic in Kibera, Nairobi's largest slum and where Ouyo works, could be next. FHOK has also ceased outreach services to underprivileged communities, which it estimates has affected more than 76,000 women and young girls to date.

Though abortion is legal under Kenyan law if the health or well-being of the mother is at risk, some pregnant women and girls who now lack access to medical care because of the funding cuts are resorting to unsafe measures out of desperation. They visit "curtain clinics," she says — secret spaces run by people who aren't nurses or doctors — or use household items like crochet needles to terminate their pregnancies.

The loss of funding has also jeopardized essential services that are unrelated to abortion — like cancer screening of reproductive organs, treatment for HIV, postnatal care and vaccinations for diseases.

The funding policy — called the "global gag rule" by its critics — is meant to discourage abortion. But a Stanford University study makes the case that restricting family planning funds can lead to more abortions. Researchers analyzed survey data in 20 African countries between 1994 and 2008 and found that rates of induced abortions rose sharply in countries that were most affected by the rule. A report by Population Action International found that when the policy was in effect between 1984 and 1992, "there was no evidence that the policy reduced the incidence of abortion."

Ouyo was in the United States to attend Capitol Hill Days, a conference around reproductive rights that is hosted by Population Connection Action Fund. When she sat down with NPR, she said the decision not to comply with the Trump order was made by the International Planned Parenthood Federation, of which FHOK is a member organization. "It was a worthwhile decision, though it has negative consequences," she says.

Tell me about how this has affected the clinic you work at in Kibera.

We had to lay off six staff [out of 10] just to be able to sustain the clinic. We also have not been able to acquire any [new] equipment in the past several months because of a lack of funding. We have not improved any of our equipment [such as autoclaving machines used to sterilize equipment]. It means we are still just operating from where we were last year.

What health problems do you see going unaddressed?

Because we have not been able to provide outreach services, which basically serve disadvantaged communities, we cannot provide screening services for HIV and AIDS and be able to initiate treatment for those who test positive, and provide health education [for prevention]. It means that people in these communities will live without any precaution. A child who requires immunization and [whose] parents may not be able to afford transport to facilities [could] get communicable diseases — measles, TB, diphtheria, hepatitis. And if one gets it, they infect another and another in the community.

Who are some of the people that rely on your clinic?

There was a young orphan girl, about 10 years old, who was sleeping at her uncle's [home] after she lost her parents. And the uncle persistently sexually abused her. And when she got pregnant at 13 years, this is a pregnancy from incest, she would not just carry on the pregnancy. So this girl comes to you suicidal. What do you do as a professional? She had already attempted unsafe abortion. She had taken herbs given [to her] by friends. Her friends referred her to us and she was able to access safe abortion services.

With the funding loss, what is FHOK doing to survive?

We have to put a small fee on the services we are providing. It has caused the clients to shy away from seeking care. At the Kibera clinic, we are charging half a dollar, because it is within the slum and we know the clientele we are dealing with. And still, not all will be able to pay. We feel the pain of not being able to provide those services.

Other countries, like the Netherlands, have started raising funds to help international organizations that are suffering because they did not agree to the terms of the Trump order. The Dutch government created a funding initiative called "She Decides" and has raised about $200 million from governments, foundations and philanthropists. Are you receiving funding from elsewhere?

The main alternative that FHOK started was to start charging the client. We receive a reduced grant [by about $99,000] from the International Planned Parenthood Foundation.

What does it feel like for you right now?

It feels painful knowing that someone would benefit from your education, your passion, your career and you cannot do that. It kills your morale.

How do you cope, knowing that your health clinic isn't as effective today?

Just like the previous years when we had the global gag order, I still have this hope that I have to hold on, to press on. I am hopeful that someone will hear my cry.