Accessibility links
India's Efforts To Reform Its Rape Laws Are Praised — And Criticized : Goats and Soda There are concerns that the new measures might not be easy to implement — or could even backfire. 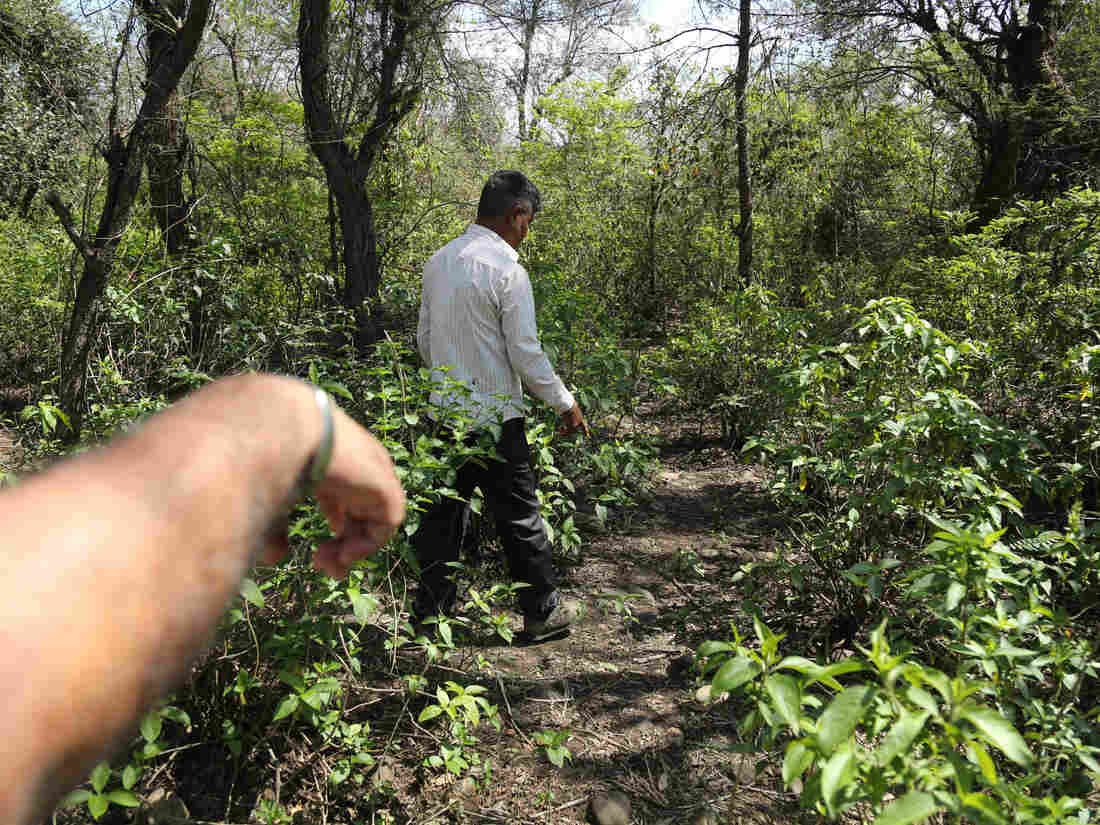 Men walk near the site where the body of an 8-year-old girl who was raped and murdered was found in January. Channi Anand/AP hide caption 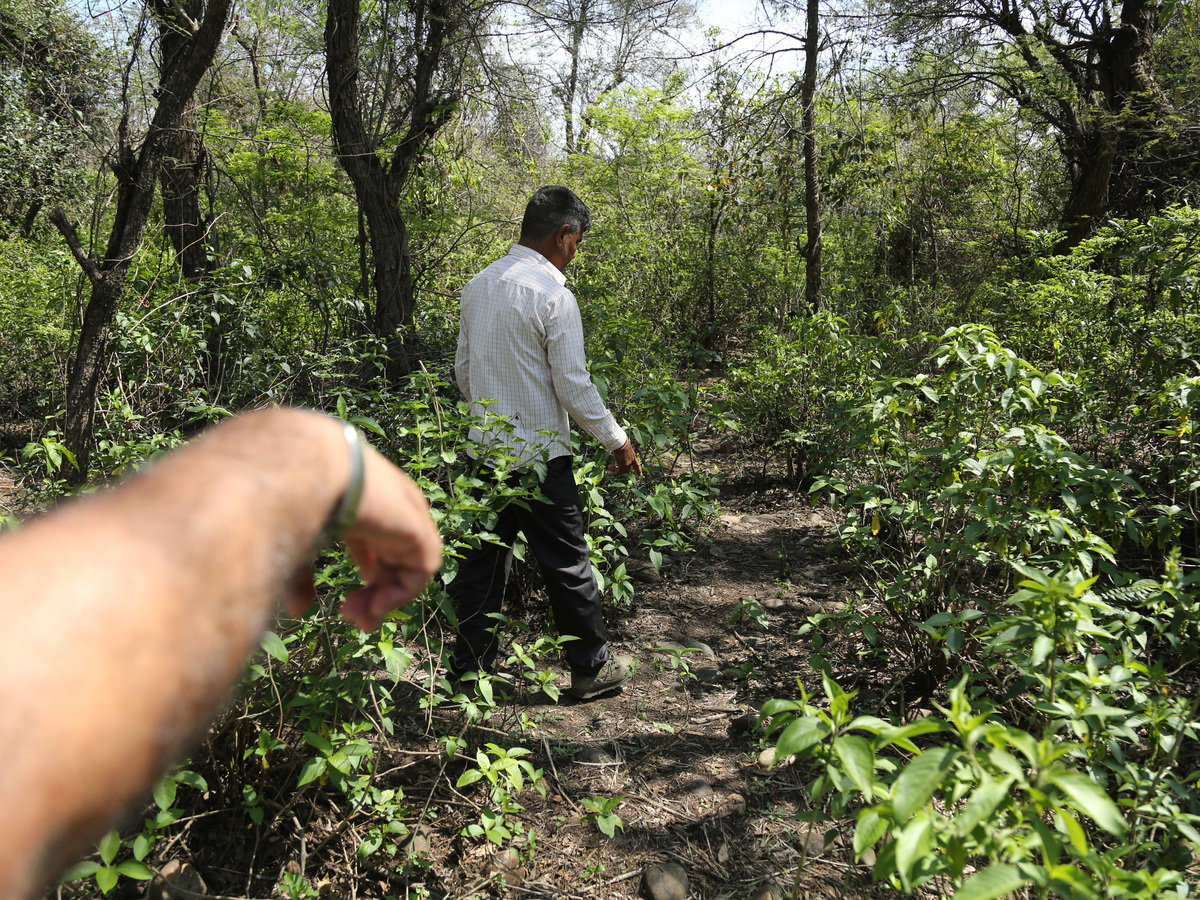 Men walk near the site where the body of an 8-year-old girl who was raped and murdered was found in January.

On May 2, two girls, ages 10 and 12, appeared in court to testify against a man they said had raped them repeatedly at an orphanage in the Indian city of Hyderabad.

They had been rescued by the police and were sent to live in a shelter run by Prajwala, an organization that has supported rape victims in India since 1996, giving them a place to live on its campus and the skills to help them rebuild their lives.

Now seeking justice, the young girls waited in court an entire day only to learn that their case had been adjourned — for the third time.

Lawyers and activists working with child abuse victims say these kinds of delays are common in India's overworked judicial system.

India is trying to makes its judicial system more efficient — and to set stronger penalties for convicted rapists. New laws have been passed. But there are concerns that these ordinances will be difficult to implement or could even backfire.

The kind of delay the two girls faced simply should not happen. A law called POCSO — the Protection of Children from Sexual Offences Act — calls for the establishment of new child-friendly courts and better procedures in existing courts so young victims wouldn't have to make numerous appearances in order to testify. The act came into effect in 2012.

The aim of POCSO was to offer better protection for all women — in particular for minors. According to statistics from India's National Crime Records Bureau, four out of 10 rape victims are minors. In 2016, only 6,626 — nearly a tenth of its 64,138 pending cases of child rape went to trial. Of those that did, the conviction rate was only 28.2 percent.

But, as in the case of the young girls from Prajwala, adjournments are still very prevalent, says Krishnan.

This year, in the wake of the rape and murder of an 8-year-old girl, there is a growing public effort to call for stiffer laws and severe punishments. And more changes are afoot.

How The Rape And Murder Of An 8-Year-Old Girl Sparked Protests Across India April 17, 2018

On April 21, Prime Minister Narendra Modi responded to public pressure for tougher rape laws and passed an ordinance to amend the POCSO law.

One major revision is that anyone convicted of raping a child 12 or younger could get the death penalty. In the case of a rape of a minor below the age of 16, the punishment is now a 20-year sentence or life imprisonment, compared with a 10-year maximum sentence before.

In addition, the prime minister's new ordinance calls for fast-tracking all rape trials so there would be a judgment in six months — a time frame that activists believe is rather ambitious given the sheer number of cases pending in court.

Despite the seeming progress, activists raise a number of concerns.

In many of the cases involving sexual offenses against minors, Karuna Nundy, a lawyer who tries cases in India's Supreme Court, says the rapist is often a known assailant — in some cases, even a close relative.

According to the 2016 NCRB data, in 94.8 percent of the rape cases, the rapists were not strangers. They were friends, neighbors, people who were known to the children.

"By instituting the death penalty, the reporting of such crimes may decline," says Nundy. A day after the ordinance was passed, Bharti Ali, the co-director of HAQ: Centre for Child Rights, a Delhi-based nongovernmental organization, contended with one such case: "I was dealing with a woman who would soon testify against her husband. He was under trial for raping their minor daughter."

The woman, she says, was worried about whether the death penalty would come into effect. While she wanted her husband punished, she didn't want him to be put to death.

"It isn't easy for victims to get past the social stigma and report rape in India," says Ali. "When they do report it, the [prospect of the] death penalty shouldn't cause them to reconsider. The death penalty can also induce a rapist to kill his victim, because he would not want his victim to testify against him in court."

Fast-tracking could be slow going

The new amendment has proposed fast-tracking of rape cases. But India does not have the infrastructure to make this an easy fix, say judicial observers.

"We still have very few courts dedicated exclusively for child victims of sexual assault," says Sunitha Krishnan, who co-founded Prajwala and who was raped when she was 15 years old. "In most cities, courts only have designated times for children to testify."

As a result, cases can back up, creating further delays. "Investing in and creating this infrastructure should be the priority," says Krishnan. "Unless we recruit and train judicial officers and redress issues pertaining to the shortage of judicial officers, nothing will change."

Then there is the matter of evidence. Convictions in rape cases hinge on DNA evidence from forensic scientific labs. There are only six of these labs in all of India, and only three are equipped for DNA testing. Thousands of cases are still pending at these labs across the country. "In such a situation, the victim would have to wait at least two years to get the report, making it impossible to fast track their cases," says Bharti Ali.

On the same day he amended the law, Modi also announced the government's intention to set up a national sex offender registry to register and track rapists.

This proposal is being hotly debated in India. While activists like Krishnan feel that it will help monitor sexual offenders and prevent crime, Ali is a critic: "Once you brand someone a rapist, it can prevent them from ever wanting to reform or reintegrate into society," she says.

Meanwhile, the two young girls at Prajwala, like thousands of others across the country, are still waiting for justice.

Kamala Thiagarajan is a freelance journalist based in Madurai, India. Her work has appeared in The International New York Times, BBC Travel and Forbes India. You can follow her @kamal_t.

A previous version of this story incorrectly said that under a new law, anyone convicted of raping a child 12 or younger would get the death penalty. It is not an automatic sentence. In addition, the story also incorrectly linked the Protection of Children from Sexual Offences Act to the rape and death of 21-year-old student on a bus.