Accessibility links
Namibia's Herero Faced A German 'Extermination Order.' Now They Want Justice : Goats and Soda Twice the targets of systematic racism — an "extermination order" by German colonizers, then brutal segregation by South Africa — they're still fighting to regain what they lost.

Why The Herero Of Namibia Are Suing Germany For Reparations

Why The Herero Of Namibia Are Suing Germany For Reparations 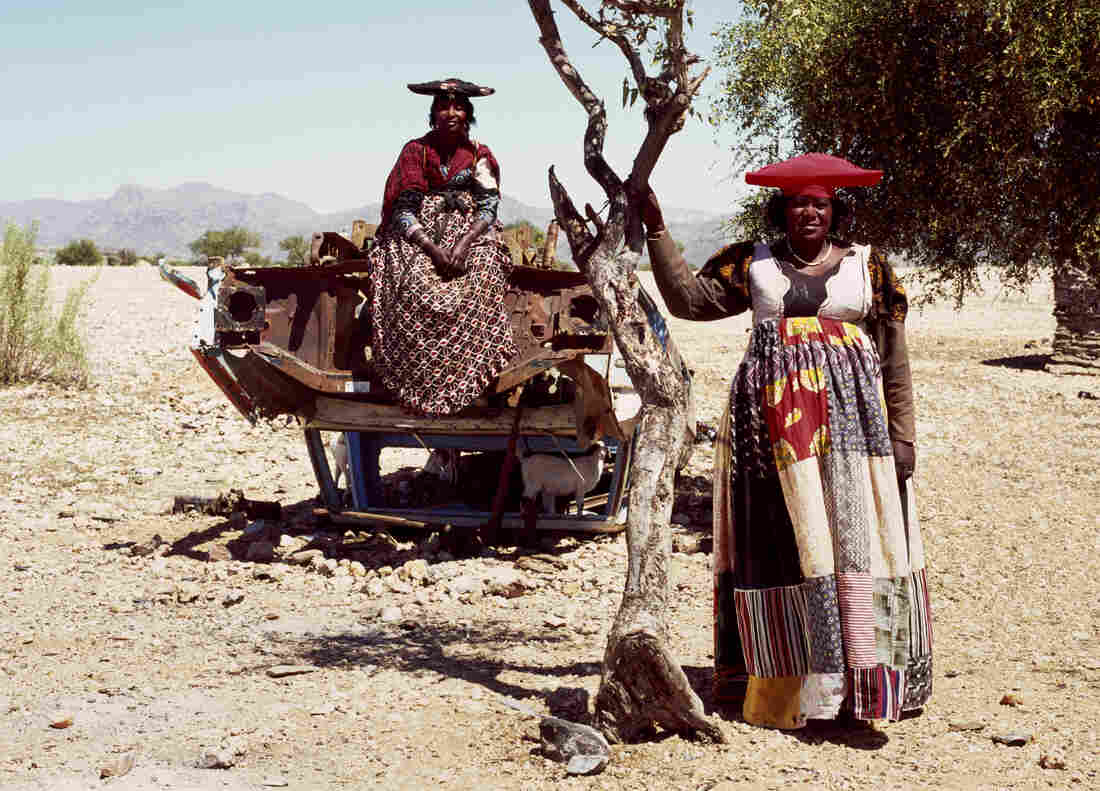 A quarter million Herero are estimated to live in Namibia today, with the population growing in recent years. Harry Hook/Getty Images hide caption 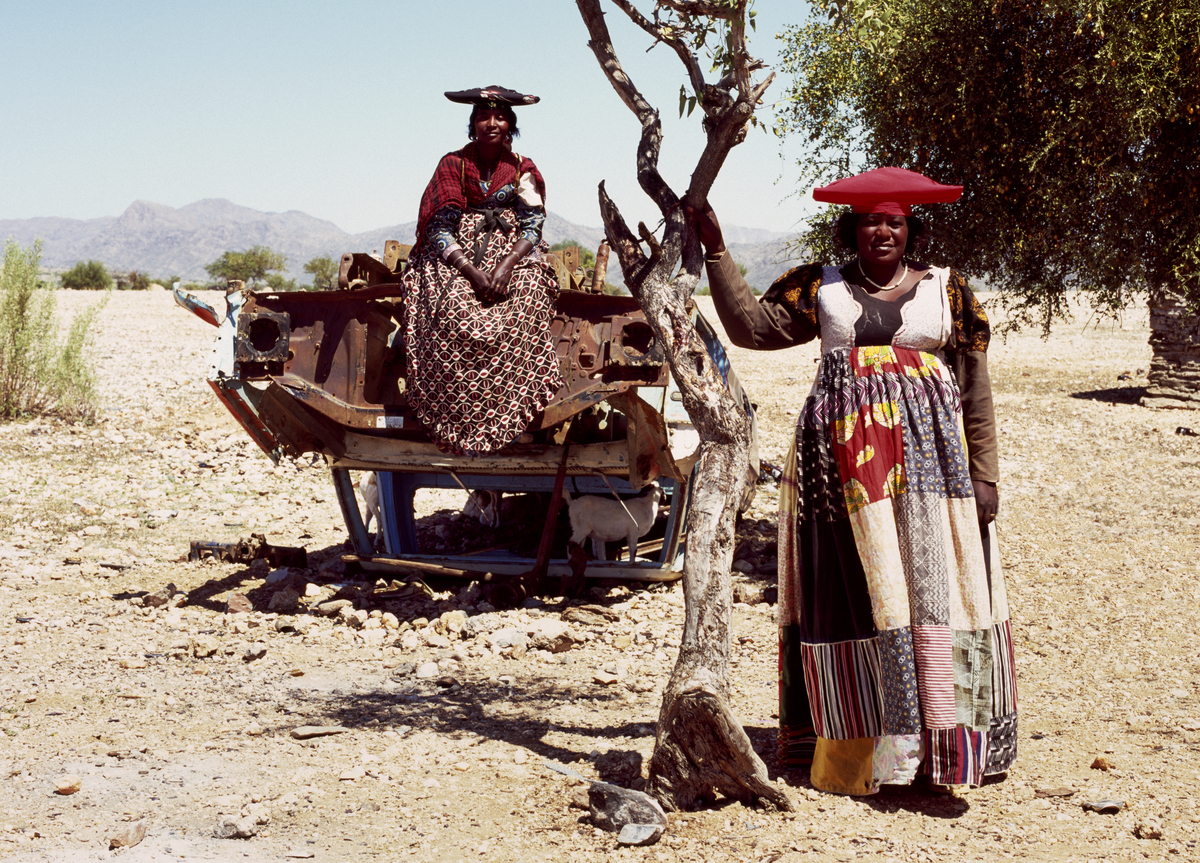 A quarter million Herero are estimated to live in Namibia today, with the population growing in recent years.

Mbakumua Hengari grew up in the 1970s on a farm in southern Africa, in what is today the nation of Namibia. The arid soil around his family's homestead was sandy and grassy, a poor fit for staple crops, so he and seven siblings subsisted on a modest herd of cattle, sheep and goats.

Hengari blames systematic racism for his family's poverty — and he and his people, the Herero, are still fighting for justice.

The first crisis came in 1904. German colonists waged a brutal war of extermination — now considered a precursor to the Holocaust.

Then came apartheid. A half century after the Herero genocide, the all-white government of South Africa extended its brutal policies of segregation to Namibia. Both periods etched poverty and inequality into Namibian society — and decades after the country gained independence, the Herero are still fighting to regain what they once had.

For Hengari, it is a deeply personal fight. Cattle farming ran in the family, but the land on which they lived did not. Because Hengari is Herero, an ethnic group that shares the Otjiherero language, his ancestors had been relocated to an inhospitable reserve on the edge of the Kalahari Desert. They were kept separate from other Namibians. "We were almost exclusively Otjiherero-speaking," Hengari said of his community. "Because of the system of apartheid."

Hengari sees a clear line of continuity connecting past and present wrongs. "The current situation in which we find ourselves was forced upon us by the actions of colonialists," he said in a phone interview. In the 19th century, German missionaries, settlers and soldiers began to arrive in Namibia, which they called German South West Africa. They seized the best land from ethnic groups like the Herero and Nama and even made it a capital crime for Herero people to own cattle, effectively outlawing their way of life.

"For a traditionally nomadic people like the Herero, if you tell them that you will kill them if you find them with livestock, it was the start of a systematic process perpetuating an environment of poverty," Hengari said, a hint of anger in his voice. "They had to take everything that these people lived on."

In 1904, the Herero began to fight back, and the colonists retaliated savagely. In what historians now consider a genocide that long predated the Holocaust, a German colonial general issued an "extermination order." Soldiers forced Herero people into the desert, poisoned wells and confined thousands in concentration camps. Later, they used the same tactics on the Nama. Some 65,000 Herero died, mostly of starvation, dehydration and disease, reducing one of the region's main ethnic groups to a population in the low tens of thousands. During the violence, many fled the country. 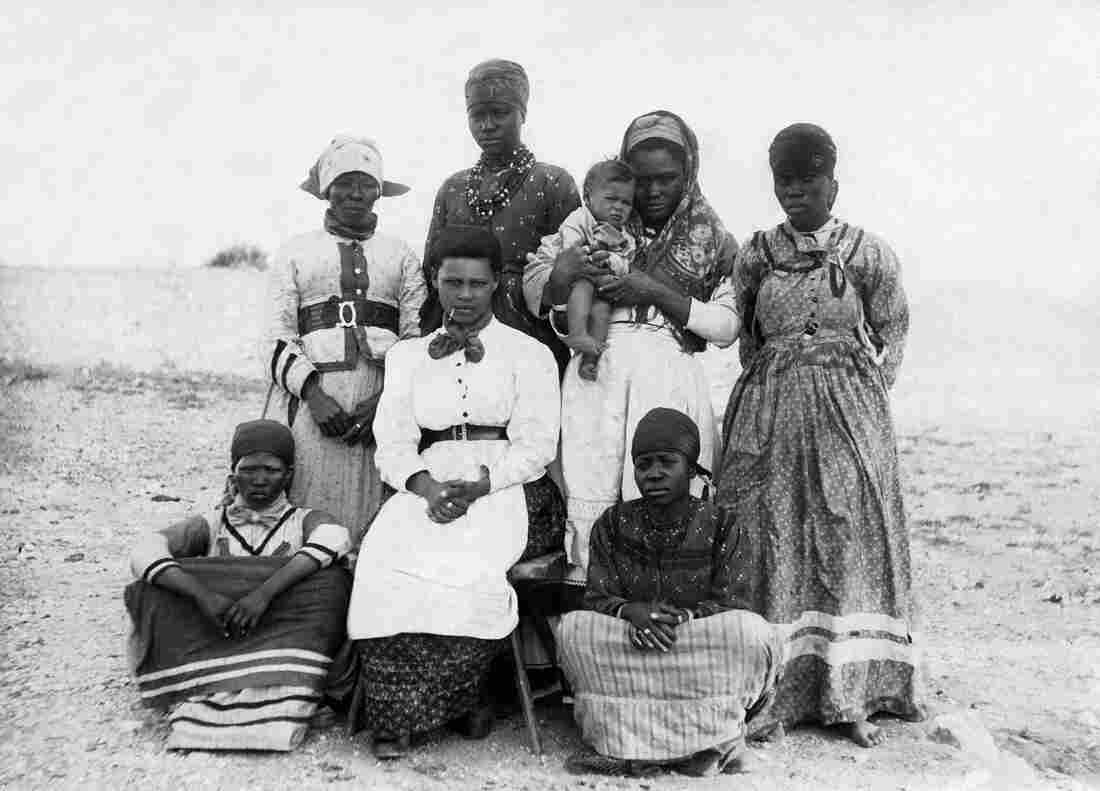 A photo of Herero women was published by Berliner Illustrirte Zeitung in 1904, the year the Herero launched an uprising against German colonists, leading to an "extermination" order for the ethnic group. ullstein bild/Getty Images hide caption 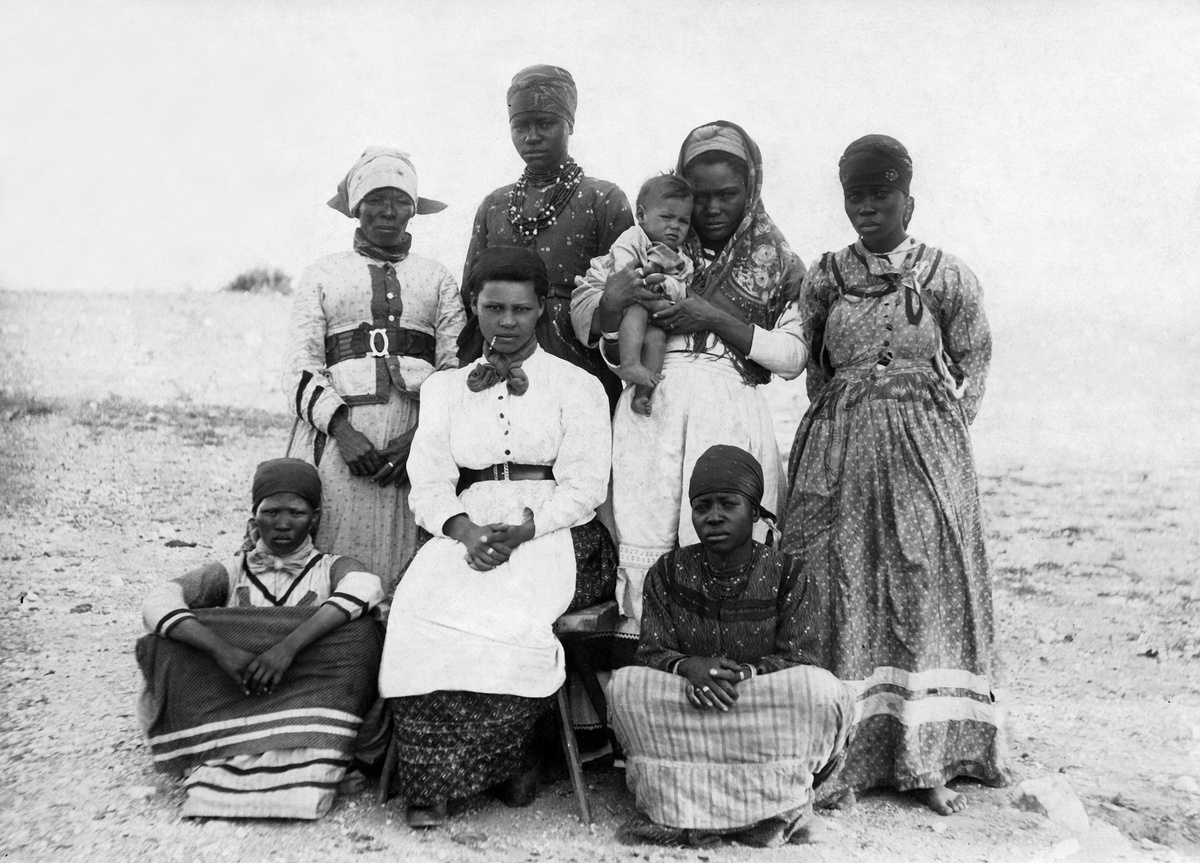 A photo of Herero women was published by Berliner Illustrirte Zeitung in 1904, the year the Herero launched an uprising against German colonists, leading to an "extermination" order for the ethnic group.

Stephen RauRau, a lawyer from Botswana, is the descendant of Herero refugees. His ancestors once owned land, but they started over in neighboring Botswana during the early 20th century. "If it had not been for the genocide, we would own some pieces of land," RauRau said. Though the Herero have a sizable community in Botswana, they see a lasting injustice in the fate of the lands they left. "I would say that the majority of the land is owned by former colonizers," RauRau said.

Perhaps a quarter million Herero live in Namibia today. For many, ethnic identity is everything. "It is the root of our being," Nokokure Veii, a Herero activist and secretary of the Ovaherero Genocide Foundation, wrote in an email. She regularly dons a traditional dress and hat for Herero gatherings, like weddings, funerals, naming ceremonies for newborns and commemorations of fallen Herero chiefs.

The Herero population has grown in recent years, Veii said, but not enough to ensure a change in the status quo. "We were reduced to a mere insignificant minority in the country of our birth," Veii said. According to the World Bank, Namibia, like post-apartheid South Africa, still suffers from some of the highest income inequality in the world. Many of the businesses in Windhoek, Namibia's capital, are owned by white Namibians.

This helps explain why, in more than a dozen conversations with Herero activists in Namibia and the diaspora, three issues came up again and again.

The first is land. The Herero want preferential access to the land that was taken from them. But their numbers — less than 10 percent of the population — are too low to give them sway in the Namibian government, Veii said.

The second is reparations. In recent years, Germany has started to take responsibility for colonial genocide and has offered development aid to Namibia. But many Herero and Nama have called for direct reparations, of the sort paid to Holocaust survivors after World War II. They say the descendants of victims, not the nation of Namibia, should lead negotiations with Germany.

"Development in the regions we live in is slow and almost nonexistent," Veii said. "This poverty is generational, and unless we break the chain through reparations from the German government, the status quo will remain."

That battle has moved to the U.S. thanks to a 2017 lawsuit. Under the Alien Tort Statute, an unusual law that has allowed foreigners to sue perpetrators of human rights violations, the Herero are challenging Germany in U.S. federal court.

The third issue might be described as truth and reconciliation. When apartheid ended in the early 1990s, South Africa empowered victims to publicly challenge their perpetrators. But Namibia did not.

"South Africa took a very bold step," Hengari said, "by creating a Truth Commission where people would come vent out and point fingers and, through that process, find a mechanism of trying to level out things."

In Namibia, RauRau added, this effort must come from within the Herero community. "We must write our own history," he said. "Our books must be published endlessly, so that our children can have pride in ourselves."

The Herero refuse to become a forgotten people. Theirs is a story of patient persistence.

After attending college in Minnesota, Hengari returned to Namibia as a participant in the liberation struggle and settled on a farm not far from the reserve where he grew up.

But he does not yet feel content. There is work to do. "We all need to join hands and join in if we want to see a change in the lot of our people," he said. "There is no way that one can feel content at this stage. And there is no clear path, or plan, to get out of this."

Daniel A. Gross is an editor and reporter in New York City. He has written for The Guardian, The Washington Post and the website of The New Yorker. Some of his audio stories have aired on 99% Invisible, Reveal and the BBC World Service. Contact him on Twitter at @readwriteradio.