Accessibility links
Italian Police Go After Nigerian Gang For Sex Trafficking : Goats and Soda After years of battling the mafia, the authorities are now going after gangs that force migrants from Nigeria into sex work. 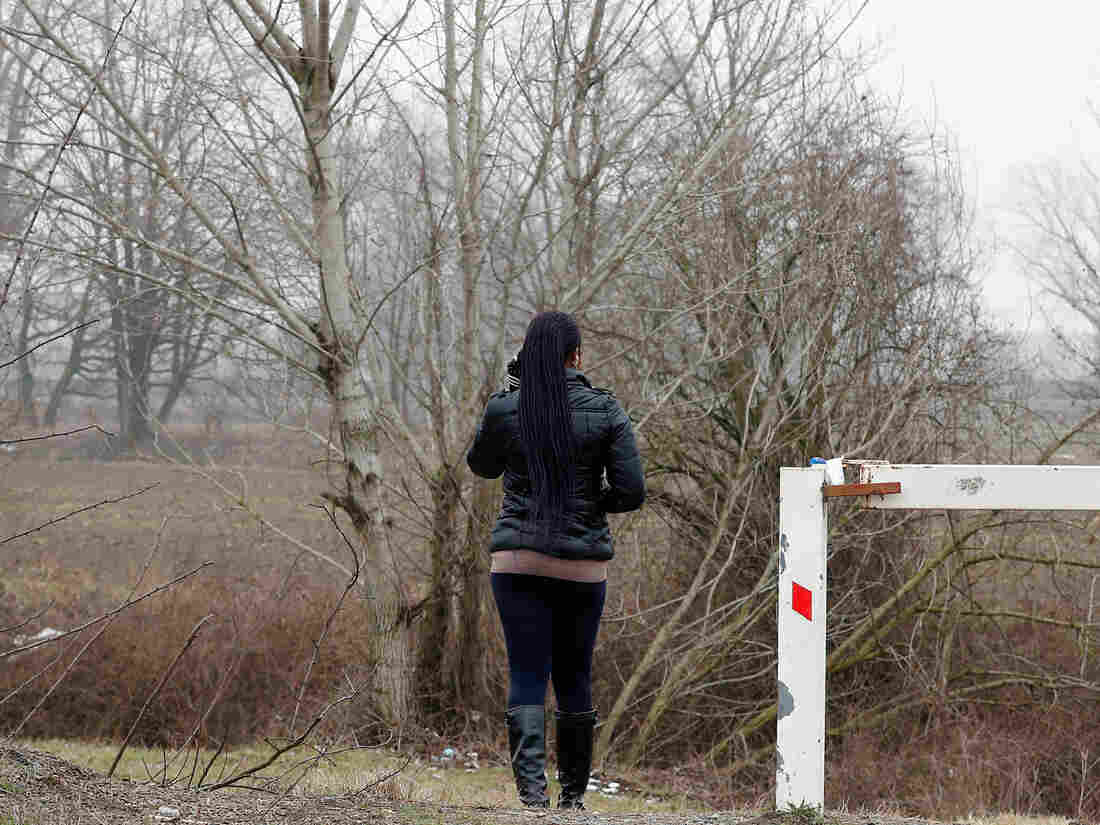 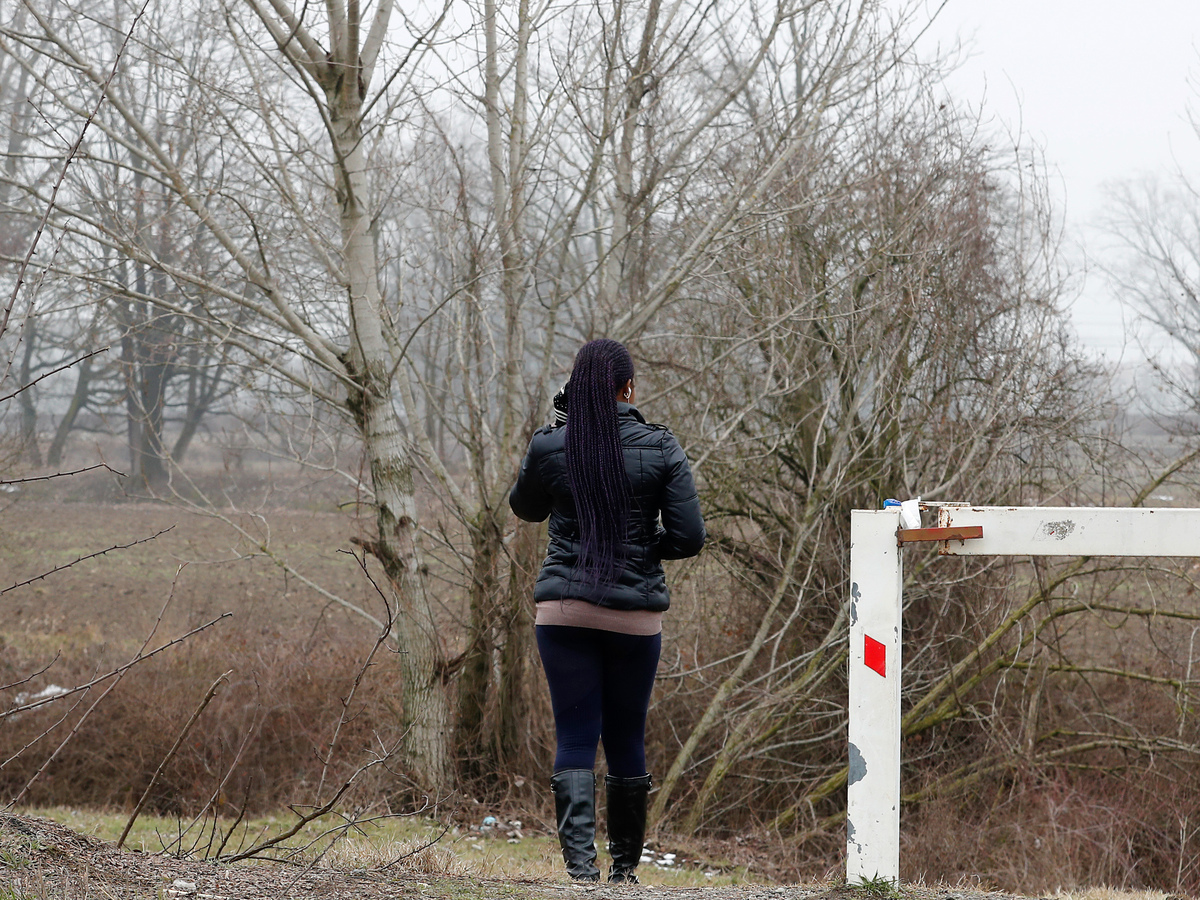 A Nigerian sex worker in Italy waits for clients.

It's a frigid spring day in the outskirts of Catania, Sicily, in Italy. On a narrow highway winding through a landscape of light industry and slumbering vineyards, trucks and Lycra-bound cyclists whiz past a dozen or so sex workers waiting for clients on the side of the road.

Many of the women are from Nigeria. One pair, dressed in matching short, curly wigs, red turtlenecks and fishnets, sit on plastic chairs, listening to a tinny rendition of Celine Dion's "My Heart Will Go On" on a cell phone. Another woman stands alone, hovering close to a fire she's made to keep warm.

There's trash everywhere — flattened water bottles, discarded clothes and mangled plastic bags — marking the long, empty hours these women, and women before them, have counted on this desolate stretch of road.

So when two Italian social workers approach for a chat, most of the women welcome the company. The Italians, who work for a nongovernmental group called Associazione Penelope in Catania, come here regularly to hand out their organization's phone number and tell the sex workers where they can see a free doctor, talk to a lawyer or go for Italian lessons.

One woman, wearing a bright pink wig, is fed up with this kind of advice.

"We don't need school. We need documents, and we need work," she says in exasperation. "We know that this work isn't good. We know that. But we just need work."

Nigerian women have worked as sex workers in Italy since the late 1980s. They migrated north on promises of good jobs in factories and farms but ended up on the streets. In recent years there has been a dramatic rise in the number of women that authorities fear are being trafficked into Italy for sex work, mostly from Nigeria. The International Organization for Migration (IOM) estimates 80 percent of the Nigerian women arriving in Italy — which spiked from 1,454 in 2014 to 11,009 in 2016 — are potential trafficking victims, and more and more are minors.

To identify trafficking victims, IOM teams try to speak with arriving migrants at ports in Italy and listen for "indicators" that might suggest a woman has been trafficked. Where she is from, her age and her traveling companions can often be signs of trafficking.

After interviewing several trafficking victims in Italy and Nigeria, I learned that many of the women's stories start in the same place: Edo State in southern Nigeria, not far from the country's oil-rich delta, where a friend of the family offers them a good job in Europe. They are often taken to a traditional "voodoo" or "juju" priest before leaving, who makes them swear to remain loyal to the person helping them leave the country. They leave Nigeria by bus and travel in a small group through the desert of Niger and into Libya.

For some women, the exploitation starts there, where they are hidden in compounds of African migrants and forced into sex work under threat of violence before being packed into a small boat to cross the Mediterranean. For others, it isn't until they reach Italy and contact the person who's supposed to help them find work. Then they learn they "owe" tens of thousands of euros for the journey and will have to work as sex workers to pay it off.

IOM and groups like Associazione Penelope have been working in Italy to identify and help trafficking victims, but when hundreds of migrants arrive on the same boat, it can be difficult to screen everyone in a short window of time.

"We cannot reach everybody," Carlotta Santarossa, a project manager with IOM, said in Rome last year. "The numbers are too high. It's really a challenge."

Once the women leave Italy's migrant arrival centers and are locked into the underground criminal networks, it is even harder to extract them.

Now Italian prosecutors and police who have spent years battling Italian organized crime are going after the Nigerian gangs in Italy that have been driving this growing sex trade.

These groups, who have roots in Nigeria, expanded in Italy as the number of migrants started increasing, says Cesare Sirignano, a magistrate at the National Anti-Mafia Directorate in Rome. Nigerian criminal networks have as many as 1,500 members across the country, he says, and in some locations, they even pay a cut to the Italian mafia to allow them to do business on their turf.

"The Nigerian organizations have settled in places where [Italian] mafia groups don't have complete control," Sirignano says. "As long as they don't compete, the presence of the Nigerian gangs isn't a problem for the Italian mafia groups."

That's what has happened in Palermo, the storied Sicilian capital on the island's northern coast, where tourists flock to see ancient, winding streets and Arab-influenced architecture and taste the famous chickpea fritters.

In the early 1990s, Palermo was one of the most notorious mafia hubs in Italy, with a bloody war waging between police and the Cosa Nostra. After a crackdown on the organization's leadership, the local government managed to wrest control of the city from the group, weakening the infamous mob.

And some of the same authorities who have been part of the fight against the Cosa Nostra face a new foe: a Nigerian criminal gang called Black Axe that authorities say is involved in the sex trafficking business.

Cosa Nostra's weakened position in Palermo has created an opening for Black Axe, which has been cooperating with the group by paying them a percentage of its earnings — known as a "pizzo" — to run its drug and prostitution businesses.

Former Palermo police officer Carmine Mosca said Black Axe had become "quite powerful," particularly in the ancient neighborhood of Ballarò that has been a long-time mafia stronghold.

"We have shut down several houses ... most of them rundown, some of them entire old buildings in bad shape in Ballarò ... where these girls would be forced into prostitution," Mosca says. He said up to ten women were being held in each of the houses, including underage girls.

Italy's long history with the mafia has made some cities more susceptible to organized crime, helping Black Axe and other foreign groups establish themselves, explains Sirignano in Rome.

But it has also given the authorities tools to fight the newcomers. In 2016, Palermo authorities recognized Black Axe as a mafia group, says prosecutor Calogero Ferrara, allowing his office to use an anti-mafia law that makes just associating with a criminal organization a crime.

In 2016, between 15 and 18 members of Black Axe were arrested, on charges including mafia conspiracy, drug trafficking, exploitation of prostitution and violent crimes, Ferrara says.

This year, the number of Nigerians arriving in Italy has decreased dramatically, due in part to the fact that the Libyan coast guard has turned back a third of all migrants trying to depart from its coast. Migrant arrivals to Italy are down by 76 percent in 2018, compared to this time last year.

Some women have already found a way off the streets in Italy. In Palermo, a group of Nigerian women have set up Donne di Benin City, an organization that tries to help women forced into sex work. Osas Egbon, one of the founders, knows that women need another way to make money to be able to leave sex work behind. On a small farm outside the city, Egbon and her colleagues grow vegetables that women can sell in the markets as an alternative income.

"We cannot go to the street and tell them to stop the street work. They will be at home and have nothing to do," Egbon says.

But many women remain stuck in the trade. On the highway outside Catania, the Italian social workers finish up for the day and head back to the car, where they write down notes in a log book: which women were on the road that day, and whether they said they'd come in to their offices in the city.

I ask if they thought the woman in the pink wig would come in.

Chiara Lo Cicero, a 26-year-old cultural mediator who has been working at the NGO for three years, doesn't answer right away. "Yes," she says, eventually. "Maybe."

As we're talking, a small car pulls up to the women, and they jump out of their chairs to try to make a deal.

This report was funded by a grant from the International Reporting Project. Flaminia Giambalvo and Tullio Filippone contributed reporting.

Krista Mahr is a journalist based in Johannesburg, where she has written for The Guardian, The Washington Post, Newsweek and Associated Press. She previously lived in New Delhi where she covered South Asia for Reuters and Time. Contact her on Twitter @kristamahr.