Accessibility links
How GPS Has Become A Tool For Defending Land Rights In Africa : Goats and Soda They have been working the same stretches of river for decades — but have no proof of ownership. Now technology comes to the rescue. 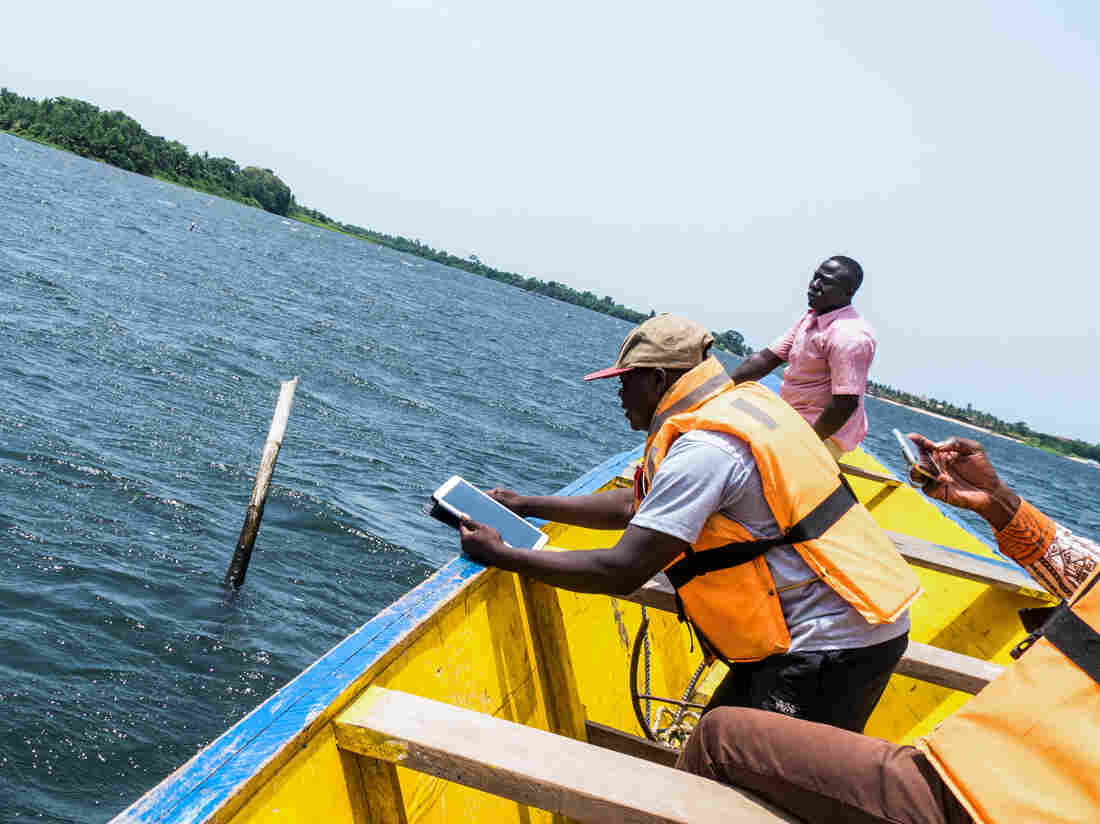 Samuel-Richard Bogobley holds a GPS-enabled tablet to capture the location of one corner of an underwater clam "farm" belonging to Kofi Amatey, in pink, in Ghana's Volta River estuary. Tim McDonnell /for NPR hide caption 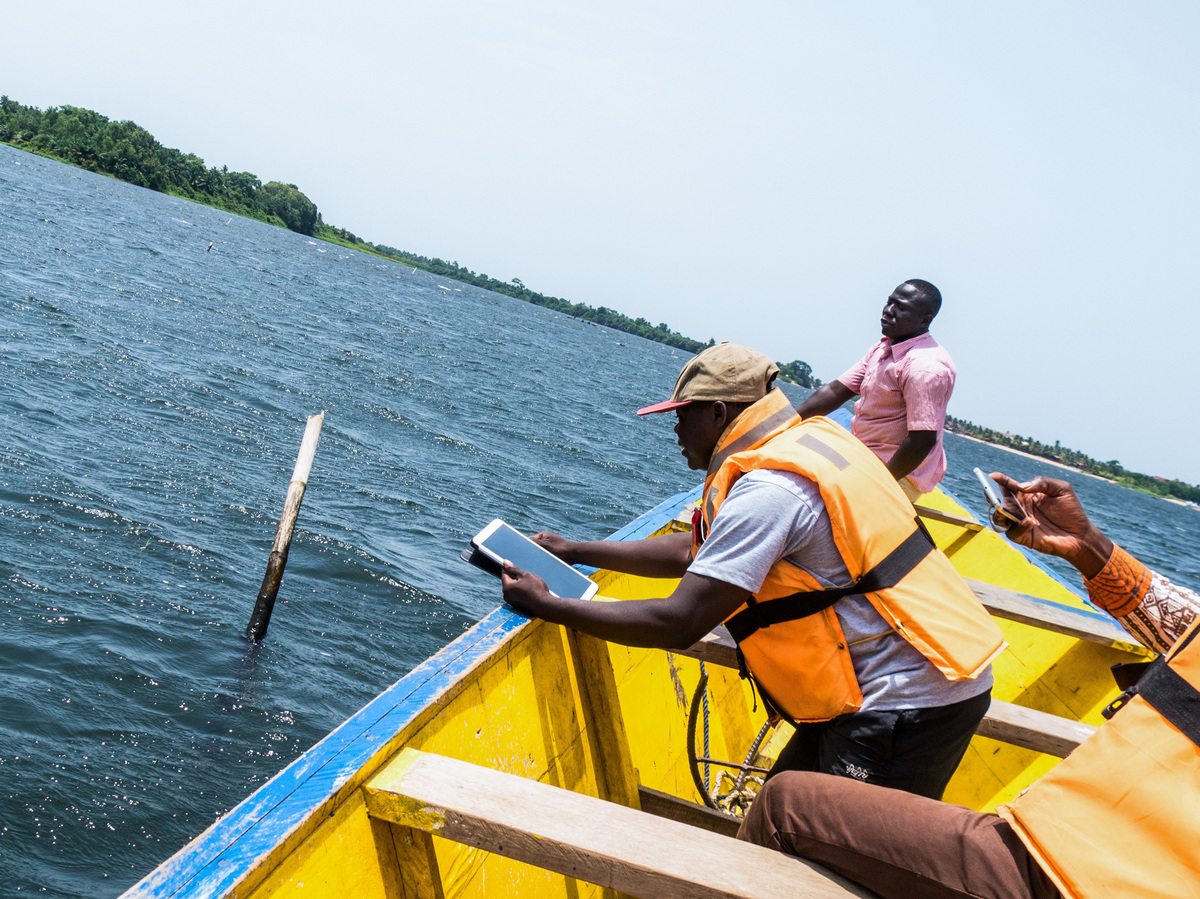 Samuel-Richard Bogobley holds a GPS-enabled tablet to capture the location of one corner of an underwater clam "farm" belonging to Kofi Amatey, in pink, in Ghana's Volta River estuary.

Samuel-Richard Bogobley is wearing a bright orange life vest and leaning precariously over the edge of a fishing canoe on the Volta River estuary, a gorgeous wildlife refuge where Ghana's biggest river meets the Gulf of Guinea.

He's looking for a bamboo rod poking a couple feet above the surface. When he finds it, he holds out a computer tablet and taps the screen. Then he motions for the captain to move the boat forward as he scans the water for the next rod.

It's slow work. But once it's completed, it could pave the way for significant new legal protections for the property rights of marginalized communities across Africa.

"Before you can start to recognize a fishery, you need to have a lot of data," says Bogobley, a researcher with Hen Mpoano, a Ghanaian nonprofit that supports small-scale fishers. "These people don't have any platform to fight for what is theirs."

The Volta River is rich with clams, harvested year-round by a bustling community of several hundred fishermen and women. The meat is packaged for sale across West Africa, while the shells are ground into an additive for whitewash and chicken feed.

The riverbed itself is divided into intricate real-estate parcels, each one an underwater clam "farm" with its own caretaker.

The farms have become a flashpoint in a broader conflict over the land rights of indigenous peoples in Africa: The clam fishers have no legal claim to their farms, and are under increasing pressure as they compete for prime real estate with the booming tourism industry and cope with the impacts of climate change.

In March, Bogobley and his colleagues began mapping out the clam plots with GPS-enabled tablets. It's the latest example of how satellite mapping is being deployed as a key solution to land-rights conflicts across the continent. Experts say it's the first time it's ever been used in a marine setting. 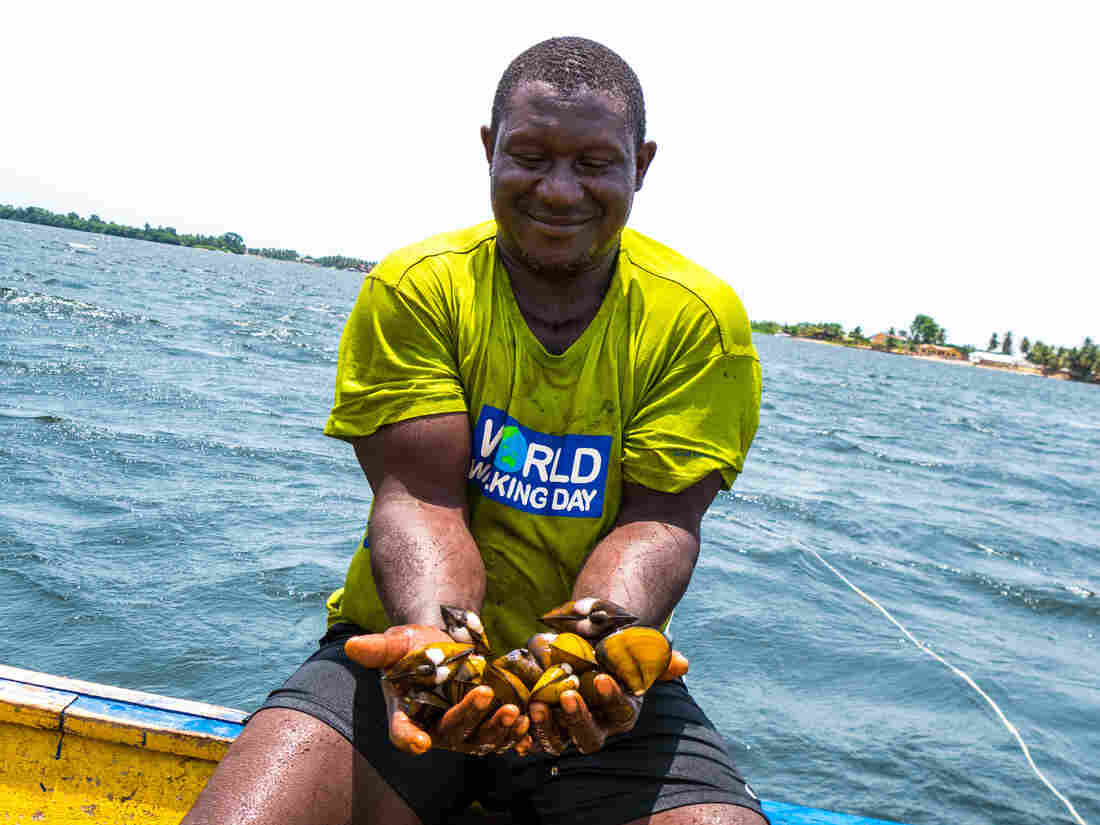 Peter Oklika, a clam digger, with a handful of freshly harvested clams. Oklika was among the first clam diggers in Ghana's Volta River estuary to have his plot mapped with GPS. Tim McDonnell/for NPR hide caption 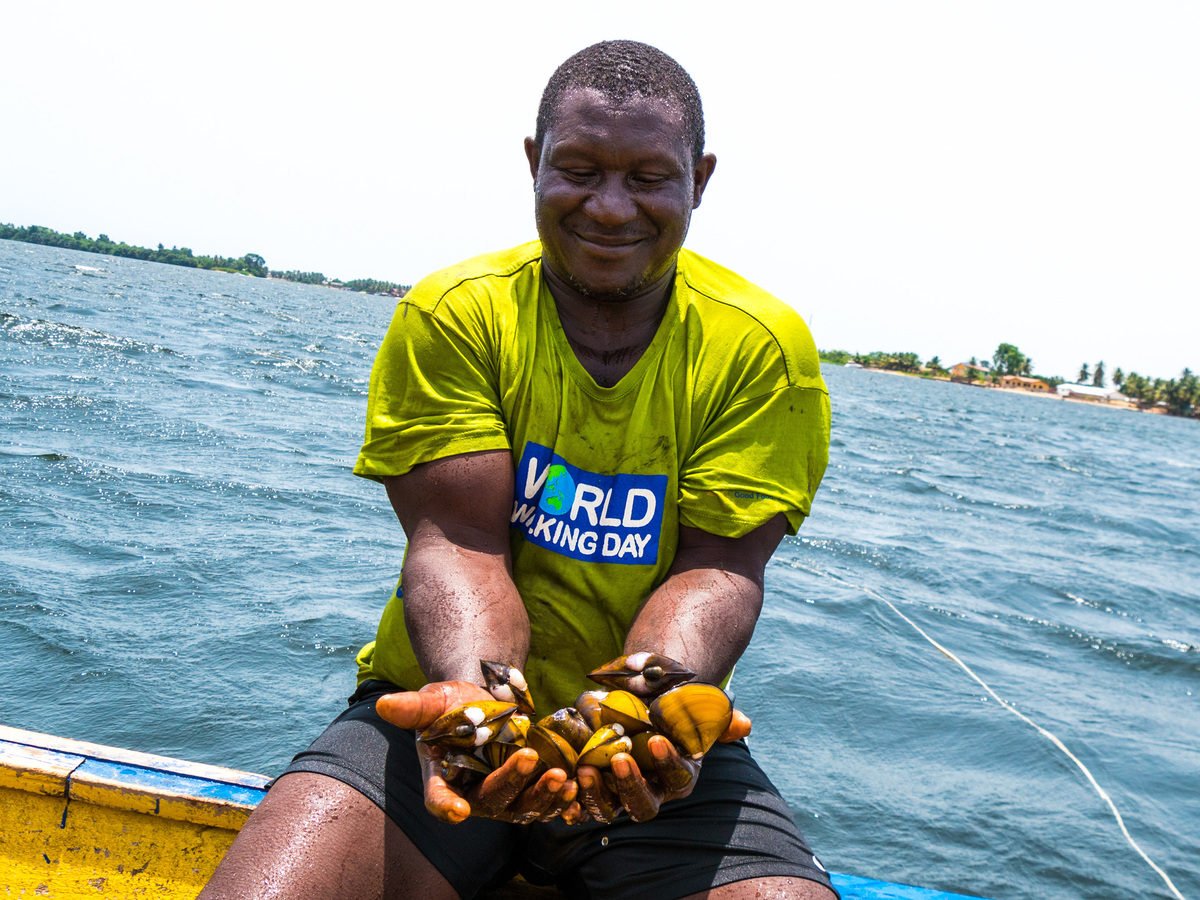 Peter Oklika, a clam digger, with a handful of freshly harvested clams. Oklika was among the first clam diggers in Ghana's Volta River estuary to have his plot mapped with GPS.

Perched on the canoe next to Bogobley is Kofi Amatey, who founded this particular farm in 2005. He's the youngest in a long line of clam farmers who have lived and worked on this stretch of the river for as long as anyone can remember.

To an untrained observer, the farm is indistinguishable from any other patch of water. But Amatey knows its precise coordinates, triangulated from trees and other landmarks and marked with a bamboo rod at each corner of the roughly half-acre rectangular plot.

"We know the farms very well," he says. "If you enter someone else's farm, they can even tell from the shore."

Amatey spends most of every day working here about ten feet below the surface, gathering clams into a basket. Wearing eye goggles and a weighted belt, he breathes through a makeshift scuba apparatus that pumps air from a compressor on his canoe.

It's a subsistence living: Amatey estimates that he earns less than $1,000 per year. And in recent years, it's gotten even harder. 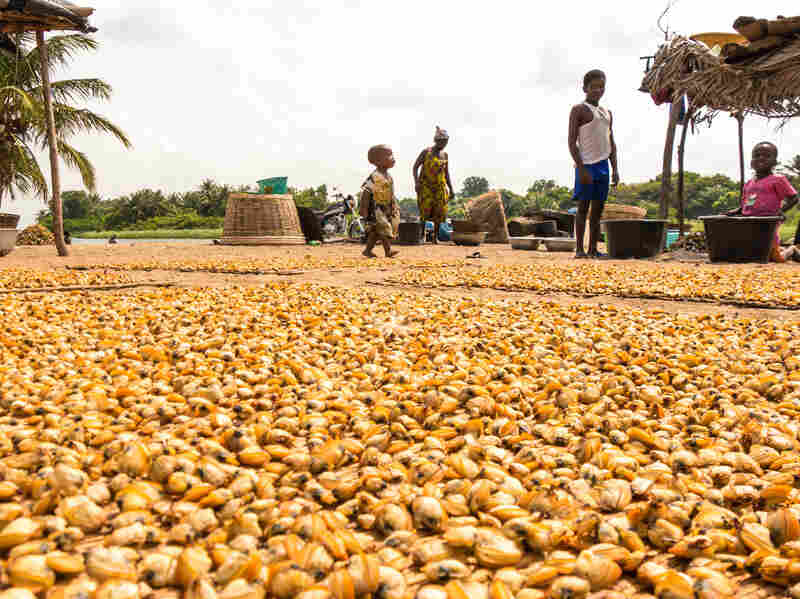 Thousands of clams dry in the sun at a harvesting site in Ghana's Volta River estuary. In recent years, clam fishers have lost access to many sites like this as more land is developed for tourism. Tim McDonnell/for NPR hide caption 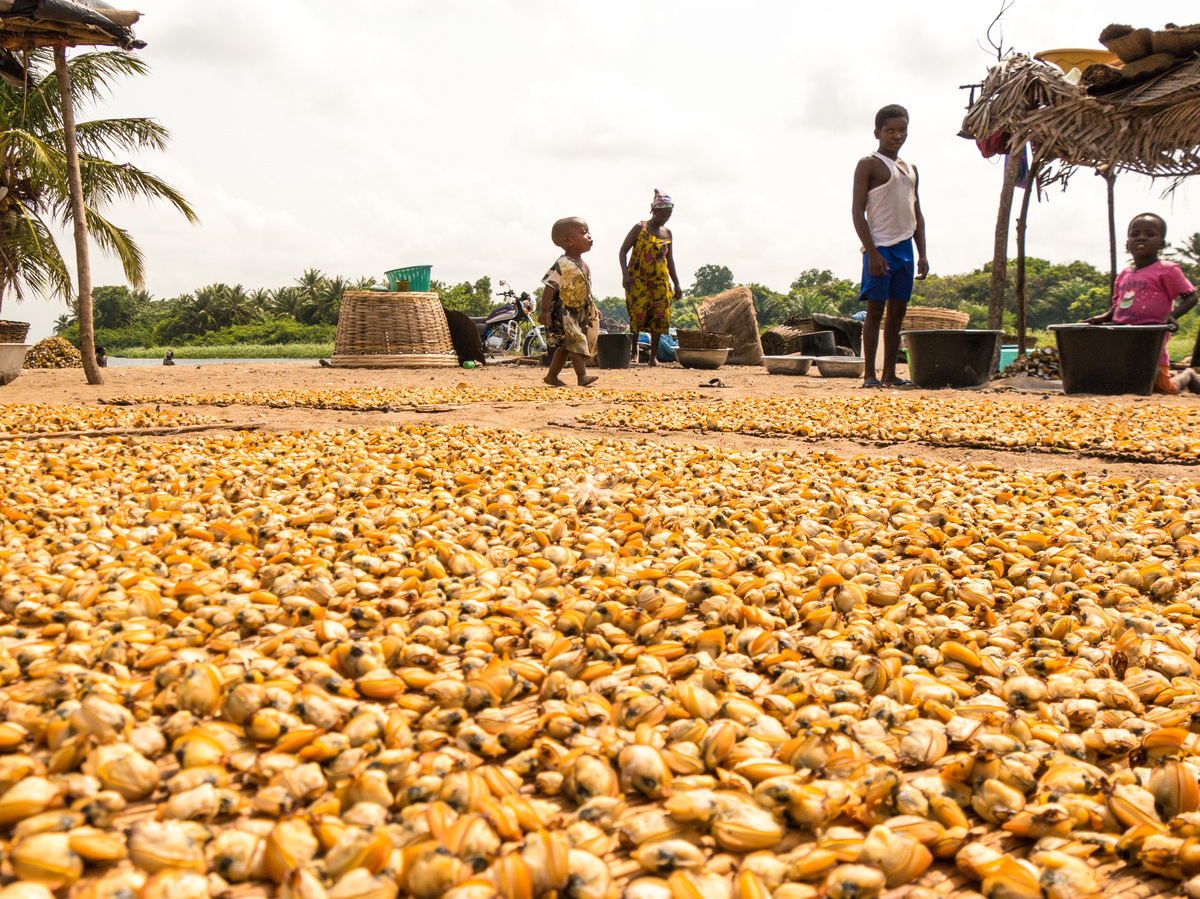 Thousands of clams dry in the sun at a harvesting site in Ghana's Volta River estuary. In recent years, clam fishers have lost access to many sites like this as more land is developed for tourism.

A crop of new luxury resort hotels now crowd the riverbanks, forcing the clam fishers off of land where they used to live, dock canoes and process clams. Tourists' speedboats and jet skis churn the water, threatening to topple the narrow dugout canoes loaded with clams.

The tourists also pose a hazard for the underwater harvesters: In February, one of Amatey's neighbors almost drowned after he was hit on the head by a passing jet ski.

Meanwhile, climate change is applying another kind of pressure. As sea levels in the gulf rise, saltwater — which can be disastrous for the freshwater clams — is creeping farther up the river. As a result, farmers say, disputes over farm boundaries and theft of clams from better-situated farms are on the rise.

But the clam fishers face a fundamental obstacle to securing their livelihoods: "No one has any title to this land," Amatey says, "even though we've been here for generations."

Without a formal, legal claim to the clam farms, Amatey and his neighbors say they have no way to protect themselves from hoteliers and other developers who acquire deeds from the government. They can't get help from the police when thefts occur; without documentation, it is difficult to prove trespassing or demonstrate property rights. Nor can they access government-subsidized fuel and equipment that are available to Ghana's registered fisheries—a $400 million-a-year industry that employs more than 250,000 people.

Indigenous land rights are a major issue across Africa. Nearly 80 percent of land on the continent is community-held, meaning that it's "owned" through a traditional local system that is usually not recognized by the central government. Only one-quarter of that land has any legal protection, according to the World Resources Institute. Which leaves those living on it — including pastoralists in Nigeria, forest-dwellers in Kenya and many other indigenous rural communities — highly vulnerable to land grabs and other abuses.

Development experts say land rights are a critical but often neglected prerequisite for addressing economic development, climate change, food security and gender equity. Without a title, it's hard to get a bank loan. Farmers lack incentive to invest in climate-smart practices if they risk losing the farm at any time. Returning refugees can find their former homes razed. And women can easily lose claim to their land if they divorce or their husband dies.

Many indigenous land rights lack protection because of a scarcity of data, says Mike Graglia, director of New America's Future of Property Rights initiative. In most cases, maps are nonexistent: According to the Cadasta Foundation, a property-rights group, property boundaries on 70 percent of land in developing countries are undocumented.

And experts are in short supply: Ghana has one-fifth the number of professional surveyors per square kilometer as the U.S. "Even if all the surveyors in Africa worked day and night," says Graglia, "you wouldn't be able to map all the informal land in Africa within this millennium."

Tech to the rescue

That's where the GPS tablets come in.

A growing number of research groups and international aid organizations are rolling out software aimed at making it easier for anyone with a tablet or smartphone to accurately map community-held land and record basic information about its proprietors. This data alone doesn't offer any legal protection, but it's an essential starting place.

Over the last few years, GPS mapping software has helped indigenous communities in Uganda, Tanzania, Burkina Faso and other African countries successfully lobby their governments for increased recognition and protection of their land rights. And satellite tracking software is becoming ever more accurate — the latest technology can pinpoint your location within one foot, whereas older devices can be off by more than a dozen feet. So it makes an even more powerful tool.

"This technology enables people to credibly say, 'This is mine'," Graglia says. "Then you can have a much more involved conversation" about legal rights.

Amatey is more direct: "Having a map can stop people from stealing our land."

The software Hen Mpoano is using, called Open Tenure, was first produced in 2016 by the UN Food and Agriculture Organization. It allows users to drop a GPS pin at each corner of a plot of land, then automatically generates a map.

The organization has mapped about 50 clam plots in the Volta River so far,but there are hundreds more to go before the whole estuary will be charted. Hen Mpoano plans to eventually leave a tablet with the clammers and let them do the mapping themselves.

Justice Inkoom, another Hen Mpoano researcher, says the Volta project is an opportunity to fine-tune how GPS mapping can be used to support small-scale fishers across West Africa, who frequently have to compete for space with industrial trawlers and foreign fishing fleets.

"The map is the first step to management and security," he says. "After it develops into law, then if anything should happen, the law can take its course."