Accessibility links
Men In Rwanda Teach Other Men To Be Better Husbands And Fathers : Goats and Soda An experimental program in Rwanda tried to teach men to do more chores, listen to their wife instead of bossing her around and get involved in raising the kids. Did it work?

Men Teaching Men To Be Better Husbands And Dads

Men Teaching Men To Be Better Husbands And Dads 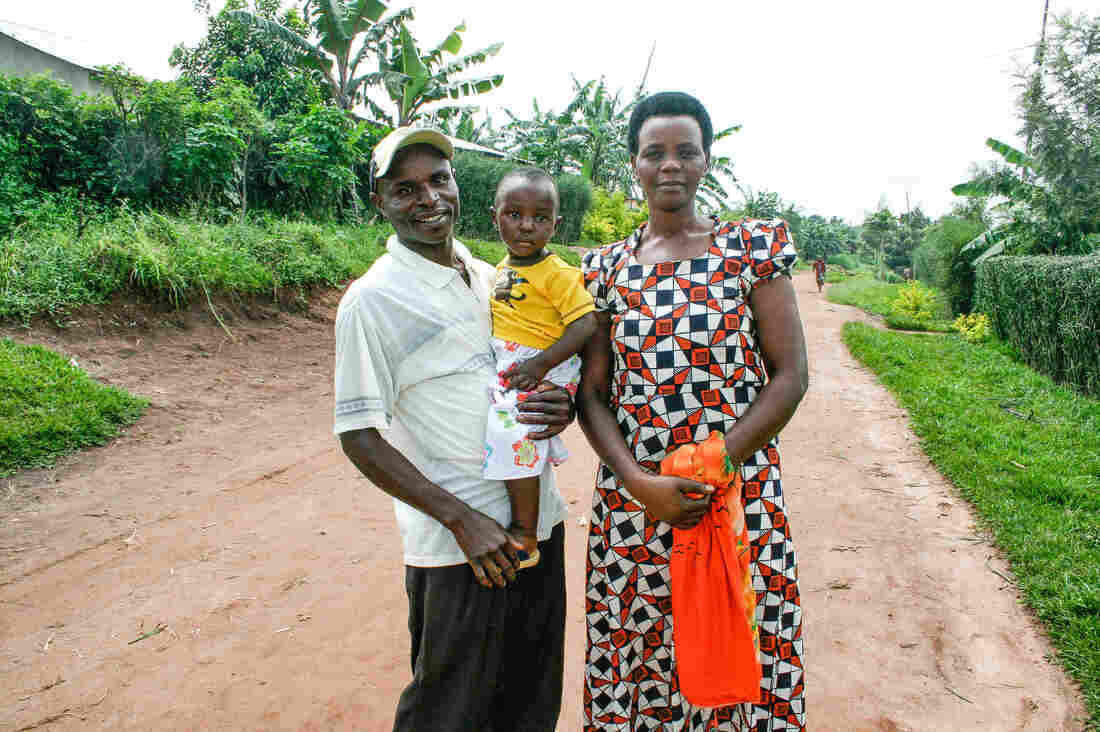 Jean Marie Rukundo and his wife, Theodosie Uwambajimana, with their 2-year-old daughter. They've nicknamed her "Rwamrec," the acronym for a resource center in Rwanda that taught Rukundo how to step up his game as a spouse and father. When he came with his wife to the delivery room for the child, she says that "touched my heart." Amy Yee for NPR hide caption 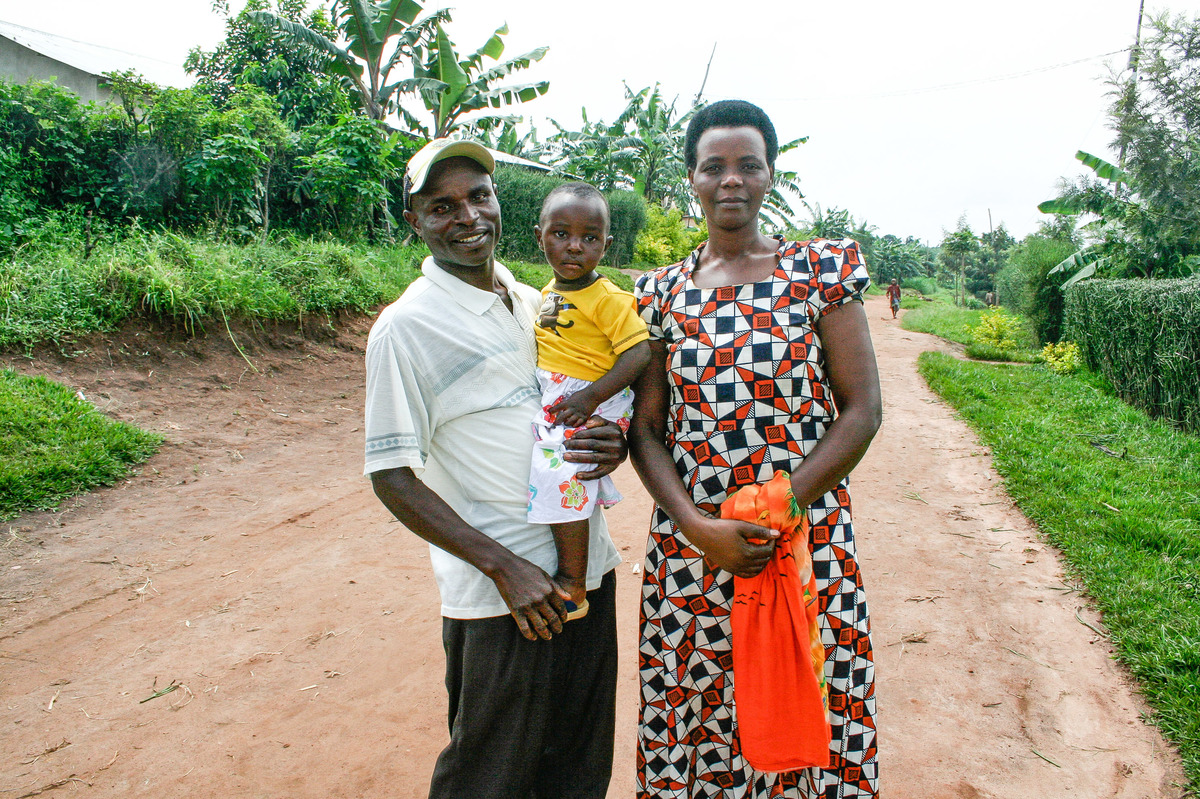 Jean Marie Rukundo and his wife, Theodosie Uwambajimana, with their 2-year-old daughter. They've nicknamed her "Rwamrec," the acronym for a resource center in Rwanda that taught Rukundo how to step up his game as a spouse and father. When he came with his wife to the delivery room for the child, she says that "touched my heart."

Jean Marie Rukundo did not accompany his wife to the clinic the first two times she gave birth. Here in rural Rwanda, that was considered the duty of another woman, like her sister. His main job was farming — though his wife farmed too. After work, Rukundo used to leave his hoe with her and then go play cards with men in the village. Meanwhile, his wife went home from the fields, gathered firewood and water, prepared dinner, cleaned dishes and cared for their children.

But these days Rukundo helps his wife. He cooks, washes clothes and dishes and looks after their toddler. He considers her opinions on financial decisions like selling a goat; he never consulted her before. Rukundo declares that he has no time for playing cards now. "I'm not missing it because there is development at home," he says. And for the birth of their third child, Rukundo escorted his wife to the clinic. That "touched my heart," says his wife, Theodosie Uwambajimana.

All this husbandly helpfulness was a dramatic challenge to Rwanda's traditional patriarchy – and not initially accepted by Rukundo's relatives and neighbors. They criticized his behavior, which struck them as odd. They asked him, "'Are you bewitched?'" It was a serious question in Gisanza, a village in eastern Rwanda where superstitions persist.

The change was sparked by a program called MenCare that taught 575 expectant and young fathers in rural Rwanda about parenting, reproductive and maternal health, couple communication and more from 2013 to 2015.

For over five months, trained local facilitators led groups of a dozen men ages 21 to 35 in weekly sessions. More than 60 percent of the participants had primary school education or less, and fewer than a third said they could always afford to buy basic items. Rukundo, 37, who participated, attended school through third grade, while Uwambajimana, 32, finished sixth grade.

For the first time, these men openly discussed issues such as pregnancy, birth control and violence. They also worked on strategies to solve conflicts with their spouses. Wives joined for about half the sessions.

"Usually when you talk about the gender issue, people consider it's a women's issue. But you can't achieve gender equality if men aren't on board," observes Fidèle Rutayisire, chairman of Rwanda Men's Resource Center (RWAMREC), a nonprofit in Kigali that ran the MenCare program based on an approach developed by the nonprofit Promundo in Latin America. "It's easier for men to be changed by peers rather than by women."

That's backed up by the findings of a randomized control trial comparing people in the program to people who did not participate, conducted nearly two years after its conclusion. The 575 couples in MenCare were surveyed, along with 624 couples who were not in the program. The results were published this April in the journal PLOS One.

Which Countries Guarantee That New Dads Get Paid Paternity Leave?

In MenCare couples, husbands spent 2 hours and 15 minutes on household chores per day – nearly an hour more than those in the comparison group. Wives were more likely to use contraceptives, and there was more equality in making financial decisions, according to the study by Promundo, Rwanda Biomedical Center and Rwanda Men's Resource Center.

When asked if domestic violence is common in her community, Uwambajimana nods and emphatically replies, "cyane," meaning "much" in Kinyarwanda, the language of Rwanda. As she talks about how much happier life is now, Uwambajimana cradles her sleeping 2-year-old daughter, whom the family has nicknamed "Rwamrec," the acronym for Rwanda Men's Resource Center.

"The study shows how it can be possible to have a tangible reduction in the use of violence," said Wessel van den Berg, of Sonke Gender Justice, a nonprofit in South Africa that is not connected with Rwanda's MenCare program or the study in PLOS One.

There are few scientific studies showing evidence of reducing gender-based violence; qualitative evaluations about sensitive issues are time-consuming and complex.

Now based on the findings of the study, Rwanda's government will be working with men in its gender and health policies.

In general in Rwanda, it's "men who decide everything. Man is king in his family," says Shamsi Kazimbaya, a Promundo program officer based in Rwanda. That's why there were even some women who were resistant to the MenCare program.

"So many programs are about empowering women. But without involving men, they don't last long," adds Kazimbaya.

A separate 2013 program run by RWAMREC in collaboration with the Rwandan government helped women earn money through gardening and other work. The result? An unexpected spike in domestic violence because the women's new income created tension with their husbands.

The lesson RWAMREC learned is that women's empowerment programs must involve men.

Theoneste Nibatuze, another MenCare participant, now recognizes how he caused misery for his wife, Rachel Nyiramutima. Before, "there was no happiness in the family. There was too much work," she recalls.

He admits, "I was very bad in society. At home I behaved rudely."

Nyiramutima's eyes well up with tears as she recalls the tension. If her husband came home and dinner wasn't ready, he scolded her and told her, "'You don't know how to be married.'"

After her husband started MenCare, he began helping with housework, much to her bemusement. Nibatuze washed dishes and socks that he previously left in the basin for her to clean. He even pounded and cooked cassava and added vegetables and peanuts to meals to add nutrients for his pregnant wife.

At first, Nyiramutima was uncomfortable with this change. When her mother-in-law came to the house, Nyiramutima would usher her husband out of the kitchen. Her sister-in-law exclaimed, "Eh! Why are you doing these things?" But eventually, the family got used to his new habits.

After his wife gave birth, Nibatuze has continued to cook, gather firewood, wash dishes and clothes and graze livestock. He used to control their finances so tightly that his wife had to secretly sell a "few bananas" to get money to buy Vaseline, she remembers.

Today, she has a say in their finances and more money is spent on house improvements.

Nibatuze accompanies his wife for health check-ups and vaccinations and has bonded more with the family. If he is away, his son asks for him. "Now he is enjoying the care of both parents," says Nibatuze.

For him, learning about family planning was one of the most eye-opening parts of MenCare.

It was a new concept for Nibatuze, whose father had 24 children with several wives. "We didn't get education. I don't want my child to experience that," Nibatuze explains.

Now he and his wife are talking about the right time to have a second child.