Accessibility links
Will Cease-Fire Help End 'Unimaginable' Suffering In South Sudan? : Goats and Soda That's how the U.N. aid chief characterizes the situation. A cease-fire that could bring improvements was signed last week — and violated within hours. 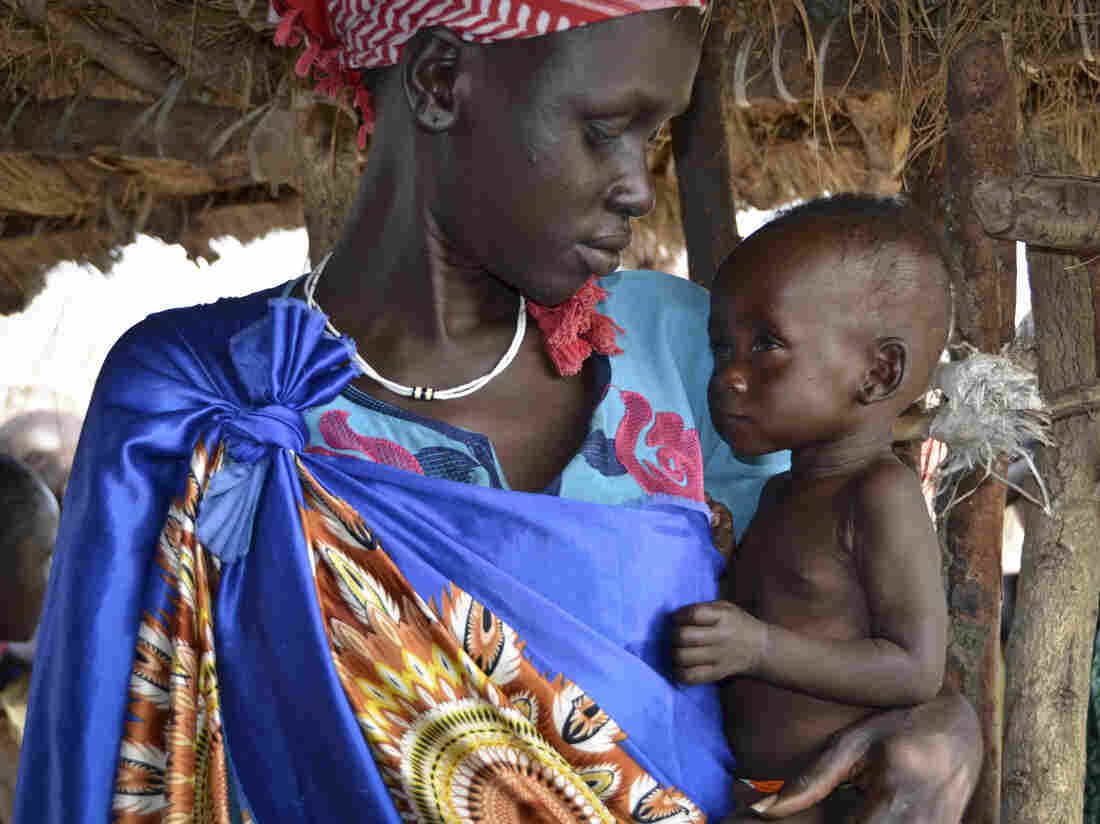 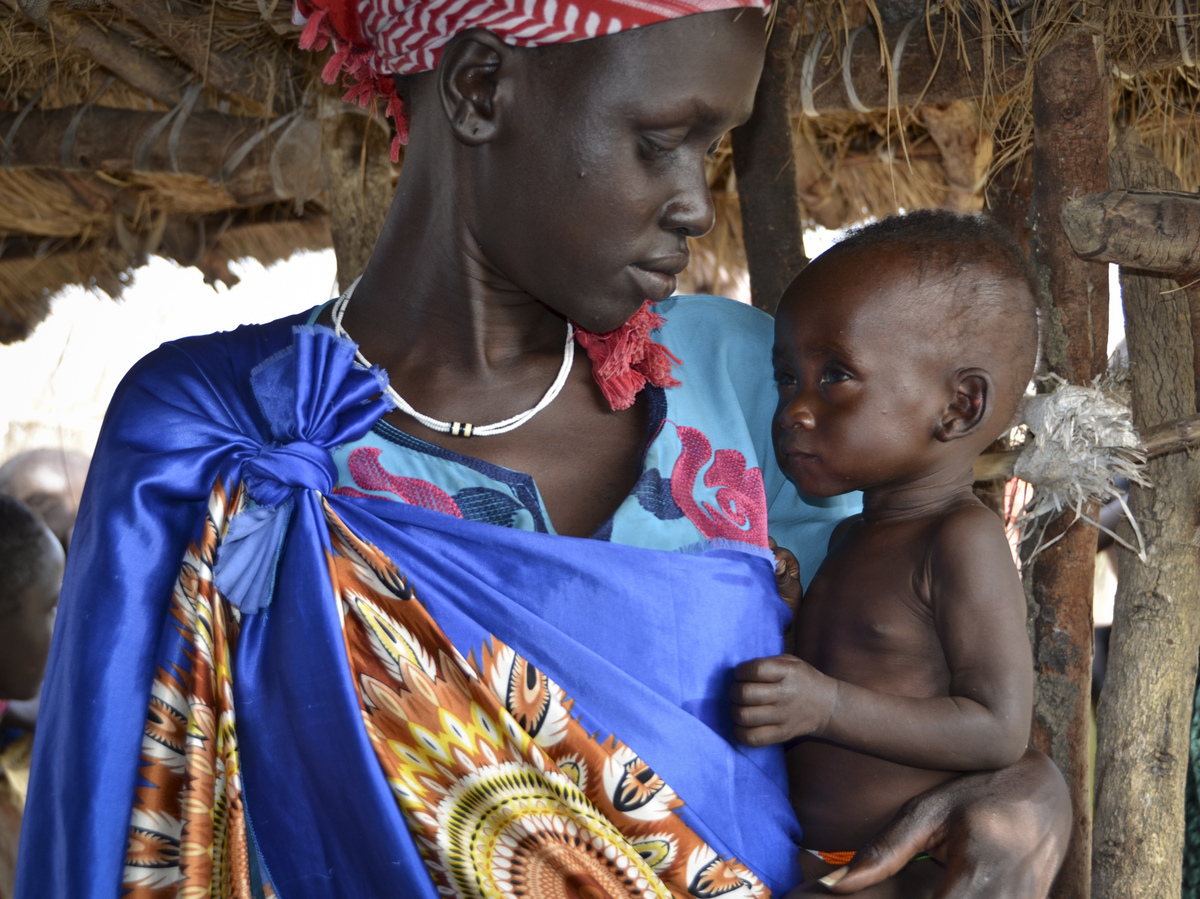 Elizabeth Nyakoda holds her 10-month-old daughter at a feeding center for children in South Sudan.

U.N. aid chief Mark Lowcock told reporters in Geneva last month that the level of suffering in South Sudan is "on an unimaginable scale" and getting worse.

And U.S. Ambassador to the United Nations Nikki Haley wrote in an op-ed for The Washington Post that the country's leaders have "failed" the children of South Sudan.

Last week, there were signs of hope for a better future in the world's newest nation. The president of South Sudan and his former vice president signed a cease-fire in the civil war that has ravaged the country for nearly five years.

The cease-fire went into effect last Saturday. Within hours, it had already been violated.

But aid organizations are hoping that one part of the cease-fire will remain intact: providing humanitarian access to the suffering people of South Sudan.

Near-famine levels of hunger have already swept across large portions of the country and, with the onset of the rainy season, life-saving aid is becoming extremely costly to deliver.

Health workers are also bracing for an uptick in water-related illnesses, like cholera, malaria and diarrhea, which can be especially deadly when people are malnourished.

About 63 percent of the population (more than 7 million people) is "severely hungry," according to the World Food Program (WFP). Just under 2 million people have been forced to flee their homes and are internally displaced within the country, while another 2.5 million have fled to neighboring countries as refugees.

South Sudan is now the largest producer of refugees on the continent and the third largest in the world, after Syria and Afghanistan, according to the UN refugee agency. About 65 percent of the refugees are under the age of 18. 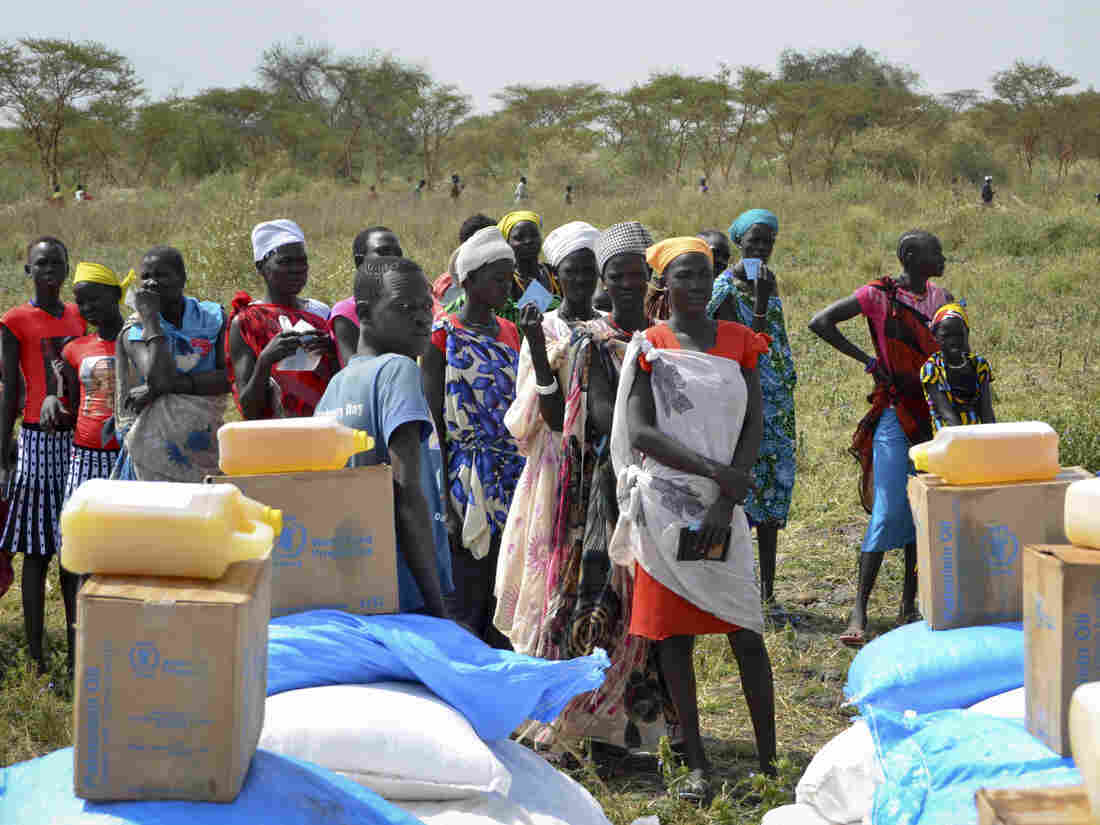 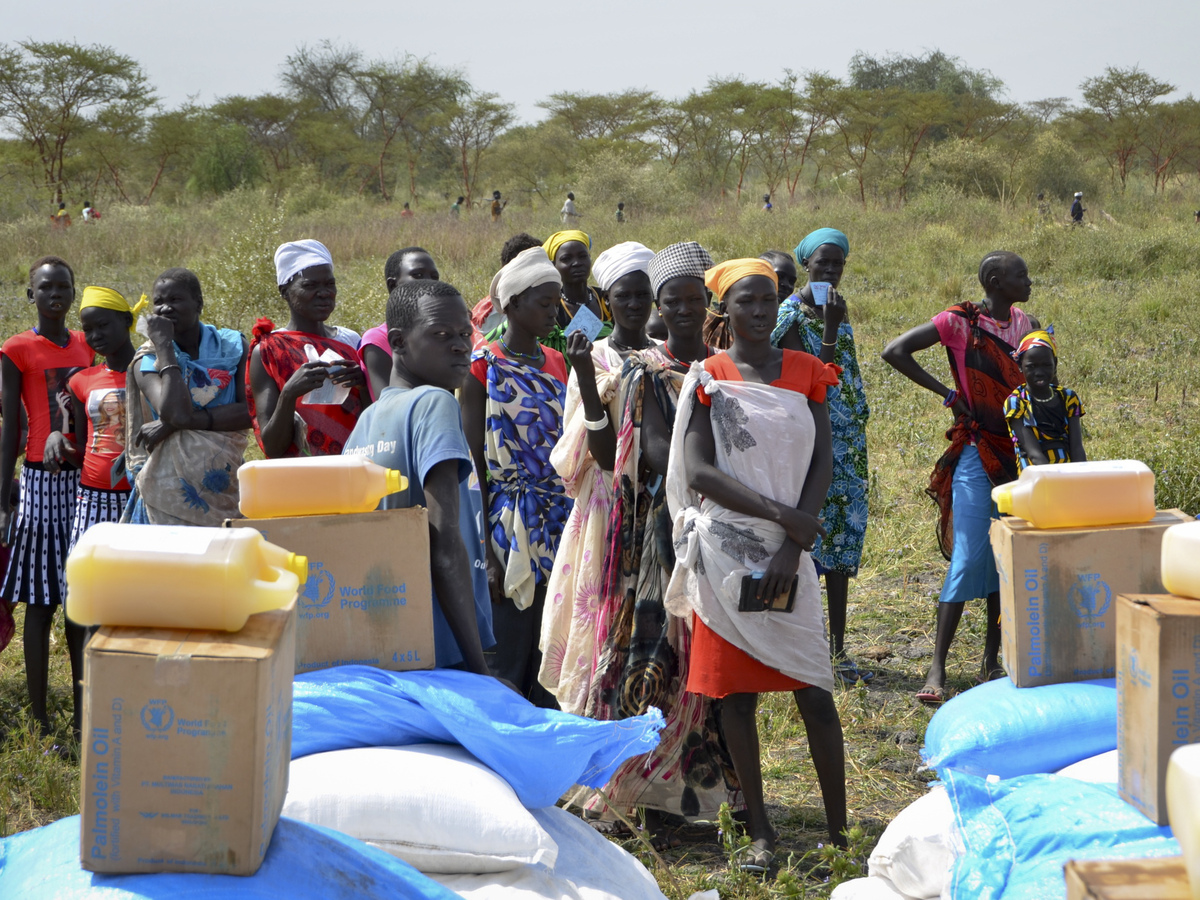 Waiting in line for rations at a World Food Program distribution in South Sudan.

In addition, aid workers are being abducted and killed, while 19,000 children are estimated to serve in armed forces and groups in a conflict that began when President Salva Kiir Mayardit accused his then-deputy Riek Machar of plotting a coup in December 2013. What began as a political dispute quickly took on ethnic undertones between Kiir's Dinka — the country's ethnic majority — and Machar's Nuer, the second-largest ethnic group.

Even before gaining independence in 2011, the people of South Sudan had suffered through decades of another devastating civil war.

"I think it's worth noting that Oxfam's worked in [the area that is now] South Sudan for more than three decades," said Noah Gottschalk, Oxfam's humanitarian policy lead in D.C. "No one's ever seen it as bad as it is now. And I think that's saying an enormous amount. People who've lived through war and displacement and the deaths of close relatives are now finding themselves in an even worse situation than in the past."

In Pibor, for example — a county in the eastern part of the country — the Famine Early Warning Network (FEWSNET) reported in April that even though the official hunger level is "emergency," more than 20 percent of households could be classed as hitting famine levels. The situation in Pibor is so dire that, according to the the U.K.-based Oxfam, some people are eating grasses and weeds out of desperation, although they are not safe for consumption and are making them sick.

Even in other areas that are facing less severe levels of hunger, people are beginning to exhaust their usual coping mechanisms. They're having to sell household assets, like cattle and goats, according to Oxfam, while children roam the streets in search of food, Reuters has reported.

"People in South Sudan are incredibly resilient and incredibly strong," Gottschalk told NPR. "But they're being stretched further than ever before."

According to Gottschalk, the current crisis is the culmination of many negative trends.

"It's quite a complicated situation," said Chris McElhinney, the country director in South Sudan for Irish charity GOAL Global. "What we're seeing is a continued deterioration of the humanitarian requirements in the country and the needs that people face."

As is often the case, crises beget crises — and in South Sudan, the civil war catalyzed an economic collapse. By 2017, oil production — which makes up more than 99 percent of the country's export revenue and about 60 percent of its gross domestic product (GDP) — had dropped to half its pre-war levels. According to the World Bank, GDP per capita fell from $1,111 in 2014 to less than $200 last year. In response to the fiscal deficit, the government printed more banknotes and, unsurprisingly, inflation soared.

At its highest, in September 2016, year-on-year inflation was 550 percent, according to the National Bureau of Statistics. By September 2017, it had lowered to 102 percent. But inflation continues to perpetuate the hunger crisis, as prices rise and the value of the South Sudanese pound drops. Last year, the WFP estimated that a bowl of bean stew that costs a New Yorker $1, would cost a South Sudanese $321.

To fight the hyperinflation, the government last year decided to increase work permit fees for aid workers from $100 to $10,000.

On top of that, South Sudan is one of the most dangerous places in the world to be an aid worker. More than 100 aid workers, mostly South Sudanese, have been killed since the war began.

According to the FEWSNET report, the only thing keeping some areas of the country from hitting a more severe hunger level is humanitarian assistance. But now that the rainy season has begun, not only are people running out of their harvested reserves, but roads to more than half the country, the lifeline for aid, could become inaccessible. This means that air drops are often the only means of delivery. It's a solution, but an expensive one.

In order to prevent South Sudan in 2018 from being worse than 2017 — when famine was officially declared in two Counties — the U.N.'s humanitarian response plan is calling for $1.72 billion.

"It's a staggering amount of money," McElhinney said.

Last year's humanitarian response plan raised $1.17 billion of the $1.6 billion it asked for. So far for 2018, donor countries, organizations and individuals — including the U.S., U.N. agencies and the World Bank — have contributed $706 million (just over 40 percent of what's needed). Objectively, that is a lot of money — just not nearly enough for the immense needs in South Sudan.

Especially for South Sudan's children, whose health, development and safety are being impacted the most, education is critical. A UNICEF report in December estimated that three out of four children are not in schools.

"Often we think about food, water, shelter as the things that people need to survive," Gottschalk said. "But for a country to survive, education is needed as well."