Accessibility links
Some Bacteria Are Becoming 'More Tolerant' Of Hand Sanitizers, Study Finds : Goats and Soda Researchers wanted to know why certain infections were increasing in hospitals. They were surprised by what they found. 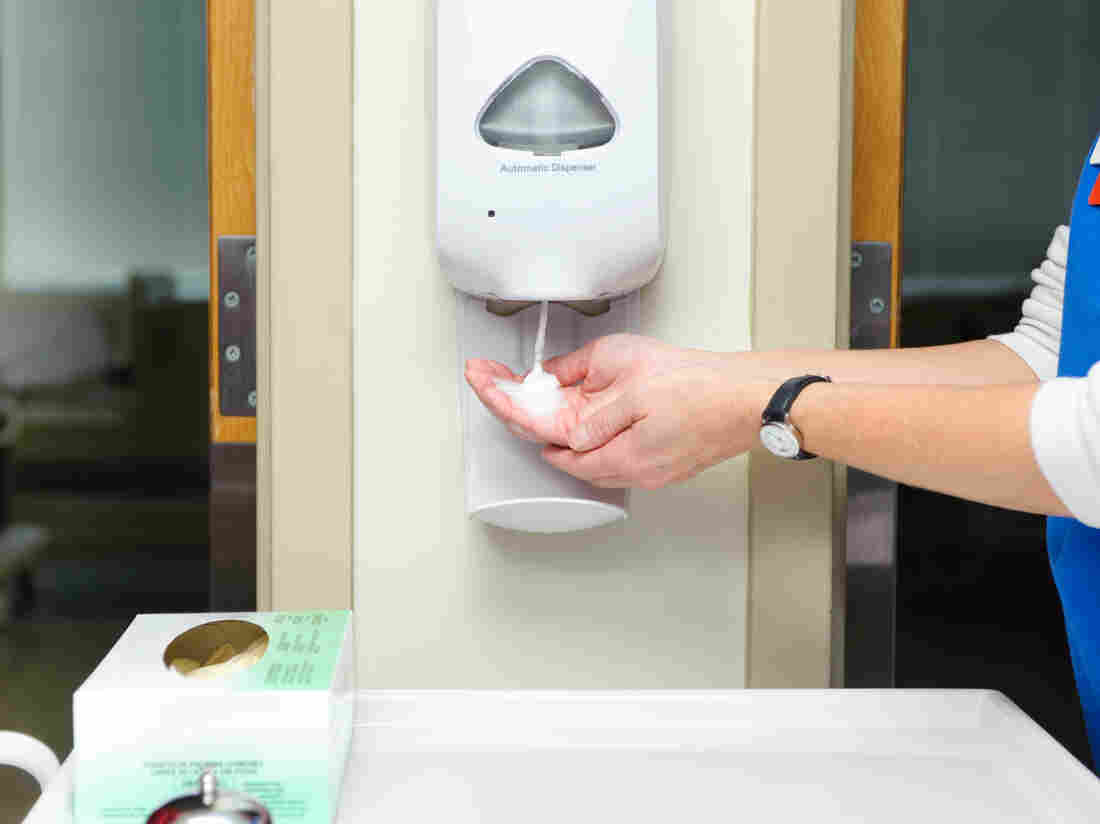 A study has found that some bacteria are becoming "more tolerant" of the alcohol-based hand sanitizers used in hospitals. nano/Getty Images hide caption 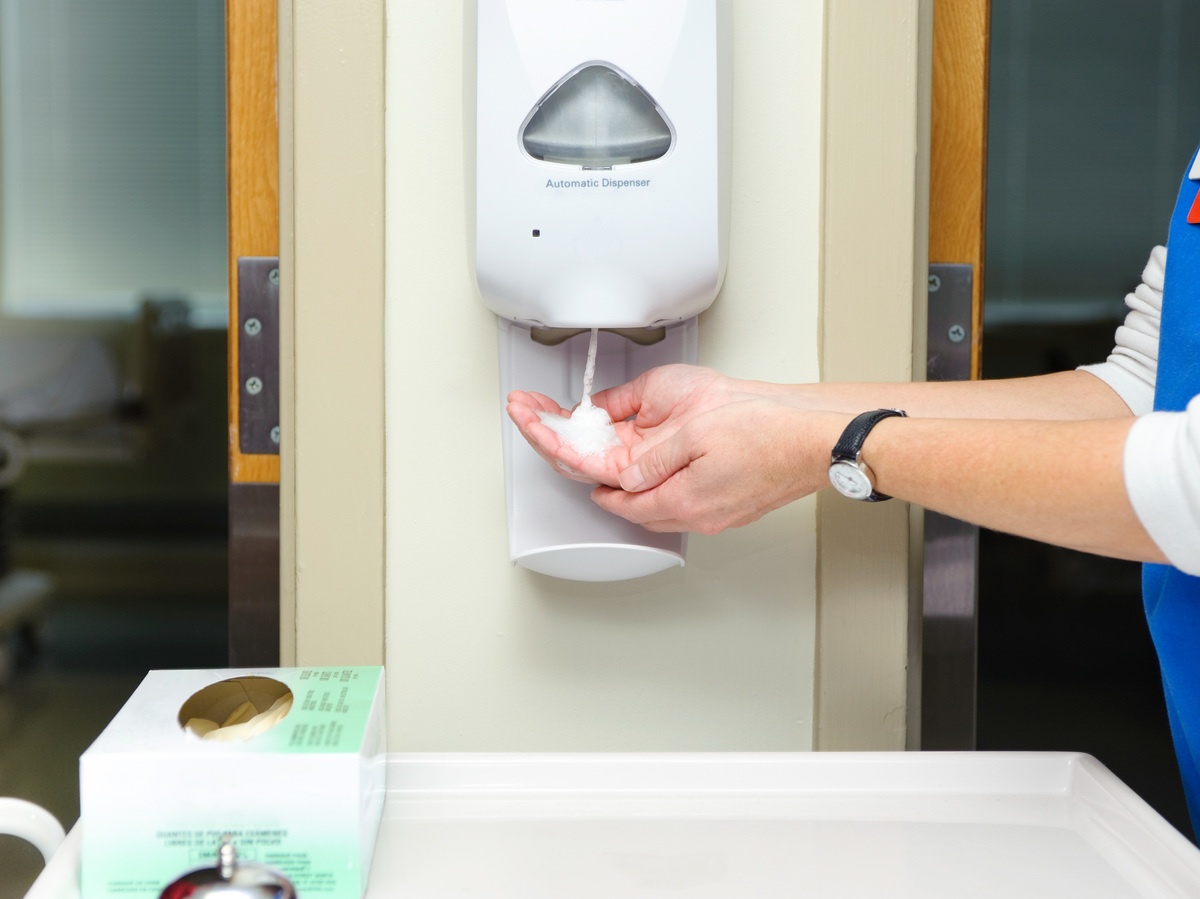 A study has found that some bacteria are becoming "more tolerant" of the alcohol-based hand sanitizers used in hospitals.

In the early 2000s, hospitals across Australia began installing more hand-sanitizer dispensers in their rooms and hallways for staff, visitors and patients to use. Research showed these alcohol-based disinfectants helped battle staph infections in patients and certain kinds of drug-resistant bacteria. And rates of these infections went down.

But other infections didn't drop when people started using the sanitizer stations. In fact, certain infections went up.

In particular, enterococcal infections — caused by bacteria that affect the digestive tract, bladder, heart and other parts of the body — started increasing.

This wasn't only happening in Australia. Countries around the world saw rises in this type of infection even as hand sanitizer became more popular. Globally, enterococci make up ten percent of bacterial infections acquired in the hospital. In North America and Europe, they are a leading cause of sepsis, a deadly blood infection.

Now, researchers say, they may have found the cause. Blame it on the alcohol.

New research published by Science Translational Medicine on Wednesday shows that several strains of these bacteria have begun adjusting to alcohol-based hand sanitizers. They're not resistant to the alcohol — at least, not yet — but they're becoming "more tolerant" of it, the authors write. That means the bacteria were able to survive for longer periods of time after being doused with alcohol.

The researchers used different strengths of alcohol concentrations to combat the bacteria, starting with 23 percent. Eventually, at a 70-percent alcohol mixture, the bacteria were conquered. Typically, hand sanitizers are 60 percent alcohol.

To make matters worse, many of these alcohol-tolerant bacteria are resistant to multiple drugs as well. Half of the strains the researchers studied cannot be treated with vancomycin, a last-line antibiotic. That means the bacteria are spreading more easily within hospitals, and there aren't many options for treatment.

VIDEO: Are We Headed Toward A Post-Antibiotic World?

The researchers were surprised by their findings.

"To our knowledge this was the first time anyone had shown hospital bacteria becoming tolerant to alcohols," says Timothy Stinear, a coauthor of the study and a researcher at the University of Melbourne's Doherty Institute for Infection and Immunity.

First the researchers compared 139 types of bacteria, looking at the same strains over a 19-year stretch — from 1997 to 2015. As time passed, the bacteria evolved to tolerate alcohol better. To be exact, bacteria collected after 2009 were 10 times more tolerant than pre-2004 bacteria — which corresponds to the national push to use more hand sanitizers.

But bacteria don't always operate in your body the way they do in a lab. It's risky to test these drug-resistant bacteria on people, so researchers turned to tests on mice — a common way to model how humans might also react. The results were the same — the guts of mice quickly showed signs of alcohol-tolerant bacteria, even when their cages were cleaned with an alcohol solution.

Health-care institutions trying to control the spread of these infections will need to "adhere rigorously to hand-hygiene protocols," Stinear says — and probably institute additional measures to stop the spread, such as increased hand-washing with soap after coming into contact with the bacteria.

Lance Price, a professor at the George Washington University's Milken Institute School of Public Health and the founding director of GW's Antibiotic Resistance Action Center, was also surprised by the findings.

"I always thought of alcohol as being like a sledgehammer," says Price, who was not affiliated with the study. "But clearly, these are innovative organisms. And evolution happens pretty fast when you're dealing with populations that can double every 30 minutes and travel in packs of billions."

The particular type of bacteria, enterococci, is most often found in hospitals. But this research has implications for any bacteria that may begin tolerating alcohol. For instance, organisms like C. diff, another rapidly rising infection that is difficult to treat, have hard shells that make it difficult for alcohol to kill them; the best way to get rid of them is to wash them down the drain.

"If you're washing your hands less because that alcohol-based hand sanitizer makes you feel confident that your hands are clean," Price says, "all of a sudden you can become a vehicle for alcohol-resistant organisms."

The research is still clear that alcohol-based hand sanitizers are more effective at battling some bacteria, like those causing staph infections. However, this study indicates that other bacteria are best cleaned off with simple soap and water.

What You Might Not Realize About The Benefits Of Hand-Washing

"It's the physical action of lifting and moving them off your skin, and letting them run down the drain," Price says.

"We have to be careful about this new trend towards heavy reliance on alcohol-based hand sanitizers," Price continues. "Soap and water should be our number-one protection" — both in hospitals and for personal use.

The next question, Price says, is whether the bacteria will continue to evolve and tolerate higher and higher doses of alcohol — or even stop responding entirely.

"Is it possible for these organisms to develop complete resistance to alcohol?" he asks.