Accessibility links
Global Health Innovators Master The Art Of The Pitch At DevelopmentXChange : Goats and Soda Projects helping to improve medical care for moms and babies in poor countries want to scale up. But first they need to master the art of the pitch. Bryn Sobott of the FREO2 Foundation presents his group's solution to pneumonia treatment — an oxygen delivery machine that can operate using the energy generated by running water — at a pitch competition organized by Saving Lives At Birth: A Grand Challenge for Development in Washington, D.C. Pearl Mak/NPR hide caption 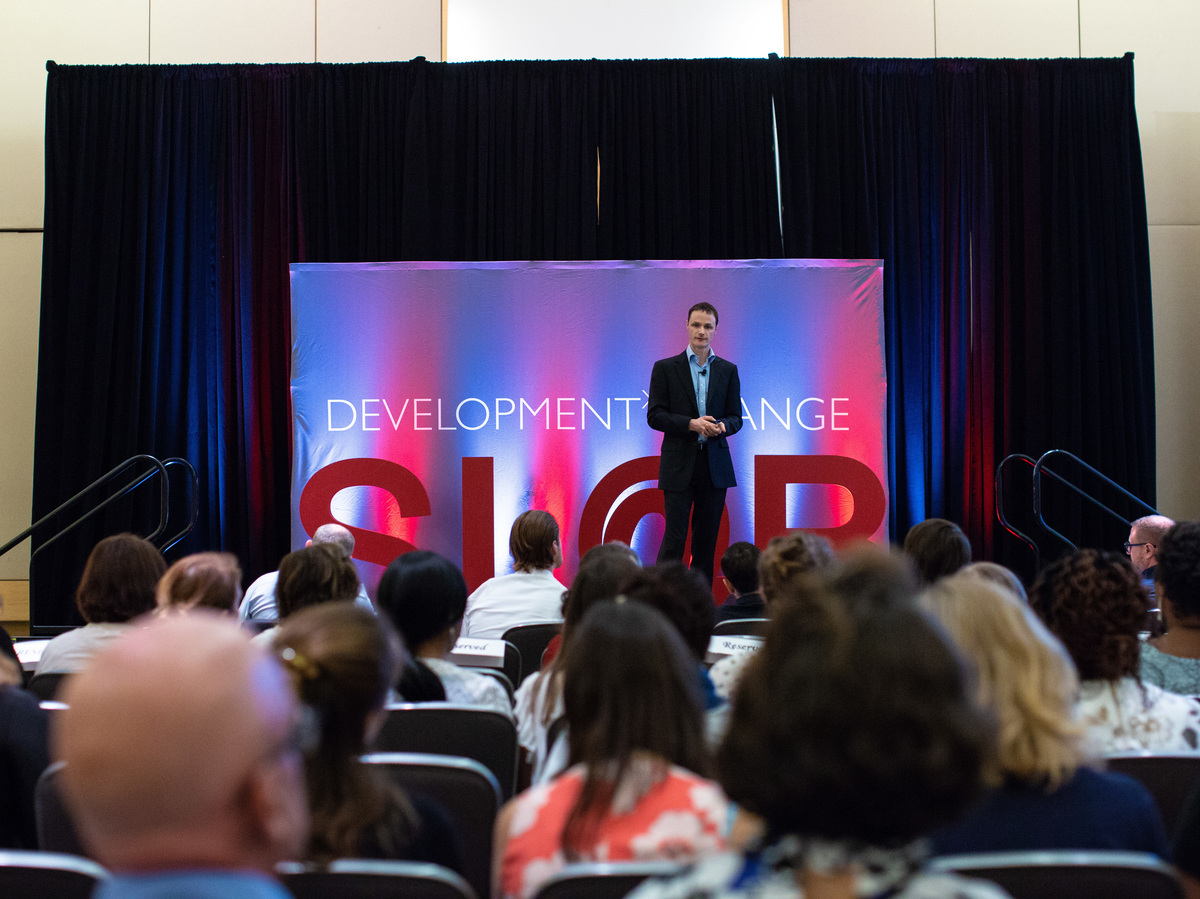 Bryn Sobott of the FREO2 Foundation presents his group's solution to pneumonia treatment — an oxygen delivery machine that can operate using the energy generated by running water — at a pitch competition organized by Saving Lives At Birth: A Grand Challenge for Development in Washington, D.C.

What would happen if global health innovators appeared on "Shark Tank," the reality TV show that judges business concepts from straightforward to zany?

It'd probably look a bit like the pitch competition the late July DevelopmentXChange conference in Washington, D.C. The event was organized by Saving Lives At Birth: A Grand Challenge For Development, a program that gives out grants to projects helping to improve medical care for moms and babies in low-income settings. It's funded by groups like the Bill and Melinda Gates Foundation and the U.S. and U.K. government. (Note: As readers of Goats and Soda may know, the Gates Foundation is also a funder of this blog and of NPR.)

The ten participants showcased a variety of innovations, each in different stages of development: medical devices that can work without electricity, new ways to administer medications and high-tech strategies to give women timely medical advice. All have previously received anywhere from $250,000 to $2 million from the program.

Now, Saving Lives At Birth wants to help their grantees kick it up a notch.

Cue the pitch session. If these global health projects want to scale up, they need to know how to communicate their vision, grab investors' interest and attract more funds, says Sofia Stafford, a program assistant at USAID, one of the partners of Saving Lives At Birth.

Each competitor was paired with business consultants who helped them tighten their speeches and create spiffy PowerPoints.

Many of the innovators, who come from nonprofit groups or the academic world, had to start from scratch on their presentations, says Rachele Haber-Thomson, one of the coaches. They knew how to apply for funding through grants — but didn't have experience pitching to investors, who expect concise explanations and savvy business plans, she says. So she encouraged the innovators to develop "a hook" when explaining their projects and "think about what would you tell someone at a cocktail party."

The competitors had seven minutes to lay out the problem they're addressing, describe their solution and get into the nitty-gritty of how they'd make it work. Then a panel of judges — including experts in reproductive health, technology and strategic communications — peppered them with seven minutes of questions. The judges scored the whole shebang based on several factors, including target market, competition and revenue model.

The winner would get either a sponsored trip to another Saving Lives at Birth event in Berlin this October or free consulting services from a communications firm. But there's no cash handed out — although there could be financial benefits from the 7-minute pitch. The audience included people who might be interested in ponying up cash: representatives from investment firms, tech companies, nonprofits and the pharmaceutical industry.

First up on the stage was an Australian physicist named Bryn Sobott, who immediately got the room's attention by showing a short video of a coughing baby. Pneumonia is the leading infectious disease killer of kids worldwide, with nearly 1 million deaths a year of children under age 5. He told the audience that a key to treatment is something widely available: oxygen.

The problem is that there isn't always electricity around to deliver that oxygen in the developing world, which is why the FREO2 Foundation has created — and is currently testing in Uganda — an oxygen concentrator that can operate just on energy harnessed from running water.

Who could compete with that? Try the next pitch presenter, Edward Bitarakwate. He opened with this line: "Imagine a world where children are born without the risk of HIV." The pediatrician is the Uganda country director for the Elizabeth Glaser Pediatric AIDS Foundation, and he presented its plan to make sure that every HIV-positive mother delivering a baby at home has a Pratt Pouch, a squeeze packet containing just the right amount of anti-AIDS drugs to help prevent transmission of the virus to the newborn. Design of the pouches is complete and a facility to make them is about to be certified, he said, so the next step is making them available nationally.

Inspired ideas kept on coming, often with a gee-whiz tech angle. Ibrahim Modehas of the University of Michigan introduced the room to SubQ Assist, a device that makes it possible for virtually anyone to insert a long-acting contraceptive device under the skin of a woman's arm. It could dramatically increase the number of women around the world with access to birth control, he said.

Chelsea Schiller, from the global health nonprofit PATH, laid out the case for the SafiStation chlorine generator. It allows hospitals to produce their own disinfectant on site. Mix salt and water, pour it in the device, press a button and voila.

In the end, the judges picked Gradian Health Systems as the winner. The group is best known for its universal anesthesia machine that continues to work even in the event of a power outage. But this pitch focused more on Gradian's plans to create a network of mobile training centers to teach skills to health workers that can boost the quality of medical care in places where doctors are scarce.

The idea is to help health providers get the practice they need to treat patients by using mannequins. For example, one mock operating scenario might center around someone who's been injured in a car accident and must have a tube inserted in his or her larynx. Then, the lights go off. "You have to figure out what you have to do," said Adam Lewis, Gradian's communications and marketing manager, in his presentation.

Gradian was named the winner for its pitch. "It doesn't matter how sexy it [an innovation] is if you don't look at the unsexy sides of it," says Lewis.

But for Lewis, the real takeaway was just the chance to put together a polished presentation. It forced Gradian to examine its work and practice communicating that message to others, he says. Before, when a potential funder asked what Gradian needed, it was a scramble.

"Now, we have an approach [when talking to investors]," he says. "It's going to change the course of our business."