Accessibility links
India Aims For The World's Biggest Health Care Overhaul : Goats and Soda Posh private hospitals give world-class care — and serve lattes. At government facilities, cancer patients sleep on the sidewalk. But the prime minister has a plan to help the poor. 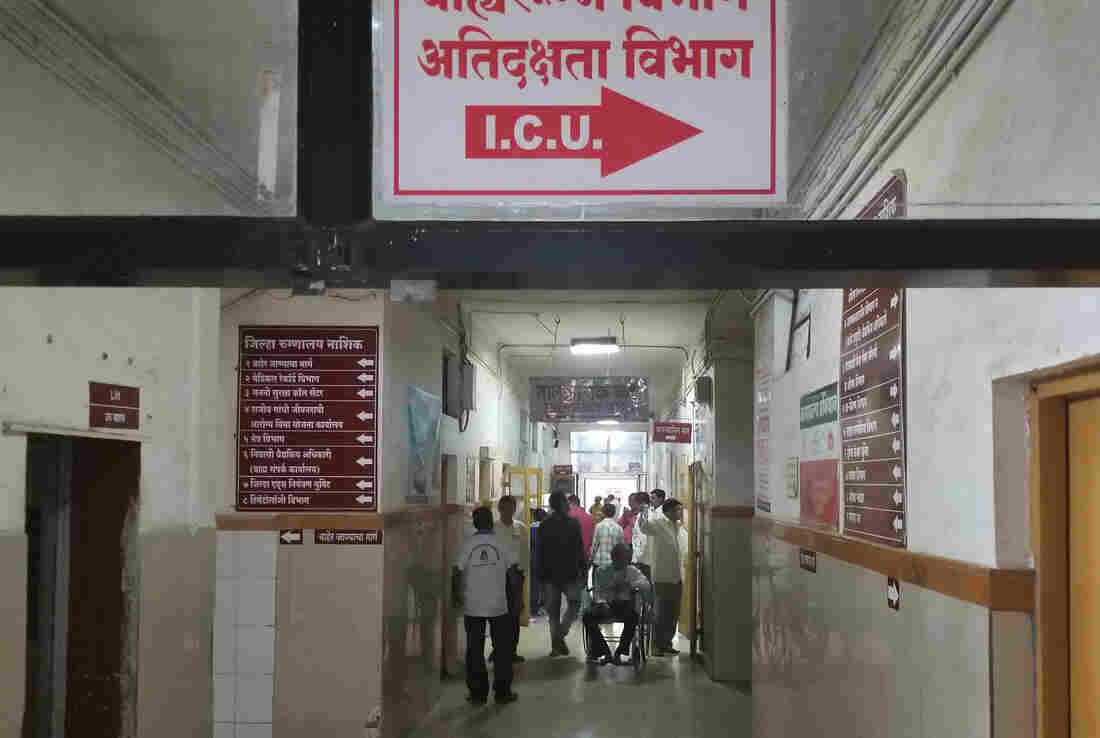 The Nashik Civil District Hospital is a government facility about 100 miles outside Mumbai. The director, Dr. Suresh Jagdale, acknowledges that the mortality rate is higher than that of private hospitals, but he says he's proud to offer free health treatment to India's poor. Lauren Frayer/NPR hide caption 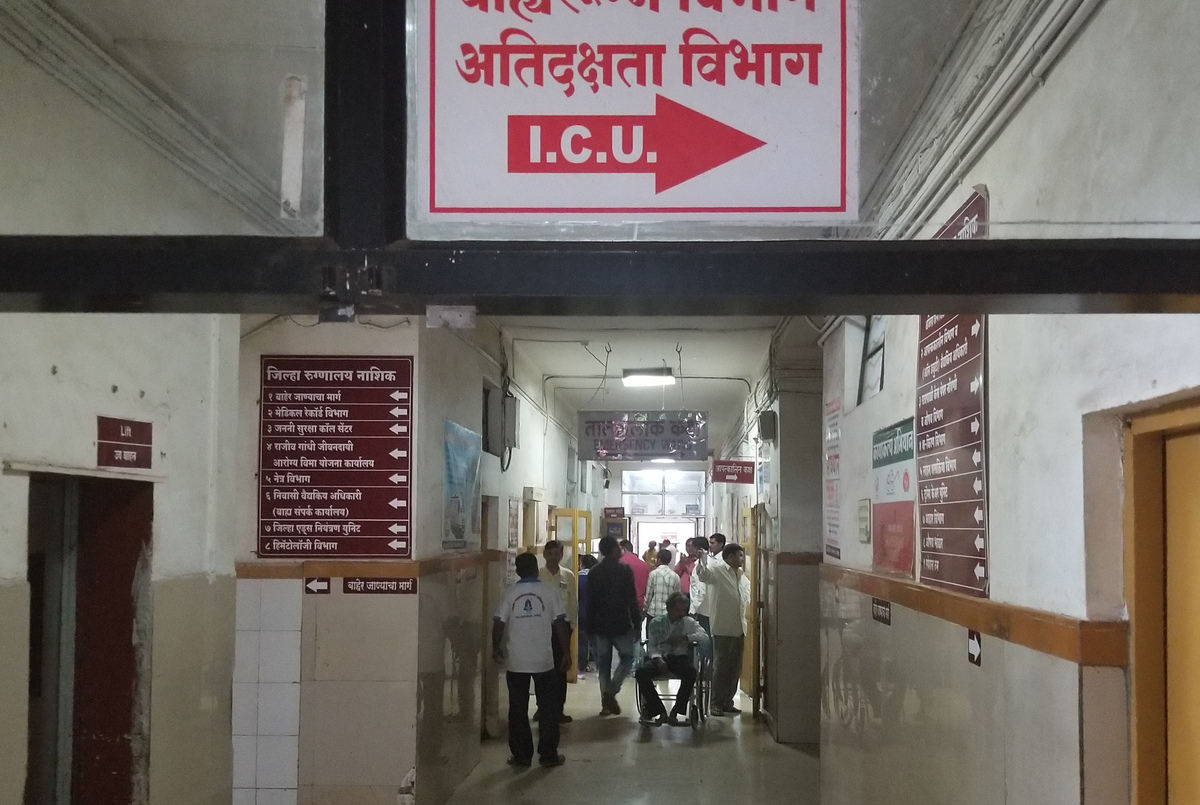 The Nashik Civil District Hospital is a government facility about 100 miles outside Mumbai. The director, Dr. Suresh Jagdale, acknowledges that the mortality rate is higher than that of private hospitals, but he says he's proud to offer free health treatment to India's poor.

In the marble halls of Mumbai's Kokilaben Dhirubhai Ambani Hospital, patients are greeted by chandeliers and floor-to-ceiling French windows.

There are autism and Alzheimer's clinics, genetic testing, clinical trials of new drugs and private rooms. Spinal injuries are treated in a special robotics rehabilitation unit, where patients are hooked up to robots to exercise their limbs.

And visitors can grab a Starbucks latte in the lobby.

At Sion hospital, 9 miles away, Shaheen Khan, 39, was brought in for gallstones in June. After waiting for eight days in a facility so crowded that patients share mattresses on the floor, she was told to go home and they'd call her when a bed opened up. She's now been waiting six weeks to hear back.

That's the tale of two kinds of health care in India – for the wealthy and for the rest of the country. But the prime minister hopes to change all that.

In his annual Independence Day speech on Wednesday, Narendra Modi is expected to unveil the biggest government health care program in the world. The plan is to roll it out by the end of the year – ahead of elections expected early in 2019.

"Health care should be accessible and affordable," Modi said on a radio program in March.

How did the country come to have such a vast divide in its health care?

Consider the Kokilaben hospital. Named for the matriarch of one of India's richest industrialist families, the Ambanis, who paid for its construction, the facility has 750 beds and a linear particle accelerator for radiation treatment. Its doctors perform nearly 1,000 neonatal pediatric cardiac operations a year — plus other procedures ranging from life-saving liver transplants to elective procedures like bariatric weight-loss operations and gender reassignment surgery.

Indeed, India is home to some of Asia's top hospitals. Medical tourists flock here from as far as the United States for surgeries like hip or knee replacements at a fraction of the price back home.

But hospitals like Kokilaben are for paying customers and those who have health insurance provided by an employer.

That does not apply to the vast majority of Indians.

Instead, experts say as many as 90 percent of people in India — if they get any health care at all — go to government-run hospitals, where care is free but far less sophisticated.

"They're poorly staffed. Equipment there often doesn't work. They have employees who sometimes don't show up," says Ravi Ramamurti, professor of international business and director of the Center for Emerging Markets at Northeastern University. "You may have to bribe every employee at every level of system. Medicines supposed to be provided for free are often not in stock. So if you really need care, you can't be sure you'll get it."

India's infant mortality rate is almost seven times that of the U.S., and more than four times that of China, Ramamurti notes. Less than 5 percent of Indians who suffer from heart problems actually get diagnosed and treated.

Modi, who is running for re-election, wants to fix that. His campaign includes a plan called Ayushman Bharat, or the National Health Protection Mission, which would offer the poorest half of India – more than 500 million people — health insurance to apply toward private hospitals. Each family would get more than $7,200 in annual coverage.

That might not buy a lot of health care in the U.S., but it goes a long way in India.

It could make a tremendous difference for patients like Khan, who lives in a one-room house in a Mumbai slum. Still in pain from her gallstones, she recalls what she was told when the hospital discharged her:

"They said, 'We don't have space in our hospital. There are so many patients, and there's a risk of infection spreading. So it's better for you go home,'" Khan says.

Khan is a widow who cleans houses for a living. But she has been unable to work since she fell ill this spring and is living off her brother.

Just as it does in the U.S., illness often bankrupts whole families in India.

People like Khan are the target of Modi's new health plan. The cost of gall bladder surgery at Indian private hospitals ranges from about $435 for a standard operation up to $3,000 for laparoscopic surgery — well within coverage limits under Modicare. If she'd been able to get surgery at a private hospital without delay, Khan could have been back at work already.

Critics say the best way to fix India's ailing government hospitals is to pour public money into them rather than subsidizing private care. But Ramamurti, author of a 2018 book about Indian hospitals called Reverse Innovation in Health Care, says that's just not realistic given the poor state of India's public hospitals.

"The idea of the government funding health care, but the actual delivery being done by the private sector — I think is a good model," he says. "The Indian public sector is pretty poor at delivering services. So to try to transform public health system is an enormous challenge. I think therefore, this is the lesser of the two evils."

India has managed to rein in infectious diseases. It eradicated polio in 2011. Government data show communicable diseases were nearly cut in half from 1990 to 2016. But there's been a corresponding jump in noncommunicable, so-called "lifestyle" diseases like diabetes and heart disease.

About 100 miles outside Mumbai, the Nashik Civil District Hospital is the largest government hospital in its province. It has 500 beds, and all of them are occupied. The facility draws patients from surrounding villages, and many of them are very poor.

Relatives camp out on the floor of noisy wards that hold dozens of patients. There are no private rooms. There's a bloodstained gurney near the out-of-service elevator.

It's a world away from the marble halls of the Kokilaben private hospital.

But on a July 30 visit to the Nashik facility, NPR found that every patient we approached expressed satisfaction with their care.

"Because it's totally free," explains the hospital's director, Dr. Suresh Jagdale. His hospital serves the poorest Indians, who he says feel lucky to get any care at all.

When he needs care, he comes here himself, he adds.

While care in public hospitals is free, patients often have to pay extra for certain prescription drugs or advanced therapies — if they are available at all.

Still, Jagdale says he feels proud to treat the poorest of India's poor. "We treat newborn babies here who are born weighing less than 1 kilo [about 2 pounds]," he says.

He acknowledges the mortality rate is much higher in government hospitals compared to private ones. But he says it's because patients on average are poorer, malnourished and arrive at the hospital in later stages of illness. Very few receive preventive care.

But the picture of health care in India is not completely bleak. This developing country has managed to provide free health care – however rudimentary.

Now Modicare seeks to improve it, and the solution, some say, is spending more money.

According to the World Bank, India spends only about 4 percent of its GDP on health care. The U.S., by contrast, spends nearly 17 percent.

Modicare is expected to cost the Indian government less than $2 billion annually. Experts say that's affordable, at least for now. India's economy is currently growing at 7.3 percent, according to the IMF. It's the world's fastest-growing major economy.

"One or two billion dollars is not more than what the Indian government can afford, but these programs have a way of exploding over time. Then it can actually get to be a bigger constraint," Ramamurti predicts. "These are programs you can never pull back. They can only expand over time." That means the government will have to spend more and more money.

For India's prime minister, Modicare is good politics. He is especially interested in winning the votes of the poor, who outnumber affluent Indians and have a higher voter turnout.

For India, it could be a giant step toward better health care for 1.3 billion people.