Accessibility links
New Law In Nepal Offers Immediate Compensation To Survivors Of Acid And Burn Attacks : Goats and Soda In the past, survivors of acid and burn assaults could not get immediate compensation for treatment. The criminal code now addresses that issue — and sets stiffer penalties for perpetrators. 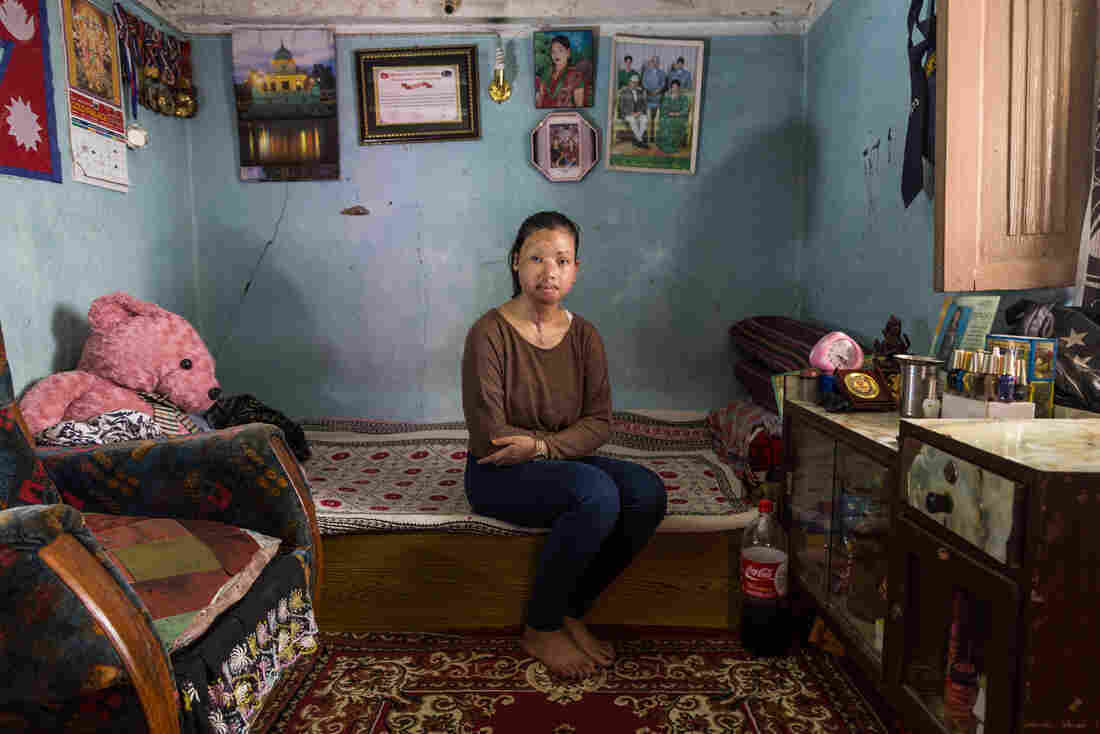 Sangita Magar bears the scars of an acid attack that took place three years ago. She was a plaintiff in a public interest case to change Nepal's law on acid and burn violence. Sajana Shrestha for NPR hide caption 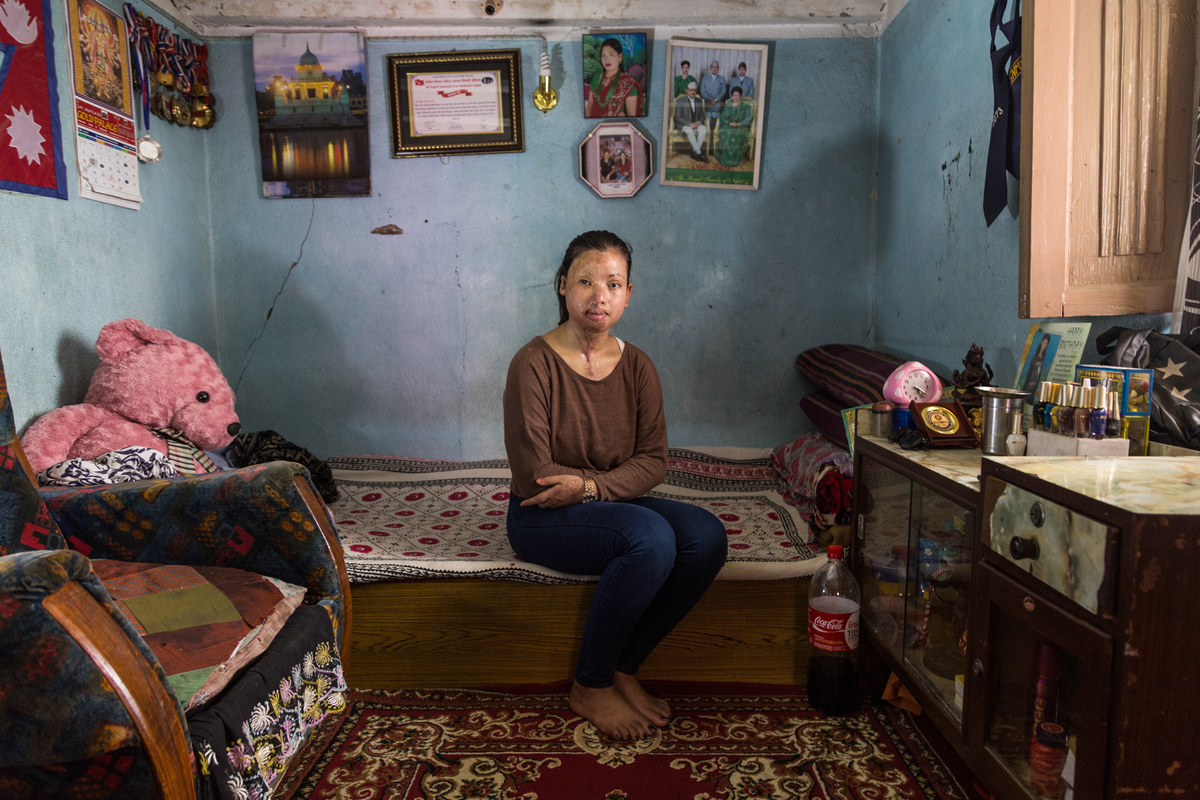 Sangita Magar bears the scars of an acid attack that took place three years ago. She was a plaintiff in a public interest case to change Nepal's law on acid and burn violence.

Three years ago early on a February morning, 16-year-old Sangita Magar had just arrived at a prep class for her high school exams in Kathmandu. Her friend Seema Basnet was asking Magar for help with an accounting problem when the door flung open and someone threw liquid in Magar's face, splashing Basnet too.

Magar later learned that her attacker, Jiwan B.K., was a tenant in the apartment building where she lived with her family. According to Magar, B.K. had gotten into a fight with her brother about the shared bathroom in the building and took it out on Magar by attacking her with acid.

Magar suffered horrific injuries. Raised scars run across her arms, chest, stomach and much of her face. She nearly lost her eyesight and must wear plastic tubes to keep her right nostril and ear canal from closing for the foreseeable future. Three years later, she still needs surgeries to loosen the tight, scarred skin on her face. 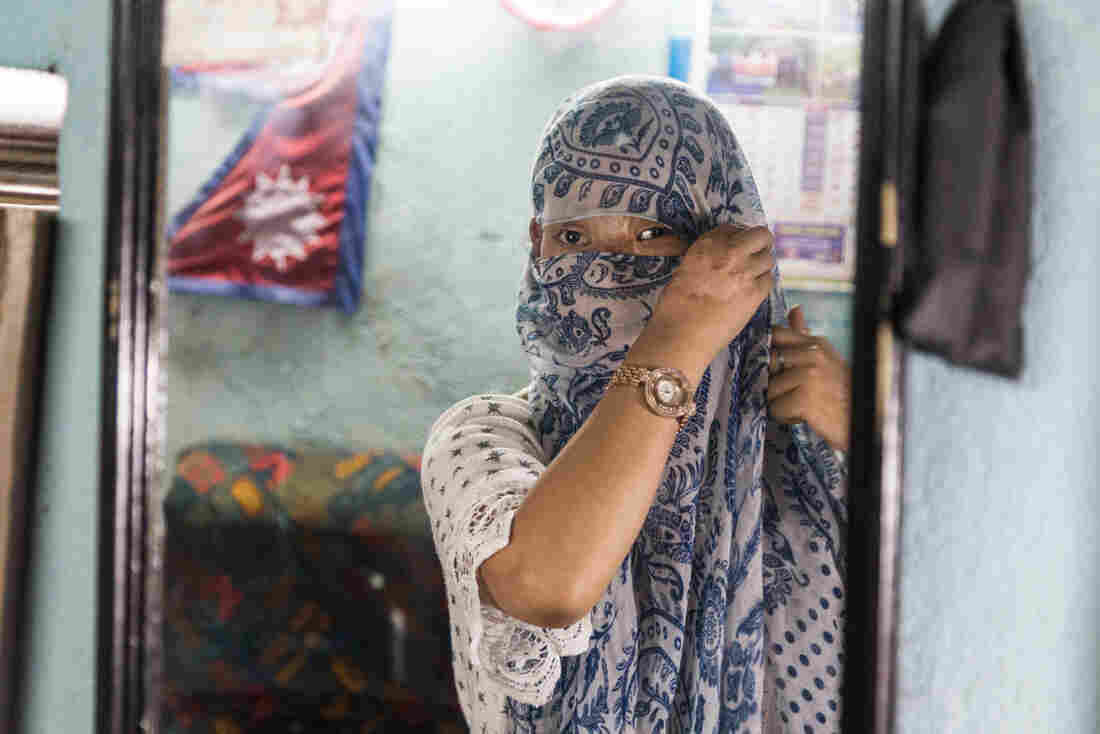 Sangita Magar always covers her face with a scarf and large sunglasses before leaving home. She says she's comfortable with her scars but doesn't like to deal with people staring. Sajana Shrestha for NPR hide caption 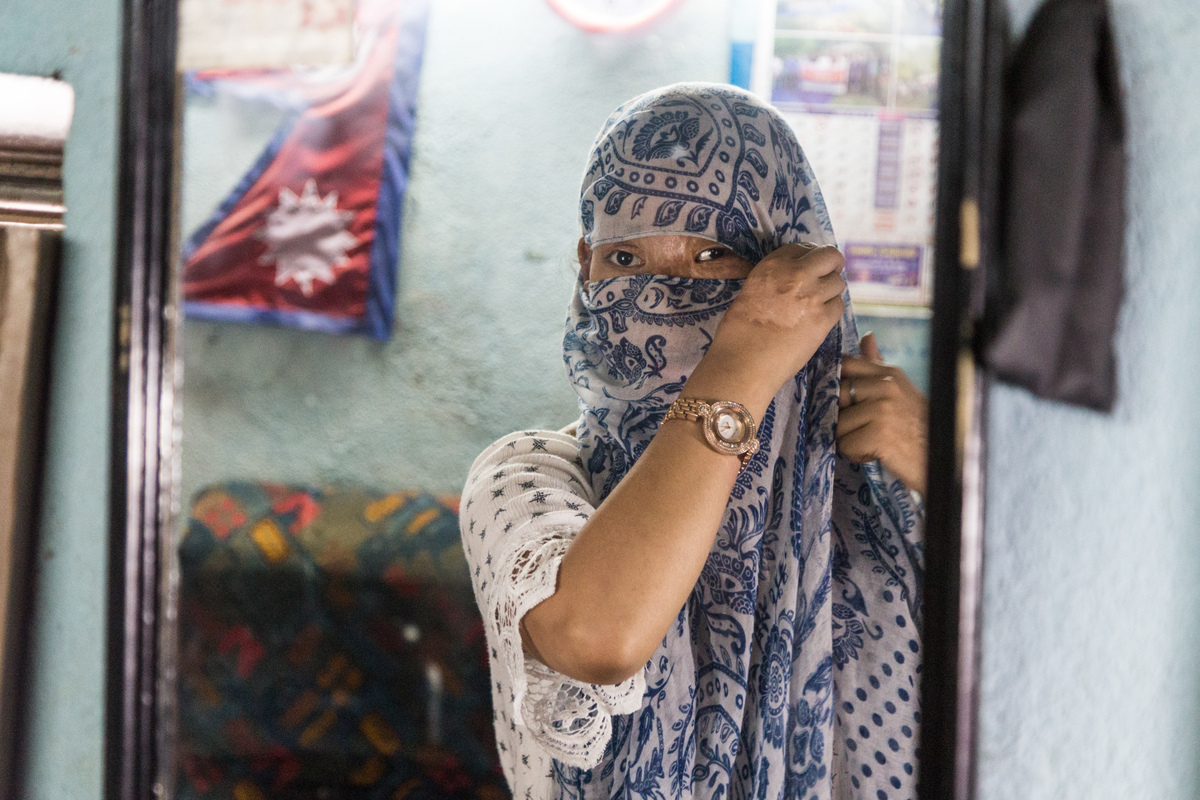 Sangita Magar always covers her face with a scarf and large sunglasses before leaving home. She says she's comfortable with her scars but doesn't like to deal with people staring.

This kind of attack occurs around the world, mainly in lower-income countries and are mainly aimed at women. But in Western countries, including the United Kingdom, it's a rapidly growing problem. And there, bucking global trends, victims are more often men.

In Nepal, Magar became involved in an effort to change how Nepal's legal system deals with this kind of assault – with new laws enacted this month.

Under Nepali law at the time of Magar's attack, no compensation was available to victims of acid or burn violence (setting a victim on fire) unless perpetrators were convicted and had the resources to pay fines. Most Nepalis lack health insurance, and while the government provides free treatment for certain conditions, injuries from acid and other burns were not covered. Severe burns require immediate and extensive treatment; for those who can't afford it, the damage can be catastrophic.

In June 2017, Magar was one of two plaintiffs in a public interest case that challenged Nepal's laws on acid and burn violence. As a result, the Supreme Court ordered that victims should get immediate financial support from the government to cover treatment. This change came into effect on Aug. 17 as part of a new civil and criminal code, intended to modernize the legal system. The new code also strengthened other laws related to gender-based violence, including longer jail sentences for rape and criminalizing the practice of secluding menstruating women outside the home. In the wake of Magar's case, the court also ordered the government to begin regulating the sale of acid, which is freely available at local shops for purchase for agricultural and manufacturing purposes; this provision has not yet been put in place.

It is difficult to get an accurate count of how many incidents of acid violence occur in Nepal each year. Burn Violence Survivors (BVS-Nepal), a Kathmandu-based organization that helps survivors of acid and burn violence, has recorded about 40 cases of acid attacks annually over the past eight years, but researchers and representatives of advocacy organizations caution that massive underreporting makes statistics unreliable.

Sital Kalantry, a human rights researcher and professor at Cornell Law School, says real numbers are incredibly difficult to verify because most countries don't keep records specifically of acid violence. Acid Survivors Trust International, based in London, says that about 1,500 attacks are recorded globally each year — but suggests that 60 percent of cases globally go unreported each year. For example, ASTI executive director Jaf Shah estimates that over 1,000 attacks occur annually in India, despite reporting of around 300 per year.

The number of attacks in the United Kingdom is notable: Figures from the London police obtained by CNN show a 600 percent increase in attacks in London from 77 attacks in 2012 to 465 reports in 2017. The high numbers likely reflect better reporting in the U.K. than other countries.

"There is a great deal of misinformation being spread around acid attacks by alt-right sites which, contrary to any evidence, argue that Muslims and immigrants are to blame," Shah wrote to NPR by email. Shah says early evidence from police reports points instead to criminal and gang activity, with no clear ethnic or religious trends.

Both Shah and Kalantry cite the availability of acid as a predictor of where attacks will happen more. Kalantry says you see more attacks around locations that use a lot of acid in industry and where guns aren't so easy to obtain. But she and other researchers say acid attacks should be understood primarily as a form of gender-based violence with a particularly devastating weapon. In a 2011 report Kalantry co-authored, the researchers found that most acid attacks in Bangladesh, India and Cambodia were by men against women whom they had a personal relationship with. Most of the victims in Bangladesh and India are women who stepped outside of traditional gender roles, according to the report.

Lighting someone on fire is another form of violence most often directed at women in Nepal, says Pratiksha Giri, executive director of BVS-Nepal, the organization supporting acid and burn survivors. Survivors of burn violence will also be eligible for treatment costs under the new law, but while acid attacks are unambiguous, fires can be more easily disguised as an accident. It can be especially hard for women to report these crimes when the perpetrators are family members whom they live with and depend on, Giri explains. 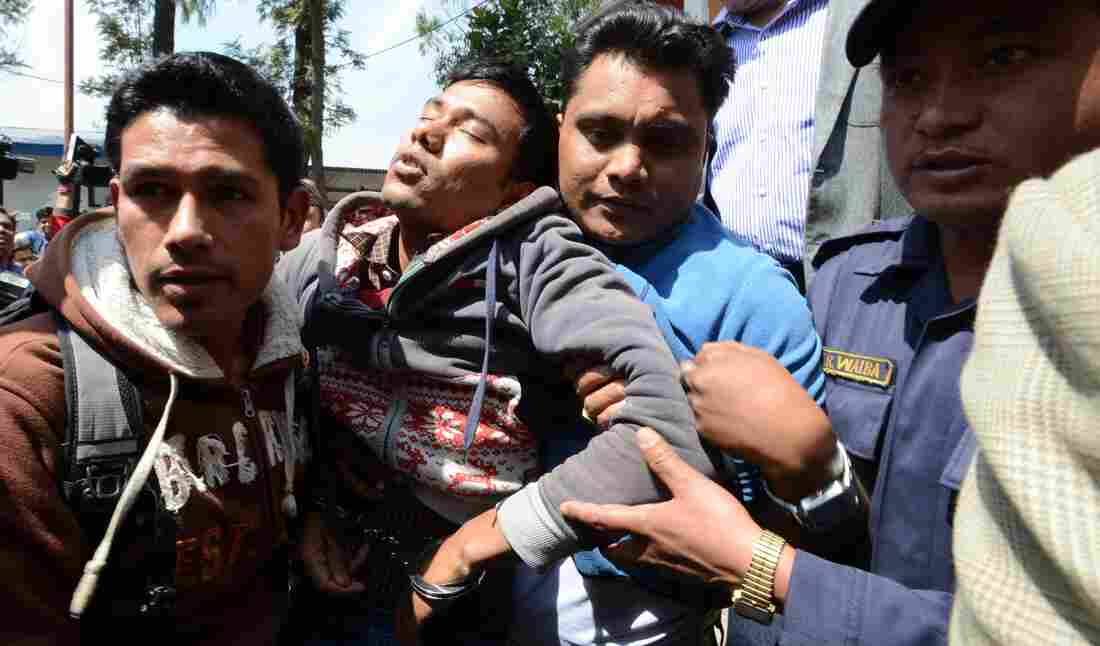 Jiwan B.K., who fainted in front of the media in Kathmandu in March 2015, confessed to attacking Sangita Magar, saying he did so because she refused his romantic advances. Prakash Mathema /AFP/Getty Images hide caption

In 2014, Rihanna Dhapali's husband and mother-in-law set her on fire over a dowry dispute, then kept her home for days without treatment; she was seven months pregnant at the time and lost the baby. Dhapali was Sangita Magar's co-plaintiff in the public interest lawsuit that reached Nepal's Supreme Court and triggered the change in the law.

The criminal case involving Sangita Magar previously spurred the government to specifically criminalize acid and burn violence in 2015. Before that, cases could only be tried as an equivalent to battery, with punishments as low as two months in jail or a fine of about $10, or as attempted murder, which can be harder to prove and does not come with compensation, says Sabin Shrestha, executive director of the Forum for Women, Law and Development, who tried the public interest case alongside BVS-Nepal. The new law strengthened the punishment for perpetrators who will now be subject to prison terms of five to eight years and fines of 100,000 to 500,000 rupees (about $890 to $4,450), depending on the extent of the injuries.

Jiwan B.K. confessed to the attack, saying that he targeted Sangita Magar because she refused his romantic advances, according to Magar's lawyer, Bindu Khadka. This was widely reported in local media and fits a common narrative given for acid attacks: unrequited love. When asked about this, Magar bristles. "They're taking the criminal's confession as truth," she says. She is certain she was attacked because of the fight B.K. had with her brother and believes he falsely confessed to the jilted lover narrative in hopes of a lesser sentence.

Advocates hope the new law will not only help victims of acid attacks and burn violence but also change the social norms that allow gender-based violence to proliferate. After Bangladesh introduced legislation specifically criminalizing acid violence (with punishments up to the death sentence) and also controlling the sale of acid and providing financial assistance to victims, the number of attacks plummeted. From a peak of 494 reported attacks in 2002 — the year the law was passed — just 44 attacks were reported in 2016, according to data from Acid Survivors Foundation, an organization that works with survivors in that country.

The new law in Nepal won't actually help Sangita Magar. Although her attacker was convicted of her attempted murder in 2015 and sentenced to 10 years in jail, the provisions won't work retroactively. So she won't receive any official compensation. But she takes comfort in the impact she hopes her case will have on Nepali society: "From my case, others won't be victims of acid attacks, and criminals who do acid attacks, or think to do them, will know the rules."

Danielle Preiss is a freelance print and radio journalist based in South Asia. She tweets @daniellepreiss.