Accessibility links
Syrian Refugees In Jordan Start Surprising Businesses — Including Rent A Wedding Dress : Goats and Soda On a dusty street in Jordan's largest camp for Syrian refugees, there are some unexpected businesses. 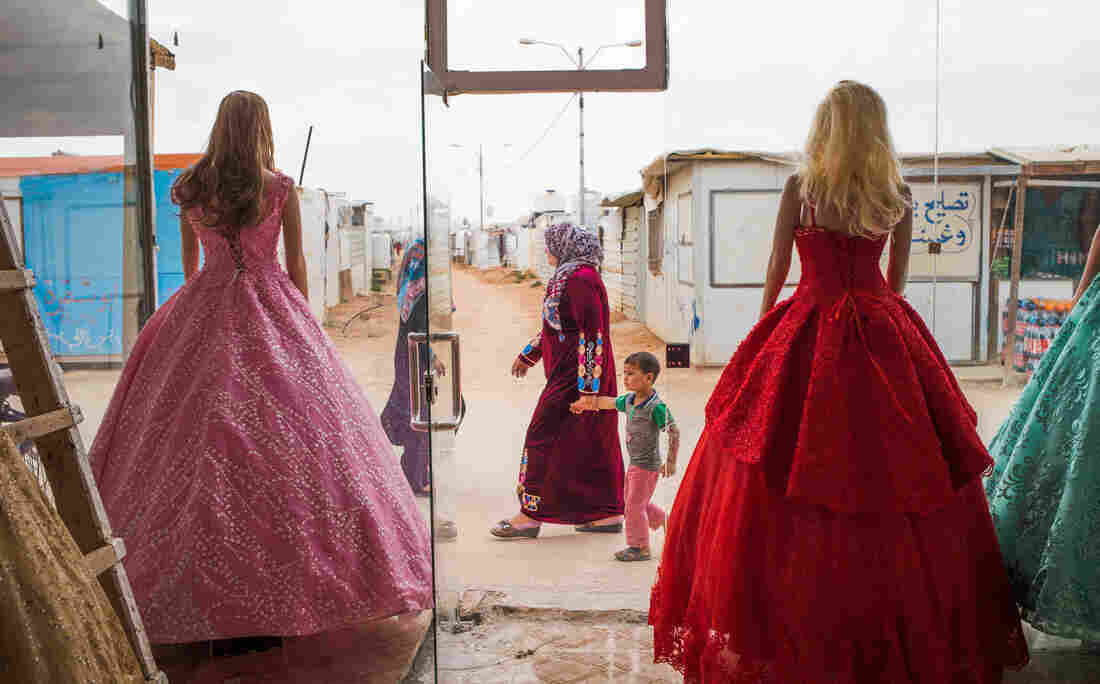 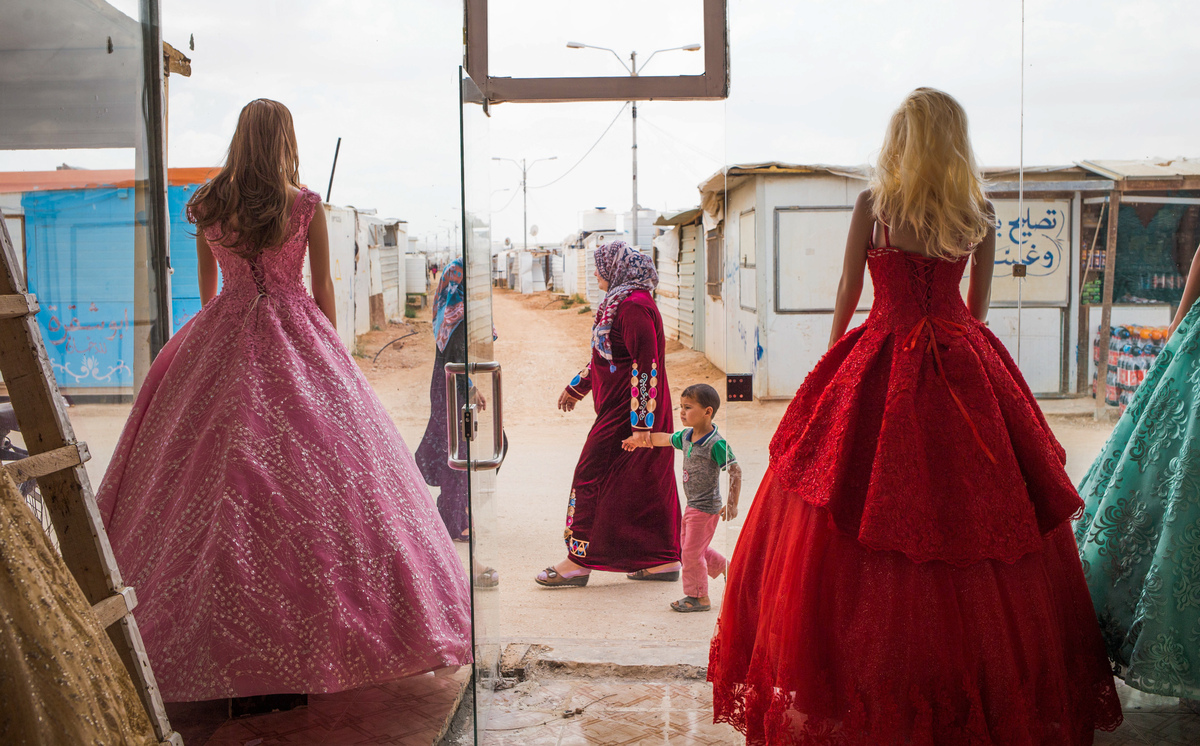 Wedding dresses come in bold hues at Salon Al Fardous — Paradise Salon. The rent-a-gown shop looks out on the temporary housing and makeshift stores in the Zaatari refugee camp in Jordan.

A Syrian refugee camp in the desert is an unlikely place to rent a wedding gown — until you step inside "Salon Al Fardous" or "Paradise Salon." It's housed in one of the trailers that line Market Street, the main road of Zaatari, Jordan's largest camp for Syrian refugees.

In the large windows are gowns in shades like brilliant red and turquoise (white is not necessarily the color of a bridal gown in Muslim traditions). And inside the store there are dozens more -- for brides and members of the bridal party of all ages.

When I entered, I was greeted by a cheer from the owners, an effervescent Zeyneb Assaf and her smiling husband, Hussam Assaf. I nearly forgot where I was, the extreme poverty of the camp and the war that was its cause. A little girl burst through a door twirling in a white princess dress. She posed briefly for the camera before amid the colorful clothes. 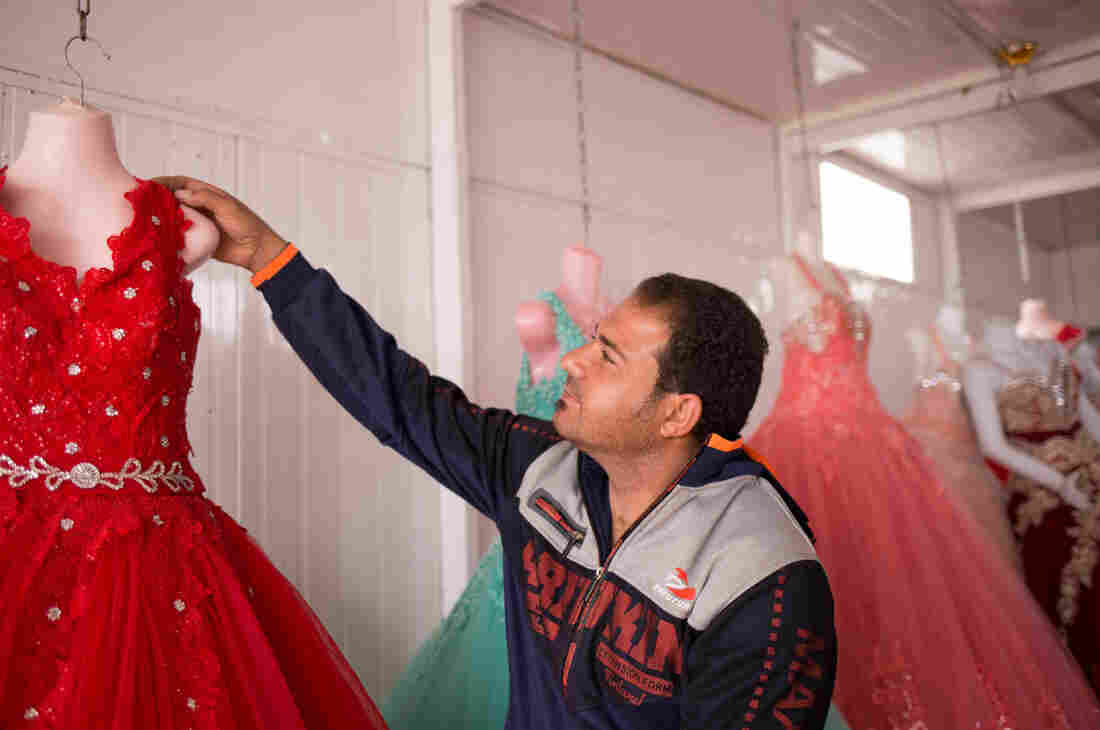 Hussam Assaf adjusts a dress in the rent-a-wedding-gown shop he runs with his wife in the Zaatari refugee camp. Adib Chowdhury hide caption

Photojournalist Adib Chowdhury and I were on assignment for iguacu, an independent charity that investigates humanitarian crises. We had spoken at length with Syrian refugees who had lost everything in the seven-year conflict. There are now some 80,000 refugees in the Zaatari camp, which opened in 2012.

Paradise Salon is one of an estimated 3,000 informal stores along the vibrant and dusty Market Street, where refugee entrepreneurs defy displacement. They don't have any licenses, they don't pay taxes. But there they are.

"We have to live our life, we have to continue," Hussam declares. "To do nothing is not an option. We have to do something." And life goes on, even in the camp. During the summer wedding season, the Assafs say they rent out about five dresses a week for the equivalent of about $35 to $45 apiece.

Hussam was a carpenter in his hometown of Daraa, Syria, and his wife was a hairstylist — until they fled about four years ago. Daraa was one of the hotbeds of the rebellion.

"We came up with this idea, together, one day in the camp," he explains. "I would rent the gowns, she would do the hair and makeup. She supported me a lot and we succeeded together."

They started their business in 2014, purchasing four wedding dresses from a business in Amman.

Scraping together the money to buy the gowns was a struggle. "I had two rings that I had to sell," Hussam says. Zeyneb pipes in from the corner of the shop's room where she was taking a break: "The biggest challenge was the money! ... And the dust! The dust is killing us, and there's no water." The lack of water, they say, makes it difficult to wash the gowns. 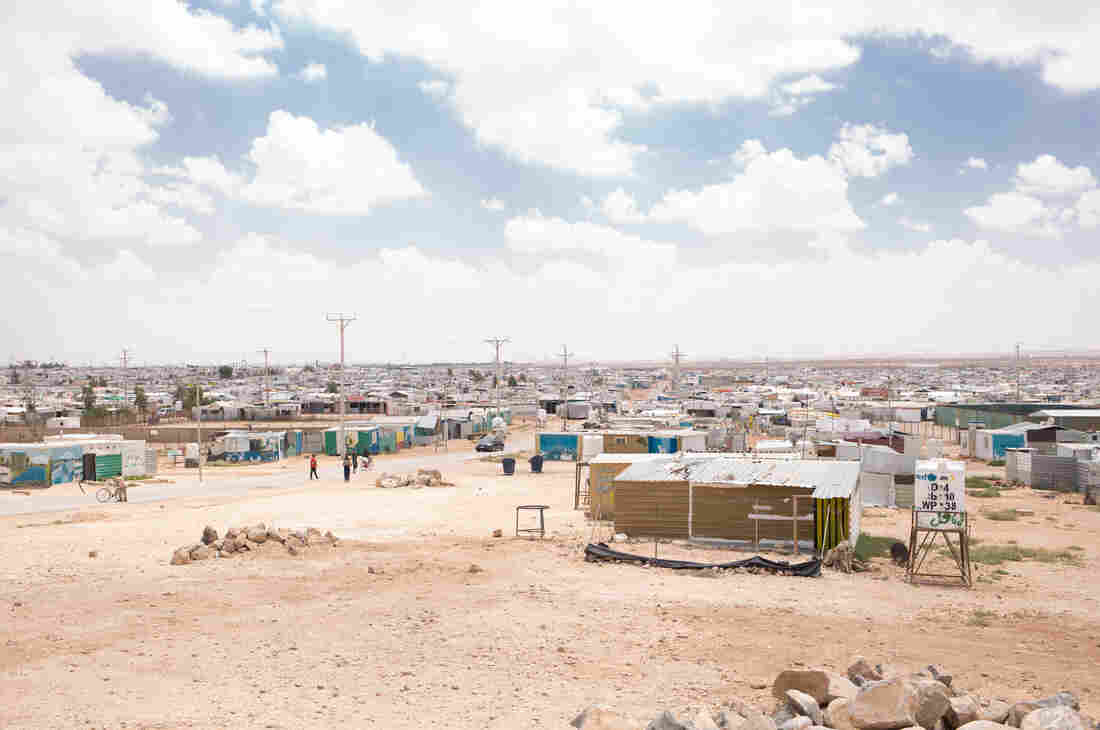 The Zaatari refugee camp, located in Jordan, is home to some 80,000 Syrians who fled their country because of the conflict. Adib Chowdhury hide caption

Four years later, they have competition in the form of other wedding rent-a-dress shops. So they are always striving to stand out. "Yesterday, we repainted the place," Hussam says.

The money they make definitely helps. In the camp, there are food distributions and vouchers handed out by the U.N. and some "cash-for-work" programs run by charities, but many families struggle and do not have three meals a day.

They're not the only upbeat venture in the camps.

Down the street from Paradise Salon is "Paris Perfume," run by Ahmad Atalla. He'd run a perfume shop in Syria, so it seemed natural to him to try to rebuild it in the camp. "That's my trade, that's what I do. That's what I like," he says.

To create a business in such a place means literally starting from scratch.

"We began very small," says Atalla. "First, we had only a tent, with a small stand. Next we had a corrugated panel shack. Then we bought a caravan [the prefab structures that line the street]."

"Getting the products was hard. We had to get a permission from the police to exit the camp and try to find affordable merchandise in Jordanian towns."

The shopkeepers also faced criticism from fellow refugees. Some of them have a difficult time with the idea of settling into life in the camps rather than focusing on a possible return home or making it to another country.

Even as they celebrate their success, the memory of a devastating war is ever-present. Atalla remembers "the bombings and the fear — the fear for the children's safety." A father of three, more at ease selling perfumes than handling weaponry, he had refused to fight. "I was supposed to be conscripted for the army, but I didn't want to fight for either side," he says. "Because of this, there is a warrant for my arrest."

The shopkeepers are proud of their ventures but still dream of a different life.

"It's just a way to survive," Atalla says. "I just want to go back home. I'm hoping to resettle, for the sake of my children. For us, it's too late. But my kids are young, the bigger is 4 years old. I want to give them the chance to build something elsewhere. I don't want their future to be lost, like their parents."

When she learns I am French, Zeyneb starts clapping, yelling out, "French! We want to migrate to France! Is France taking in any refugees?"

She hopes there's room for "just one extra family," she says, bursting out laughing. Hers.