Accessibility links
Inspired By Wine Uncorking Demo, Car Mechanic Invents Device For Difficult Childbirth : Goats and Soda Jorge Odon became a world celebrity — and the subject of a 'Jeopardy' question even — with his invention. But it hasn't made it to market yet. What's the timeline? 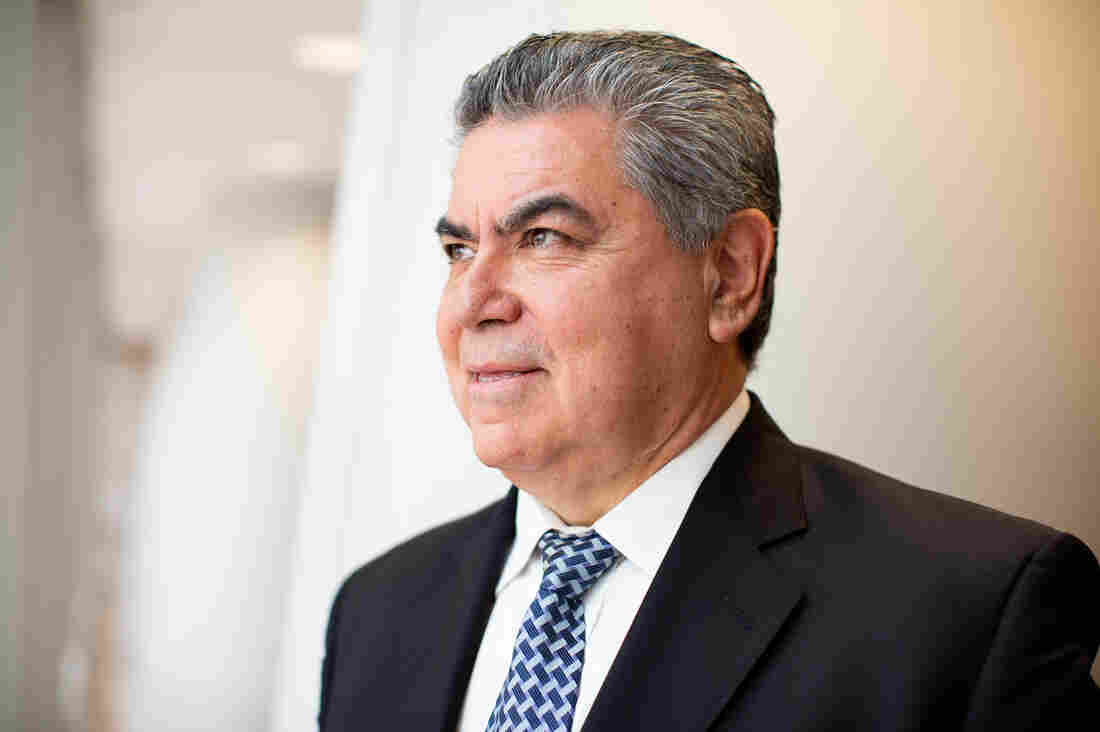 Jorge Odón, inventor of the Odón Device — described in a past NPR story as a tool for "popping a baby out like a cork." Pearl Mak/NPR hide caption 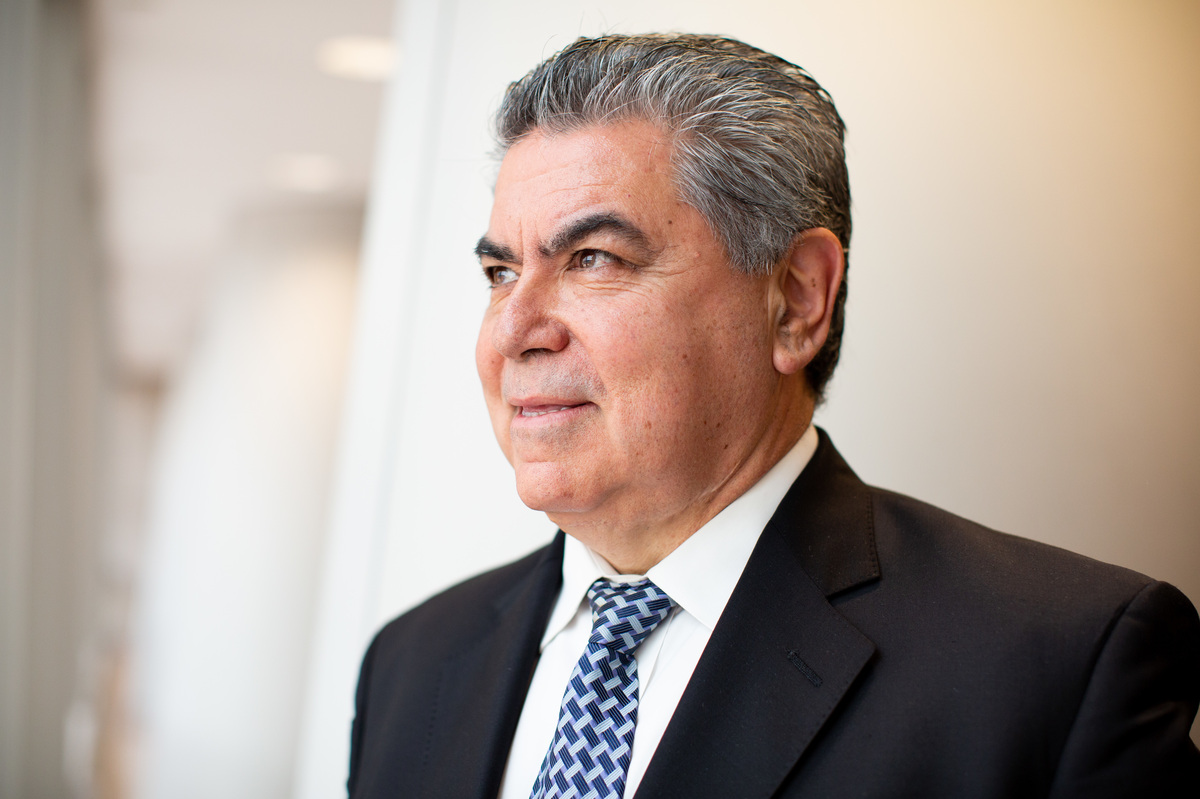 Jorge Odón, inventor of the Odón Device — described in a past NPR story as a tool for "popping a baby out like a cork."

In 2013, NPR reported on an improbable inventor: Jorge Odon, a middle-aged car mechanic who — inspired by watching a stupid party trick — designed a medical device that could revolutionize childbirth. Here's how we described it: "The Odon Device ... guides a folded plastic sleeve around the baby's head. A little bit of air is then pumped between the two plastic layers, cushioning the baby's head and allowing it to be sucked out."

The idea is that the device would be a boon during a difficult delivery — prolonged second-stage labor, for example. When Jorge Odon visited Washington, D.C., for a health-care event this year, we checked up on the progress of his project.

Back in 2006, Jorge Odon was a 52-year-old mechanic who ran an automobile alignment and wheel balancing service center in Lanus, Argentina, a city just south of Buenos Aires.

On the side, he liked to tinker around with car-related inventions in his garage.

One day, very different inspiration struck after watching two employees compete to get a loose cork out of the bottom of a wine bottle using a technique they'd seen on YouTube.

It's just a few steps: Insert the closed end of a plastic bag into a bottle, tilt the bottle until the cork is touching the bag and blow into the open end of the bag. The bag will inflate like a balloon and envelop the cork. Then give the plastic bag a hard tug. The bag and the cork should come out together.

And this random idea popped into Odon's head: He wondered, could you use a similar method to help women having complications in labor? A bag could wrap around the baby's head, and voila, out comes the kid.

Flash forward to November 2013. Odon's idea had transformed into a prototype, captured the attention of the World Health Organization (which conducted tests using it), and was licensed by BD, a giant medical technology company based in New Jersey. An article ran on the front page of The New York Times with the headline, "Car Mechanic Dreams Up a Tool to Ease Births."

Tons of folks read it, including Chiara Atik, a New York-based playwright who posted it on Facebook. She then decided to write a play about it. Bump, as in the cutesy term for a pregnant belly, was developed through the Ensemble Studio Theatre/Alfred P. Sloan Foundation Science & Technology Project, a program supporting the work of artists tackling topics related to science and engineering. 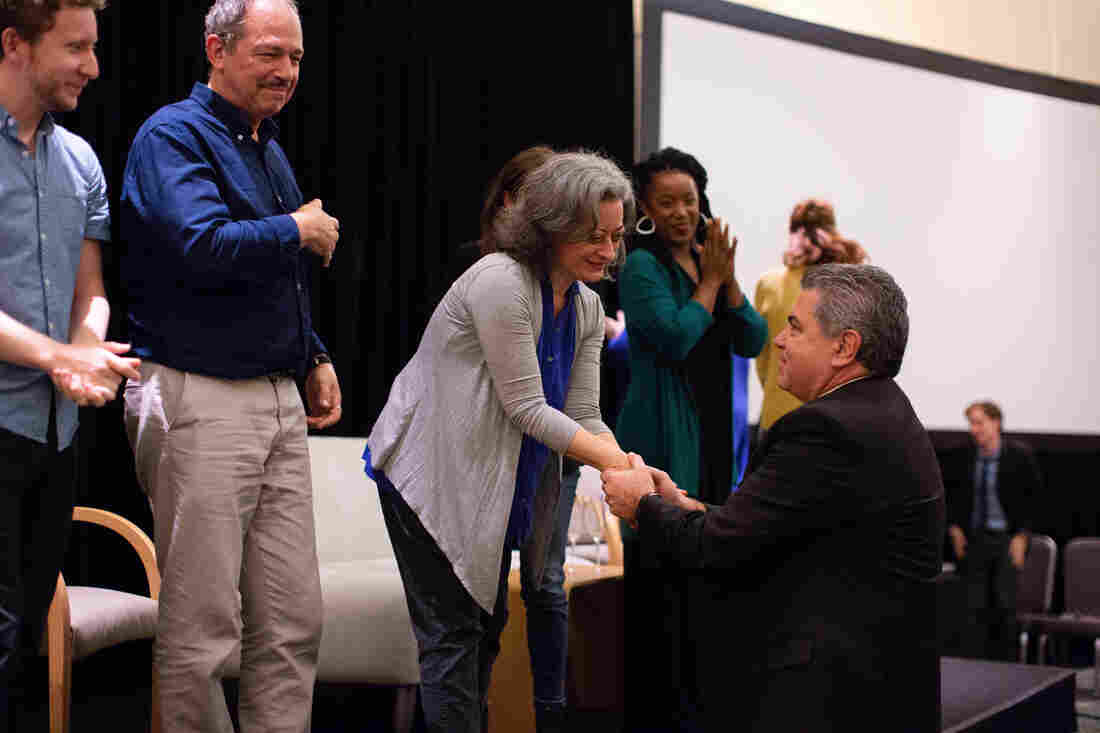 Jorge Odón and the cast of "Bump," a play about the origins of the Odón Device. The production had a New York run this year. Pearl Mak/NPR hide caption 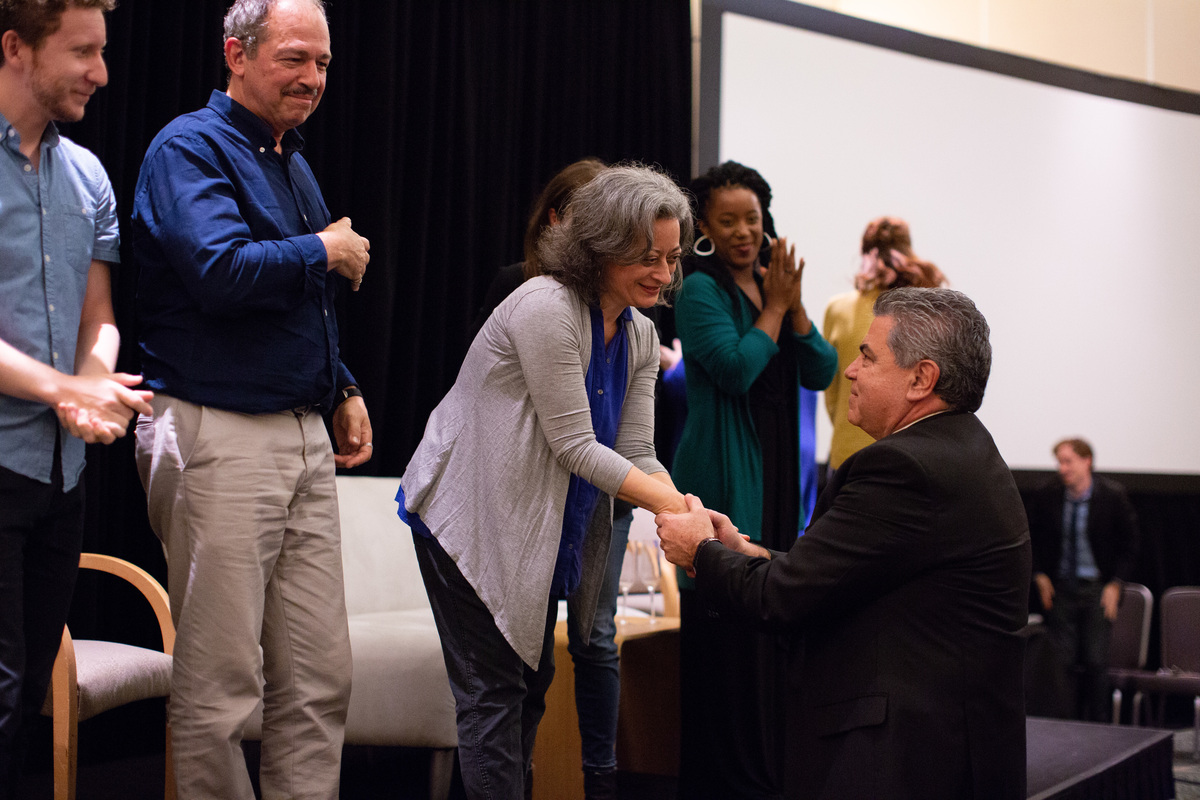 Jorge Odón and the cast of "Bump," a play about the origins of the Odón Device. The production had a New York run this year.

The show, which ran for a month in New York this year, is a 90-minute work of fiction, not a bio, which is why Atik gave her character a different name, Luis Vasquez. But it borrows the arc of Odon's story as well as several specific events, including the time he commandeered his daughter's baby doll for testing purposes and when he first revealed his out-of-the-blue idea to his family. (A character playing his daughter quips, "You saw an unrelated video on YouTube and parlayed it into an invention that you made in your garage that you think might help the medical profession. Is this ... what it's like to be a man?")

"I was supposed to be laughing, but it made me cry," says Odon, through a translator. He and his wife were both deeply touched by the production, which they caught just before it closed in June. Anything he'd change? "Maybe I could be played by someone more elegant and good looking," he jokes. Mostly, he was just stunned to see a play all about him. A decade ago, "I would have fainted if you said I was going to be the subject of a show," he says. But now it's just one more incredible thing that's happened as a result of that bottle brainstorm.

Odon — a man who really does faint when he has blood drawn — has been present at 47 births testing his device. (He'd have been at one more, except he got caught in traffic.) He's been the subject of a Jeopardy question. (A contestant won $800 for correctly asking, "What is birth?" in response to the clue, "After seeing a video about removing a stuck wine cork, Jorge Odon invented a medical device to ease this process.") He's traveled the world meeting fascinating people, including Pope Francis. Speaking with him after a 2015 mass in Vatican City was "one of the most important moments of my life," says Odon, who notes, "He remarked that he had been born with forceps."

In fact, many babies all over the world are still delivered using forceps, a device often said to resemble salad tongs that dates back to the 16th-century. Applied to a baby's head, they can help guide a baby out of the birth canal.

It's very economical, says Aaron Caughey, chair of the Department of Obstetrics and Gynecology at Oregon Health & Science University. "All you need to do to use them again is clean them."

Plus, forceps work well — as long as doctors are well-trained, he adds.

But that's often not the case. Vacuum-assisted delivery, which involves placing a suction cup on the top of a baby's head, came into vogue several decades ago. Because of this, fewer folks have learned how to use forceps, even though, Caughey explains, vacuum-assisted delivery is less effective. The end result is the alarming rise in the number of cesarean section deliveries.

Doctors without the necessary experience are right to be wary because forceps can cause serious complications, adds neonatologist Tonse Raju, chief of the Pregnancy and Perinatology Branch at the Eunice Kennedy Shriver National Institute of Child Health and Human Development. He once cared for a baby in Chicago who needed a blood transfusion after a forceps delivery gone wrong had caused a major hemorrhage. For moms, he notes, forceps can also raise the risk of severe vaginal tears.

So it's problematic that in lower-income settings, where C-sections aren't feasible, forceps are often the only option available, Raju adds. In these places, more choices could equal fewer moms and kids dying in childbirth.

The promise of the Odon Device is that it takes an entirely new approach. The bag grips near the chin, enveloping the entire head. (Remember, babies don't actually breathe air until they're born, so covering the nose and mouth is no problem.)

It may have been helpful that Odon never had any medical training — as a character in the play observes, because of his background, he viewed childbirth as a mechanical process rather than a biological one.

So why isn't the device already in hospitals everywhere? That's maybe been the biggest surprise for Odón. "If they had told me at the beginning that it would take 12 to 15 years, I would have said that was craziness," Odón says. But he understands why it's important to get every detail right before making the product available to the public.

Gary Cohen, BD's executive vice president, acknowledges that the process is taking about twice as long as the company had originally predicted. "We underestimated how complex and challenging it would be," he says. "But every specification has to be vetted."

Two major criteria have been determining the positioning of the device and the amount of pressure applied to the baby's head, explains Mario Merialdi, senior director of global health at BD. (Incidentally, he was the guy from the WHO who first believed in Odón. Merialdi came to Buenos Aires for a conference and had agreed to a 10-minute appointment with Odon on the side, which ended up lasting hours. "It was so obvious that this could have an impact," Merialdi says.

A 2017 article in BJOG: An International Journal of Obstetrics and Gynaecology details the tweaks that have been made to the device as it's gone through multiple rounds of testing. Participating obstetricians and midwives used it to deliver hundreds of simulator mannequin babies, and their feedback was used to improve the design as well as the accompanying instruction materials. For example, the pumping bulb that inflates the plastic bag was kind of slippery, so a fabric cover was added. The instruction video was slowed down, and the captions were enlarged.

The company has sunk about $20 million into the process, although the device remains fundamentally the same. The main components: Something that kind of looks like a toilet plunger, which finds the baby's head, and a bag made of a type of plastic chosen for its flexibility and strength.

Now the light is at the end of the, um, birth canal. A clinical study is about to start, led by the University of Bristol, and funded by the Gates Foundation (which is a funder of NPR and this blog). It'll include subjects in the UK, France and India and is expected to take 18 months.

Experts in the medical community will be eyeing the research results carefully. Raju the neonatologist says he's intrigued by the idea but wants to see more data. The complication rate for the 49 mothers who participated in an earlier pilot clinical study "worries" him — two-thirds had vaginal, cervical or first/second degree perineal tears. "It's not ready for tomorrow," he says.

Cohen says that once the Odon Device is on the market — which could be as early as 2020 — BD will team up with physicians' groups globally to help it become a part of standard training and protocols. The company is also seeking out partners with reach into remote areas, where the device will be offered at a lower cost than in wealthier parts of the world. (The company expects to offer it for about $25 to the public health sector in low resource countries, and three to four times more in developed countries.)

In the meantime, Odon is back to tinkering. While his son runs the family's business in Lanús, he can now fully devote himself to new medical innovations. He's mum about the specific project he's tackling, but it's "something related to biopsies." Having already gone through the development process once with his birth device, Odon thinks this invention will be ready faster.

"With the Odon Device, you're working with the lives of two individuals," he says. "This is one, so that's easier."