Accessibility links
Whatever Happened To ... The Street Kid Whose Life Was Saved BY Kindness? : Goats and Soda Kennedy Odede was a homeless kid in the slum of Kibera in Nairobi, Kenya. Now he's the founder of a successful nonprofit helping his community. How are he and his group faring? 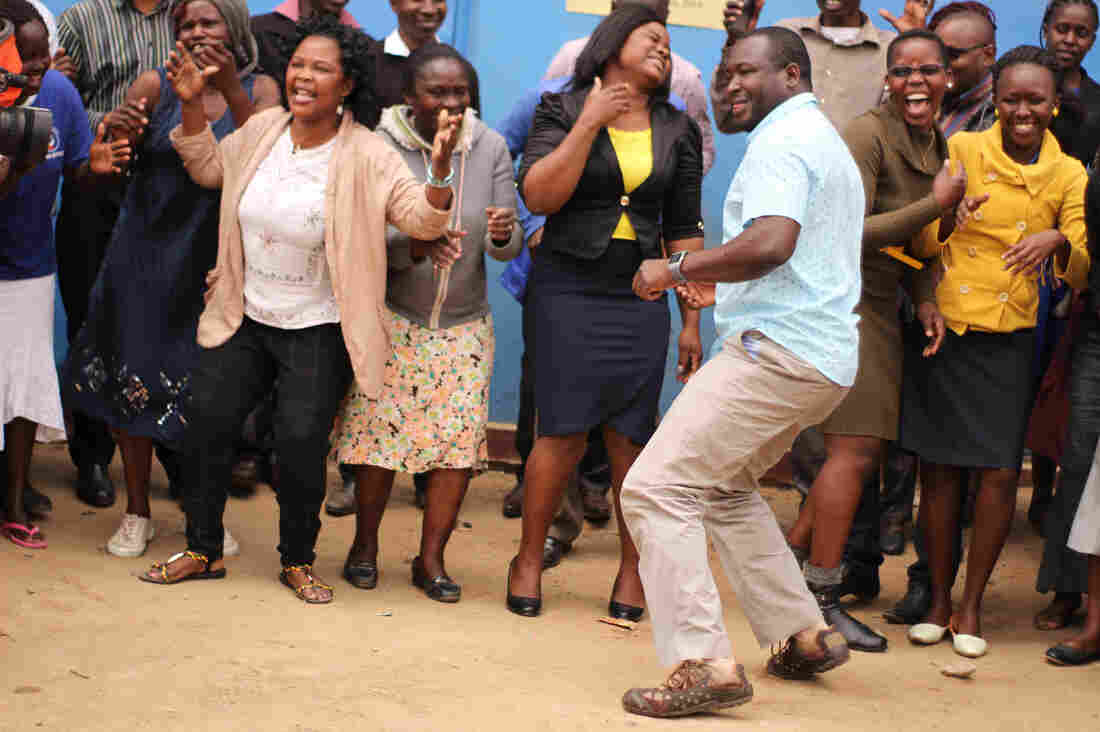 Kennedy Odede (in blue shirt) is dancing for a good reason. The charity he and his wife started has been awarded the $2 million Hilton Humanitarian Prize. He's joined by residents of Kibera, the neighborhood in Nairobi where his nonprofit group provides educational, health and clean water services. Anwar Sadat hide caption 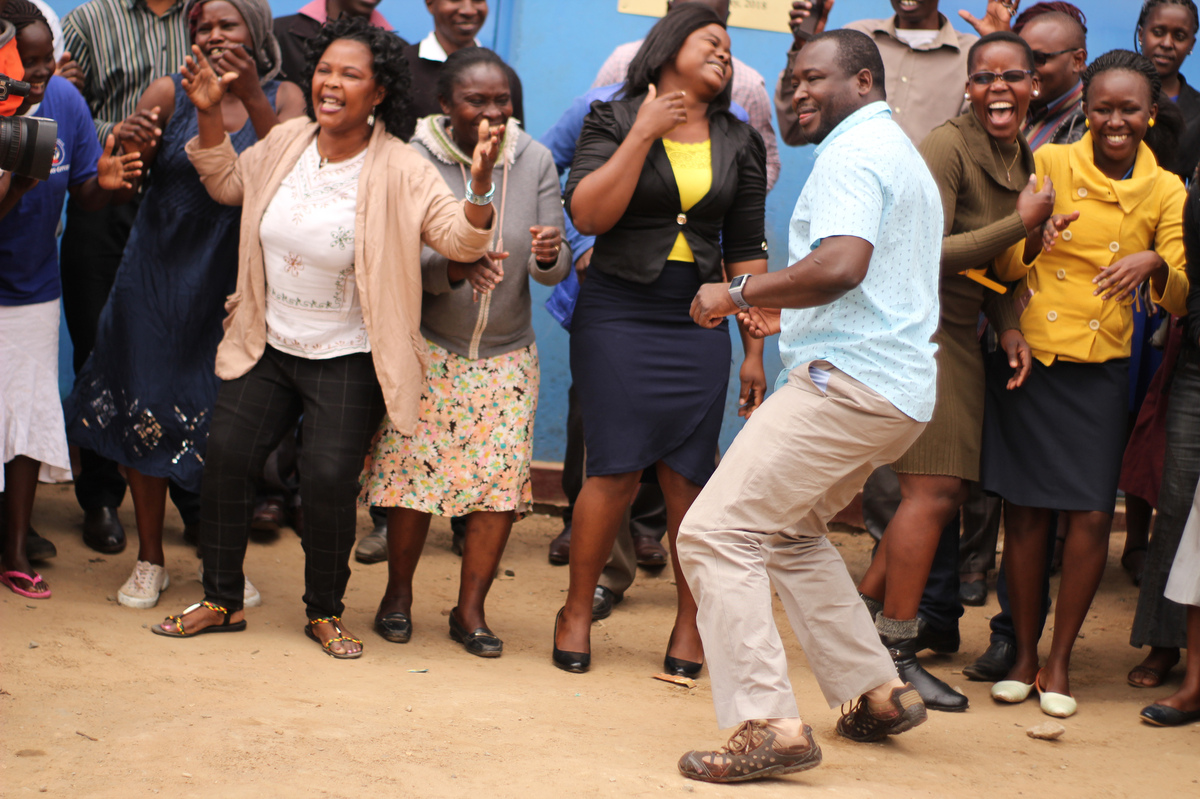 Kennedy Odede (in blue shirt) is dancing for a good reason. The charity he and his wife started has been awarded the $2 million Hilton Humanitarian Prize. He's joined by residents of Kibera, the neighborhood in Nairobi where his nonprofit group provides educational, health and clean water services.

In 2015, I heard about this made-up holiday called "World Kindness Day" and thought it would be interesting to talk to someone whose life had been changed by the kindness of strangers. A contact put me in touch with Kennedy Odede.

As a homeless kid in the slum of Kibera in Nairobi, Kenya, Odede stole a mango. A mob began beating him. A kindhearted middle-age man saw what was happening and paid for the mango. Later on a Catholic priest helped Odede go to a local school.

He went on to graduate from Wesleyan University and found a nonprofit called Shining Hope for Communities in 2004, based in Kibera. SHOFCO, as it's known, started out offering free education to girls and has expanded to provide health services and water to residents. I wanted to know how Odede and his group were faring.

It's not often that you ask someone "what's new" and the answer is $2 million and a baby.

Last week, Kennedy Odede's charity was awarded that impressive sum by the Conrad N. Hilton Foundation, which gives out an annual humanitarian prize. SHOFCO was cited for "providing critical services for all, community advocacy platforms and education and leadership development for women and girls."

That makes Bob Forrester, CEO of Newman's Own Foundation, very happy. The foundation has been funding the group since 2009. "They have a jewel of a school," Forrester says. "They employ just under 500 people. They're building a broader base of support. And Kennedy has this intuitive capability of knowing what will work and won't work inside Kibera."

Another thing that's new with Odede's group is a clean-water project. Since 2016, they've dug two wells and set up an aerial network of pipes — kind of like Roman aqueducts — to deliver filtered, chlorinated water to kiosks in Kibera to sell at a low price.

"It's a very innovative way of addressing scarcity of clean water," says epidemiologist Jennifer Verani of the Centers for Disease Control. She is part of a team evaluating the system to see if it delivers safe water and if there's an impact on diarrheal disease as a result. "We hope what we learn will help improve implementation in Kibera and inform potential replication in other areas," she says.

As for the baby — Odede and his wife, Jessica Posner, are the parents of a boy named Oscar Garvey, born on August 7.

In a freewheeling conversation, Odede brought me up to date on the two milestones in his life. This interview has been edited for length and clarity.

A baby and a couple of million. You must be thrilled.

We are very excited!

SHOFCO was your first baby. How is it doing?

We have 520 girls in the Kibera School for Girls and the Mathare School for Girls. We have a health care program with seven clinics and served over 200,000 patients in 2017. The first lady [of Kenya] gave SHOFCO a mobile clinic.

I understand the imperative of establishing a school for girls in countries where their educational needs may be neglected. But what about boys?

That's a good point. Now in my house we have a boy. I cannot let boys down. We have boys' clubs [at SHOFCO], we teach boys to be good men. I believe you cannot just empower women. Women need to have men who are strong and respectful. To leave boys out is not going to work well.

What does the money mean to you?

This money we are going to use as an endowment. With this endowment we are here to stay. SHOFCO is not going to end with Kennedy.

But it wasn't like you were a small organization. What's your budget this year?

This year we're budgeting for $7 million.

You are funded by grants and donations. Do you get money from the Kenya government as well?

No, we are working on that.

So now you're a powerful person. But you have humble roots – I read that you once worked in a factory and made $1 for 10 hours.

It was a manual job in a factory, carrying and unloading gas cylinders. Every evening you have to buy milk to clean your chest because it was burning [from carrying the cylinders].

Not to mention the mango incident.

I could have been one of the poor kids killed by mob justice. I was invisible, seen as useless, a poor person always arrested by the police.

It must be inconceivable now to be dealing with millions.

How Martin Luther King Jr. Changed The Life Of A Street Kid In Kenya

Now let's get to the really important news – your baby. So the middle name "Garvey" is in honor of the early 20th century black leader Marcus Garvey.

I used to think of this man when I was lonely, when I was down. Garvey was with the people, with the grassroots, one of the greatest organizers. So Garvey touched me in a special way. He was self-taught, he loved reading, Garvey gave me that idea that you can change your life by education, by searching for knowledge without having a teacher. If you are really lucky to go to school, thank God, but if you're from a slum or a village, you can still fall in love with books.

Garvey also started businesses for the poor. He wanted to give economical power to the less fortunate. When I read about Garvey, I was like, wow I love this man!

Is it a heavy burden for a child to carry such a famous name?

And what about the name Oscar?

I was in L.A. and dreamed I was riding a bike and we had a baby boy called Oscar.