Accessibility links
The Hidden Toll Of Conflict On Kids: An Estimated 5 Million Deaths In Africa : Goats and Soda A new study offers a novel way to measure how many children have really died as a result of conflict in Africa.

The Hidden Toll Of Conflict On Kids

The Hidden Toll Of Conflict On Kids 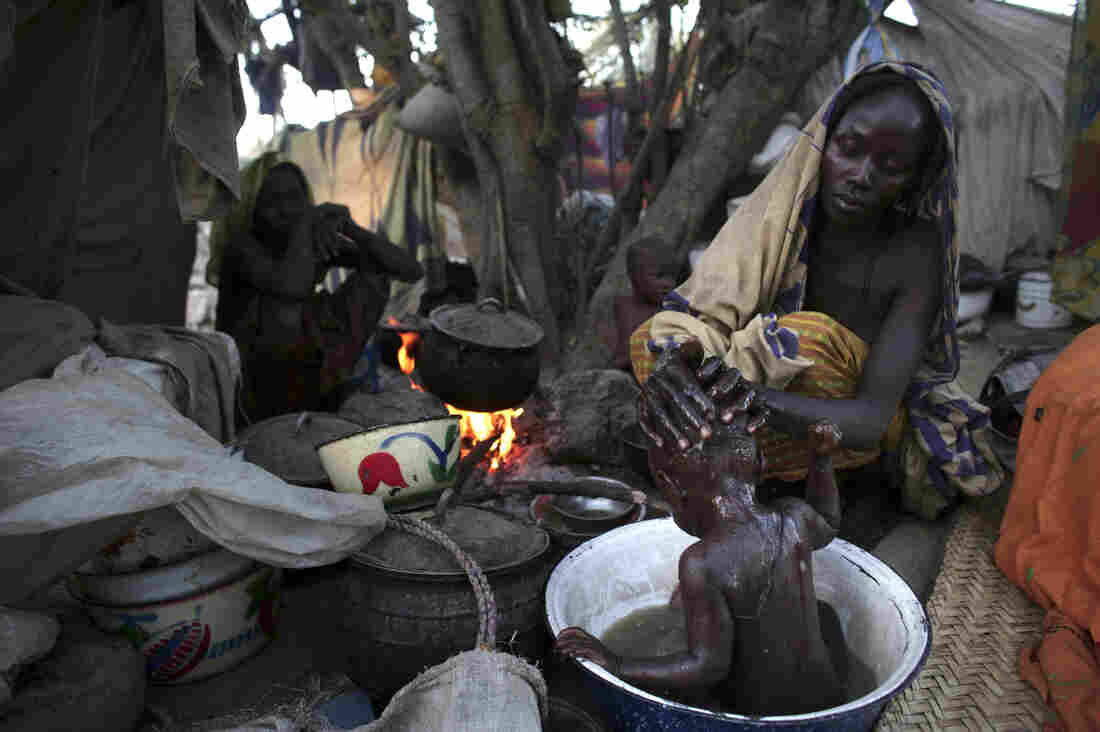 A woman from Chad washes her baby at a site for internally displaced persons. They had fled their village after an attack. Marco Di Lauro/Getty Images hide caption 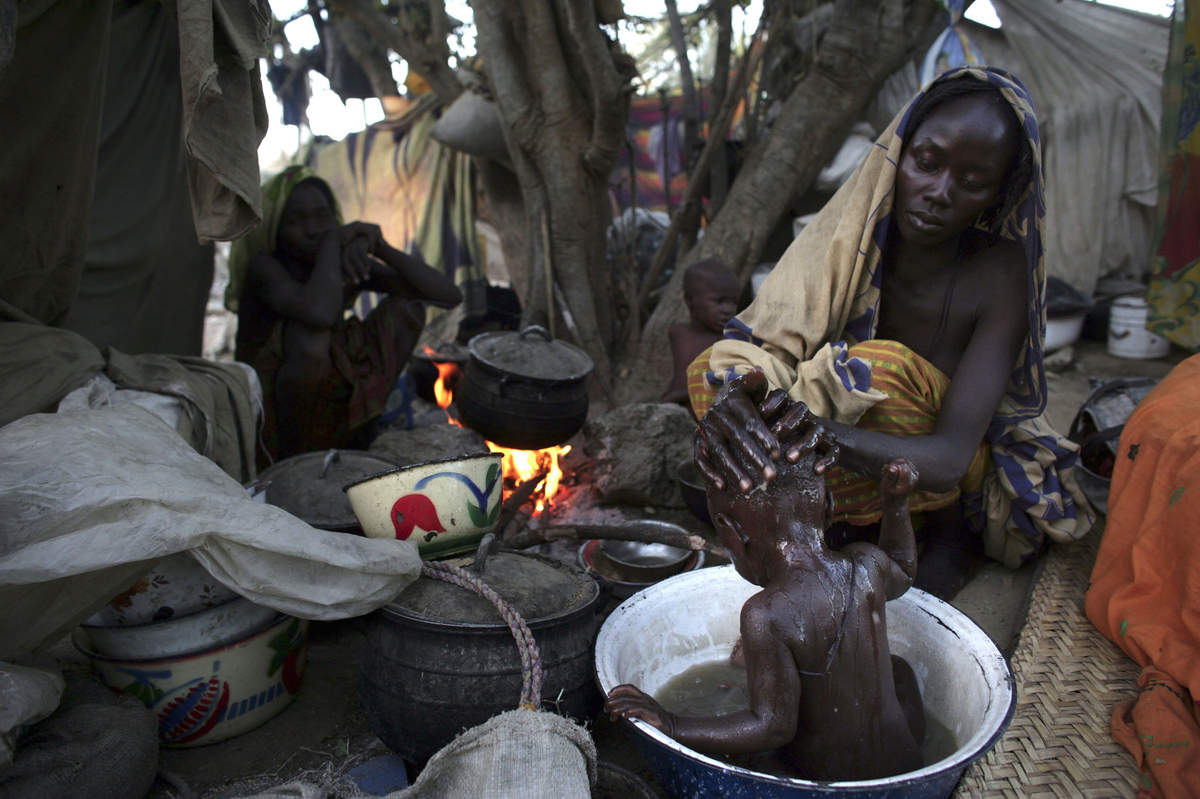 A woman from Chad washes her baby at a site for internally displaced persons. They had fled their village after an attack.

Over the last two decades, violent conflicts in Africa have likely resulted in the death of as many as 5 million young children — 3 million of them infants. That's the sobering estimate in a new study published Thursday in the journal The Lancet.

It's also a number that breaks new ground because until now, death statistics regarding war have generally been limited to counting the number of people — including combatants and civilians — who are killed directly by violence. For children that could mean a bomb falls on their house, say, or they are caught in cross-fire. But these direct death counts don't capture how most youngsters actually end up being victimized in a conflict, says Eran Bendavid, lead author of the study and a professor of medicine at Stanford University:

"The vast majority of direct deaths involve combatants. Only a fraction are civilians. And only a small fraction of those civilians are children."

Instead, he says, conflicts tend to exact their deadly toll on children indirectly. For example, the threat of violence can make it too dangerous for a pregnant woman to get to a hospital or health center to give birth, increasing the chances her baby will die in a complicated delivery. Basic sanitation infrastructure can be destroyed, so children end up drinking contaminated water which increases the incidence of preventable but deadly diseases like dysentery. People are forced to flee their farms, resulting in malnutrition, and effectively, death from starvation – with young children especially vulnerable. Vaccination and other health care gets disrupted, leading to the spread of deadly infectious diseases.

In fact, that last dynamic has been on display in the Democratic Republic of Congo this month – where a violent conflict between government forces and more than 20 active militias is making it difficult for health workers to address an outbreak of Ebola disease.

But how do you come up with numbers to illustrate the impact of all these disparate effects? Bendavid and his co-authors made use of a detailed data set compiled by Uppsala University in Sweden that has tracked the exact location, intensity and duration of more than 15,000 conflict events in 35 countries in Africa over nearly three decades. For each location identified in the data set, the researchers then looked up the numbers of child deaths reported in health statistics. Specifically they compared the number of deaths in locations where there was conflict to the number of deaths that would be expected based on death rates in those areas and neighboring locations during times there was no conflict. Then they determined how much the presence of conflict increases the chances of child death.

Here are three takeways from their findings:

• Violent conflict in Africa has been far more deadly to children than to armed combatants – and earlier estimates have vastly underestimated this impact.

Once the researchers had established how much a conflict's intensity, duration, and proximity increases the child death rate, they applied that formula to 54 African countries for which they had detailed conflict data. This allowed them to estimate of the total number of children who died as a result of conflict from 1995 to 2015 — in other words, the figure of 5 million child deaths. That's more than three times the number of people who were directly killed in those conflicts – again, most of whom were combatants.

The estimate also suggests that statistics that only look at direct deaths from conflict are substantially understating the problem. Arguably the most authoritative of these – called the Global Burden of Disease study – estimates that conflict accounts for less than 0.4 percent of child deaths in Africa. But factoring in the indirect effects would significantly increase this.

• The effect lasts long after the conflict is over.

Overall, infants born within 30 miles of an armed conflict were nearly 8 percent more likely to die in their first year of life than those born in the same region during years when there was no conflict. And in cases where the conflict was "higher intensity" – meaning more than 1,000 people were killed in combat – an infant's chance of dying was 27 percent greater than it would have been in peacetime.

These higher risks of mortality found in the study persisted for children born up to eight years after conflicts subsided.

• There are still all lot of unknowns.

Of those 5 million children who died because of conflict how many died of starvation? How many succumbed to diarrhea? How many were felled by measles? Unfortunately, says Bendavid, the researchers can't say. There are plenty of clues, he notes. In conflict areas there are higher rates of malnutrition among children and a greater incidence of mothers giving birth outside of health clinics, for instance. But the available statistics on child deaths often don't include the cause of death in enough fine grain detail to come up with an accurate breakdown of causes. It's one of a number of limitations of this study that need to be considered, the authors caution. Among others, it's hard to fully account for the effects of migration due to conflict, for instance. Or for how the impact might be exacerbated in places with decades-long conflicts such as Somalia or Sudan.