Accessibility links
In A Memoir, The Aunt Of The Drowned Syrian Boy Tells What Happened After The Tragedy : Goats and Soda The photo of the young child's body powered a surge of public concern for the refugee crisis. Now his aunt, Tina Kurdi, has written a memoir about her family's sorrows and hopes. 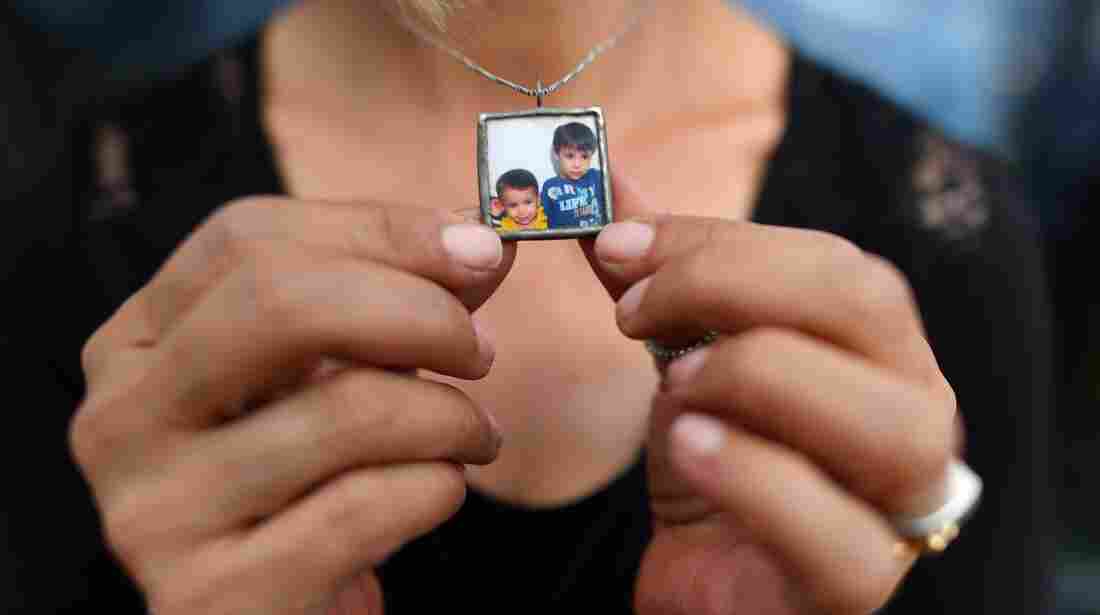 Tima Kurdi holds her necklace bearing a photograph of her nephews, Alan (left) and Ghalib Kurdi. She is the author of The Boy on the Beach: My Family's Escape from Syria and Our Hope for a New Home. Ben Stansall /AFP/Getty Images hide caption 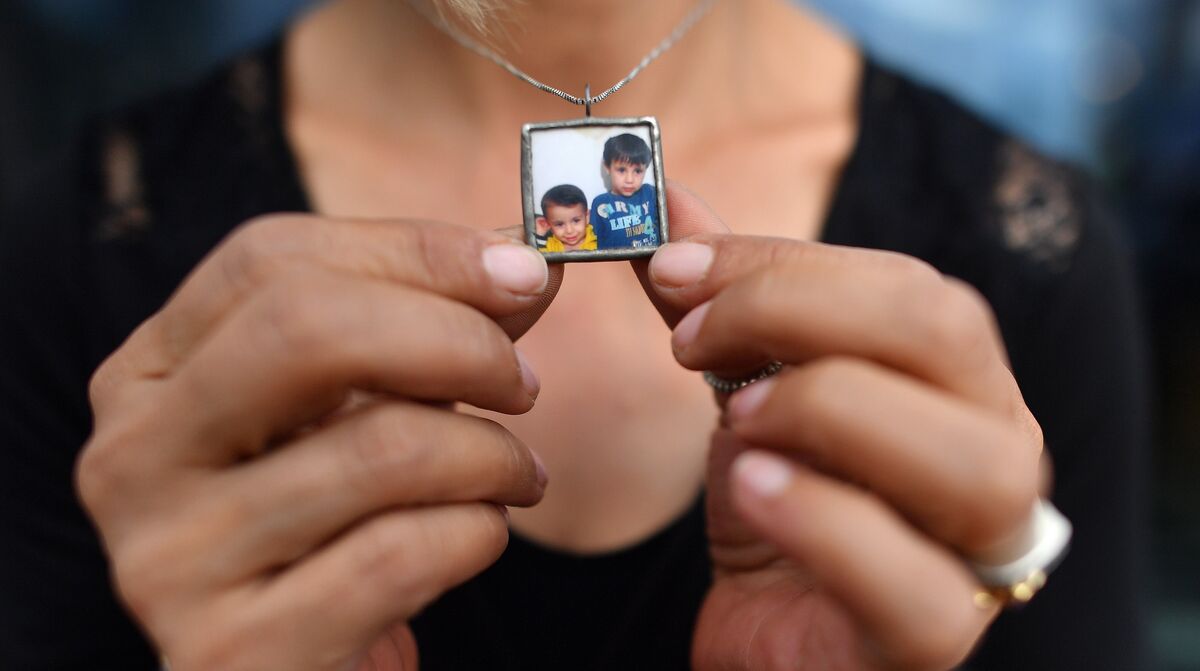 Tima Kurdi holds her necklace bearing a photograph of her nephews, Alan (left) and Ghalib Kurdi. She is the author of The Boy on the Beach: My Family's Escape from Syria and Our Hope for a New Home.

In 2017, we reported on the impact of the photo of the drowned boy on the beach, which stirred up public concern for the Syrian refugee crisis. A memoir by the boy's aunt details the family's struggles in Syria — and their fatal attempt to cross from Turkey to Greece in a rubber boat.

In September 2015, a photograph of a boy lying lifeless on a sandy shore powered a surge of public concern for the Syrian refugee crisis.

The boy, along with his parents and older brother, were on a rubber boat carrying Syrians who had fled the country's civil strife and hoping to find a new life in Europe. The vessel capsized on the way to the Greek island of Kos. Of the four family members, only the father, Abdullah Kurdi, survived. 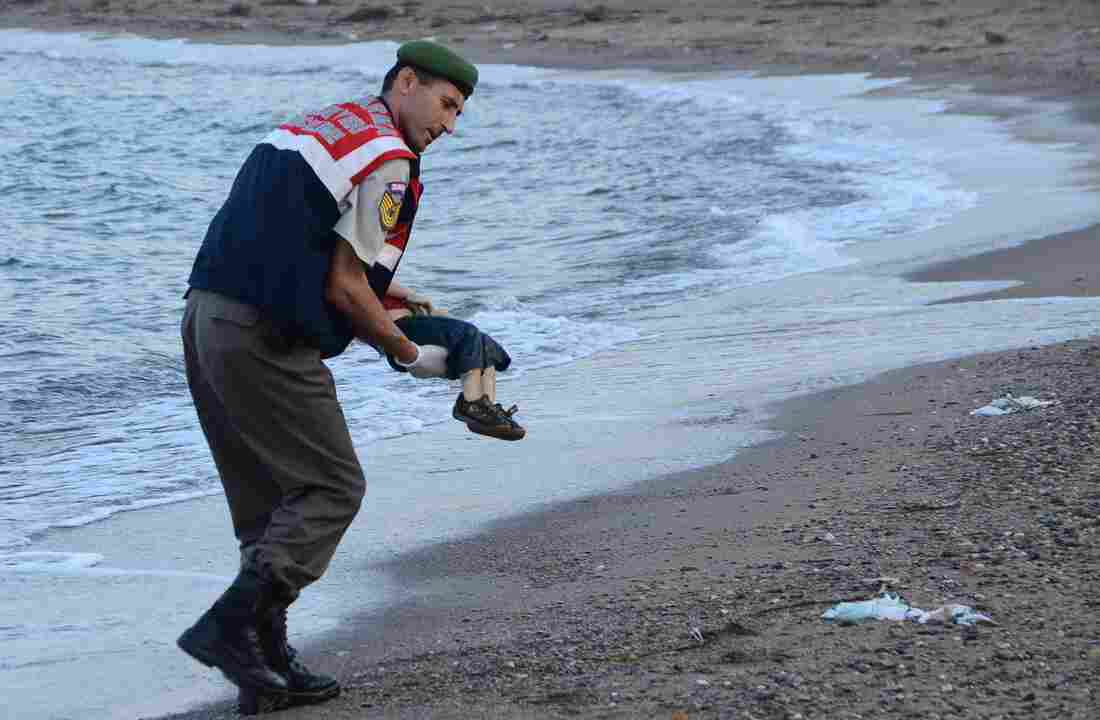 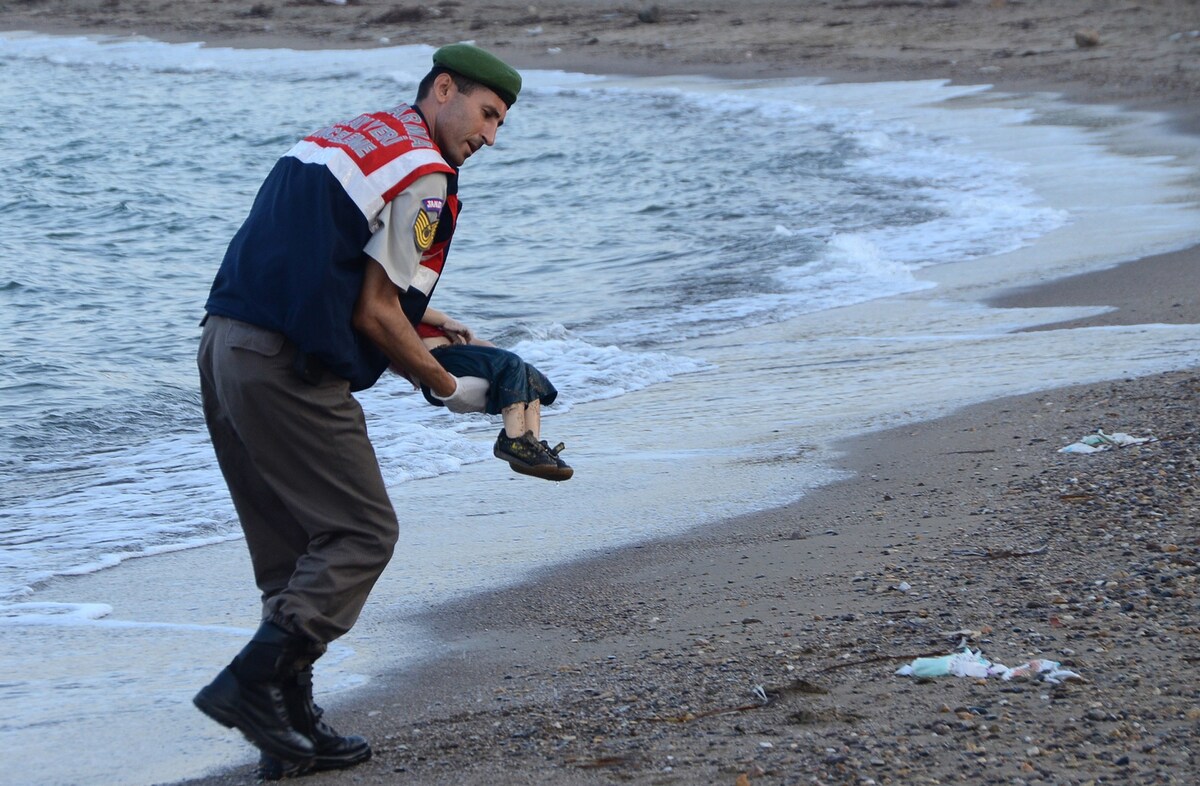 The image of that small corpse on the beach led to an outpouring of charitable donations to aid other refugees. We subsequently reported on a study that examined the impact of the photo.

Now the toddler's aunt, Tima Kurdi, has written a searing personal portrait of the impact of the Syrian civil war on her family.

Her newly published memoir, The Boy on the Beach: My Family's Escape from Syria and Our Hope for a New Home. describes the Damascus community where she and her siblings grew up in a comfortable home on a jasmine-scented street and contrasts that with the subsequent disintegration of the country and the plight of her family in the wake of the civil war.

She herself immigrated to Vancouver, Canada, in 1992, where she resides today, but she had seen the start of the civil strife on a family visit home in 2011. Then as now, she remains in close touch with her family. We interviewed her via Skype from Turkey, where she was visiting her sisters. The interview has been edited for clarity and length.

How do you feel about the tremendous exposure the photo received? 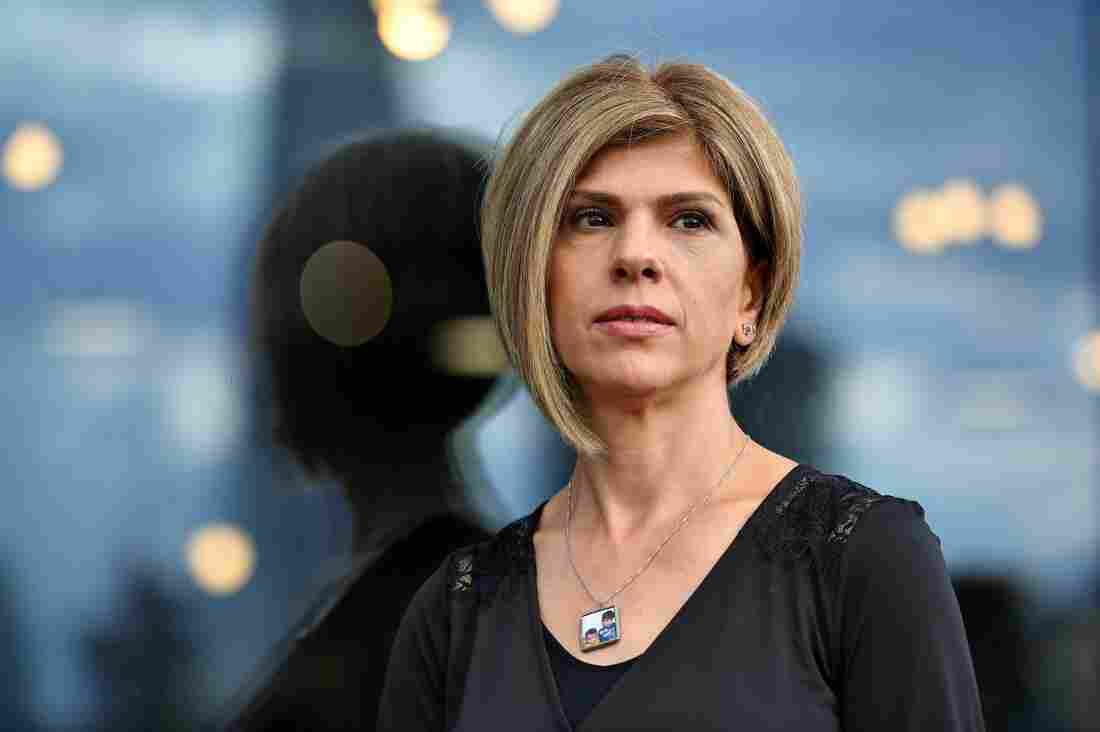 Tima Kurdi is the aunt of Syrian refugee Alan Kurdi, who, along with his brother Ghalib and their mother Rehanna, were found drowned on a Turkish beach in 2015, after the raft they were traveling on capsized. Ben Stansall /AFP/Getty Images hide caption 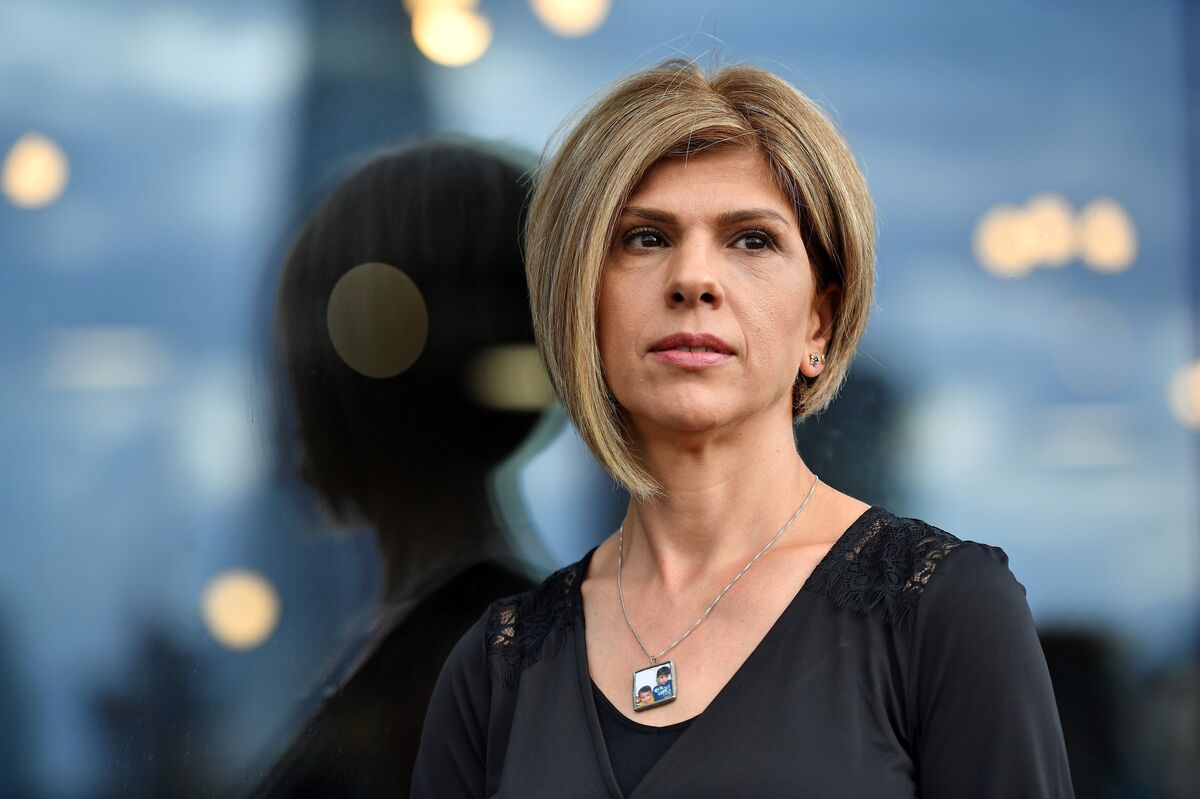 Tima Kurdi is the aunt of Syrian refugee Alan Kurdi, who, along with his brother Ghalib and their mother Rehanna, were found drowned on a Turkish beach in 2015, after the raft they were traveling on capsized.

People opened their hearts when they saw the suffering in that image. It made them think, what if this happens to you, if you lose everything, your home, your country, you have no safe place, no food, no money and what will you do? It has become a permanent reminder for people to help others, that we all need each other and that we are all one.

But I need to correct the record. My nephew's name is Alan [not Aylan, as media outlets, including NPR, reported.] And when he died, Alan's age was 2 years and two months, not 3. His brother's name was also misspelled. It is Ghalib, not Galip. 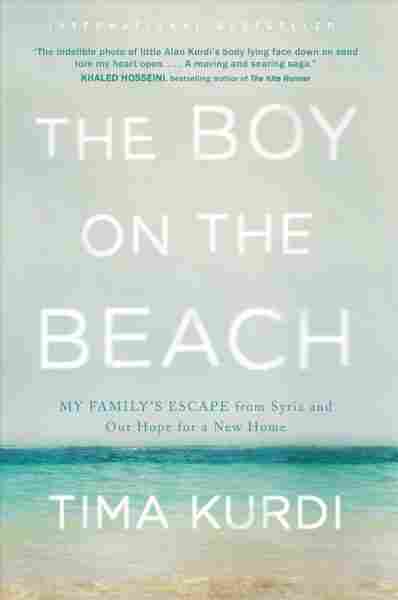 The Boy on the Beach

You write about how close your family was. Where are your siblings and their families now?

My family did not want to leave Syria, and at first they went to the north [to the city of Kobani] thinking the situation would get better and they would come back later. But it kept getting worse. One day, two of my nephews were playing soccer outside and suddenly a suicide bomber blew himself up. These children witnessed the body pieces falling all over the street. Fifteen relatives were massacred in the Ramadan attacks in June 2015. One by one my family started to flee.

Today, my sisters Maha and Shireen are in Izmit, Turkey. My sister Hivron made it to Germany with her family. My brother Muhammad and his family are in Vancouver [the Canadian government finally accepted Tima's sponsorship]. Abdullah was given asylum and lives in Erbil, Kurdistan [in Iraq]. My father is still in Syria.

How difficult was it to write this book?

Sharing my private family story with the world was not easy, but I go out and tell my story to inspire and remind people that the boy on the beach is one person only, and there are so many others who are suffering.

It has been healing to write, but I cannot let go of the guilt I feel for paying for the smugglers [whose boat overturned in the waters between Turkey and Greece]. I will take that guilt to my grave. I gave the money to help Abdullah and his family, but I feel that maybe if I had not paid that $5,000, maybe they would still be alive.

How is your brother Abdullah coping?

He says, "I lost everything in my life."

But he is finding some healing through bringing aid to refugee children in displaced persons camps, through a small charity we have set up, the Kurdi Foundation. We focus on their education, because Abdullah says he wants to give these children what he couldn't give his own.

When we go to a refugee camp, the parents are so heartbreaking. They tell us "the world is talking about us but no one comes to talk to us." The kids have to make their own toys ... they will roll up a T-shirt and tape it in a round shape and that is their ball and they are happy.

Why did you sprinkle Arabic phrases throughout the book, with chapter titles and other words appearing both in Arabic script and English transliteration?

My family does not speak English, but when I showed them the book [on my visit to Turkey] they were very happy, saying, oh my God, the title is in Arabic! It is a touch that lets readers know that they are with my family, that we are all together. I am hoping that the book will be translated into Arabic. I would love that, and my family could read it.

How are readers responding to the book?

I feel I am helping change people's minds. One man wrote me that he was very angry to see so many refugees come to his country and taking away jobs, but after reading the book he sees things differently. He said, "You reminded me that if something happened to me, I would be in that same situation. So from tomorrow morning on, I am going to have at least one hour to do something good, to volunteer and help [refugees]."

Another man sent me a photo of a jasmine plant he has put on his balcony, like the jasmine I describe in the book. He wrote, "I bought that plant to remember your book and to push me to go out and go help others."

How would you summarize the book's message?

The point of view throughout the book is that of the refugees. I don't take political sides, I focus on the people. They want to go home to rebuild their lives, but for so many of them there is no home to go back to. I want to be the voice of those who cannot be heard. There are many, many stories. If I could write all those people's stories, I don't know how many books I would have to write.

Read an excerpt of The Boy on the Beach