Accessibility links
Million Dollar Hult Prize Goes To Students With Best Plan To Improve The World : Goats and Soda The Hult Prize goes to a team of student entrepreneurs with an idea that will make the world a better place. Former President Clinton was on hand to announce the winner.

It's Rice Vs. Seaweed Vs. Solar ATMs For A $1 Million Prize

It's Rice Vs. Seaweed Vs. Solar ATMs For A $1 Million Prize 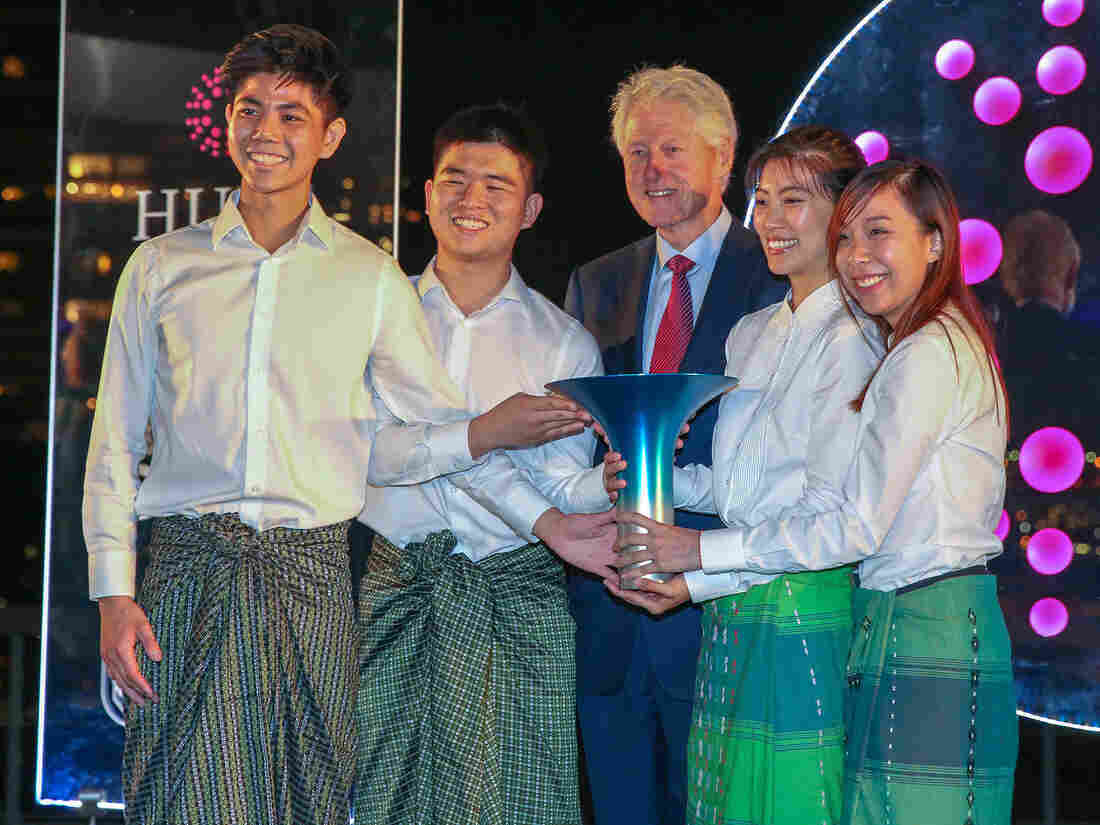 It may not sound like a hot ticket, but on a balmy Saturday night at the United Nations earlier this month, a throng of smartly dressed millennials from around the world piled into the elegant, tiered rows of the United Nations Economic and Social Council chamber.

They had come to see who would win the $1 million dollar Hult Prize, a winner-take-all award that would go to just one team among six who had spent the previous nine months putting together environmentally-friendly business projects aimed at doing good in the world.

A number of those in the audience of several hundred had themselves been among the semi-final cohort of 18 teams that had competed for the prize. They were among approximately 100,000 college and graduate students from 121 countries who had presented their ideas in early stages of the competition — but had not made the cut to the next round.

Rather than letting that deter them, they came to cheer on the finalists — and also network with their fellow budding entrepreneurs, all of whom shared a commitment to running socially conscious business projects in developing markets.

This was the ninth annual Hult Prize finals, sponsored by Hult International Business School and funded by the Hult family, whose patriarch, Bertil Hult, founded EF Education First. Each year the prize provides seed money for start-ups designed to improve lives. This year's challenge asked participants to build a social enterprise that would use "energy innovations" to transform the lives of 10 million people by 2025.

Now it was time for the final teams to go to bat to nail the prize itself. Their task was to persuade the judges, in polished six-minute long presentation and respond on the spot to any queries the judges might pose. Power point slides and technical explanations made for some wonky moments. But the teams remained poised, idealistic and passionate, with an eye on the bottom-line.

U-Light, from the American University of Sharjah, U.A.E? They spoke winningly of lighting up the world for those suffering frequent power outages or who have no electricity at all via crank-powered batteries — a technology so old fashioned that it is also sustainably new.

In a similar vein, Empower Energy, from University of Oxford, envisions solar charging stations (which they dub solar ATMs) where villagers in rural India could rent LED lamps and battery packs from shopkeepers.

Surely the most out-of-the-box (or, um, out of the sea) thinking came from Phyta, from University of North Carolina at Chapel Hill: the only all-female group in contention. They propose starting seaweed farms in coastal areas, with the harvested seaweed used in alternative plastic, feed and personal hygiene products.

Impact Rays, from the International Islamic University of Malaysia, aims to help 86 million low-income farmers in Nigeria with a solar-powered automated irrigation system that would save water and increase yields.

Or SunRice, from University College, London, whose plan promises to increase rice production in Southeast Asia and raise the incomes of rice farmers. They would accomplish this through the use of energy efficient rice-drying and storage technology.

After the presentations, it was time for the judges to confer and decide. The prestigious group included former President Bill Clinton (the Hult Prize was previously associated with the Clinton Global Initiative); Earth Day Network president Kathleen Rogers; former U.N. assistant secretary general Elizabeth Thompson and a variety of business entrepreneurs, corporate executives and leaders of nonprofit organizations.

Finally, Clinton stepped to the podium to announce the winner. As he emphasized the urgency of responding to climate change, the implication was clear: These Hult Prize innovators better get to work. And the winner was ...

SunRice, whose team members include Lincoln Lee, about to turn 21, from Malaysia; Kisum Chan, 20, from Hong Kong; Julia Vannaxay, 23, from Laos and Vanni Koay, 22, from Malaysia. (Because there is already a company named SunRice, the team plans to change its name.) 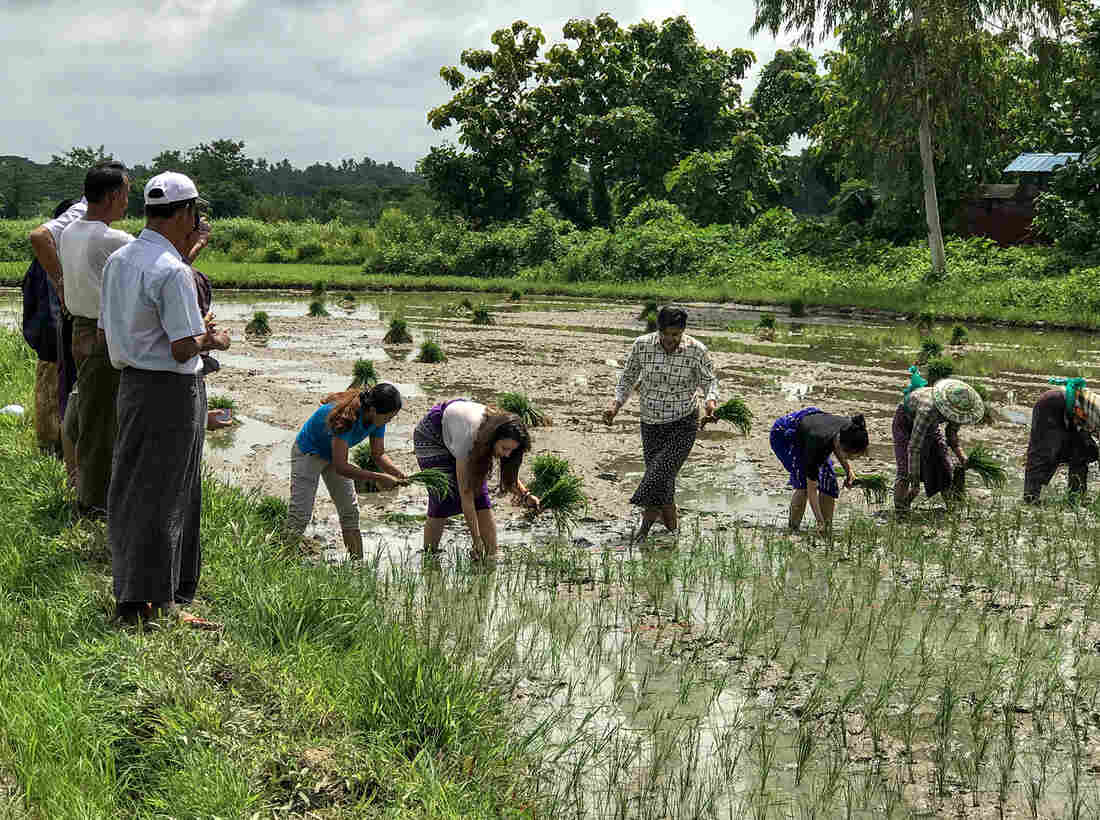 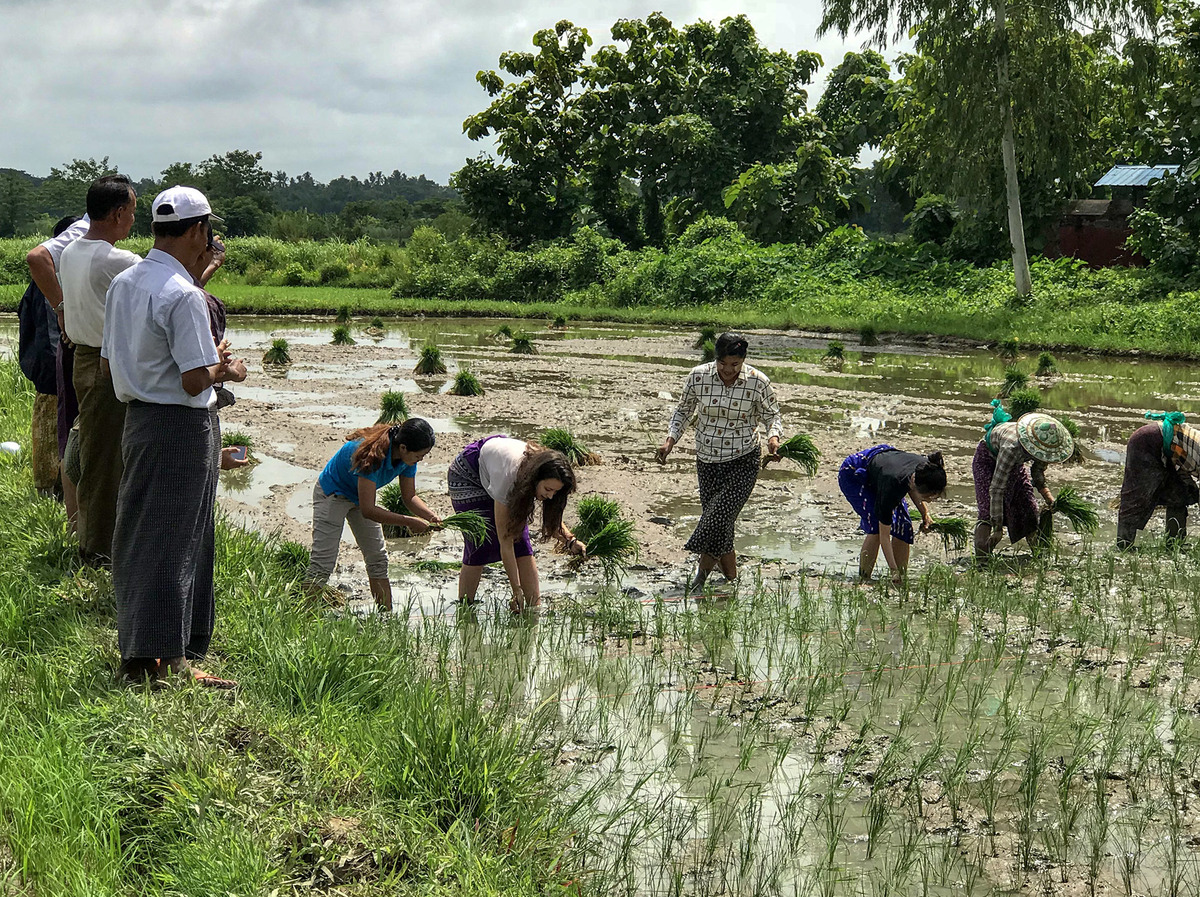 Members of the SunRice team help farmers in Myanmar transplant rice saplings into a paddy field.

"We're all from Asia, and rice is a staple of our diet, as it is throughout Asia," says Lee. So when they learned that up to 30 percent of rice from underdeveloped regions goes to waste, they wondered how that could be – and how they could change that.

Through their research they further discovered that 70 percent of all rice is produced by smallholder farmers — defined as owning less than 10 acres of land — and that the majority do not have access to rice-drying machines that could reduce losses by about 20 percent. They also learned that the ability to store the dried rice will allow the farmers to sell it off-season, bringing in a higher price than selling it immediately after the harvest, when prices will be lower due to the glut on the market.

There is also an energy-efficient benefit to using rice dryers: The rice husks that are a natural waste product of the drying process can be recycled as fuel.

But how to give these farmers the access to the costly technology – constructing and installing a single drying machine costs about $10,000.

The team pledged to take on the financial risk of buying dryers and storage units themselves and over time will collect commissions from the farmers that would reimburse the team for the technology and keep the enterprise going. So far, SunRice has been partly funded by other competitions they've won and by their university.

In putting their plan together, the team had interviewed close to 100 farmers in the Bago region of Myanmar. Now it's time to see how well the plan will work. They've already financed the building of one rice dryer, whose construction was completed on the very day of the Hult Prize finals, and are planning to be in Myanmar as the farmers in that village began harvesting the rice. Having not yet run on-the-ground trials, the team is eager to go forward with the project.

With the Hult Prize money itself, the team plans to build more dryers and more storage to expand the program, while also working closely with the farmers and agricultural experts. Dazed by the win, Chan says it was "surreal and unbelievable and we are super-grateful" and acknowledged that "every one [of the finalists] deserved to win."

Hult Prize Founder and CEO Ahmad Ashkar had himself said as much at the start of the evening, commenting that any of six teams was worthy of the prize. What made the rice team stand out? "This business is going to radically change everything we think [we] know about rice trade," he says, "and I am excited about the potential impact their company will have on society and the prospect of building out the world's first socially responsible rice brand."

As a footnote, the team had some unusual garb as they accepted the prize – sarong-like traditional Myanmar attire called longyis. When the team visited Myanmar, says Chan, the farmers "told us we should wear [longyis] everywhere, and we had the idea of wearing it" during different rounds of the Hult Prize competitions, including the finals.

"When the farmers in Myanmar saw this," he says, "they were very happy that we were embracing their culture and sharing it with the world."