Accessibility links
Activist Runs Around N.Y.. To Put The Plight Of The Rohingya On The U.N. Agenda : Goats and Soda Hassan Abedin is on the go at the U.N. General Assembly trying to get diplomats to focus on the plight of the Rohingya refugees from Myanmar. "My Fitbit is just screaming," he says. 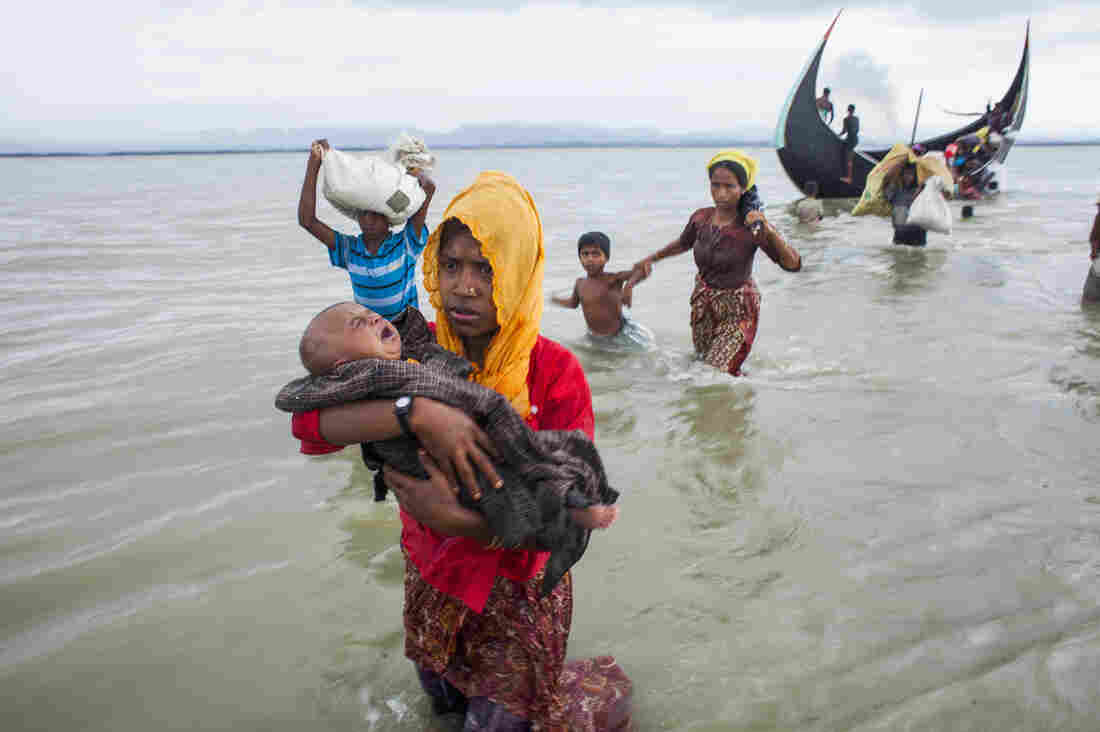 the U.N. says the Rohingya are "the most persecuted minority in the world." Above, refugees cross a river to a temporary camp after crossing from Myanmar to Bangladesh. Ahmed Salahuddin/Getty Images hide caption 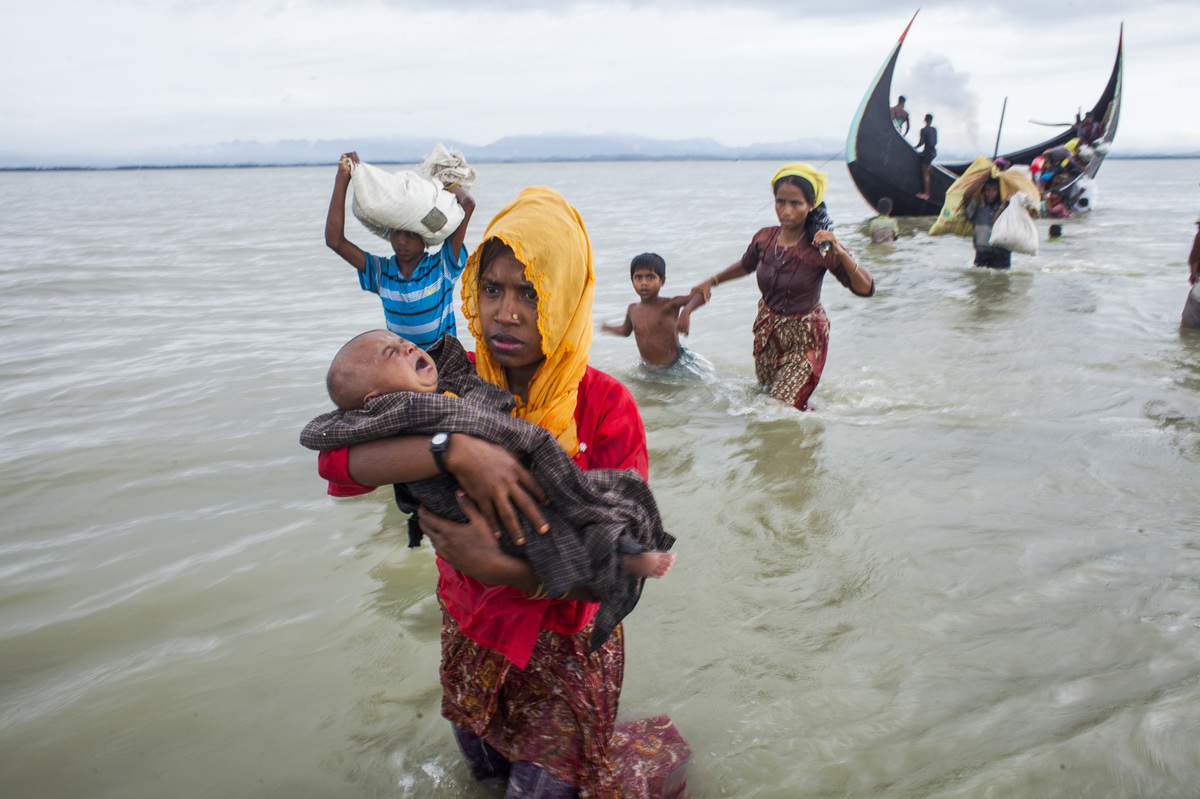 the U.N. says the Rohingya are "the most persecuted minority in the world." Above, refugees cross a river to a temporary camp after crossing from Myanmar to Bangladesh.

The United Nation's annual general assembly is currently underway in New York. The gathering is a smorgasbord of meetings. There are high-level meetings and bilateral meetings and side meetings. There are sessions and special sessions and emergency special sessions. Leaders from around the globe with their coterie of ministers and sub-ministers descend on midtown Manhattan to tackle the world's problems.

It's an opportunity to lobby on global issues from rights of native peoples to climate change to nuclear disarmament.

Hassan Abedin came to try to galvanize a solution to the Rohingya crisis in Myanmar. His goal this week is to highlight the plight of what the U.N. Human Rights Council has called the "most persecuted minority in the world." Hundreds of thousands of Rohingya who've been driven out of Myanmar are now living in sprawling refugee camps in Bangladesh.

A 10-Year-Old Kid Is Making Magic With His Kites

Despite how dramatic the exodus of Rohingya was from Myanmar last year, getting world leaders to focus on them now is not easy."The challenge is to be everywhere at all times," the 55-year-old Abedin says. "You want to catch ministers and heads of delegation. There so many meetings that are happening on humanitarian issues. You're literally rushing around. I mean my Fitbit is just screaming." It clocked 25,000 steps earlier this week, more than double his daily average.

"You're just trying to get two minutes with a minister to say, 'Please in your talking points, remember the Rohingya,'" he says. Abedin who is based in Istanbul is the head of the Muslim Minorities Division with the Organization for Islamic Cooperation. "Then you're running across New York traffic to another building to catch another senior official who's holding a meeting on humanitarian issues to say, 'Please make sure that you have enough money allocated for education for [Rohingya] women in the camps.'"

Recent reports from the U.N., the U.S. and human rights groups have documented an orchestrated effort by the Burmese government to expel the Muslims from predominantly Buddhist Myanmar. The U.N. accuses members of Myanmar's military of crimes against humanity and operating with "genocidal intent" last year when soldiers attacked Rohingya villages.

"We are here to make sure that issue is not forgotten," Abedin says of colleagues from the OIC who joined him in New York. "And that the humanitarian aid delivery increases and also that pressure is brought to bear on the powers that be to ensure the Rohingya receive the justice that they deserve."

Aid and justice have been in short supply for the Rohingya. Humanitarian groups including U.N. agencies are attempting to raise nearly a billion dollars to address the needs of the 900,000 Rohingya refugees in Bangladesh. But so far they're only raised 34 percent of their goal.

It's not that there haven't been high level meetings about the Rohingya at the General Assembly this year.

There have been discussions about how to deal with what is now the largest refugee camp in the world just outside Cox's Bazar Bangladesh and talks about how find a way for the Rohingya to return to Myanmar.

"Last year she also did not attend the General Assembly. And I think there's a pattern there that perhaps she doesn't want to face the international community's concerns," he says. "This is consistent with the [Myanmar] government's strategy of denial, discredit and deflect."

Sarah Margon, the Washington director for Human Rights Watch, who's been active in calling for justice for the Rohingya, says, "keeping this on the forefront of diplomats' agenda is really difficult when the world is in such a state of upheaval."

The Rohingya refugees have to compete for attention with Syrian refugees. There's the conflict in Yemen, the meltdown in Venezuela and the latest Ebola outbreak in the Democratic Republic of Congo.

"With so many large-scale crises," Margon says. "It's hard to get and secure and maintain the attention of a global leaders." To make sure the Rohingya are not forgotten and trapped in camps in Bangladesh, she says the issue needs to be pushed on multiple levels.

"In the most simplistic form, it does require people running around to get the attention of global leaders when they're all gathered at the U.N.," she says. "It also requires ongoing attention from the media. It requires ongoing research from independent organizations and the United Nations to track, monitor and document the evolution of the crisis."

Abedin is focused on the first part of that strategy. This week even the weather appeared to be conspiring against "the most persecuted minority in the world."

"The weather in New York this past couple of days hasn't been easy," Abedin says about racing from one event to another at the U.N. General Assembly. "The downpours have made sure that we're drenched to the bone at the end of the day but that's nothing compared to what these refugees have experienced. It may sound rather clichéd but you're motivated by a sense of duty to give voice to the voiceless."